EDITORIAL: The New San Gabriel Mountains Management Plan is a Step in the Right Direction

What follows is a version of our official public comment on the San Gabriel Mountains National Monument’s draft Management Plan. You may read the original document and register your own public comment through November 1st on the Forest Service project page, and we strongly encourage you to do so.

Chances are, if you’ve spent enough time hiking in the San Gabriel Mountains, you’ve probably formed some opinions on things.

Very rarely do we as hikers have the opportunity to express our desires and dreams for the direction of a huge swath of public land and actually have those thoughts read, analyzed, and considered by the Forest Service. We have one of those chances right now.

Since the San Gabriel Mountains National Monument was declared in 2014, we’ve covered the long and sometimes confusing process of the Monument’s new Management Plan. It’s been a lot of work but a tremendous opportunity to shine a light on a very public and open process that is too often ignored by media (and let’s be honest: decoding an enormous government document doesn’t always make for the most exciting read).

In our breakdown of the draft management plan, we were inspired by the tremendous forward-thinking, progressive tone the Forest Service took. Perhaps the most striking part of the new plan is its Transportation component.

It is unusual for any agency in Southern California — let alone one that has such a large geographic area of jurisdiction — to come out and say one of its goals is to reduce the overall number of automobiles. It is heartening to see the Forest Service tackle the seemingly untouchable third-rail of L.A. politics (that’s a mass transit reference, motorists) head on.

Perhaps most visible to people recreating in the San Gabriels were the rail-to-trails shuttle programs linking places like Fish Canyon and Chantry Flat with the Metro Gold Line system. Chantry Flat, in particular, has a long and well-deserved reputation as a total nightmare to park in, and we strongly support the continuation and expansion of programs like this. In addition to making it easier for people with automobiles to park away from crowded trailheads, connecting trailheads to our growing mass transit network allows people without cars to get to areas of public lands that were previously inaccessible to them.

We want to see more connections to front country trailheads and would love to see more areas outside the Monument boundary serviced as well, beginning with places that have limited or overcrowded parking. Long term, a shuttle to the interior of the San Gabriels would be an incredible addition for those looking to get to popular areas like Switzer’s and to provide more access to the high San Gabriels along the Angeles Crest Highway, but we agree that the more popular frontcountry should be serviced first — and although free shuttles are great, we think most people would be willing to pay a fee to use these services, too. (Reminder: Voting YES on Measure M in L.A. County will help funds programs like these!)

The second part of the Forest Service’s transportation plan seemed to be focused on shifting attention from currently crowded areas to areas they referred to as “underused.” While we agree that there are huge swaths of the San Gabriels that hardly see any visitors, we want to make sure that the new users who are entering these regions are properly educated in backcountry and wilderness ethics and safety and know how to use these resources responsibly.

This brings us to the Sustainable Recreation component of the draft management plan. Since we first started writing about hiking in L.A. in 2006, one of our central messages has always been about getting people outside to enjoy and explore their public lands — but we have also stressed an educational component to our trail information so that people don’t just know the mechanics of how to get to a trailhead and where to go once they get there, but they also know why these places are special and why they’re worthy of being treasured and protected.

It is important that the Forest Service find some concrete ways to allow for increased use while also instilling conservation values. We know that the Forest Service is working on a Conservation and Education Plan in addition to the Management Plan, but we would like to see at least a framework in place for the Conservation and Education Plan. Increasing the Field Ranger program, installing more multilingual informational kiosks, and encouraging new visitors to begin their San Gabriel experience at one of the existing visitor centers for some face-time with Forest Service or volunteer staff could be good first steps.

We also applaud the Forest Service’s direction in the Social and Environmental Justice section of the plan, which calls for adjusting the Forest Service’s tactics and communications to include and reach out to the population that leaves near and recreates in the San Gabriels. 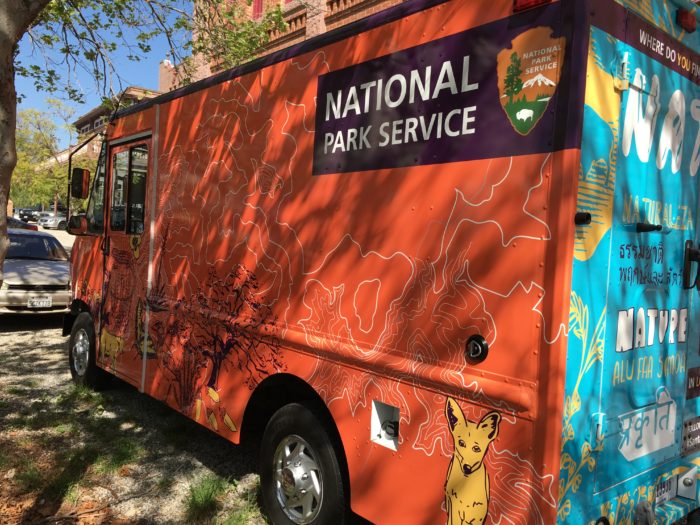 It should come as no surprise that Southern California has some of the most diverse outdoor audiences in the country. Many outdoor organizations have already done some excellent work in reaching out to these generally under-represented or even ignored groups and could serve as models for the Forest Service as it joins suit. Multilingual and even non-English-only programs have already been done with much success; groups offer busses from park-poor neighborhoods in the greater L.A. region to areas of wide open space; and engaging forms of communication from active social media to unique programs like La Ranger Troca show that despite its reputation as the city that paved over paradise, L.A. is actually home to some exciting new thinking in the world of outdoor recreation and awareness.

This new management plan comes at a time when that outdoor awareness is bleeding over into a totally new audience. Places like the Natural History Museum of Los Angeles County are reframing what wildlife means to people who grew up in the city. The drought is bringing increased awareness to organizations like the Theodore Payne Foundation and the Hahamonga Cooperative Nursery as more and more people learn about the unique native plants that provide food and habitat to our ecosystem. Exhibits like the Autry’s California Continued use the under-told story of Native Californians as a way to move toward a more responsible and sustainable future for the region. All of these places (and many more I’m sure we’re missing) should be used as inspiration for brainstorming sessions for ways the Forest Service can join the conversation and amplify these messages in the San Gabriel Mountains. 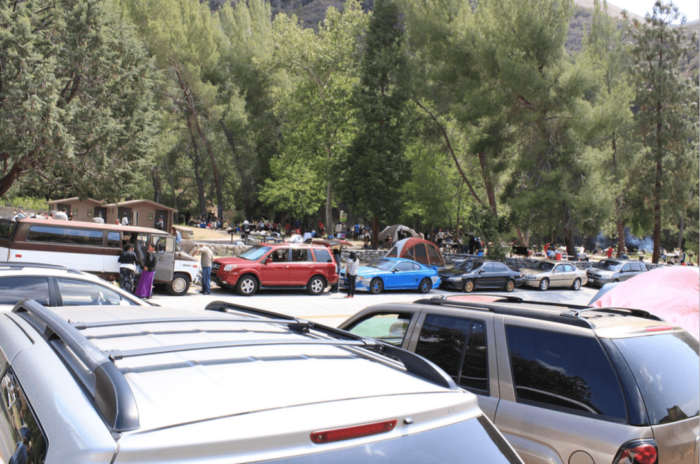 Renovations like the multilingual interpretive signs, new nature trails, family picnic areas, and efficient parking at the Oaks Picnic Area along the East Fork of the San Gabriel River are a step in the right direction and should be mirrored in other areas. Studies found that visitors were significantly more likely to follow the rules about litter and rock dams in this area when outreach was done to them — specifically in the form of in-person volunteer information and patrols and multilingual signs that spoke about the sensitive habitat nearby. It is important that the Forest Service install more wayfinding and interpretive signs, especially at heavily used trailheads.

This improved availability of information should also be reflected in the Forest Service’s online offerings. In addition to having a good social media presence, the Forest Service web site for the Angeles National Forest and San Gabriel Mountains National Monument is in dire need of a modern overhaul and has been for quite some time. Although some specific sections are getting better, relevant information needs to be presented in a way that is clear and easy to find — especially for people who may not be as skilled at navigating the maze of Forest Service web sites as frequent hikers and backpackers have to be.

We are excited that the Monument process has sparked an effort to catalogue and preserve not only the natural resources of the San Gabriel Mountains, but also the historical ones. For many hikers, some of the most memorable and inspiring moments in the San Gabriels come when you first encounter some of the amazing history there — whether it’s visiting the ruins at Echo Mountain, seeing the cabins in Icehouse or Santa Anita Canyons, or laying eyes on the Bridge to Nowhere for the first time. As the Forest Service steps up its interpretive game, we look forward to having more information available to the public on the human history in the region. Perhaps the Headquarters could host small rotating exhibits or artwork like the Santa Monica Mountains Visitor Center does — and it would be nice to have more formal connections with outside experts to lead their own talks or programs at the Headquarters, whether they be on history or plants or wildlife or Native American culture. 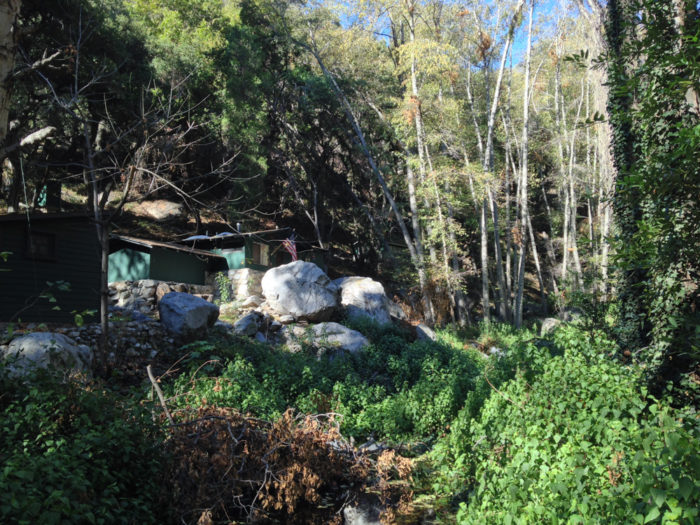 The Plan does leave a few things out or unclear, and we feel the Forest Service would do well to clarify these issues moving forward. Many groups have criticized the plan for failing to present metrics for judging failure or success on these ambitious initiatives. While we understand that those metrics may already be established in another plan, for clarity’s sake we suggest they be implemented or at least referenced in this management plan. Are there target goals for users in the Monument who didn’t use a car? Who utilized official Forest Service web sites or information? Concrete measures of decreased litter or vandalism? Attendance at visitor centers? If so, the Forest Service should be open about their targets — even if those targets may be dependent on funding that has not yet been secured.

We would also like to see some sort of clear communication about other forms of recreation in the Monument and what is and isn’t allowed. While we want to make sure that as many people as possible are able to use the San Gabriels for their preferred form of recreation — whether it be target shooting, hunting, fishing, joy-riding, mountain biking, bungee jumping, or something else — it is important that those activities be done in a way that doesn’t damage the landscape or cause other problems. 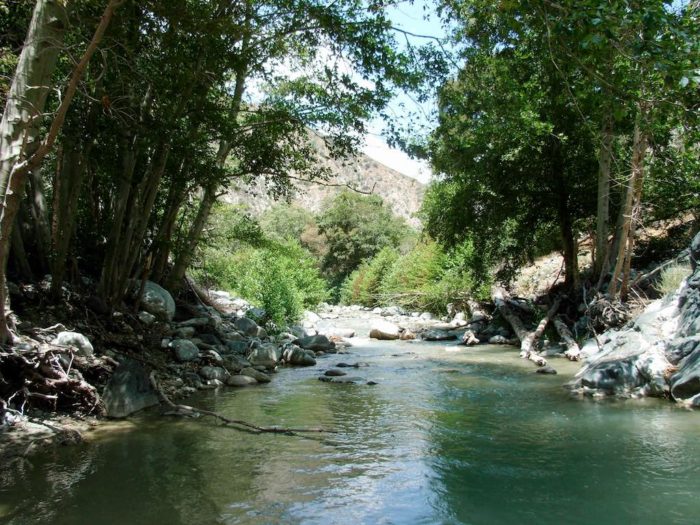 A calm stretch of the San Gabriel River

Much has been written, for instance, about the prospecting community that frequents the East Fork of the San Gabriel River. The Forest Service web site seems fairly clear that this activity is not allowed in this canyon, but the activity has continued unimpeded for years. If prospecting is, indeed, allowed in this canyon, then it needs to be monitored and regulated so the community doesn’t cause damage to the sensitive riparian habitat. If it is not allowed, then the Forest Service needs to put an end to this activity and inform the community where they can prospect instead.

Overall, we are extremely excited for the future of the San Gabriel Mountains National Monument. We think the draft Management Plan is a tremendous step in the right direction for the San Gabriel Mountains, and with a few edits to clarify certain sections and provide some ways to measure the success of these ambitious goals, the plan will ensure this special place remains a vital and accessible part of the Southern California landscape for generations to come.

The deadline for public comment on the new San Gabriel Mountains Draft Management Plan is November 1st, 2016. Comments can be issued via writing or online at the Draft Plan’s web site.