The National Park Service has posted a detailed plan on the feasibility of incorporating the Angeles National Forest and the Puente-Chino Hills into its stewardship (PDF), and the news is pretty good.

When looking at recommending acquiring new land, the Park Service asks several questions:
1. Does it possess nationally significant natural or cultural resources?
2. Is it a suitable and unique addition to the system?
3. Can it be feasibly added to the system?
4. Does it require direct NPS management, instead of stewardship from other groups or a public-private combination?

The Park Service answered every question with an affirmative, noting what we San Gabriel hikers already know – the Angeles National Forest has a fascinating, unique, and diverse geology; high levels of biodiversity; dynamic river systems – some of which are eligible for “Wild and Scenic River” status; and significant historical and cultural value.

While they said the ANF-Chino Hills combination could not be suitably run by the National Park Service alone, the entire Angeles National Forest area could be co-managed with the Forest Service, and that the combined area, along with outlying areas of note could also be incorporated into a sprawling public-private National Recreation Area, similar to the Santa Monica Mountains National Recreation Area to its west.

The NPS put forth several alternative proposals instead of making the entire region a giant National Park:

1. The establishment of the San Gabriel Mountains National Recreation Area – this would leave the ANF under the jurisdiction of the Forest Service, but provide increased funding, federal protection, and prestige. The Forest Service would increase its educational and interpretive offerings; restore, update, and improve existing services; and – most importantly, “Expanded recreational opportunities, including access and trails, would be a primary focus.” That’s a BIG WIN for hikers. 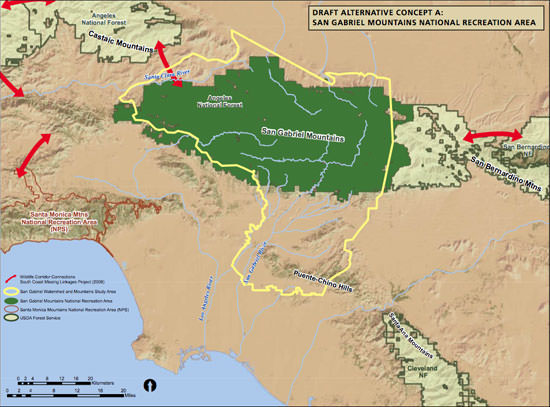 2. A San Gabriel Parks and Open Space Network – a public-private venture combining local parks in the urban sprawl with land in the Angeles National Forest and Puente-Chino Hills. This would essentially bring more of the parkland into the urban backyard, and focus on areas of historical and cultural importance within those cities as well as the natural landscape that ties it all together, like the Juan Bautista de Anza National Historic Trail and Old Spanish National Historic Trail. 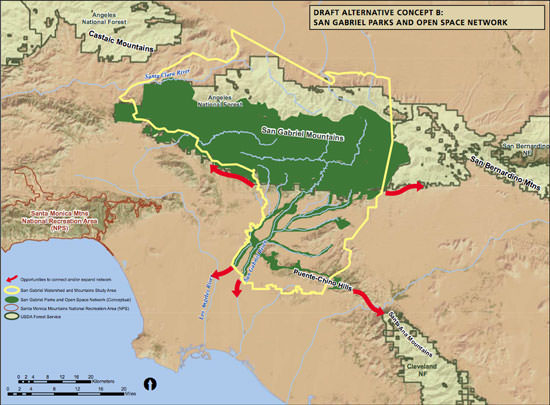 3. The San Gabriel River Watershed National Recreation Area – this would assign Wild and Scenic River status to the North, East, and West Forks of the San Gabriel River, and turn most of the High San Gabriels into a National Recreation Area. The remaining watershed of the lower San Gabriel River would be given federal protection (and hopefully, eventual restoration). Current agencies would remain in charge of their areas, but the NPS would offer informational sites and “river rangers” to highlight the watershed’s biodiversity and importance to the Los Angeles basin. 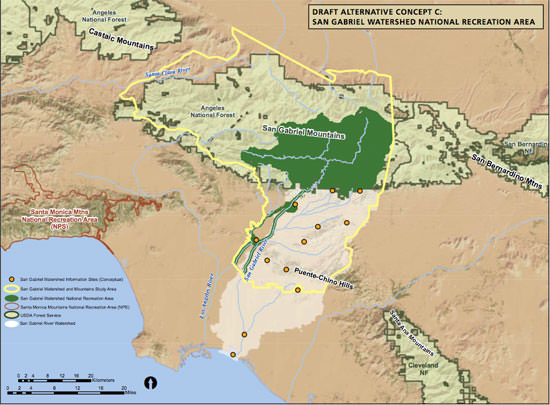 All-in-all, this is pretty outstanding news for our local natural areas – and a nice change from the flood of closing-state-parks news I’ve been wading through lately.

The Park Service invites you to comment on the plans, either by mail, email, or in person at one of the scheduled local meetings. The PDF of the Comment Form is here, and the scheduled meetings can be found here. The comment period ends October 30th.