Why Can't the L.A. Times get the San Gabriels Right?

“Visitors to the San Gabriel Mountains can be forgiven if they see overflowing trash bins, broken marijuana pipes, graffiti and road kill and wonder what became of President Obama’s vision for the wilderness … Trash, broken beer bottles and other blight were present in abundance. Porta Potties and interpretive signs were covered by graffiti. Ravens pecked at dead snakes and squirrels that had been run over by drivers along a two-lane road … The only obvious indication of the historic designation was a sign, barely visible in the shade of six pine trees along California 39 just north of Azusa, that read: “San Gabriel Mountains National Monument.” 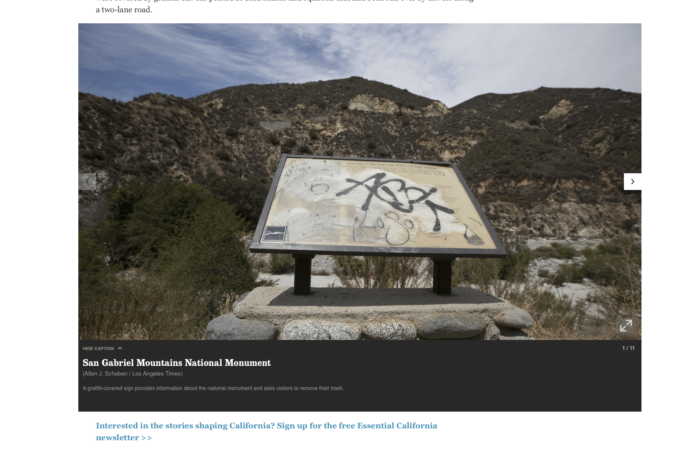 The article exclusively features images from the East Fork area of the mountains, an extremely popular day-use area that’s been considered overused for far longer than the Monument plans have been around. Several people interviewed in the article either didn’t know there was a San Gabriel Mountains National Monument or didn’t know what the designation change from the former Angeles National Forest meant … which is not surprising, since both this article and the Times in general have done a less than stellar job of explaining those processes over the past several years. So, what’s going on here?

The L.A. Times does not seem to understand the Monument designation process

Now admittedly, the process of how these monuments come into existence – and this one in particular – is pretty dang complicated. But the Times makes it seems like when President Obama signed the proclamation last October that everything should have been upgraded and improved overnight. In reality, that signature only kicked off another long and complicated process to actually form the management plan of the new Monument. So when the Times tells you that the only difference is the new sign and that the Forest Service isn’t treating the new Monument Area any differently than the rest of the Forest, that’s exactly on track with the timeline of the Monument process.

What they’re not telling you, though, is the reason they’re using the existing Angeles National Forest Land Management Plan is because they just finished an extensive public comment period on what will become the new San Gabriel Mountains National Monument Land Management Plan. The Forest Service expects to have a draft of the new Monument Management Plan by this winter, after which the public will get another 45-day period to comment. After that, there’s another revision period, and an objection period before the Plan is finalized. The Forest Service is estimating this process to be completed by Winter of 2016 or Spring of 2017.

The Forest Service has not been great at communicating this process, either

At a meeting about the San Gabriel Mountains National Monument at Eaton Canton in March, former Forest / Monument Supervisor Daniel Lovato said the Forest Service was consulting with the Park Service to help design new interpretive signs and exhibits … but when I asked him about the progress in that area at a meeting in June he said no such meetings had occurred, nor were they planned. At the public meetings about the Monument, which had initially been pitched as a way for the public to learn about the Forest Service’s plans for the area, visitors were instead met by CD-ROMs of nearly incomprehensible internal management documents dating from 2005, paper handouts with items like “for more information go to: http://www.fs.fed.us/nepa/nepa_project_exp.php?project=46964” (note to government agencies: bit.ly. Please.), and rangers and staff – some of whom weren’t even from Southern California – who could only answer questions with vagaries because, as we found out, there was no draft plan to present.

Lovato at a meeting on the Monument in March, 2015

Contrast this with the Park Service’s recent public meetings on the Rim of the Valley, where visitors got a presentation of the proposals, a general Q&A with park staff, smaller group-time with park staff and fellow citizens to ask questions, share opinions, and register official public comment, and a comprehensive (if not exhaustive) copy of the actual Draft Study, and it may become clear why so many people wanted the Park Service to have a larger role in the management of the San Gabriel Mountains.

Still, though, the Times has no excuse for not knowing how this new Monument Planning process works – a document called “Key Messages About the Monument Planning Process” is available online (PDF) and was available in person at the meetings. It spells out exactly what the process for the new management plan is and says the current Forest Service plan is to be used in the interim – so it’s not, as the Times article suggests, that the Forest Service isn’t doing anything to change the way the land is managed — it’s that they’re in the process of doing so.

The Times is wrong about the “Need to Change” analysis

The Times article says “the U.S. Forest Service said it does not plan to significantly change the way it manages the 346,000-acre wilderness,” and says that both activists and users of the Monument and Forest are upset about this. However, just three paragraphs later the article says that “Significant improvements under discussion include public transportation systems in the monument, which stretches from peaks north of the city of Rancho Cucamonga west to rugged areas above the city of Santa Clarita. About 4,000 acres are within the neighboring San Bernardino National Forest.” So … no significant changes, but significant improvements are under discussion?

In reality, in the official Need to Change Analysis (PDF), the Forest Service’s initial report notes that in most aspects no changes are needed in the new Monument, but it does actually outline several areas where change is needed:

Additionally, these documents do not yet take into account the first public comment period. As part of the Monument process, the Forest Service is required to seek and implement public input into their finalized plans. I know for a fact that many people at the meeting I attended were calling to focus on the issues mentioned in the Times article, including over-use, under-funding, bad signage, poor enforcement of existing laws and rules, expansion of the Monument to include the Front Range, Tujunga Canyon, and Arroyo Seco and calls to prevent high-speed rail from using the San Gabriels as a thoroughfare. If you feel like seeing the breadth of some of the comments, they are all available online. They run the gamut from screeds against a communist takeover of Southern California (really) to extremely well-written recommendations from groups like the Concerned Off-Road Bicyclists Association, whose riders and members have been instrumental in picking up a lot of the Forest Service slack in trail work in the Station Fire Burn Area. 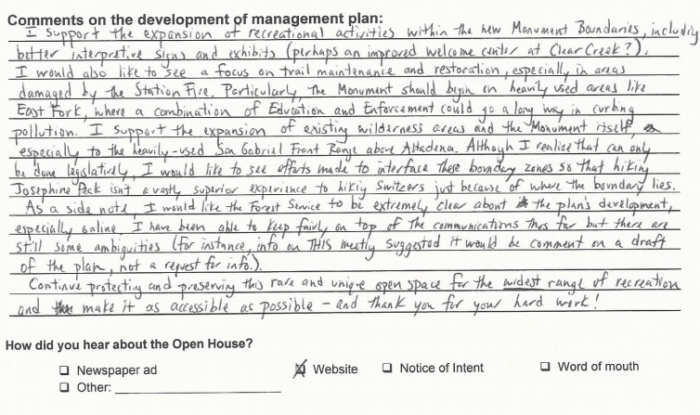 my scrawly public comment, written at the meeting I attended

The Times is right about a few things, though

The Times is correct, however, about two things: the Forest Service doesn’t have enough money and lots of people are frustrated with their management.

Across the country, Forest Service units are strapped for cash and often underfunded. That’s especially true here in the Angeles National Forest, where visitation is high, use is constant, and huge chunks of the budget go toward fire suppression instead of recreation. However, this underfunding is not a new problem and – as I have mentioned many times before – the only way to truly change this is to let Congress know we want them to start giving our outdoor agencies the resources they need to fulfill the mandates they’re given.

As for the management issue, it’s hard to say definitively whether the struggles the Forest Service has had in the Angeles National Forest have been due to bad management or the aforementioned lack of funding. Although I’ve found that people generally believe the Park Service does a better job with recreation and interpretation, it doesn’t really matter which agency is running the show if they’re not getting the resources or support they need to run it properly. From what people both inside and familiar with the Forest Service have told me, the rangers here are well aware of the influx of graffiti, trash and litter in overused areas, and illegal squatters and gold panners – they just don’t have the personnel to do much about it.

Although the Times implies no new money is coming to the Monument, advocates have raised nearly $3 million specifically for high-priority restoration projects. So while a consistent source of federal funds can only be appropriated by Congress, local groups have raised enough cash for the Forest Service to hire some key positions – including a Volunteer Coordinator who can help manage and direct the countless hours of work volunteer groups do in the San Gabriels and serve as a single source of communication for other groups that are getting involved. The ‘field ambassadors’ mentioned in the article will, I’m sure, go far in helping to put a face on the mountains for visitors, but perhaps the Forest Service would be better served by pulling in some additional rangers to do law enforcement work in areas like East Fork. 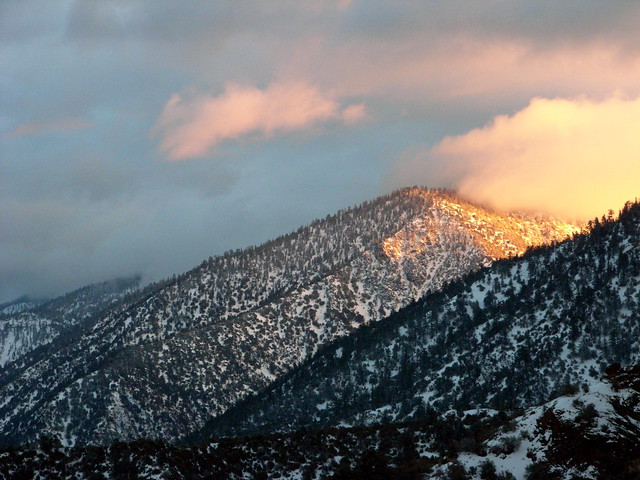 The San Gabriel Mountains National Monument – what a dump, right?!

In the end, although there are still concerns about the new San Gabriel National Monument, to suggest that the entire designation is worthless simply because we are 10 months into a 3-year land management planning process is irresponsible. Yes, there are problems in the San Gabriels – and yes, I’m sure we would all like to see them solved more quickly – but all of those problems existed when the land was still a National Forest and we unfortunately have to remember that we’re moving at the Speed of Government. The new Supervisor Jeffrey Vail has already begun making improvements and is planning for the future influx of donation cash (and probably also hoping for additional funding from Washington in the next federal budget).

Right now, the best thing we as people who use the San Gabriels can do is to volunteer when we can, pay attention to the Monument process, and be sure to register our comments when the first draft of the plan is released. Perhaps the next time the Times decides to cover the Monument process, they can provide some of that information to their readers. Until then, you know you can always find it here.