Where Your Money is Going

Our crowdfunding campaign got off to an excellent start over the weekend, raising over $4,000 in our first 24 hours! Thank you SO MUCH to everyone who contributed – and thank you to everyone who was able to at least share the campaign with their friends and relatives on social media.

While we’re thrilled with the response so far, we know this isn’t a sprint and it’s going to take a lot of work to get us to our fundraising goal. It’s a good thing, then, that we’re used to long days on the trail – where you often have to just put your head down and one foot in front of the other until you reach the summit.

We have received some questions from readers and contributors about where, exactly, the campaign money is going – so I wanted to take a few minutes to be as transparent as possible with this – especially because it seems like a lot of money when you don’t know what it’s all for. 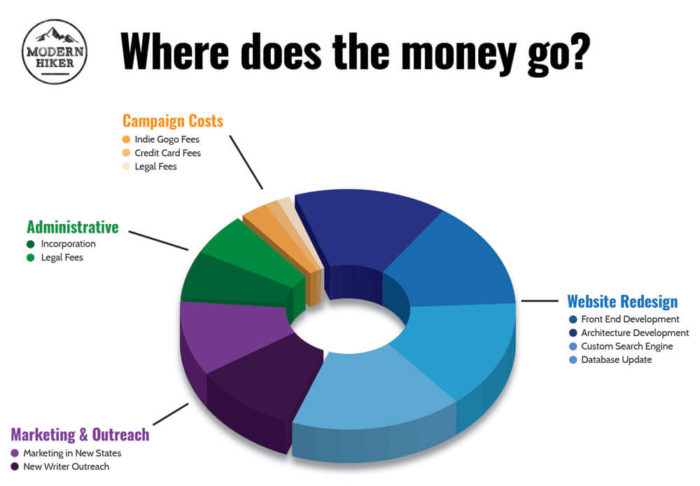 First up, almost every single penny that’s donated is going to make the site better for you, our readers. No one’s getting living expenses while we’re doing this. In fact, since we started putting this campaign into motion a few months ago, I have been living off of my savings account and not drawing any income from the site. Every dollar the site generates has already been going into the pre-campaign costs — things like advertisements, production on the campaign video, rental fees, etc.

The vast majority of our fundraising budget is going directly into web site development. Modern Hiker is 9 years old and has an enormous database of hikes that, in some cases, is built on some really old code. This isn’t just a simple blog that we can slap a new theme on and call it a day – we need to rebuild the site’s structure from the ground up, check and upgrade our backlog of trail info to ensure all the proper metadata is encoded, and build a custom-designed search engine that can quickly and easily sift through that data to help you find new trails. In addition, all of the new functionality – including user profiles, bookmarked hikes, social media integration, and location-specific content – will require coding and visual design that currently doesn’t exist on the site. Even getting that stuff done on the cheap is going to be pretty expensive when it’s all said and done — and, like most things, getting it done right is even more expensive. This campaign ensures that we’ll have enough in the campaign chest to build an excellent web site the right way, and that you won’t have to worry about broken functions or weird bugs once you start using it or delays if we have to scramble to find the money for additional work-hours for our development crew.

As we expand our coverage, some of these funds will go toward advertisements and outreach events to establish Modern Hiker in new areas (because you know Facebook really doesn’t show you our stuff anymore unless we pay for it) – as well as toward finding and funding our new writers. Good writing from local experts has always been at the core of Modern Hiker, and since we first started adding additional writers we have always paid for that new trail content. It’s not only a good way of ensuring that you always have clear and accurate trail guides, but we also believe it’s the right thing to do.

A small amount of the funding will go toward offsetting the incorporation and legal fees that are standard for setting up a new business, as well as paying off shipping and production costs for our perks, and credit card and Indiegogo transaction fees.

The site itself does make money right now, but not enough to pay for the type of improvements we would like to deliver to you — certainly not as quickly as we would like. Sites that focus more on stuff you can buy directly — whether it be gear or tourism-related — are much more attractive to advertisers than a an advocate for outdoor recreation, a source of parks journalism, or a trail database. Although we could find investors, we value the independence to pursue stories and report on news without interference from sponsors or monied ties — and believe me, as someone with more than a decade of experience in television writing, that is a very real concern. In the end, we chose crowdfunding over investors because the site has always been for you, the amazing community of hikers, trail-runners, backpackers, gear junkies, park nerds, and regular city folks who just need a little more nature in their lives.

We hope you’ll join us on this journey.