What’s Going On With Casey Nocket?

For those of you who don’t know, in addition to writing about the outdoors I’ve also got a good 11 or so years of television writing and producing under my belt. Most of the time during those years was working on daily, live shows that covered news and viral trends. I’ve probably seen hundreds of web sites, videos, and memes become Literally The Biggest Thing Ever for a day or so, then become completely forgotten as the Internet searched for its new sensation.

You were probably outraged by this

You may have noticed this, but over the past few years mainstream news coverage has become heavily influenced by the web – and not always in a good way. In trying to scoop web sites that don’t always fact-check, established news sources are often rushing to be first instead of making sure they’re correct. In an effort to capture eyeballs online, stories are simplified and headlines “Upworthy”fied so that every single thing is the Most Amazing / Shocking / Jaw-Dropping / Unbelievable Thing That Will Change Your Life Forever.

The flipside of that saccharine heartwarming Upworthy-style news is, of course, Outrage. Look at your Facebook Feed for a second – just scroll through and count how many people are Outraged about something. Now scroll back a bit further and see what people were Outraged about last week. Outrage is the new Viral. We CANNOT BELIEVE a story, we have to tell our friends, we have to share our opinions on social media, we have to sign an online petition.

Then, a day later, there’s something new to be Outraged about, and we move on.

On my morning web browsing, I came across a feature on Slate called “The Year of Outrage,” which is both an excellent longform piece on the nature of Outrage in America and a day-by-day calendar of What We Were Outraged About in 2014. January 12: Woody Allen gets a Lifetime Achievement Award at the Golden Globes. March 27: Former Secretary of Defense Donald Rumsfeld compares President Obama to a trained ape. June 10: A Washington Post writer says getting married is a way to end violence against women. Every day, a new story that blew up the internet – only to be followed by a replacement within 24 hours. Or as Slate writes, “it’s easy to anticipate the cycle that follows: anger, sarcasm, recrimination, piling on; defenses and counterattacks; anger at the anger, disdain for the outraged; sometimes, an apology … and on to the next.”

On October 23rd on the Slate Calendar is the Casey Nocket / Creepytings story that broke here on Modern Hiker. I was worried that this story would fall prey to the same cycle and tried to get people to stay invested in the story by explaining to the General Internet Audience why this was so important to us and encouraging people to help their own parks.

[pullquote]No news doesn’t necessarily mean nothing is happening, it just means no one can say anything yet[/pullquote]For the most part, I think it’s been successful. We’ve received a lot of inspiring images from readers chipping in with trail work and park cleanup – and we even received messages and photos from other people who had spotted graffiti in their green spaces and wanted to know what they could do about it.

We posted the story on October 21. The story went viral on the 22nd and 23rd, and by October 30th, the National Park Service had named Casey Nocket their primary suspect in the case.

But after that … what else? 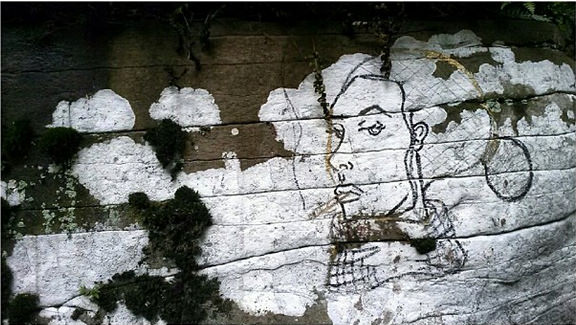 For what its worth, the outdoorsy readers seem a little less apt to flit from one source of outrage to another so easily. Since the end of October, I’ve received dozens of messages, emails, and comments basically asking, “Hey, what’s going on with Casey Nocket?”

You would think that a case where we literally have geo-tagged and time-stamped photos of the suspect allegedly committing the crimes in question would be pretty open-and-shut, wouldn’t you?

I emailed the Park Service’s Chief of Public Affairs and just asked if there were any updates, or whether or not he could say if Nocket had been cooperating. Initially the investigation was also looking for a second person although I don’t know what the results of that were. The response was succinct. The entire email read simply “No update.”

Looking for more of an explanation, I reached out to some law enforcement officials who had worked on similar cases and they assured me there was no reason to worry. They said in general, if all the evidence is there and everything works perfectly, a case like this can still take a minimum of three months to wrap up – and that’s not accounting for the addition of lawyers that can significantly add to that timeline.

So there you have it – no news doesn’t necessarily mean nothing is happening, it just means no one can say anything yet. The wheels of justice are slow – sometimes maddeningly so – but that doesn’t mean we should forget about the story or get distracted by another Daily Outrage on our social media feeds. As we ring in the new year, let’s re-affirm our commitment to not only protect our favorite parks and green spaces from vandals, but also to protect them from apathy by visiting them, volunteering in them, and most importantly – bringing new people to enjoy them so others can understand and appreciate why they’re so important to us.

As of 6/13/2016, Nocket has pled guilty. Partial sentencing has been announced.