After rumors about what was going to happen to the body of P-22, Miguel Ordeñana — the wildlife biologist at the Natural History Museum of Los Angeles County who first captured the cat on film — has posted some clarifications.

P-22’s remains are currently being held at the San Diego Zoo Safari Park, where he was treated and eventually euthanized. Zoo staff and the California Department of Fish and Wildlife at the faculty performed a necropsy, which is standard procedure for all animals and as Ordeñana noted, “can help conservation of imperiled mountain lion populations.”

When the CDFW learned of tribal wishes to not use P-22’s remains for research, this process was halted and there was a pause on the body’s release.

Ordeñana said the Natural History Museum has offered to repatriate P-22 to Los Angeles until the next steps are finalized, and they are in conversation with members of the Tongva and Chumash tribal communities. The Museum’s Instagram account has confirmed this and has clearly stated there are no intentions for the Museum to taxidermy P-22 or display his remains in any way.

As of 10:15AM on Saturday, December 17, 2022, Beth Pratt posted a beautifully moving eulogy for P-22 on her Facebook page. Veterinarians found a long list of health issues with P-22 on their examination and they determined he would not be able to live comfortably. P-22 has been euthanized.

My sympathies are with Beth and the entire team of biologists and veterinarians who were helping him.

Read my eulogy for P-22 in the LA Times here.

In an update reported by the LA Times, biologists have expressed concern that P-22 was in poor health, showing thinning hair, muscle loss, potential mange from rodenticide, and an eye injury resulting from an encounter with a vehicle that may bode poorly for hidden head trauma. They are saying it is not likely he will be returned to Griffith Park.

A full, in-depth FAQ from the wildlife biologists as of December 13, 2022 is available online here.

It’s been a big week for L.A.’s celebrity puma P-22, but unfortunately it hasn’t all been great news. After attacking some leashed pets and spending a lot more time in the residential areas of the Hollywood Hills and Los Feliz than he usually does, folks were concerned. The National Park Service staff at the Santa Monica Mountains National Recreation Area and the California Department of Fish and Wildlife announced plans to bring the mountain lion in for a health evaluation, noting that he was exhibiting signs of distress. There were reports of erratic behavior and even some suggestions P-22 had been hit by a car and was injured.

P-22 was spotted in the backyard of a Los Feliz home earlier this week, tranquilized, and removed to the LA Zoo where veterinarians planned to evaluate the cat and see how he was doing.

Unfortunately, though, because this is 2022 and the internet, a lot of wild rumors started to fly. Of course, it didn’t help that a lot of coverage was bordering on the sensational, like this early headline from the New York Times, which of course also took the time to describe L.A. as a “sprawling, often-apocalyptic city,” because they just can’t help themselves: 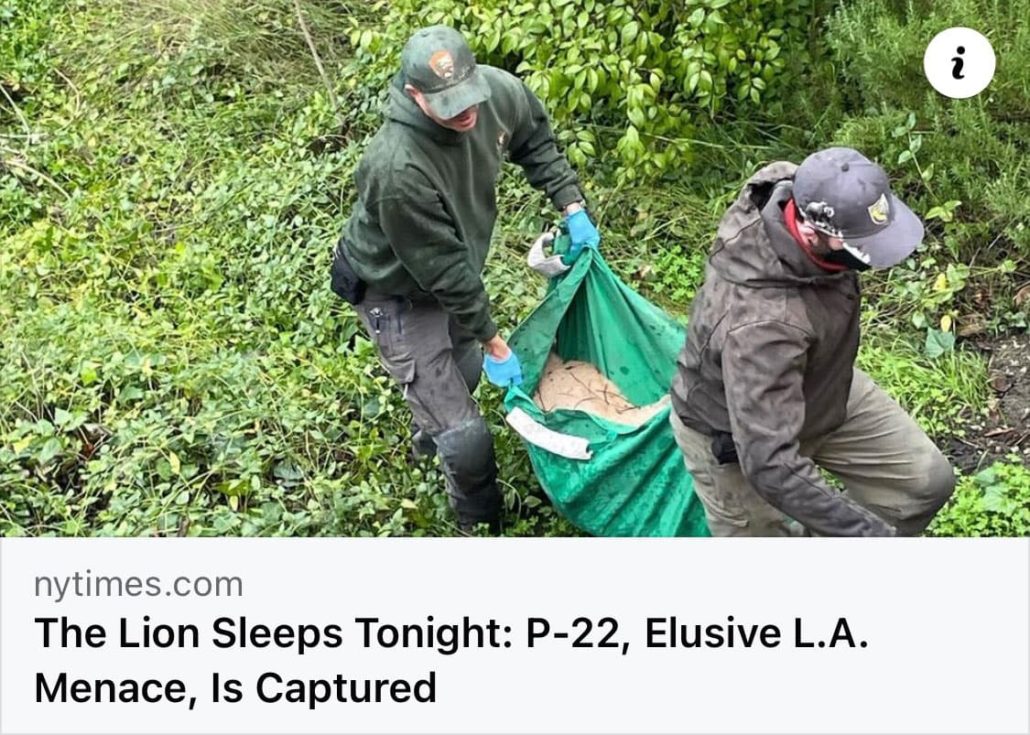 Of course, P-22 is not elusive — he’s a collared mountain lion tracked by the National Park Service. And no one in L.A. really thinks of him as a menace, either — the cat has an annual festival in Griffith Park and is pretty much celebrated across the board by Angelenos.

Beth Pratt, the California Regional Executive Director for the National Wildlife Federation, is someone who has done an incredible amount of work to elevate P-22’s profile, protect his habitat, and work toward the completion of wildlife crossings to make easier for L.A.’s other mountain lions and wildlife. Unfortunately she has also had to combat many rumors about P-22 over the past few days, most of which revolve around the agencies and people involved using this as an excuse to euthanize P-22. 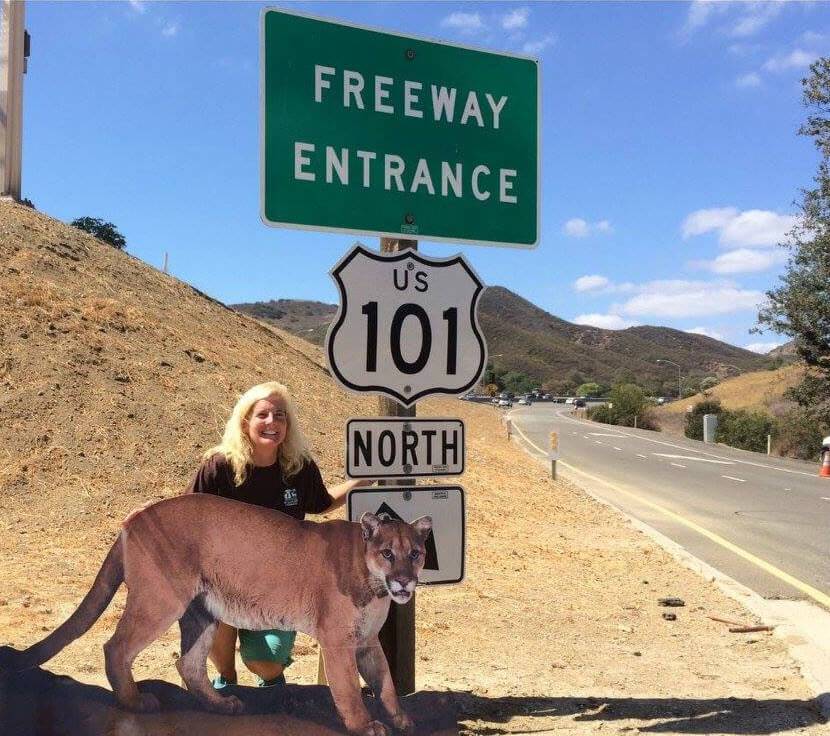 Pratt near the site of the future wildlife overpass in 2016.

In an email sent late on Tuesday, December 12th, she wrote:

While I am trying to deal with my own emotions about an animal I love, it’s extra difficult to process and deal with the misinformation I keep seeing— including people spreading false accusations that the agencies-and myself-only want to euthanize P-22. This is absolutely false.

I have been in constant communication with the state and federal agency teams that are partnering to care for P-22. They all love P-22 just as much as any of us. They are doing the best they can to ensure this remarkable cat stays alive.

They did not take the step to capture him lightly. P-22 is not well. His behavior changed radically almost overnight. I have spoken with the biologists and also seen photos of him. He is underweight. He has mange, which can mean he was exposed to rat poison. His tail looks very thin. He has lacerations on his face and his eye has an injury. He may have been hit by a car.

What is also getting lost is that P-22 also injured a person. When a wild animal injures a person, this is usually cause for the animal being put down right away. That CDFW is not doing this shows they are are taking extraordinary steps for P-22. He is getting top notch care and they have assured me they will spare no expense to get him the medical attention he needs (and I have assured them we at #SaveLACougars will fund anything they needed for P-22).

Information will likely change and shift quickly in the next few days, but it’s important to remember that everyone involved in this project cares deeply about P-22 and has his well-being and best interests in mind. And many of them, like Pratt, have invested years if not decades of their own lives in the cause of urban wildlife. These people are going to make the best call.

You can watch a half-hour recorded Zoom of an update with wildlife biologists here.

It’s also important to remember that P-22 is very old for a male mountain lion — he’s currently the oldest living cat being tracked by the NPS in Southern California. He is also surviving in the smallest range that has ever been recorded for a mountain lion (P-22’s range is only about 6% of the average range for a male mountain lion). That he has survived inside Griffith Park for over 11 years is nothing short of a miracle, and the fact that in that time he has become a beloved symbol of urban wildlife and an inspiration to countless people to further the cause of urban wildlife connectivity is truly astonishing. I wish him and all the people involved and who have ever worked with him in mind nothing but the best.

If you’re looking for updated information, it’s best to check the P-22 Mountain Lion Facebook page or the official page for the Santa Monica Mountains NRA.