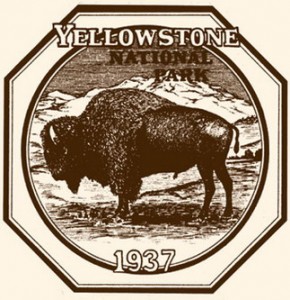 Apparently, well before I was stomping around any hiking trails, the National Park Service had a little tradition of handing out window decals when you visited a park.

Starting in 1918 (probably unofficially) as a way to tell which motorists had paid their entrance fees, the practice was eventually officially adopted by the Park Service, then scaled back when they realized that people were literally covering up every available inch of glass space on their cars. The stickers were produced until 1940, but you can still get one today with a few clicks of your web browsing device of choice.

Seattle’s Ranger Doug sells recreated sets of all 22 3-inch National Park stickers available for 20 bucks, along with single stickers and a wide range of other vintage and recreation WPA-style posters and postcards. So go get your tape measure and figure out how many of these you can stick on your car without getting pulled over by the cops.