Urban Wildlife Week and P-22 Day are Coming to L.A.

Beth Pratt-Bergstrom is the California Director of the National Wildlife Federation, and one of the driving forces behind L.A.’s upcoming Urban Wildlife Week (October 16-22) that culminates with a celebration in Griffith Park for P-22 Day, in honor of that park’s resident celebrity mountain lion.

We got a chance to chat with Beth over the phone during a rare bit of downtime in the leadup to this incredible event.

The following responses have been slightly edited for conciseness and clarity.

Beth Pratt: P-22 Day and Urban Wildlife Week were some of the first things I started working on in the Santa Monica Mountains with the NPS and other partners, because  P-22 has really captured my imagination both personally and from a wildlife conservation perspective. I always had it in my head I wanted to retrace his route. That idea just kept sitting there and sitting there and as we got more and more into our work in Los Angeles, he came to symbolize not just this call for a crossing at Liberty Canyon but connectivity throughout the whole city. That’s what this hike and event are really about. Obviously we’re trying to call attention to the visionary wildlife crossing we’re trying to build — which will be the biggest in the world — but it’s also about showing connectivity or lack thereof.

This event has turned into more than just re-tracing the cat’s route, but that’s where it started.

I have to say after doing it — as someone who’s written a book about this cat’s travels — after having hiked it I am more impressed this mountain lion made it at all. It is ASTOUNDING he was able to make it to Griffith Park. 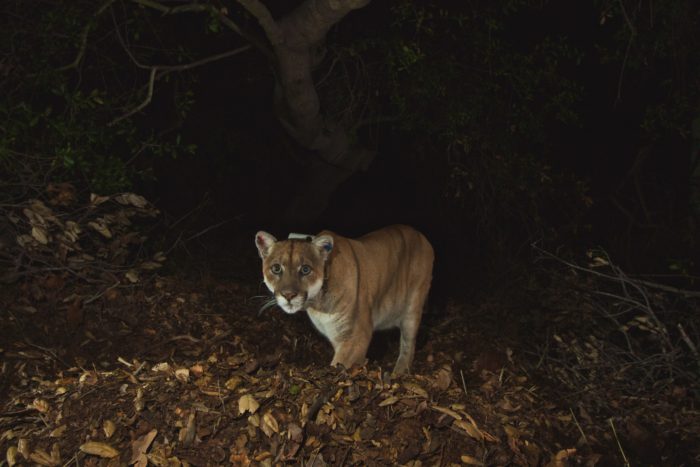 MH: Yeah, I totally agree. When they first announced P-22 had made it into Griffith, a lot of people who have hiked in the region and especially those who are familiar with that Hollywood Hills area — it’s kind of shocking that he was able to cross those giant freeways and was just strolling through these fancy neighborhoods.

MH: Is the tenacity of P-22 and his journey part of what makes that cat’s story so special?

B: Yeah, my friend Mary Ellen Hannibal, who has authored a few books and has one coming out called Citizen Scientist, she reviewed my book and used the term “gumption” — the sheer gumption of this cat.

Part of what we’re celebrating with P-22 Day is the people of L.A. Speaking as the California Director for the National Wildlife Federation, I do work all over the state. I do projects in the Bay Area, Yosemite … and of course our organization does work all over the country. I can tell you that L.A. is leading the way in co-existing with wildlife. It’s not perfect — but the value system here and this new conservation paradigm about wildlife sharing our space with us is great. You know, I see more coyotes in L.A. than I do in my home outside Yosemite in the middle of nowhere. So we’re celebrating both this cat P-22 and what he has come to represent, which is “L.A. is willing to live with a dangerous predator in its midst.” I mean that is something to celebrate! Because I can tell you, in any other area of the country, that cat would have been shot or removed immediately.

What’s also great is the world is watching this. The New York Times covered the story — when P-22 munched on the koala bear at the L.A. Zoo, what happened? L.A. rallied to his defense. I can tell you that wouldn’t have happened in too many other places. 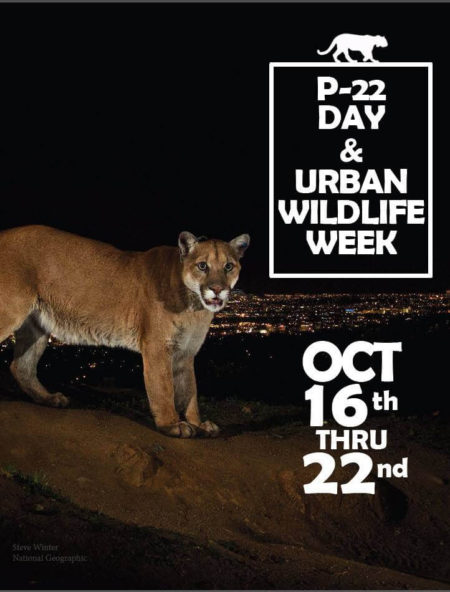 MH: That’s really awesome to hear you say that because I’ve been hiking and writing about hiking in L.A. for more than ten years now and I feel like L.A. is sort of waking up to this idea of being a full fledged outdoor city. And in many ways it’s leading the nation in terms of not only stuff like this with wildlife but also in terms of diversity and openness and especially recently in terms of access — it’s like a “Second Outdoor Awakening.” We’re sort of like the test crucible for the rest of the country and issues they’re going to be dealing with over the next 10-20 years.

I’ve come to just love the city for what it represents on so many levels. And that because it’s a unique city and maybe even because of its geography, this issue of community — which I know L.A. struggles with in some respects because of traffic and other issues — but L.A. has this sense of community with nature that we’re going to be celebrating as well. We’re going to have the Mayor’s Office on P-22 day, we’re going to have all these groups and agencies who are all working on various pieces of this nature puzzle. Again, I’ve just never seen a city that had so much of a community that was working toward something like this in such a unique way. It’s all these diverse angles.  Miguel — (the Angeleno wildlife biologist) who discovered P-22’s photo, he even says P-22’s story is so relatable because you have this social justice angle: he’s stuck because of traffic and has no trail access! You’ve got the conservation angle, that he represents biodiversity. You have the dating game angle, you know he’s a bachelor … He captures all the perspectives you can think of.

MH: Speaking of being a bachelor, I think I just saw a beautiful photo of a female mountain lion that had made it into the Verdugos. Is there anything that you’ll be doing on P-22 Day to maybe push for more wildlife crossings into the Verdugos or San Gabriels or Puente Hills?

B: So, we’re launching this on the 16th at the Natural History Museum. Our vision is connectivity across all of L.A. That’s the long game, but of course I have to get this Liberty Canyon crossing built first because that’s the biggest piece, but we’ve been working with Mia Leher and Associates who do a lot of great projects around the city with this larger connectivity game. On P-22 Day they’re going to be releasing some drawings about other connectivity points — and again, stressing that they’re for both wildlife and people. One of the concept drawings they’ll release is in Griffith Park — you’ll see a wildlife crossing and a cultural crossing.

Now in terms of specific mountain lions, when you look at the connectivity needed for them — which provides connectivity for other wildlife, of course — the 101 is really probably the place that needs the most focus right now. We already have our eye on the 5 where P-32 was killed near Santa Clarita and Castaic. That’s another point where if you want mountain lions to come down from the north, you need a connection there. On the 118 and the 126, they’re having a little more success but obviously there’s room for improvement. 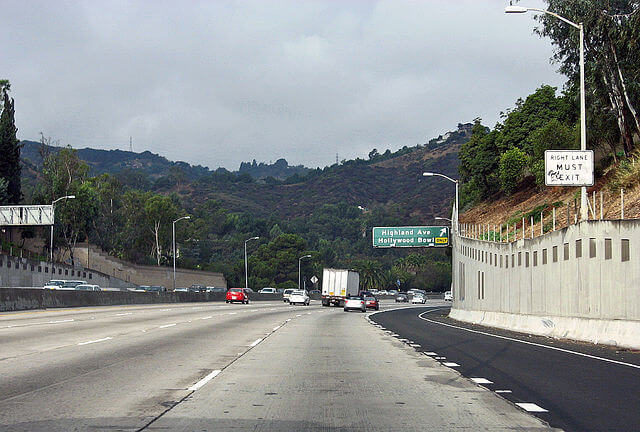 US-101 in Cahuenga Pass. Photo by Downtowngal, used via Creative Commons.

Unfortunately the only sad part is I don’t think we’ll get any bridge in place in time to get P-22 a date. But, you know, even if he ends his life a bachelor he should be satisfied knowing that he’s inspired this movement.

MH: I’m just wondering, what makes the 101 such a challenge for these corridors?

B: If you look on a map what you’ll see is a funnelling of the green space. From the north to south it just winnows down to a fine point. If these animals are moving from north to south they lose options. They get to this fine point with development on either side and the 101 itself is ten lanes of pavement. The 126 and 118 are not that big — the 126 in some places is two lanes and the 118 actually has an equestrian tunnel underneath it that they’ve seen animals use.

The 101 is also right in the heart of where a lot of the mountain lions live because it’s near the most green space. So to get animals from the north and south — especially to increase the gene pool — that is really the blockage. They have the science to back this up. The Park Service with their mountain lion studies that they’ve been doing since 2002, they have over 70,000 GPS points on these cats and there’s thousands of (the tracks) coming up to the 101 and just turning around. So it’s the worst problem, but there’s no doubt that all the roads are problems. If you look at the mountain lion territories, they are absolutely defined by the freeways and that’s not how it’s supposed to happen.

MH: Getting back to the migration paths, how can people join up or follow along with the hike that you’re doing?

B: The hike is going to be tracked virtually — I’m actually wearing a mountain lion collar! You’ll be able to follow along with us online and we’ve picked a few places where the public is welcome to join us — the first is the opening where the hike begins — 8AM is the kickoff ceremony at Liberty Canyon. There will be a half hour presentation and I’ll get the mountain lion collar put on me, and then we’ll start with about 3.8 miles of mostly trail through Malibu Creek State Park to King Gillette Ranch. That’s a great hike and we’d love to have anyone join us. After that we’ll have about an hour stop at the Ranch where the mountain lion biologist will be there talking about the wildlife studies that have been done in the region.

Another place people can join us is the last half-mile of the hike, from the Old L.A. Zoo on Saturday at about 10:30AM, people can meet up there and join us across the finish line.

MH: Is there a hope that this will become an annual event?

B: You know, I would really like it to. Part of the ceremony on the final day will include Councilmember Koretz and Councilmember Ryu officially declaring the day P-22 Day. So I’m guessing we’ll have it every year. Whether we’ll do the hike every year — and I’d like to — we’ll see!