#TryingStuff at the #OmniGames, Part Two: A Team is Born

The assembled #omniten waited in the cozy confines of the ranch. We paced as we drank hot cocoa and coffee – sometimes at the same time – and looked nervously at the sandwiches and homemade chili laid out on a table. Should we eat now? What if the games required a lot of running? Will we get breaks? 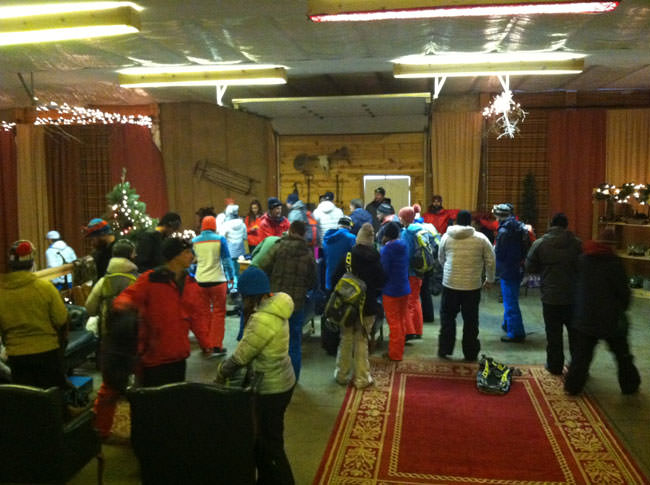 Columbia’s Social Marketing Manager Daniel Green took the stage in front of a flat screen TV at the front of the room and asked the #omniathletes to take a seat. This was it … even though we still didn’t know what “it” was. Would the #omnigames be like the Olympics? Like Survivor? Like Battle Royale?

First, Daniel announced what the #omnigames were going to be – two days of challenges to measure our skill, speed, wits, and mettle. There would be 10 events spread out over two days: 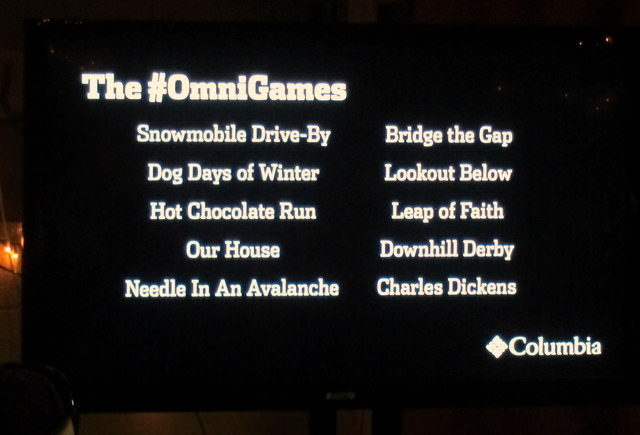 Our House: build a snow shelter in 20 minutes with only a few supplies
Hot Chocolate Run: get a pot of water boiling in 20 minutes
Needle in an Avalanche: find an avalanche beacon hidden in the snow
Dog Days of Winter: learn about dog sledding while on a sled ride, then remember the info on a test
Snowmobile Drive-By: pilot a snowmobile to an archery range, then hit the targets

Lookout Below: navigate an advanced level ropes course 55 feet in the air
Bridge the Gap: navigate a beginner level course 25 feet in the air
Leap of Faith: traverse a 377-foot long zipline and end with a 65 foot tall free-fall
Downhill Derby: ski as much vertical distance as possible in an hour
Charles Dickens: tell the story of the #omnigames via blog posts and social media

OK – so writing. I’ve been paid to do that, so I figured I had that one covered … I’d ziplined before and gone skydiving, so I wasn’t worried about the free-fall – but for everything else I was going in completely green.

When the points were all tallied up at the end of the event, the top 5 teams would win a weeklong backpacking / hiking / adventuring trip in Jordan! Desert canyoneering is MUCH more my style and seeing the historic ruins of Petra in person is on my Life List – so this was something I was definitely going to fight for. Columbia had already been to the country the previous year with a team of journalists and the photos looked incredible – I just hoped whatever team I ended up on would be strong enough.

Now that we knew what we were playing for, we found out how the teams were decided. All of the Spring/Summer Crews had their twitter handles thrown into a hat and each Fall/Winter person came up to randomly draw a partner on their team of two.

As the names were called and whittled down, I watched my Season One friends get picked up by wintry teammates – and when ‘Modern Hiker’ was called up by Seth A. Yates from Plains and Peaks – instantly, we recognized that one area we would definitely dominate in was the arena of facial hair. Without missing a beat we both yelled out “TEAM BEARD!” We assessed our various strengths in private – Seth was an experienced skier and had done a few of the challenge activities before. And while I’d only been skiing three times in the past 9 years, I was willing to throw everything I had at this competition … even trying to overcome my fear of heights on the ropes course.

Now that #TeamBeard was born, we were ready for our first challenge – Our House.

We strapped on snowshoes (hey, I know how to do this!) and marched out into the woods for the first challenge for #TeamBeard.

The scenario: We had lost the trail and become stranded in a snowstorm. We had two large branches, a few feet of rope, a tarp, and a shovel and had to build some form of snow shelter in 20 minutes. After we were finished, the shelter would be inspected and awarded points based on how well it held up and whether or not the judges would sleep in it. We were allowed to create the shelter anywhere we wanted but were not allowed to break any branches that weren’t already on the forest floor.

The stopwatch started – and we leapt into action.

I’d never built a snow shelter before but I knew some basics about them – with a limited amount of time we weren’t going to make anything fancy, so we left the materials and scouted out some potential areas in the woods. We quickly found a naturally occurring snowdrift surrounded by trees – an excellent place to start a foundation.

We cleared snow from the ground and used it to build walls in the direction of the prevailing wind to help block the breeze and additional snow. We wedged a large branch diagonally between two trees and draped the tarp across the top of our cleared area to protect from falling snow and help keep heat inside the shelter. We used the rope to secure the tarp to nearby trees, built up the snow walls along each edge of our sleeping area, and weighted down the tarp’s other end in the face of the blowing snow to anchor the entire structure.

When the judges called for us to throw our shovels down and stop working, we climbed inside the cleared out area on top of our packs and huddled for warmth. The judges paced around the structure and asked, in the confidence-shaking tone only judges and critics possess, “Would YOU want to sleep in this overnight?”

“Well, we’d prefer the hotel suite, but this would do in a pinch.”

30 mile-an-hour winds were predicted for later that night so they shook the tarp violently to see if it would hold up.

#TeamBeard emerged confidently from our first challenge, disassembled our structure, and marched through the snow to our next challenge – the Hot Chocolate Run.

The snow was now coming down nearly horizontally as we approached two small barbecue grills in another section of the woods. On a small table stood some unbroken wood, newspaper, a knife, flint, magnesium strip, and two pots with water in them.

The timer started and we went to work – first we created a small newspaper basin, then Seth started shaving off magnesium strips while I tore apart the wood pieces into fibers with my hands.

We built the kindling pieces around the magnesium strips and tried to spark them to flame. We managed to get a few bursts of fire going but the wind and snow kept extinguishing them. Three times, we got the start of a fire, only to watch it die away in a matter of seconds.

Seth went back to scraping magnesium to add to the pile and I rebuilt the kindling catch, determined to make this thing work. Far from being disappointing, those first few failures only proved to us that we could make this work – we just had to keep #TryingStuff …

This time, once we got the fire sparked, I held up the barbecue lid as a shield against the wind and snow while Seth breathed air into the flame … and this time, it worked! We got a fire going and fed it some larger pieces of wood. Now that the fire was burning on its own, all we had to do was get that pot of water to a rolling boil …

We placed the pot on the pile of burning wood and covered the entire pit with the lid to keep as much heat by the water as possible. Seth leaned in close to keep breathing life into the flames – and was rewarded with a ton of smoke kicked back into his face. The efforts were paying off, though – with time running out we could finally see steam rising from the pot and small bubbles forming on the bottom – but still no rolling boil.

Desperate to score now that time was running out, Seth leaned in even closer to the flames to keep blowing air – and ended up singing his beard! #TeamBeard had its first injury of the #omnigames!

Seth pulled back to extinguish his face-fire and I took over blowing air into the fire from the side … within just a few moments we got the water to a rolling boil – and from what we’ve heard, we were one of the very, very few teams to accomplish this! #TeamBeard erupted into cheers and roars … although we didn’t recommend anyone use our water for hot chocolate since it was filled with soot and newspaper pieces. After warming up inside the ranch for a few minutes and assessing the damage done to Seth’s beard (the left side was now quite a bit shorter than the right), we prepared for the next challenge Needle in an Avalanche.

Another event judge came in to explain to a few of the groups how avalanche beacons worked. Whoever went before us would hide the beacon inside a boot somewhere in the snow and we would be timed on how long it took us to find it.

Seth had found avalanche beacons before and me, well, a doctor once told me I had 20/15 vision.

We donned our toasty layers again and stepped out into the snow. We marched past a low wooden fence and Seth took the locator in hand.

When the timer started, we bolted toward the furthest section of the search area. Seth followed a wavering arrow on the receiver and shouted out the distances as they changed.

We were racing through the snow when all of a sudden the receiver changed its mind about where we were headed.

We circled once before catching our bearings and the receiver sent us back in the direction we were first charging toward.

The receiver shouted out with increasing frequency as we approached the beacon.

I separated from Seth and started scanning along the snow-covered brush and chaparral, just looking for something – anything – that wasn’t white. And, then, buried in the snow – I saw the boot. We pointed and shouted out that we’d found it – all in a much faster time than I’d expected to spend out there.

We tossed the beacon into the snow for the next team and headed back inside as the receiver announced its separation anxiety.

ON THE NEXT #TRYINGSTUFF POSTS …

– #TeamBeard picks up speed
– A slip, a fall, and a triumph
– And a newbie skis solo for the first time

Be sure to read Seth’s in-depth account of the fabrics of the #OmniGames at Plains and Peaks!

And extra-special thanks to Dave Creech for taking such incredible photos of everyone and sharing them with the group.