#TryingStuff at the #OmniGames, Part Three: For the Dogs

After performing rather well on our first three challenges, #TeamBeard briefly warmed up inside the ranch before heading back out into the elements – and into the noisiest #omnigames challenge so far – Dog Days of Winter.

For the Dog Days Challenge, we were only instructed to “pay close attention to what our drivers told us.” Vague comments suggested that we might have to learn about our drivers, the dogs, the ranch, the topography … pretty much anything and everything. This had the interesting effect of making all of the #omnigames competitors very, VERY inquisitive. We were all asking what the drivers’ names were, what the dogs’ names were, if the sleds had names – what was this thing, what was that thing, what are those for, why is that other dog in the distance herding those horses? Imagine driving a minivan full of the most curious, excitable grade schoolers possible and that’s what it must have been like for those poor mushers.

Everyone who spends time in the outdoors has a few books they read earlier in life that planted the seed of adventure in them – for me, one of the big ones was reading Jack London’s White Fang in elementary school. I’d long dreamed of being around a sled dog team but never EVER expected it to happen on this trip.

If you know dog behavior, then you’ll recognize the same thing I did when we came upon the assembled teams: these dogs were READY TO PULL SLEDS.

The dogs were also very, very friendly toward all of the #omniathletes – an Alaskan husky named Crayon kept calling me over so she could give me hugs – and I couldn’t resist settling down next to a malamute named Chubbik, who seemed to be the only dog who wasn’t getting over-excited before the sled pull. Seth snagged a dog-selfie, too – we furry creatures have to stick together. We bundled up inside the sled and it was surprisingly warm, probably because we were huddled up next to each other and wrapped in multiple fleece blankets. We dragged a bit at the beginning of the run because the dogs were starting to tire out from pulling a bunch of outdoor bloggers around all day – but once we did get going you could tell the dogs were really in their element. They pulled us, silent and strong, clearly on a mission.

But you could tell they were also still dogs – at one point on the trail, the lead dog smelled something interesting in the snow and the entire operation ground to a halt to investigate.

Along the run, we tried to soak in as much about dog sledding as possible, and when we returned we were handed a little quiz sheet to fill out – What was the command to move forward? Turn right? Turn left? Who’s won the most iditarod races? What’s the preferred breed on that race?

#TeamBeard nailed all the questions – and, just in case, I noted that the Alaskan husky was not an American Kennel Club-recognized breed. We nerds never grow out of the Quest for Extra Credit.

When we returned to the ranch, we donned helmets for the final challenge of the day, the Snowmobile Drive-By. We walked back out to the field where the snowmobiles were stationed. By this point, the wind and snow had picked up considerably – but we were all excited to close out the first day of the #omnigames. 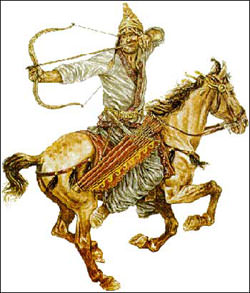 Our task here was to pilot these snowmobiles on a series of trails through the hills to a meadow, where we would test out our archery skills on some targets. Now, at first, I envisioned us doing the snowmobile and archery at the same time, like some sort of modern, wintry Parthian horse archers. But I figured Columbia didn’t have that level of liability insurance out on the #omnigames crew and was just a little disappointed when I found out the two activities would be separated. Oh well. Maybe next time.

So here’s the thing about be and things that go fast – I generally don’t enjoy them. My family still tells a story about a time when, at my cousin’s 11th birthday party, all of us kids loaded up in Go-Karts on a race track. When the start signal went off the accelerating karts kicked up a huge cloud of dust and smoke. My parents said they were trying to find me in the pack and couldn’t … until they looked far, far behind and saw me puttering slowly down the center of the lane, making sure I had an idea of what the kart’s acceleration and braking abilities were before I decided to have too much fun.

So even though the snowmobiling section wasn’t a race, I thought it best to let Seth have the first crack at piloting the machine.

After a very brief tutorial (again, end of the day) we boarded the mechanical beasts and took off into the snow, winding through trees and nearly-horizontal snowflakes at over 30 miles an hour. We all traveled in a line until we arrived at a large clearing deep on the ranch property. We pulled the snowmobiles in, turned them off, and walked toward a small archery range.

#TeamBeard chose to go second, and we removed our gloves and picked up our bows.

I hadn’t shot a bow and arrow since middle school, but I did remember the basics – aim lower than you think, draw the bowstring up, don’t shoot the gym teacher – we pulled back, aimed, and let our practice shots loose. Success! #TeamBeard had managed to land both arrows squarely on their targets! Hey, maybe archery is just like riding a bike – something you learn once and never really forget!

For the remaining three shots, Seth landed all his arrows on the target.

I, meanwhile, discovered that archery is very much NOT like riding a bike. My remaining shots went too high, too low, and finally – with perfect comic timing – in a wobbly waveform arc to the right.

But hey, at least I remembered not to shoot the gym teacher.

After the other teams were finishing up, we had some time to kill before another rider came to help break down the archery range, so a few of us took the snowmobiles on a long circular run around the meadow.

After Seth did a few laps, I hopped on board behind the handlebars for myself to give it a go. After turning on the engine and testing how grippy the footholds were (result: very grippy), I decided – in the spirit of #TryingStuff – that I was just going to gun it out of the gate this time to see how fast I could get on the straightaway. Take THAT, 11-year old me!

My only experiences with snowmobiles before this had been reading about the seemingly never-ending legal saga over whether or not they would be allowed into National Parks due to creating excessive air and noise pollution – but I can’t lie and tell you these things aren’t fun to drive around on. I piloted the trip back to the ranch in worsening winter storm conditions and had an absolute blast doing it. Navigating tight turns and steep embankments in the low visibility was a challenge – but it was an extremely fun one. And because the weather was so bad, it created the perfect setting for an absolutely epic portrait of #TeamBeard at the end of the first day of the #omnigames:

After we concluded the day watching some incredible skiers compete in the Freestyle World Cup Moguls Competition from the swanky Columbia VIP tent, we regrouped back at the hotel to get the official #omnigames team standings …

And at the end of Day One, #TeamBeard managed to jockey its way into FOURTH PLACE.

We celebrated with high-fives and “Team Beard!” shouts (OK, and maybe some beer and whiskey, too) – but Day Two was still to come. And while Day One’s activities played to my strengths as a sure-footed generalist, most of Day Two was going to be spent with my feet on slick, speedy skis or suspended more than 50 feet in the air.

I went to bed anxious for the sun to rise … and by the time I actually fell asleep, I didn’t have to wait long for it to happen.

ON THE NEXT #TRYINGSTUFF POSTS …

Be sure to read Seth’s in-depth account of the fabrics of the #OmniGames at Plains and Peaks!

If you want to help us win the Charles Dickens storytelling challenge, be sure to leave us comments, follow Seth and my Twitter accounts, share our stories, and tweet Columbia to let them know you support #TeamBeard!

Be sure to read the other entries in the #TryingStuff saga, Part One and Part Two!