Trailblazer: Maricela Rosales
Location: Norwalk, CA
Trailblazing Role: Founder of the Abilities Project, Los Angeles Coordinator for Latino Outdoors
I am a Modern Hiker because: I believe in the mission of civic environmental awareness, diversification and inclusiveness in green and open spaces! 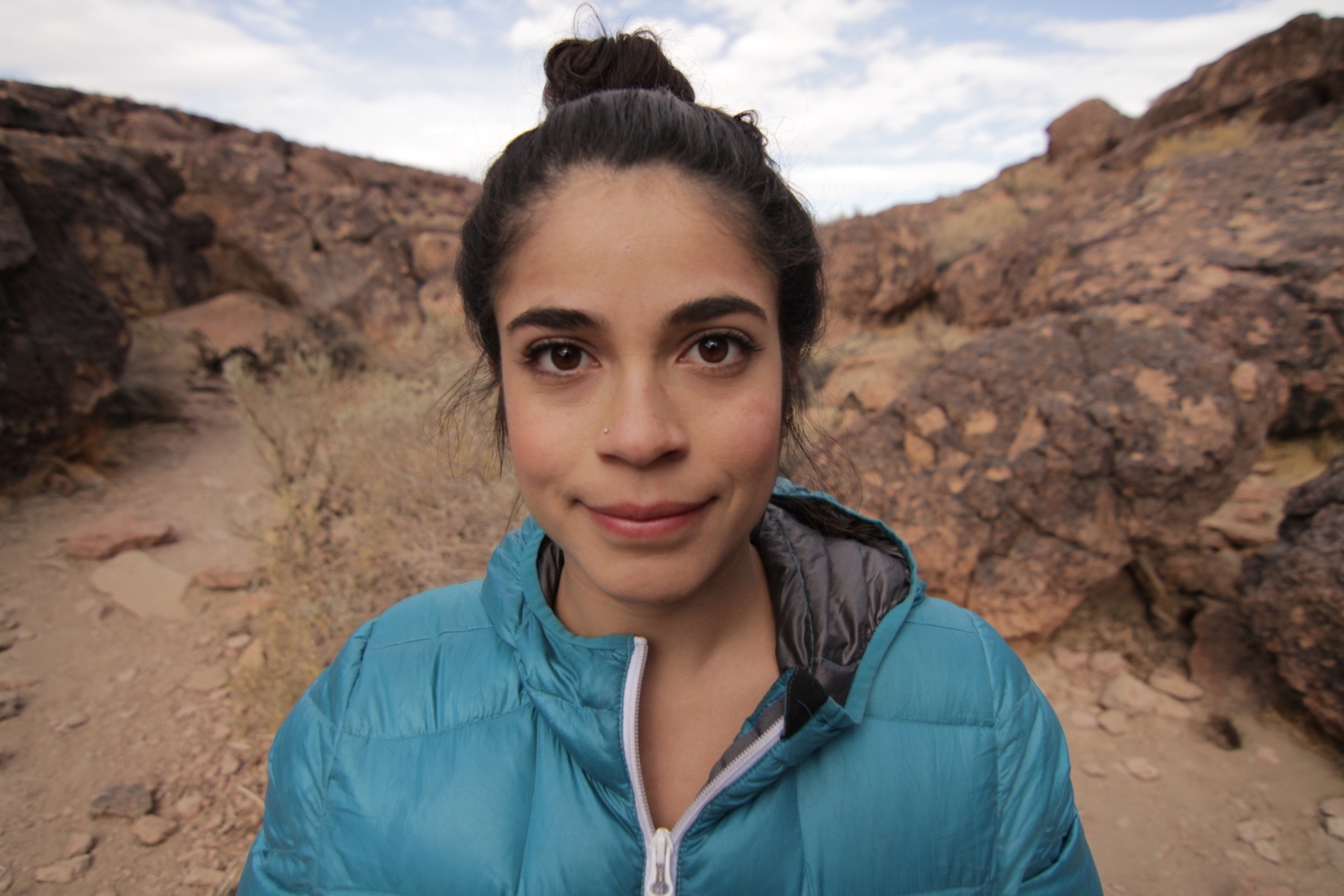 Eighteen years marks the distance between drawing your first breath and the assumption of adulthood. It also constitutes the precise length of time that Maricela Rosales spent bound by a neck and back brace.

Los Angeles-born Rosales was diagnosed with scoliosis at seven years old. At first, it was an inconvenience – something that slowed, but didn’t stop a kinetic child who thrived on movement. She still made school sports teams even though she “wasn’t really good at anything,” and kept her father on high alert as she pushed her physical limits. However, as she moved through her teen years and sought out more high-impact activities, Rosales began to experience a much deeper, more excruciating pain, complete with fatigue and muscle spasms that laid her out for days. Back-to-back automobile and sledding accidents only amplified the physical agony. “I was addicted to Vicodin,” she explains. “Not that I wanted to be.”

As the stress on her body increased, Rosales withdrew. She stopped playing sports and gained weight. Depression soon followed. 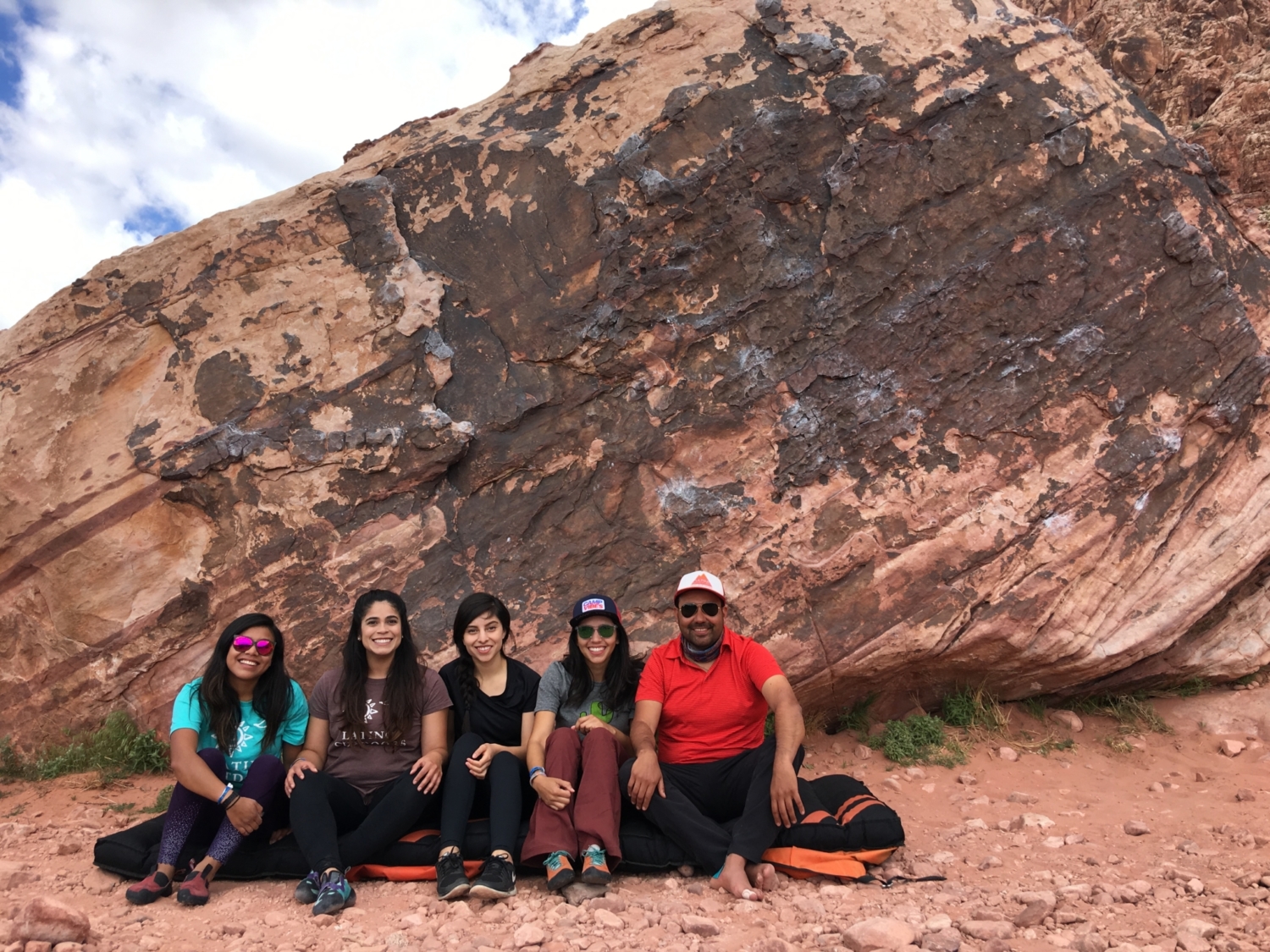 If you meet Maricela Rosales now, you’d never know that she spent her formative years battling chronic – and egregiously mismanaged – pain. She’s animated when she talks, so much so that her entire body moves in cadence with each word as if she’s never known stillness. Her childhood enthusiasm for adrenaline now manifests in myriad ways: Rosales doesn’t just hike and climb; she’s an outdoor leader, serving as Los Angeles Coordinator for Latino Outdoors, volunteering with the Access Fund, and working with climbing gear manufacturer Mad Rock. She’s also a recent graduate of the Nature For All (formerly San Gabriel Mountains Forever) Leadership Academy and a new recruit in the SHIFT Emerging Leaders Program. The back brace – and Vicodin – are relics of the past.

Rosales attended college at the University of California, Riverside. Money was tight, so she worked multiple jobs and commuted from Los Angeles, sometimes even sleeping in her car when exhaustion crept in. She was stretched thin, her own pain sent to the back burner as she hustled at school, work, and home, helping to care for her father as he moved through the stages of colon cancer. She rarely saw friends, but tried to nurture a romantic relationship. Fond memories of summer camp experiences and her father’s extensive National Geographic collection prompted Rosales to push her boyfriend – and herself – to explore outdoors, but those efforts fell flat. The relationship eventually ended, but her desire to experience the world persisted. Almost on a whim, she applied for a job at the school’s Recreation Center, hoping it would create some forward motion in her life.

Despite her physical limitations, Rosales was offered a gig at the school’s challenge course, hosting “group games and teambuilding.” If she pushed too hard, however – lifting heavy loads or belaying for long periods, for instance – she would injure her back, forcing her out of rotation. Still, she began to find community. A few co-workers she refers to as her “Climbing Godparents” encouraged her to explore the sport and suggested that she also consider taking up yoga and look into chiropractic adjustments as a means to alleviate the discomfort caused by her scoliosis.

And then she fell down a flight of stairs.

In that accident, Rosales injured both ankles, which temporarily confined her to a wheelchair, all but destroying her recent progress. During that time, she frequented the school’s Student Disability Resource Center and met another student whose experience paralleled her own. He encouraged her to continue seeing a chiropractor and to begin climbing again once she was able, and she followed his advice. “I was seeing a chiropractor maybe three times a week, and because of that, I got off the pain meds,” she recalls. “I weaned off slowly, took off the neck and back brace – I threw it away.” Rosales began to climb more frequently, even traveling up to Bishop, and as she grew stronger, the pain began to dissipate. Her posture – and outlook – improved drastically. 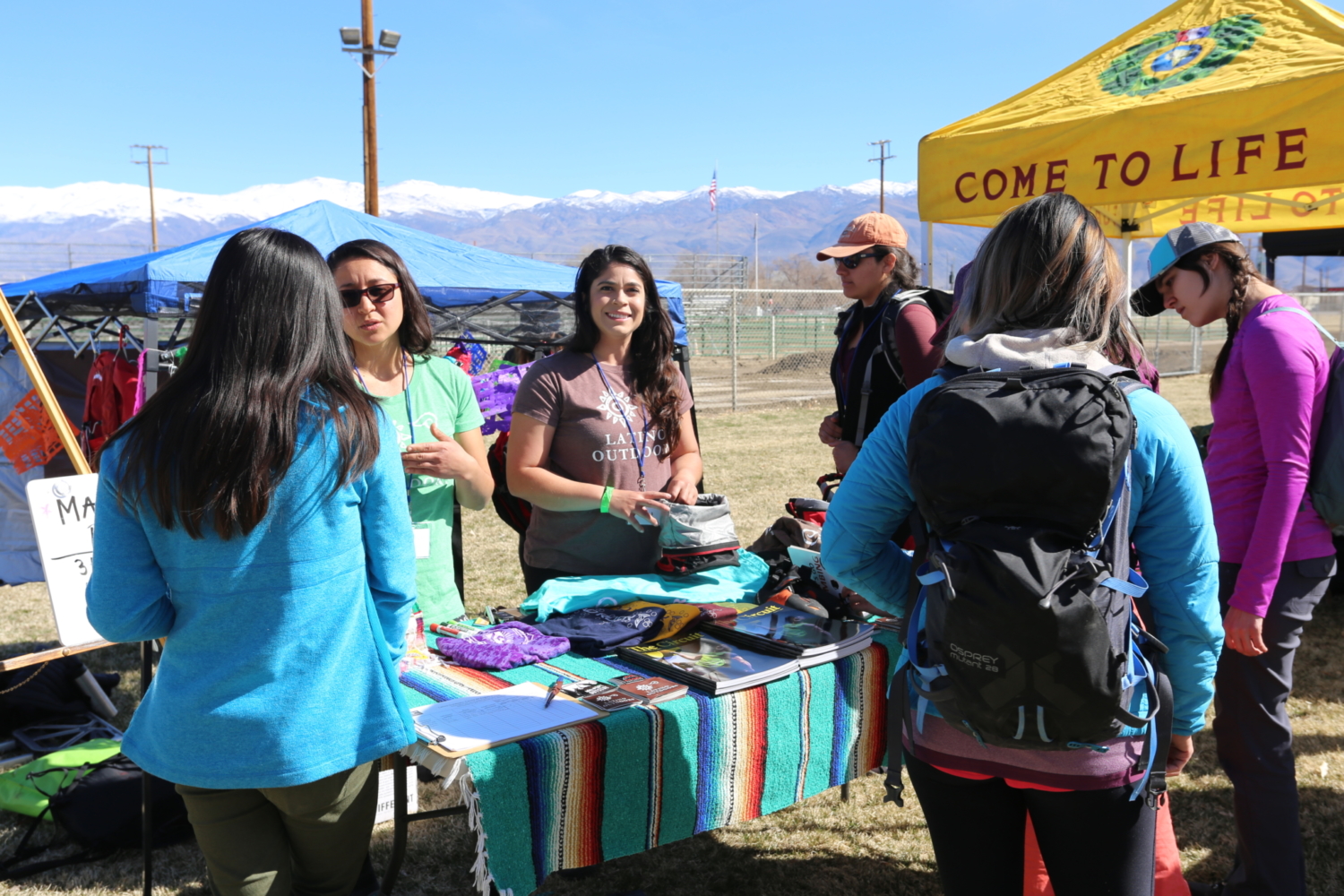 At the same time, her father’s health was declining. Still, he noticed his daughter’s physical and emotional improvements and prompted her to explain the changes. Nervous, she shared some photographs and cautiously began talking about her climbing practice. To her surprise, he was supportive – so much so that on his final day before being placed on permanent bed rest, he asked her to take him along as she ventured out to buy her first pair of climbing shoes. They went to the Mad Rock store in Santa Fe Springs, California.

“He was amazed that there were female climbers bouldering on posters and stuff,” Rosales recalls. “He said, ‘You know what, miha? I’m so happy because you’re changing in front of my eyes. You’re happier, you’re focused in school, and you’re still coming to help us out. I give you the blessing to continue this sport.’” He also offered this advice: “Don’t forget the people who have helped you, and who you want to help, because what you’re doing is amazing.”

Rosales’ father passed away within a few weeks of that outing, but his words lingered. While the climbing community rallied to ensure that she felt supported, Rosales knew that she wanted to find a way to in turn help others. A chance encounter with Mad Rock’s Kenny Suh at the climbing gym resulted in a gig with the company; to Rosales, it felt like the “universe was listening” after the visit with her father. As she dug into the work, she recalled his request to give back to the community and began thinking of ways to make climbing accessible to a larger audience. Another gym encounter, this time with Los Angeles Wilderness Training’s Executive Director Chelsea Griffie, led to a meeting with Graciela Cabello, then Regional Coordinator (and now National Director) for Latino Outdoors.

“I told her that I worked for Mad Rock and that I wanted to help in some capacity from a climbing perspective, but she had another vision for me,” explains Rosales. Cabello wanted her to instead lead programming for area families, taking them on hikes and educating them about the outdoors. Rosales dove into the role, not only committing to leading hikes, but also hosting campouts, organizing trail cleanups, forming relationships with bilingual rangers, seeking grants, and partnering with outdoor brands to help expand the organization’s reach. She’s grateful for Cabello’s encouragement that day in the climbing gym: “She brought the best out of me.” 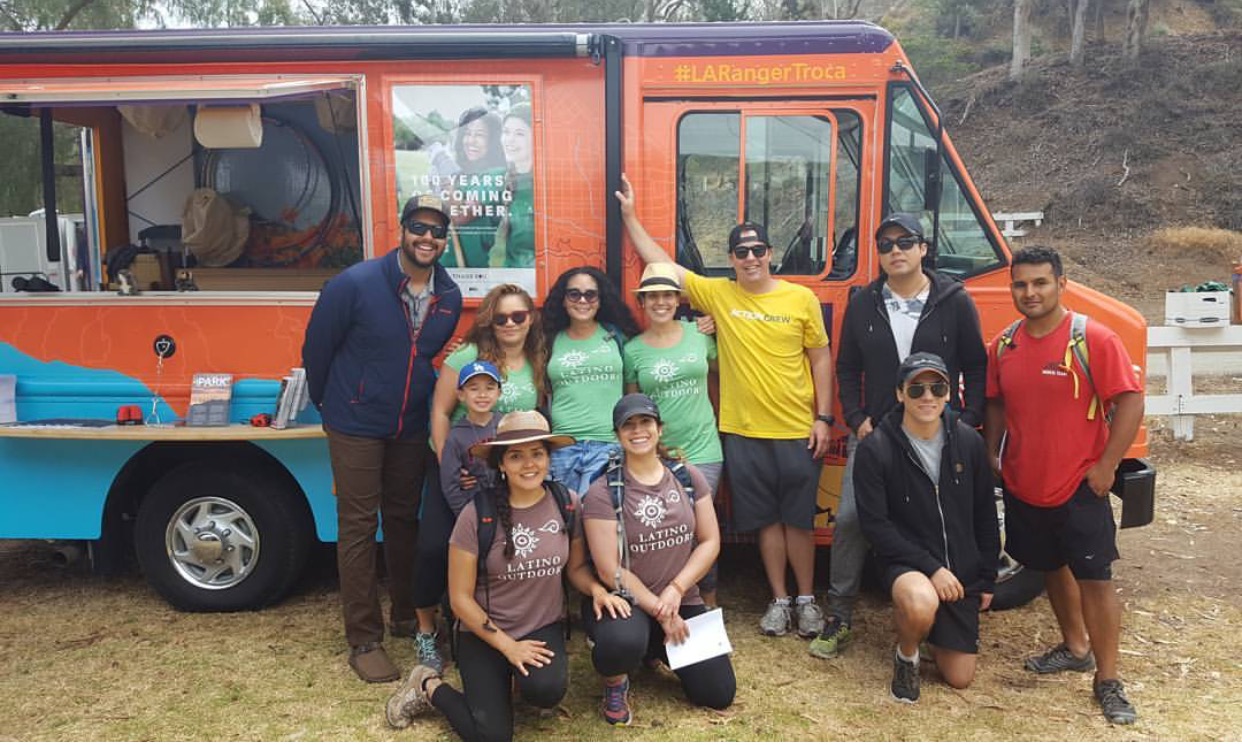 Through her work with Latino Outdoors, Rosales met Sierra Club organizer Roberto Morales who introduced her to the San Gabriel Mountains National Monument, an area she never visited, despite spending her entire life in close proximity. He also eventually became her mentor in the San Gabriel Mountains Forever Leadership Academy, a recurring six-month program that aims to nurture a young, diverse group of community stewards. Participants learn a host of skills during the experience, from community organizing to fundraising, and they’re expected to develop a personal project during the process. Initially, Rosales revisited her desire to improve climbing access, but then a different idea crossed her mind. “I was walking and tripped over part of the sidewalk that was elevated. Something smacked me in the face when I fell down – there was no real ADA [Americans with Disabilities Act] access for people with disabilities in the forest.” She presented the idea to Morales and he was on board.

Rosales graduated from the program in May. The result of her time in the Academy, informed by those eighteen years spent confined within a back brace and a previous stint working for the Disability Rights Legal Center, is the Abilities Project, “a civic outdoor education access project [that connects] individuals with disabilities to green and open spaces.” She hopes to not only educate participants on ADA access in outdoor spaces, but also help empower them to pursue advocacy. 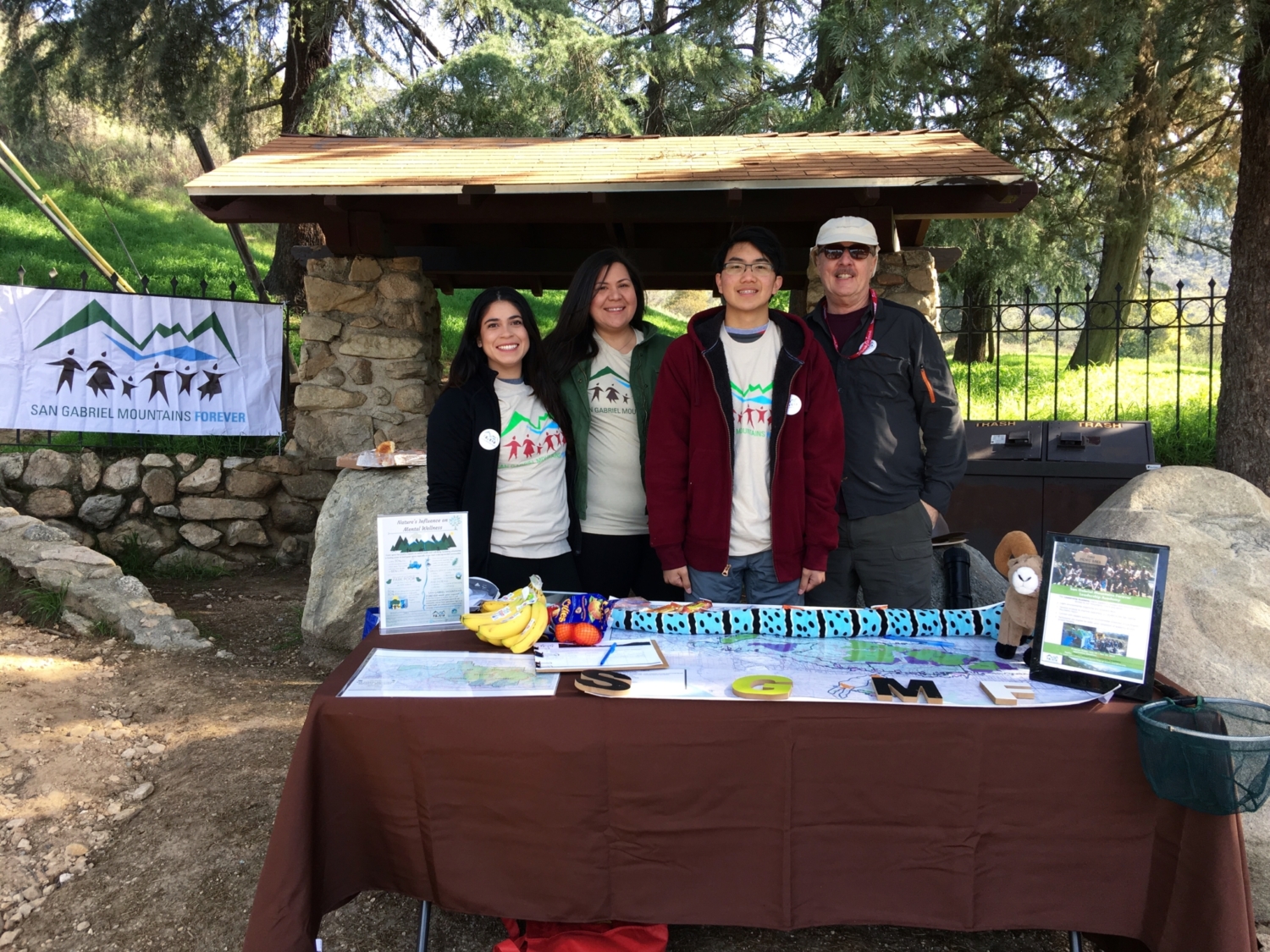 Whether it’s through Latino Outdoors, the Access Fund, or the Abilities Project, Rosales aims to do whatever she can to ensure a more equitable experience in the outdoors. “I feel like getting outside regardless of race, class, gender, or ability can enhance anyone’s quality of life – emotionally, physically, psychologically – and it creates a snowball effect: if someone does it, I want to do it, too!” While her work is altruistic, there’s no denying the very personal foundation for everything that she does. “I know that if I didn’t rock climb or if I didn’t do the outdoor activities that I do now, I would still be wearing a neck and back brace.”

Instead, she’s standing tall and paving the way for a more inclusive future.