Trailblazer: Elkpen
Trailblazing Role: Conservation-minded visual artist and storyteller linking urban environments and natural history
Location: Los Angeles, CA
I’m a Modern Hiker because: In the chaparral canyons of Southern California, I see and remember nothing is done, it is only in transition, and that gives me hope and inspiration to keep keep keep going ….blooms are ahead! 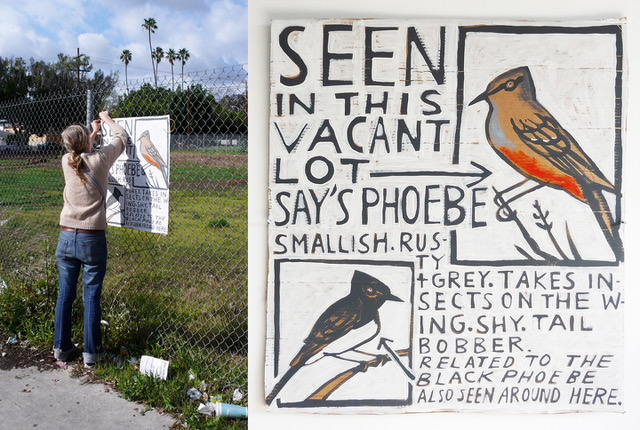 Armed with lengthy shopping lists and discount dreams, people crowd the aisles of the Westfield Topanga Costco store just as they do at any of the chain’s other outlets across the United States. The difference here is that unbeknownst to most shoppers, history unfolds just outside as they pile towering stacks of paper goods and bulk groceries into their carts.

If you drive straight into the Westfield’s insular grid of shops and parking lots without taking a second glance, you might not notice that the Costco exterior is wrapped with a series of impressively detailed murals depicting the natural and cultural history of the Los Angeles River. Its confluence sits one block north, a rather unattractive junction of algae-slicked concrete channels where the Arroyo Calabasas and Bell Creek join to form the lifeblood of Los Angeles. The murals, however, tell a different story.

I visited the murals last fall with my friend Brooke as we launched into what has become an ongoing exploration of the river and its relationship with the L.A. Basin. Slowly strolling along their length, I wondered at their intricacy and marveled at their contents. I saw the San Gabriel Mountains (“young and steep”), California grizzly bears (“once plentiful here”), and depictions of indigenous people with a deep history on this land (“here for 1000s of years”). I saw familiar plants and animals, and ached to see unfamiliar ones that were washed away in the course of modern human history. When I finally walked away from the artwork and toward the river’s confluence, I was flush with knowledge – and filled with questions. 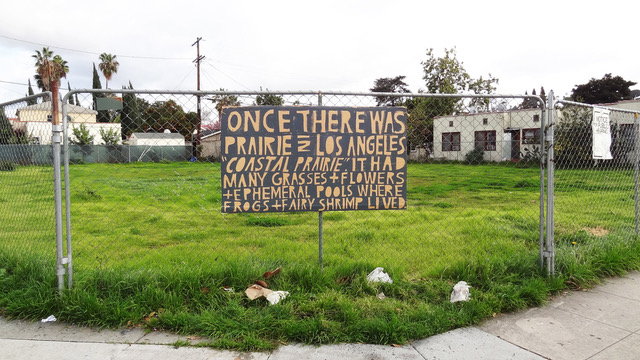 I’m tucked into a shady canyon in the San Gabriel Mountains foothills, enjoying the refreshing tang of an apple cider shrub on an excruciatingly hot afternoon. The drink’s mixologist, visual artist Elkpen, invited me into her home and studio to talk about her work, itself a confluence of urban and natural influences, not unlike the L.A. River. The murals are hers – or, really, all of ours. I want to ask about them, but first I want to know about their creator.

I learn that throughout childhood, Elkpen bounced between New York City and a farm in Nova Scotia. Upon first glance the two places would seem almost comically disparate, but as she talks, the artist begins to stitch together connections that challenge this notion. In Nova Scotia, she spent summers fully immersed in what we might traditionally view as “the outdoors”: hiking, canoeing, and camping in the woods while learning to identify trees and geologic formations thanks to her knowledgeable stepfather. That connection with the natural world took a different form back in the city, where Elkpen found solace in Brooklyn’s Pierrepont Playground. “I’d hide in the privet bushes and have these little imagination wanders,” she recalls. Her experiences in the park were just as impressionable as those times in the forest.

The ability to find a connection to the natural world wherever you go is an important one – “the outdoors,” after all, isn’t some faraway place; it’s all around us. In fact, when I ask later in our conversation about her “favorite place” in the L.A. Basin, Elkpen answers, “Right here.” She doesn’t necessarily mean her backyard, where we’re sitting, but the idea of appreciating the present moment and place. She tells me the story of a book gifted by her husband. It was written at the turn of the last century by a French naturalist who dreamt of becoming a marine biologist, but didn’t have the means to pursue that career. Instead, his school advisor suggested the young man focus instead on noticing what was happening closer to home. “He wrote this tome about all of the insect life that he observed in his yard,” she explains. “If you stop anywhere, you’ll see stuff going on that’s so beautiful and so amazing. But it really takes stopping, and I suppose that’s why I just say ‘here.’” 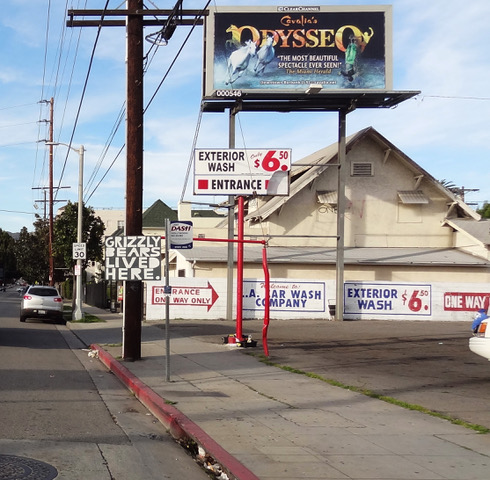 Despite spending so many formative years between New York and Nova Scotia, Elkpen was actually born in Los Angeles and returned frequently before settling here a decade ago with her husband. “L.A. is a particularly interesting place to me because the wilderness is so close,” she says. She laments the fact that people deride its natural beauty, that they dismiss it as a “desert,” and that they don’t realize the biological riches contained across its wide spread. Despite paradise being paved over, as it were, Elkpen feels that the natural history of this place is very much present, especially when compared to her former home. “I feel like there’s something very special here that is still here,” she says. “I think in New York, the heartbeat of it is very faint now. But here you can still really connect with it.”

Her experiences in New York actually helped carve the path that would lead not just to Los Angeles, but also to Elkpen’s creative work as a conservation-minded artist who is able to find a connection with the outdoors through even the tiniest cracks in the sidewalk. She’s been drawing since childhood, but the idea of focusing her talents on flora, fauna, and natural history sprouted from two unique moments in her career. After spending some time in her young adulthood knocking around L.A. as a muralist, Elkpen returned to New York and chanced into a gig with a map-making company. There, she painstakingly restored lettering onto massive vellum sheets to breathe new life into original hand-drawn street maps.

As she wrapped up that project, a friend alerted her to an opportunity with the Bronx Zoo and the Wildlife Conservation Society, creating illustrations for a tiger exhibit. Through that process, Elkpen began reading about ecology and conservation, while simultaneously discovering the beauty of wildlife guidebooks. This new interest followed her back to L.A. and blossomed into what would become a purposeful series of projects that bridged the gap between urban and natural, conservation and education.

“It was within Hollywood that my environmental art kind of kicked into high gear,” she says. Elkpen and her husband were living in an “underserved” neighborhood on the eastern edge of Hollywood. She worked from a small office on the second floor of their apartment and became enchanted with the sheer number of birds that would flit past her treetop vantage. At the time, Cornell University was conducting its Great American Bird Count, and an idea quickly sprouted.

“I thought – well, nobody in my neighborhood has a bird guidebook, so why don’t I make a guidebook on the wall?” After some coaxing, Elkpen secured space outside of a local business and set to work painting a mural for the community to enjoy. The process was not only a nod to urban wildlife, but also a way to democratize outdoor education and encourage an exploration of urban ecology. “It just got me really interested in how conservation and environmental awareness can work on a very local, micro level,” she says.

Elkpen’s neighborhood efforts also included small, text-heavy signs, a holdover from her map-making experience in New York, which spawned a “graphic love” of how letters look. The simple cardboard placards (you can find some of them here), a sort of subversion of the billboards plastered across what feels like every stationary surface in L.A., operated through the element of surprise and by eliciting wonder. A statement like, say, “Grizzly bears lived here” might shock – and delight – people who aren’t familiar with the natural history of this place. They also served as a sort of ongoing “textbook” for her community. “Learning something gives you agency, gives you control, gives you a sense of empowerment in your life,” she says.

This was especially important on her block; one of its corners served as a de facto hangout place for houseless people who lived in the neighborhood. Elkpen recalls hanging a sign around a eucalyptus tree with the simple message, “ This is a eucalyptus tree.” The piece hung for two weeks before she removed it. During that time, she frequently heard references to the tree from people congregating at that corner. One of the regulars, a man named George, asked if she painted the sign. “I said, ‘Yeah, I did,’” recalls Elkpen. “And he said, ‘You know, people are really sad that you took it down.’”

I’ve walked along approximately half of the L.A. River’s nearly 50 miles. By “along” I mean “as close as possible,” since many segments of the river are fenced off and inaccessible to the public. In most places, like at its confluence, it’s paved over with concrete, a flood control measure designed to avoid swamping the city after a deluge. Sometimes strips of foliage decorate its midsection like floating trash islands, unsightly repositories for water-whipped refuse twisted around tree branches and stuck in the underbrush. Other times, the river appears completely natural, a vibrant oasis crowded with snowy egrets, Canadian geese, and black neck stilts, the latter’s pink legs the only shot of color in the nearly pristine channel.

Elkpen came to the river through a chance encounter at a stationery store where she was employed in the city’s Larchmont Village neighborhood. There, she met a man who introduced her to Lewis McAdams, a poet and river champion who founded Friends of the Los Angeles River, a nonprofit organization dedicated to advocacy, education, and stewardship around its namesake waterway. The group organizes annual cleanups along the river, and Elkpen created a reusable tote bag gifted to volunteers during one such event. In the process of conceptualizing that artwork, she began learning more about the river’s importance through thousands of years of natural and human history.

“It’s not a very big part of our city, or our experience as citizens here, to think about the way water works in our city, and the way the river works,” she says. “I just feel like natural history imbues everywhere we live and everything we do, and it’s not appreciated for the impact it has on us.” When Elkpen was approached with the opportunity to create river-centric artwork for the Westfield after the corporation’s vice president of design, Steve Hamilton, saw her ‘Birds of Hollywood’ mural, it offered a chance to make that hidden history more visible – or at least more visible to the people who happen to walk the Costco perimeter.

“An interesting challenge doing environmental art is, how do you talk to people who aren’t thinking about the outdoors? Those are really the people you have to reach,” she says. The day I viewed the murals, I remember watching a woman push a stroller down the sidewalk. She stopped and hung for a moment, her eyes floating up to fix on something I couldn’t discern. I wondered if she saw an image or read some text in that panel that spoke to her – or if she even recognized that she was looking at a rendering of a long-ago L.A. River. Whatever it was, I watched the edge of a smile form as she walked away.

“If people don’t experience nature, we’re not going to notice when it disappears,” says Elkpen. “If you can provoke care and love through wonderment or curiosity, then there’s some chance of doing something about it.”

all photos courtesy of Elkpen