Trailblazer: Benny Isaac Jacobs-Schwartz of Birds by BIJS
Trailblazing Role: Photographer, naturalist, educator, and bird nerd
Location: Los Angeles
I’m a Modern Hiker because: I translate my deep love of birds and nature through social media, with the goal of inspiring others to care about the wild spaces that often times go unnoticed. 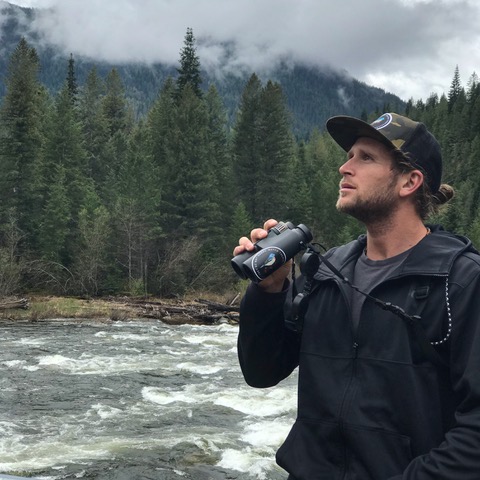 My earliest avian encounters were marked by low-level trauma. One particularly vivid childhood incident saw my cousin’s cockatiel, a colorful, but aggressive creature, land on my outstretched finger, then suddenly hawk a chunk out of my tender lower lip. Another misadventure involved a neighborhood park and a particularly loose-boweled bird that shat on me not once, but twice – on two separate days, both times underneath the same tree. I eventually shifted to a generally pro-bird stance, but it required the assistance of a trip to the Serengeti, a lengthy hike along the Pacific Crest Trail, and strangely enough, the unlikely iridescent beauty of a few select New York City pigeons.

Some people, however, need far less convincing. To them, spotting a bird in flight is pure joy. Their necks are perpetually draped with binoculars, their ears forever attuned to distant warbles, their wallets eternally drained into Audubon Society coffers. While his particular specifics might differ, Benny Isaac Jacobs-Schwartz is one of these folks – and he wants you to be one, too.

“I’m trying to shift the perception that people have of bird watching or connecting with birds,” says the 28-year-old guidebook author, outdoor guide, and avian enthusiast. “You don’t have to be 80 years old with a bangin’ 401(k) to come out and look for birds.”

Unlike some bird nerds of yore – say, John James Audubon himself, who spent his formative years between a Haitian sugarcane plantation and the French countryside—Jacobs-Schwartz was raised in the urban sprawl of Los Angeles. As many Angelenos do, he found a connection to the natural world, climbing orange trees and playing with his golden retriever among the ferns growing along the side yard of his childhood home. Family trips along the California coast – places like Ventura and San Luis Obispo and Cambria – only served to expand his world.

During his high school years, Jacobs-Schwartz also participated in a program called Adventure Treks, where he joined outdoor educators and fellow teens in places like Alaska, Montana, and British Columbia to learn adventure sports, environmental ethics, and leadership skills. It was a life-changing experience. “Probably the most formative experience for me was getting introduced to these mentors, these instructors who I thought were gods at the time,” he says. “I was like – that’s what I want to do.”

Inspired by his experiences during the Adventure Treks program, Jacobs-Schwartz attended the University of California-Santa Cruz, which he calls an “amazing community of naturalists and nature lovers.” It was during a 2011 study abroad experience in Costa Rica – a place he visited as a teenager, where he had his “mind blown” – that he fell in love with birds. When he returned to Santa Cruz, that passion only grew once he looked to the sky. During a ten-week naturalist training program called the Environmental Studies Natural History Field Quarter, he found a new mentor in instructor and seabird biologist Breck Tyler. “I remember distinctly telling him, ‘Hey, Breck, I want you to help me be the best birder I can be.’”

Jacobs-Schwartz devoted himself to his studies – and to birding – and began experimenting with avian photography, eventually amassing an impressive collection. With encouragement from his father, along with assistance from Tyler and others, he used those photos to build what would become his first book, the Field Guide to Birds of UC Santa Cruz; he is currently working on the second edition. “UC-Santa Cruz is such an amazing spot, and it would be such a shame if you came here and you didn’t know what was all around you,” he says. “I wanted to give back.” 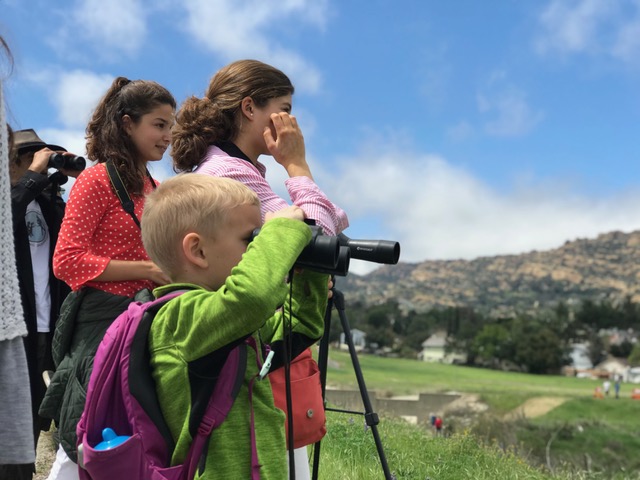 If there exists a theme to the multitude of gigs Jacobs-Schwartz has undertaken since his college years, it would entail carrying out that idea of giving back to the natural world – and giving to those who would find solace, joy, and enchantment within it. He spent this summer working as a naturalist at a glacier lodge on Alaska’s Kenai Peninsula, guiding people outdoors while simultaneously indulging his passion for ornithology (“I was kind of losing it when I came up here… I didn’t know how good the birding was right where we’re based!”). So far, he’s seen several “lifers” – a term birders use for their personal bucket list species – including the harlequin duck (“arguably the other most beautiful duck in North America” next to the wood duck, in his estimation) and the Arctic tern (“super sweet”).

Typically, however, Jacobs-Schwartz spends summers guiding in the Sierra, not that he doesn’t mind the Alaskan interlude. He’s also led international gap semester trips for college students, participated in biological fieldwork for the University of Illinois, and conducted bird biology research back in Southern California. His newest endeavor, however, is the closest to home – and to his heart. Under the banner of Birds by BIJS, Jacobs-Schwartz organizes donation-based urban bird-watching walks for curious Angelenos. “L.A.’s full of people who generally like nature…but there’s also a ton of people here who don’t know much about it,” he says. He realized that by rotating through several bird “hotspots” around the region – urban-wild mashups like Franklin Canyon, Malibu Lagoon, and Sepulveda Basin – he could help connect Angelenos to the natural world right in their backyard.

On a typical walk, Jacobs-Schwartz totes along binoculars and a spotting scope, setting up near water to increase the odds and ease of tracking birds, especially for first-timers. But his trips aren’t just about the winged visuals. “First and foremost, I make it cool and fun, and then I slowly integrate the knowledge and the history and the ecology into it,” he says. “I trick you into coming on something that’s fun and easygoing, and then you leave with some sort of profound understanding on hummingbird territoriality and courtship displays.”

He’s only half-joking about that “profound understanding” – while he loves invoking a pure enthusiasm for birding, Jacobs-Schwartz also wants participants to come away with something larger. “Birds are just kind of the key to unlocking that nature consciousness that I’m so ardent about wanting to pursue myself,” he says. “It’s really about consciousness shifting for me. My goal is to wake people up – get off your screen and come outside. A lot of it is what I call ‘ancestral awakening’ and remembering what it’s like to be your best self.” Jacobs-Schwartz points to his personal experience and how it fuels the call to help others seek their own. “I found that a lot of my city-borne anxiety dissipated during my time outside,” he says. “I realized that – wow– I feel so happy when I’m outside, I feel so stoked when I’m engaging with my full senses.” 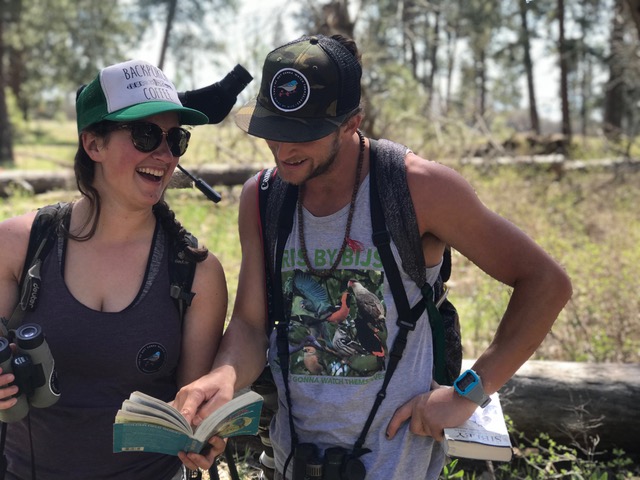 There’s another goal, too – helping others learn about the importance of birds as a tool for understanding local natural history, and as an indicator for ecosystem health, since they sit in the middle of the trophic food web and act as a barometer of what’s happening with the environment and with organisms both above and below them on the food chain. “Birds are just fast enough and just colorful enough and just interesting enough to actually draw people’s attention and really kind of pull them in to wanting to care more about nature in general,” says Jacobs-Schwartz. “My kind of subtle, long-term outcome for my participants is that they care enough that when things coming up, vote with their dollars, talk to people that represent them, conserve those spaces, and to give a crap.”

But at the heart of it all – not just the bird walks and other work, but also his prolific social media presence – is a simple desire to help others connect with birds, and to the natural world. Jacobs-Schwartz points to not only his own birding outings, but also those conducted by local chapters of the Audubon Society, coupled with an array of resources created by the Cornell Lab of Ornithology, as the perfect gateways for anyone to get outside and learn a little bit about birds and the world around them.

“I want to help usher in this new era of bird watching, flood it with positivity, and make it accessible for all types of people,” he says. “Nature is here for everybody – you don’t have to be anything other than what you are to go out and appreciate it, and to understand that you’re going to get something from it.” While he’s conscious of using his own image – through his Instagram account, YouTube channel, and gear shop – to help draw a younger, more diverse crowd to birding, he wants others to come away empowered.

“I want you to take away that you have the confidence and the ability to go explore and have your own experience without me, that you don’t need me for anything, that I’m just a catalyst to your own personal awakening,” says Jacobs-Schwartz. “I’m just a guy who’s stoked.”