Although homeowners aren’t as threatened anymore and it’s out of the headlines, the Station Fire is, indeed, still burning.

From the most recent Google Maps update, it looks as if Santa Anita Canyon has been spared for now. Weather conditions have prevented firefighters from establishing a flank in the area to fully protect it, but there hasn’t been any southward movement from the fireline in some time.

Mount Wilson, Stony Ridge Observatory, and Newcomb’s Ranch have been spared, as has 3,000 acres of unburned forest west of Chilao. However, Chilao camp itself, along with Devil’s Canyon and the Singing Springs Cafe off the Angeles Forest Highway have all been burned, as have large portions of the wilderness near Waterman Mountain – some of the most majestic hiking areas in all of the San Gabriels. 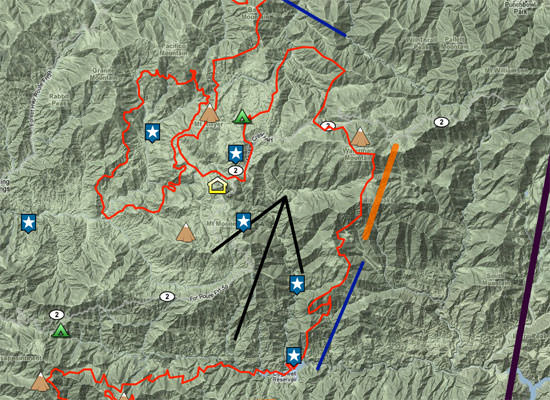 Even though the burn areas are large, we’re starting to learn that pockets of forest have been spared from the flames. A reporter from the Pasadena Star-News was allowed into the burn area and found the north face of Mount Wilson and the Switzer’s picnic area to be in pretty good shape, even though he noted that boulders had become dislodged from many trails.

He closes with this gut-wrenching paragraph:

It’s hard to say exactly what the future of the forest holds for recreational users: some areas will be reopened, some may not be, at least in the near future. But even in the best-case scenario the loss of great wilderness areas is very staggering, and a little hard to take once you see it with your own eyes.

Hopefully we’ll have a clearer picture of the future of the Angeles sooner rather than later.