On Sunday, the San Gabriels and San Bernardinos were hit with a surprise summer monsoon storm – one that dumped 4 inches of rain in an hour on Mount Baldy. The National Weather Service described it as a “once every 500 years” weather event and many of the mountain communities are still digging out of the mud and storm debris. Modern Hiker reader Rebecca was on Mount Baldy and was caught in the storm just after summiting. This is her story of that afternoon.

I have become a bit of an outdoor nerd over the past two years. I love it. Nothing makes me happier than running around mountains. The mountains are where I find peace and everything feels right.

My first big adventure was the “Rim to Rim Grand Canyon” hike in October of 2013 and I was totally over geared – my pack was over thirty pounds for a day hike. I was worried something could go wrong but nothing did. I fell in love with the outdoors and was off to my next adventure. As my hiking progressed, so did my packing – I began shedding more and more gear wherever I could. I do just about everything in trail runners and bring a minimal amount of gear, food, and water – now the heaviest piece of gear is my camera. 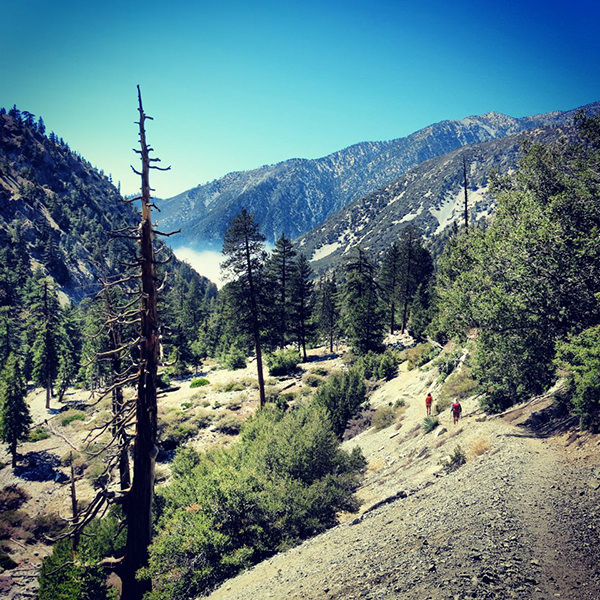 How could you argue with that scenery?

A group of friends and I day-hiked Mt. Whitney in July of 2013. As a native of Los Angeles I really enjoyed the “prep hikes.” They introduced me to the Los Angeles backcountry, a side of LA that I was totally unfamiliar with. These hikes were also good because I got to know my boundaries, learn a lot about how to handle unexpected situations and especially weather. I had no idea how quickly the weather can change in our mountains, especially in the winter – and along with those lessons I also learned that getting stuck in backcountry snow, wind or hail storms is definitely not fun.

But it’s summer now and I am headed back to Mt. Whitney in a few weeks, so I figured to train I would start with a local trail I had yet to complete: Mt. Baldy summit via the Old Baldy Trail.

On Sunday the weather was in the mid 70’s with a little drizzle. I texted my brother to let him know I was heading up Mt. Baldy and that I would check in by 6:00pm at the latest. I stopped to talk to a ranger about weather and figured he could help me decide if I should go for Old Baldy Trail or take the Ski Hut Trail which provides more coverage in case of lighting. He said there was no thunder or lighting yesterday, that the weather felt great, and that I should go for it.

I always hike with friends but nobody was up for this crazy hike so I figured I could do it on my own. I had just returned from two weeks in the Himalaya and had made it to Everest Base Camp in a three day blizzard, dodging rock slides in white-out conditions. It was bitter cold above 17,000 feet… so a 12 mile solo up Old Baldy Trail? No big deal, right? 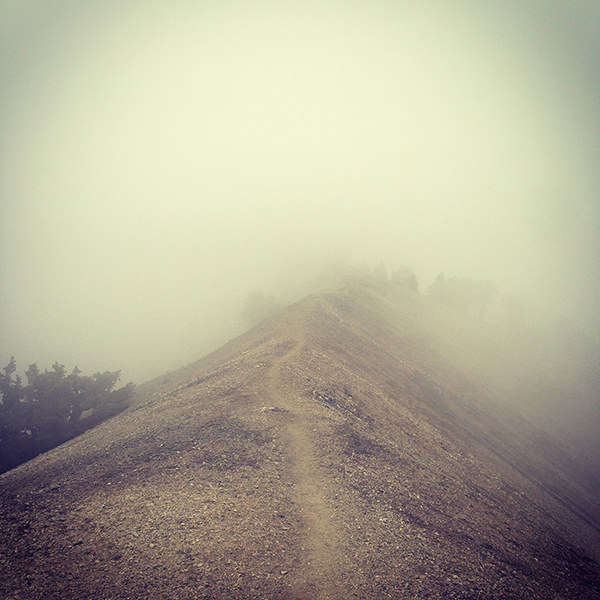 Old Baldy is tough. 12.8 miles with 5744’ of gain. What would normally take me three hours took four. I reached the summit at 3:00pm and there were ten others when I topped out.

It started to drizzle. My gut told me to go down the Ski Hut Trail but that meant I would have to hitch a ride back to my car. I met a man named Arun who also came up Old Baldy Trail and we decided to head down together.

Within a half an hour that light drizzle turned to rain and thunder began to roar. Lighting struck the trail ahead of us. We were on a exposed ridge above 9000 feet and with no cover in sight. We ran to the tree line, stashed our bags, and crouched under the first tree we saw.

Within minutes the rain turned to hail. We kept moving from tree to tree to get better coverage. We moved around so much it was not clear where the trail was anymore. We were soaking wet and covered in hail. The thunder and lighting were relentless. I was scared, getting cold and beginning to shiver. Arun kept me calm and helped me stay warm. I was in shorts with a light rain jacket was and he was worried I was going into hypothermia. When he asked me for my last name I knew we were in trouble. 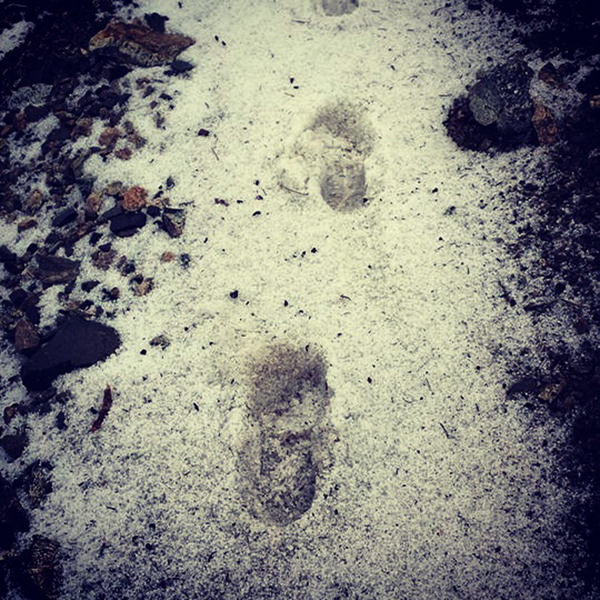 Hail on the Trail – Photo by Arun Ponnusamy

We decided to make a move. It had been nearly an hour in the monsoon rain. It did not feel like the storm was going to let up and we needed to get lower. Our first priority was to find the trail. We stumbled around on the side of a ridge. The rain was so heavy you could not make sense of anything. Arun had a trail map downloaded on his GPS and saw the trail was above us. We hiked back up to the ridge and were back on course. The storm was letting up. I have never been happier to see a trail.

The next six miles was slow going. Rain on and off. We would lose the trail, backtrack and get back on it – or think we were off course because the trail was so washed out we could not believe it was same thing we hiked up. We had to use our hands and feet to get across many parts. It was dark by the time we crossed Bear Flats. Finally, only two miles to go.

The rain stopped and we heard helicopters in the canyon. Arun had a headlamp, I did not. Mudslides everywhere. Trees and plants were flattened out on all side of us. It took every ounce of energy to navigate the trail in the dark. The trail ended and we were at a swollen creek, which was strange because neither of us remembered crossing a creek. It was pitch dark. I could not believe we were lost again – but after scouting around we found the trailhead sign – this wasn’t a swollen creek, this was Bear Canyon Road.

Within a minute flashlights appeared. It was Search and Rescue. We gave them all the info we had on who we saw at the summit, what they looked like, and the routes we believed they took. Within another 100 feet we ran into LAFD removing a body from a car that was swept up in the flash flood.

We got back to Baldy Village to find a ton of search and rescue vehicles, fire department, ambulances, crevasse rescue and news vans. Baldy Lodge never felt so good. We ordered a beer, thawed out by the fire and spoke with several locals displaced by the storm. It was bittersweet. I was very confused by what just happened, sad for the losses, but happy to call my brother and tell him I was safe.

The takeaway… Sunday was a “perfect storm” of bad decision making. I got cocky. 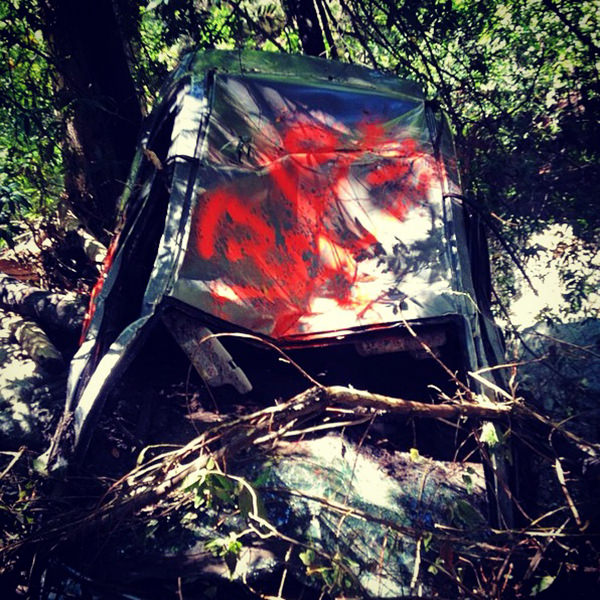 I’ve been taught a few lessons in previous winters but completely underestimated summer. It is one thing to “go lite” but it is another thing to “go stupid.” I went to 10,000’ with potential for rain in shorts, a tank top, light second layer and a rain jacket. I had a spare lightweight jacket and longer pants in my pack that were drenched by the time I wanted to put them on. In other words, pack cover and dry bag – both which I own – should have been in my pack. I also forgot my headlamp and left my emergency kit at home because I never use it. 10 essentials are key and I will never hike without them again.

I was also reminded just how dumb it is to hike alone. I intended to find someone to head down with but that is only because the weather started looking nasty. What if there was nobody at summit or if I would have summited earlier in the day when the weather looked better? I may have headed down solo and got caught in the flash flood. It could have been worse.

Furthermore, a firefighter on the scene was shocked I started so late. Most thunder and lightning storms hit in the afternoon. I knew that but began at 11:00am. I’m getting lazy.

Last but not least, I texted my brother to let him know I was heading up Blady but did not tell him which trail I intended to hike. It’s important to be detailed. If an emergency happens, first responders do not need to waste time or resources.

Bottom line; I was not clear on the effects a summer monsoon can have on hiking and if I want to play in the backcountry I need to get educated. I was not 100% clear on how to navigate the thunder and lighting. What if we did not have the GPS app or Arun’s phone went dead? I want to be solid on the moves I should make under rain, thunder, lighting, bears mountain lions, rattlesnakes, ankle rolls and everything in between. The Wilderness Travel Course is in my near future.

With all that said – trust your gut. My gut told me go down the Ski Hut Trail which would have given me more coverage but my ego wanted me to finish Old Baldy Trail. In reality I knew it was not the best day to climb Baldy in the first place. I will not make any of these mistakes again.

All photos by Rebecca Brinegar unless otherwise noted.