The Forest Service Won’t Charge You $1500 for Photos

You’ve no doubt seen the blog posts and outrage showing up in your social media feeds lately – a new Forest Service proposal is going to charge everyone a $1500 permit fee to take video or still photography in Federal Wilderness Areas! If they catch you without a permit, you’ll get charged $1000 per violation! What about the Free Speech and America and This Land Is Your Land and (cue explosion noise).

I watched as the frequency of posts increased – and today it seemed to hit critical mass. Every single person I know who’d ever even been outside was furious about this proposal.

I didn’t post anything about it. The story seemed too simple, too boneheaded, so clearly over-reaching that there was no point in even addressing it. If the new policy was what people were saying it was, not only was it never going to hold up in court, but it would also be absolutely unenforceable. Do you think the Agency that’s spending all of it’s money fighting fires and doing its best to maintain 193 million acres of land with perennially underfunded budgets is going to have the time or money to chase down people taking selfies at the Bridge to Nowhere to slap them with a fine?

This morning, I mentioned it on the Modern Hiker Facebook Page (with the disclaimer that this was probably never going to happen and was likely only spreading on social media because of its clickbait-ready headline potential), and some of our readers dug into the language of the actual proposal to look at what was actually going on.

Long Story Short: The Forest Service is not going to charge you $1500 to take a photo. 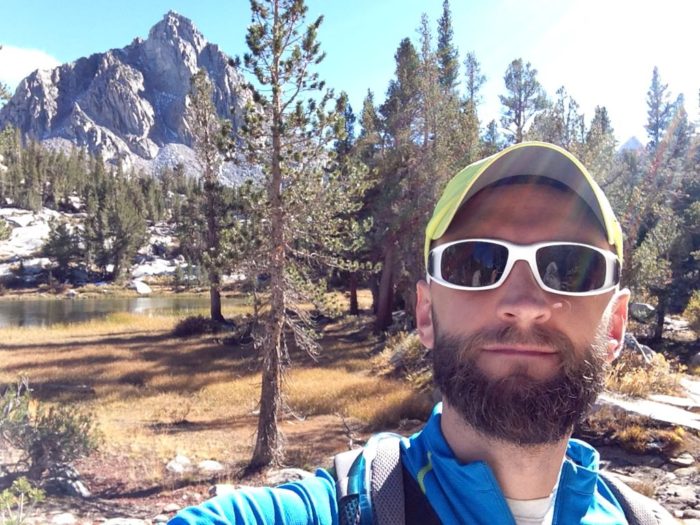 If you take a minute to read the actual proposal (which is tough because there are no fun GIFs or numbered bullet points), you’ll see that all the regulations do is make sure that any commercial motion picture or television crews respect the very stringent guidelines of the Wilderness Act if they film inside a Wilderness Area.

I’ve worked in entertainment for the past 11 years, and I can tell you one thing – remote shoots are incredibly disruptive. They’re loud, messy, use a ton of electricity and artificial light, and worst of all – the coffee is usually terrible. And this policy doesn’t even ban THOSE from happening, all it requires is that any motion or still photography shoot: (PDF)

If the shoot is in a congressionally designated wilderness area, there are a few other guidelines. The shoot must:

Not quite as outrageous when you actually read the policy, is it?

“But what about ‘still photography’?” you’re asking. “Doesn’t that mean I can’t take photos and post them on my hiking blog or sell them in a gallery?”

Here’s what the proposal says:

The Proposed Directive makes no changes to the policy on still photography. No permit is required for most still photography, including still photography in wilderness areas. The permit requirement for still photography does not turn on whether the proposed activity is commercial, but rather whether it (a) takes place at a location where members of the public are generally not allowed or where additional administrative costs are likely or (b) uses models, sets, or props that are not a part of the site’s natural or cultural resources or administrative facilities.

So – your epic mountain shots from the John Muir Wilderness are not affected – unless you were airlifted to some remote mountain peak in a restricted special study area or had to build a replica log cabin to get your shot.

In case you’re wondering why the Forest Service is doing this now, the policy has actually already been in effect for several years (without any incident), but this new proposal closes a few loopholes and ensures greater protection for the Wilderness Areas where film crews may want to set up shot, and also requires those crews to look outside of Wilderness areas before they decide to shoot inside them instead.

How did it get this far? Well for one, when the story appeared in The Oregonian, reporter Rob Davis used 598 words spelling out worst-case scenarios, dropping vague First Amendment implications, quoting two opponents of the proposal while implying the Forest Service spokesperson had no idea what they were doing, and noting the places where similar policies had not been enacted – without once explaining what the actual proposal was.

This shoddy reporting was picked up because it made for great outrage-inducing clickbait and fit into an already existing political narrative. Thus, “Let’s make sure any shoots on Wilderness land adhere to the Wilderness Act” became “THE GOVERNMENT WON’T LET ME TAKE PICTURES OF TREES.” 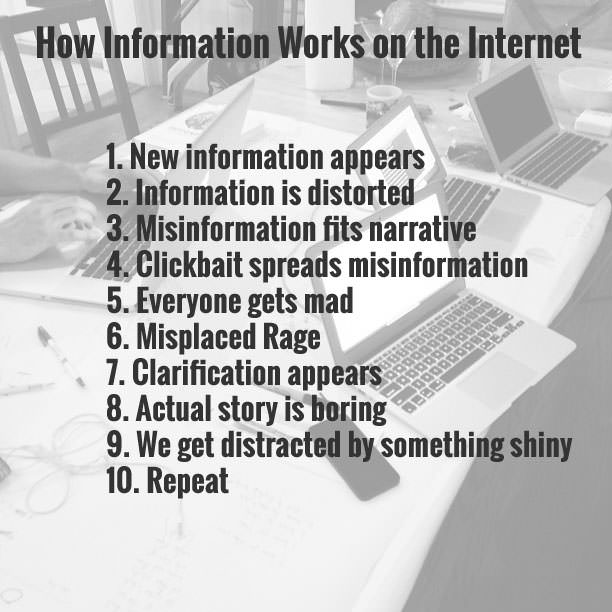 Shoddy reporting led to misinformation, which became irresistible clickbait for lots and lots of outdoorsy web sites – and so we get a story that actually isn’t happening but is scary and outrageous enough to get lots of clicks and shares and comments.

If only anyone actually took a few minutes to read that rule proposal … especially The Oregonian staff- we could all still be talking about how the iPhone 6 bends in your pocket instead.

Readers were wondering what the definition of “commercial” purposes was. Turns out, the Forest Service has that in their documents, too – and all that hand-wringing about journalists not being able to report with this new proposal? They’re already accounted for.

The use of motion picture, videotaping, sound-recording, or any other type of moving image or audio recording equipment on National Forest System lands that involves the advertisement of a product or service, the creation of a product for sale, or the use of actors, models, sets, or props, but not including activities associated with broadcasting breaking news. For purposes of this definition, creation of a product for sale includes a film, videotape, television broadcast, or documentary of historic events, wildlife, natural events, features, subjects, or participants in a sporting or recreation event, and so forth, when created for the purpose of generating income.

Reader Fitz chimed in with some great points and a real-world example. That $1500 fee is not a flat fee – on a commercial shoot Fitz was involved in, the production was only charged $45 for the permit.

Over the past 24 hours, commenters, readers, and other writers have highlighted some potential gray areas that do need clarification. In an effort to focus discussion on those areas and not on things that are already answered in the proposal itself, I have created this helpful flow chart based on my interpretation of the Forest Service documents and several others’ reactions to the same. Please feel free to share this anywhere and everywhere you can. 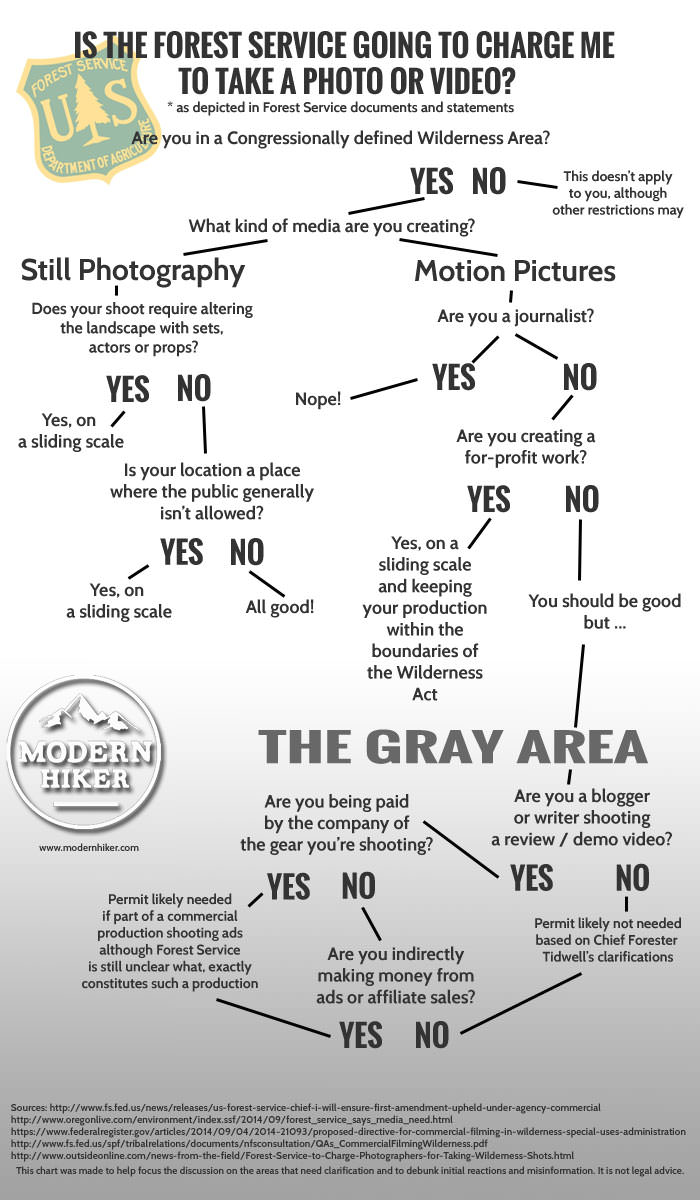 Reader Lissa Funk sent us a link to a PDF that simplifies the proposal for people and presents the information in a very clear and straightforward manner (albeit in Comic Sans font).

While the hysteria over average citizens being charged to take photos in wilderness areas seems to be subsiding, new concerns are arising for the proposals effects on journalists and its apparent clash with the First Amendment. The Seattle Times has excellent clarification on those issues as well as examples of inconsistent enforcement by the Forest Service.

A press release issued by Chief Forester Tom Tidwell has clarified the policy – and while there is still room for clarification our initial reaction to the news was correct.

Highlights from his statements:

The Forest Service still, I think, needs to define exactly what constitutes “models, actors, and props” for still photographers and whether or not bloggers who may generate income through a secondary, indirect sale (such as Google ads or affiliate sales) constitute a commercial production.