You know a museum exhibition is good when it leaves you energized to plan hiking trips all over the state, book desert campsites, refresh your knowledge about native cultures and fire ecology, and get your hands dirty in your garden all at the same time — and that’s exactly how I felt after leaving a media preview of the new California Continued exhibition at the Autry Museum of the American West.

At almost 20,000 square feet, California Continued is touted as the most significant renovation at the Autry since its founding in 1988. In the same way the Natural History Museum of Los Angeles County‘s recent Nature Lab and Nature Garden renovations did a phenomenal job of making natural history relevant to urban citizens by refocusing on the familiar and local as a bridge to further learning about the environment around Los Angeles, the Autry’s California Continued shines an enormous and long overdue spotlight on California’s indigenous people, connecting the challenges and issues facing modern California with the wisdom of those who lived here long before European settlers arrived to provide some potential — and hopeful — paths forward for California’s future.

The centerpiece of California Continued is Human Nature, a long-term section that focuses on the relationship between the landscape of California and the people who live in it — and how the two can affect each other both positively and negatively.

Entering Human Nature, the visitor is greeted with an extensive display of Native American artifacts — many seen for the first time since the Autry merged with the Southwest Museum of the American Indian in 2003 — laid out over a map of California based on their region of origin. A side table of common materials used in the artifacts encourages some tactile learning while a prominent wall map shows the sweeping native cultural diversity within the state. Interactive displays provide more information about the artifacts and allow closer examination of the objects behind glass. 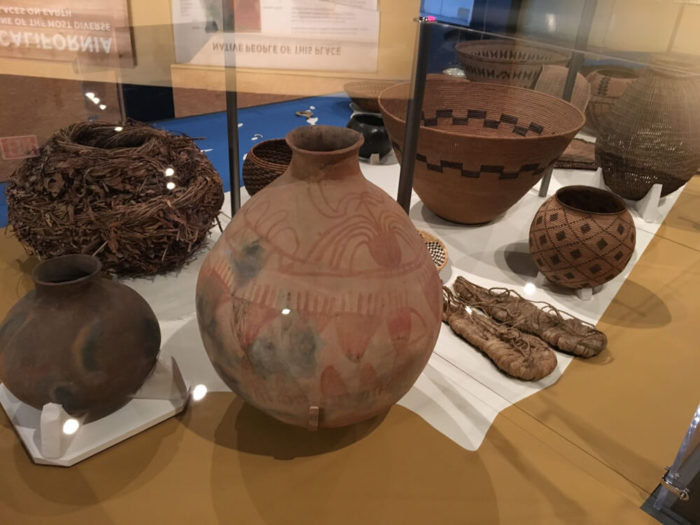 The remainder of this exhibition is divided into four sections: Salmon, Plants, Fire, and Desert. Each section blends information, multimedia presentations, and traditional and modern native Californian art to raise questions and offer some potential answers to those queries. 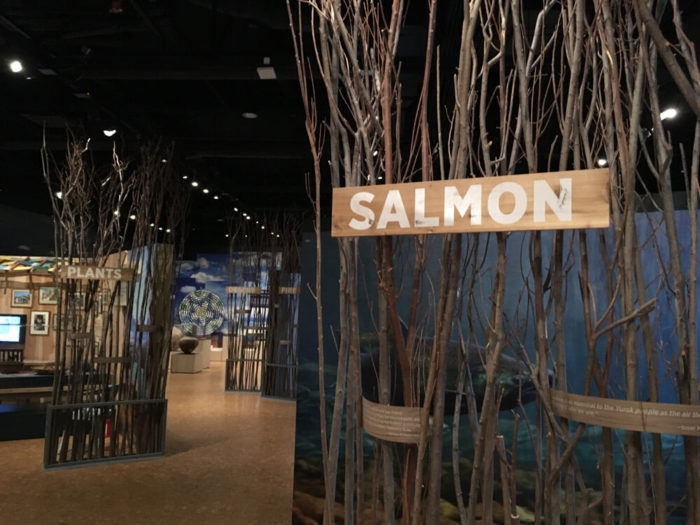 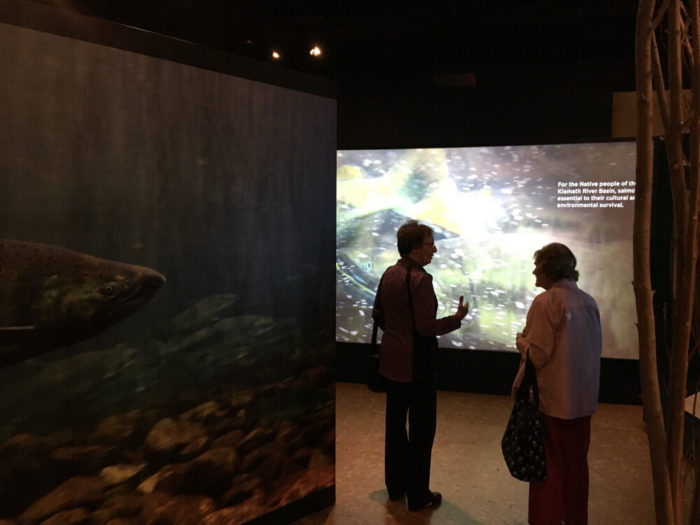 The Salmon section focuses on the fish not only as an important source of food for native Californians, but also as an important cultural symbol and a bellwether for the overall health of their surrounding landscape and the people, animals, and even trees that depend on them. Up to 70% of the nitrogen found in riparian forests near salmon spawning streams comes from the fish, and trees on the banks of salmon-stocked rivers and streams can grow more than three times as fast as their fish-free counterparts.

The section also highlights the problems caused by agricultural runoff and dam construction, and focuses on the dam removal in the Klamath River Basin as an example of a way to restore salmon runs in their historic homes and, in the process, increase the overall health of the region. 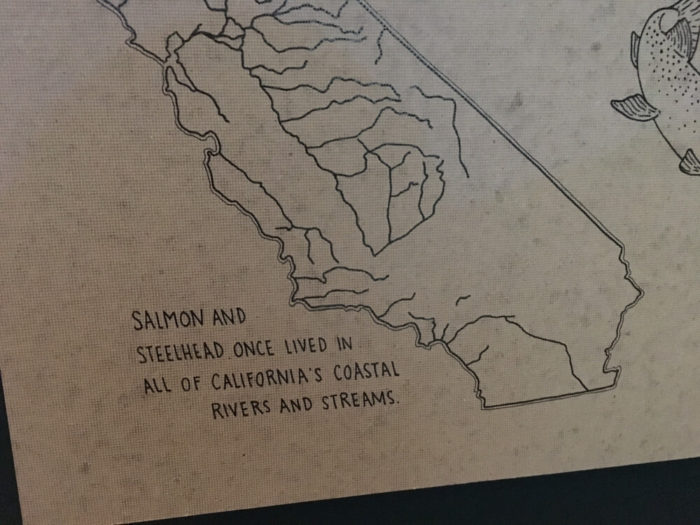 yes, even the Los Angeles River

The Fire section is one that will be of special interest to hikers. Often times, we view wildfires as destructive to the landscapes we love and a nuisance to our enjoyment of the outdoors when our favorite trails are closed. In this section, visitors learn that native Californians had been setting what we now know as “controlled burns” in the forests all across the state long before Western foresters began promoting the idea that thick, dense forests were healthier. 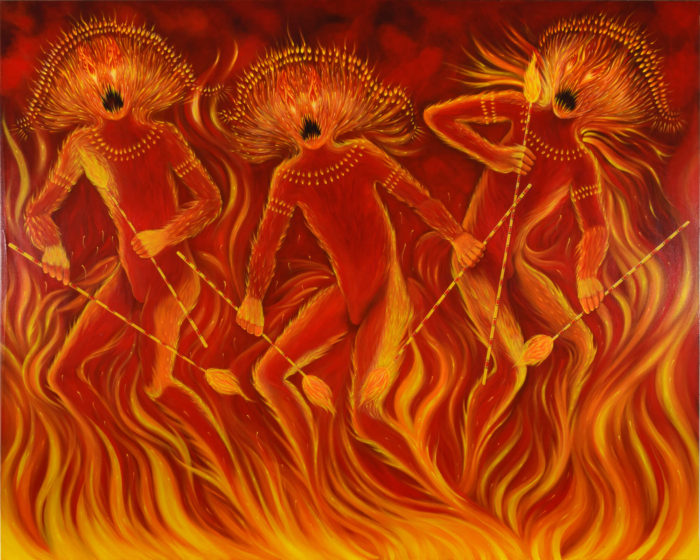 This area opens with an evocative painting of the Maidu nation’s fire spirits known as Dao-Lulelek, who searched out dry stretches of forest and danced to burn and cleanse the land. This story is juxtaposed with quotes from early conservationists like John Muir and Chief Forester Col. Henry Graves, who helped popularize the idea that all fire in forests is bad — a philosophy that was adopted by most land managers in the 1900s as foresters dismissed the historic native burns as “Piute Forestry.”

One of the most interesting parts of this section is a collection of romanticized Western paintings that are critiqued by Native fire experts: 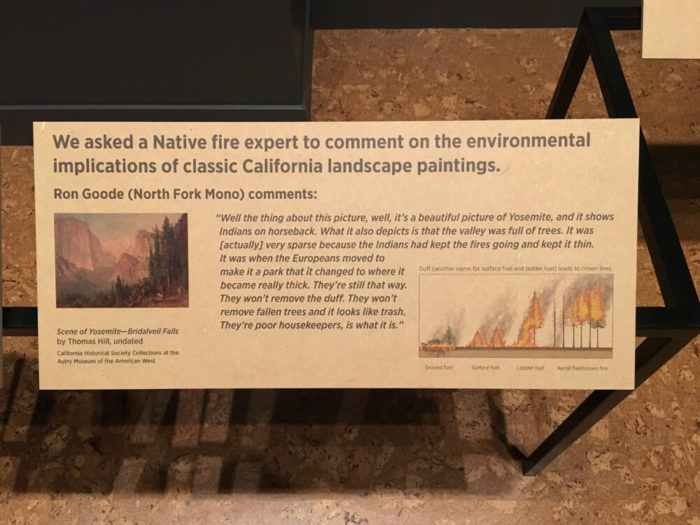 While the entire exhibit is really quite beautiful to wander through, the Desert section takes the prize here. A Hockney-esque photo collage of snapshots welcomes visitors into a beautiful display of desert culture and ecology, proving what sandy-booted hikers already know to be true: the desert is an amazing place that is absolutely full of incredible life. 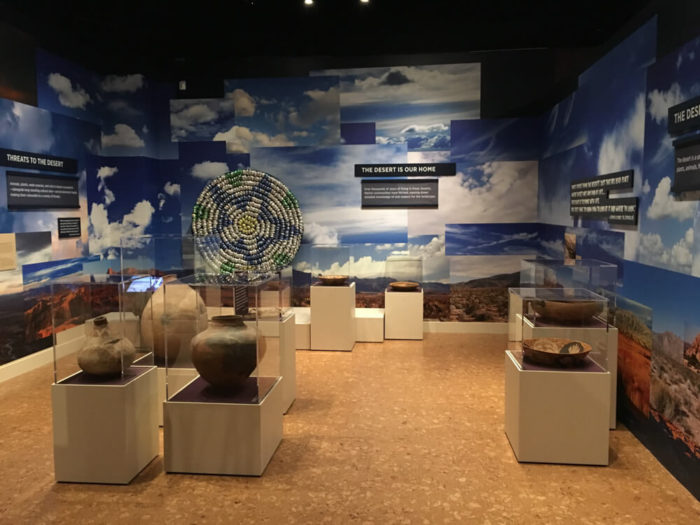 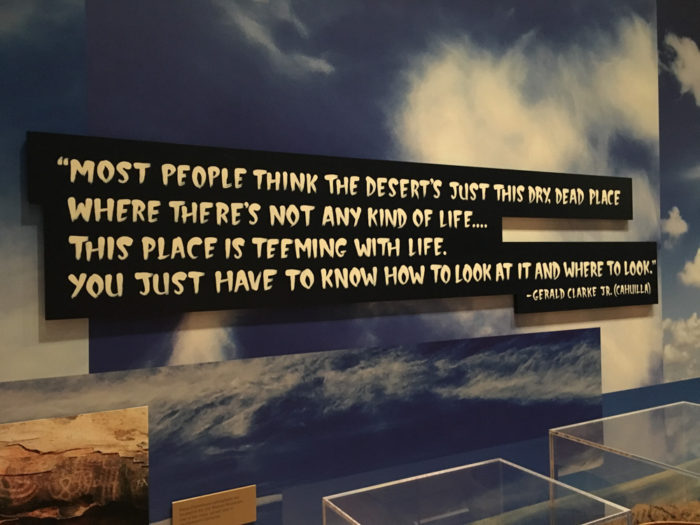 The desert section of the exhibit covers the ancient cultures that still live in this supposedly empty region today, as well as many of the threats this surprisingly fragile ecosystem faces — from industrial solar development to overuse and vandalism (issues we at Modern Hiker are especially familiar with). Be sure not to miss the basket woven with the Milky Way pattern and its moving story here.

California is home to more indigenous plants than any other state in the United States, and the Plants section highlights some of the species we have to offer — many of which will be very familiar to hikers.

An enormous wall is covered from floor to ceiling with images of native plants, while interactive exhibits introduce visitors to the Chia Café Collective — a group that uses indigenous plants for food and medicinal purposes. They offer up some sample recipes you can try out at home using ingredients from your own native garden or from local indigenous suppliers (Note: PLEASE don’t forage for these plants yourself unless you’re doing it on your own private land — plants in nearby National Forests, National Recreation Areas, and state and local parks are protected unless you have express permission to gather). 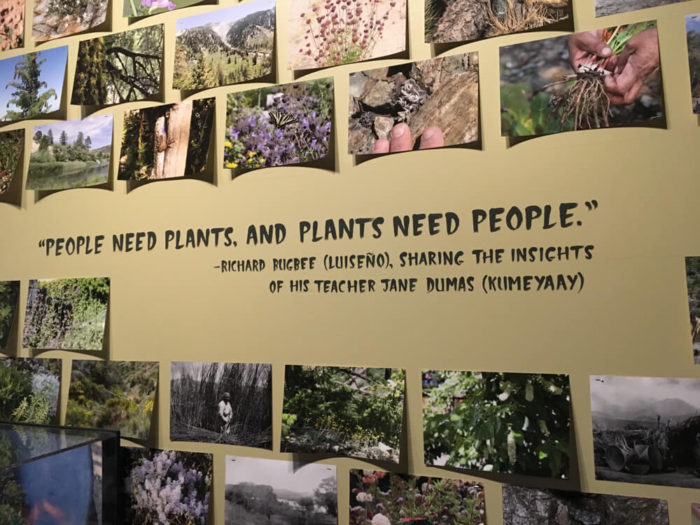 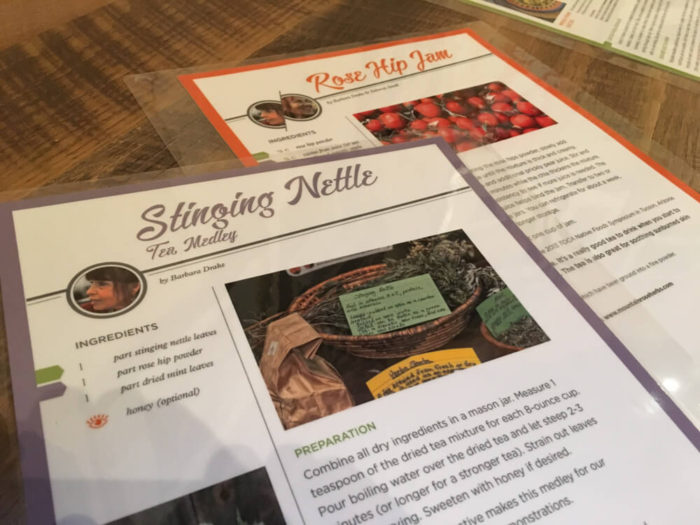 All four topics covered in the Human Nature exhibit will have companion documentary pieces produced by KCET called “Tending the Wild.” The series will be available on the series web page throughout the remainder of 2016 and will be capped off by an hour-long piece in 2017. Several video pieces from the series will be available for viewing on the exhibition floor itself. Visitors can also relax in a small lounge stocked with books and other local resources and organizations that work on the issues covered in the exhibit. 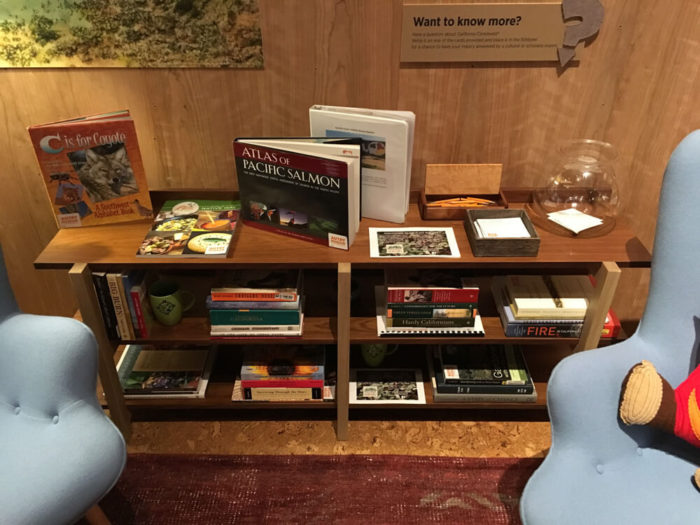 Outside the Human Nature exhibit, the California Road Trip displays six hours of unbelievable outdoor footage from all over California in simultaneous wide angle and close up. The outdoor patio area has been completely transformed into the Human Nature Garden, an ethnobotanical space stocked with native plants (many sourced from the Hahamonga Cooperative Nursery that not only creates an incredible and welcoming outdoor space, but also does a fantastic job of highlighting some of the medicinal uses for many of the plants that still grow wild in our backyards. If you’re looking for inspiration for a native garden of your own, this is a great place to find it. 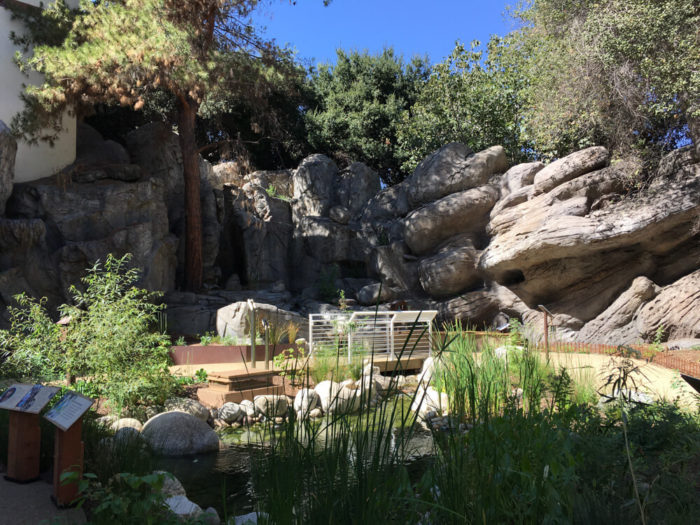 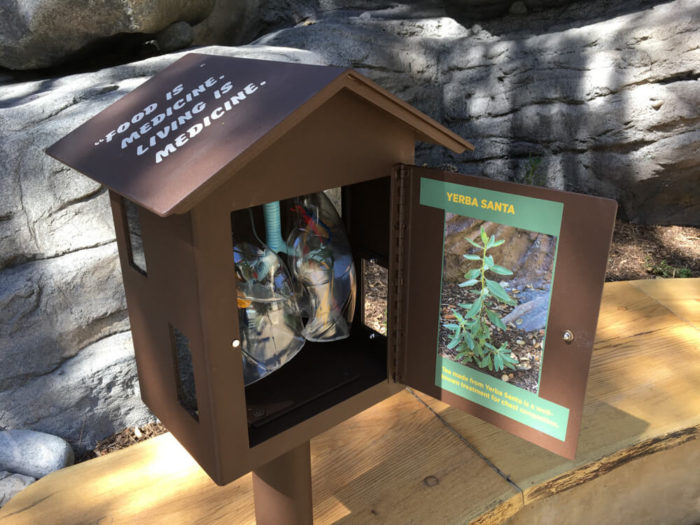 The California Continued exhibit also opens with the temporary The Life and Work of Mabel McKay – a fascinating showcase of a Pomo basketweaver and healer that is also the Autry’s first solo show dedicated to a Native American woman. Artifacts, artwork, and mementos from McKay’s daily life are on display here, painting a rich and detailed picture of an incredible figure — including a wide-ranging display of her baskets, some enormous and some no larger than the head of a pin (for real!) 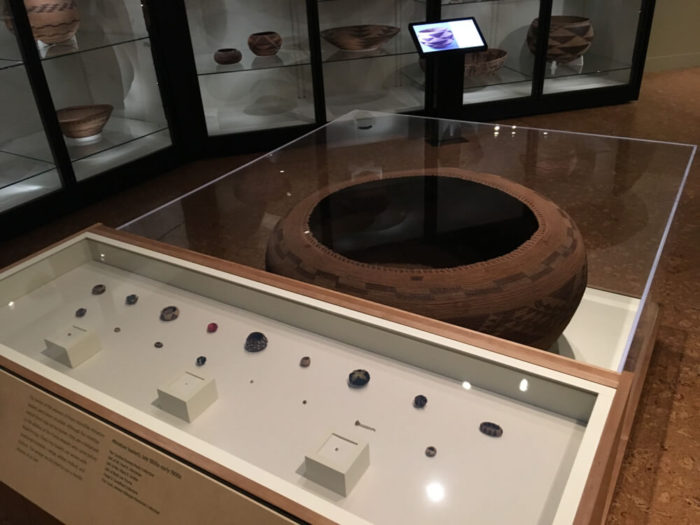 see those little dots? Those are BASKETS.