Bells and whistles are nice, but I’m mostly just concerned with a car’s ability to get me from point A to point B. And considering point B is often a trailhead at the end of a twisty mountain or desert road with no cell phone reception, that car had better be able to get me back to point A without any trouble. Since I also live in Hollywood without the benefit of a driveway, parking space, or residential permit it’s also nice if said car can squeeze into a decent parking space on the street.

I’ve had a used ’97 Honda Accord since I moved out to L.A. 11 years ago and – knock on wood – it’s treated me very, very kindly. It’s driven up the coast to Oregon and onto the Colorado Plateau to camp at the Grand Canyon’s South Rim and it’s still chugging away with more than 216,000 miles on the odometer with only basic maintenance on my part.

In addition to that dependability – even in the face of someone who still occasionally forgets which side of the car the gas tank is on – Honda’s been pretty good to me in the past. Last year they let me borrow a brand new Crosstour for a month and made an epic hiking and camping trip to the Colorado Plateau possible – so when I received an invitation to join their team in San Diego for an unveiling of the 2015 Fit, I jumped at the chance. 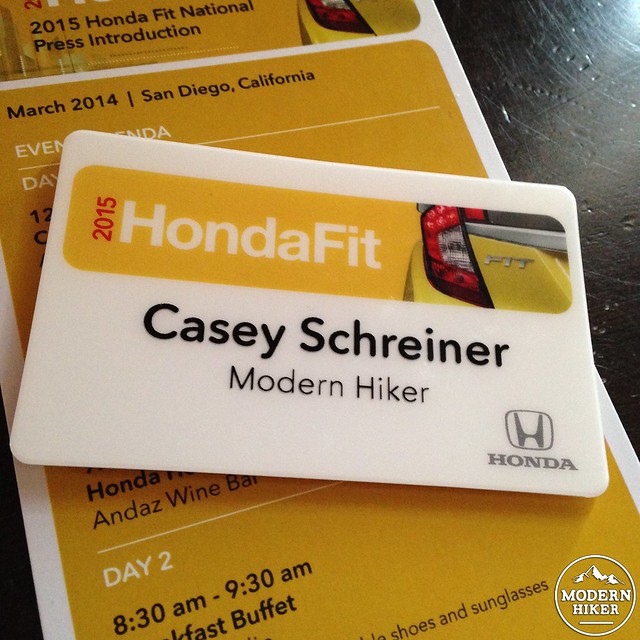 Room for your Gear

One of my regular hiking buddies has a Fit from a few years ago and she loves it – she’s been able to squeeze in several hikers and our gear on trips, and it’s been comfortable to drive in even from the back seat. So when we arrived in San Diego the very first thing I wanted to check out was the cargo space Honda engineers managed to cram into this relatively small car.

The new model of the Fit has up to 52.7 cubic feet of cargo volume depending on how you arrange its fold-flat second row “Magic Seat.” This seat has a 60-40 split so you can still get some extra cargo space if you’ve got some passengers in the car (roommate IKEA trip, anyone?). In addition, there are also several configurations or “modes” to accommodate your current storage needs. Utility Mode gets you the maximum 52.7 cubic feet with a completely flat floor. Tall Mode gives you more than 4 feet of vertical space in the back and will even let you manage to fit two upright mountain bikes (with their front tires removed). Long Mode lays both the rear and passenger seats flat and let you fit items up to 7 feet, 9 inches long in the cargo area. And – perhaps the nicest for long road trips and those nights when you just don’t feel like setting up another damned tent – Refresh Mode, which essentially lets two people lay completely flat in the front seats. 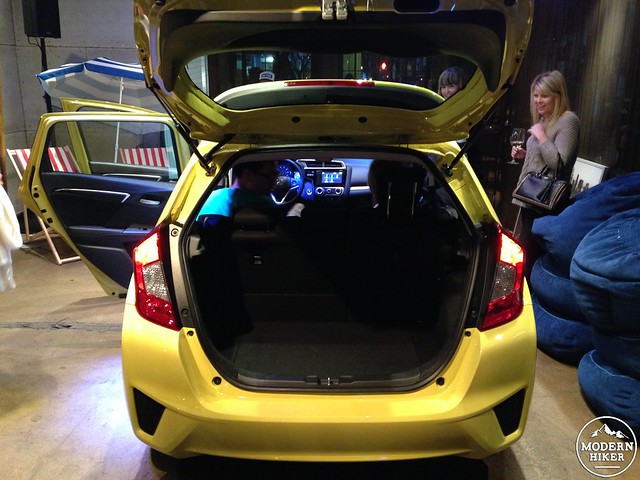 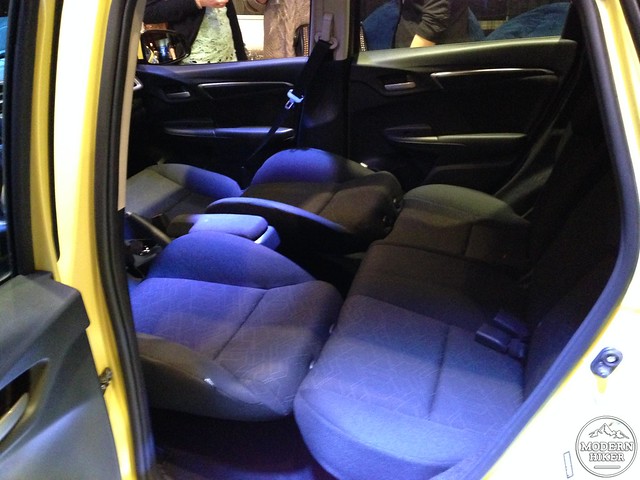 Just for kicks, I tried crawling into the cargo area to see if I could lay down for a night of post-hike z’s. With the front seats up I couldn’t lay completely flat like I could in the Crosstour, but I could fit comfortably in a slightly fetal position – and some of my less lanky fellow testers Katie from The Morning Fresh and Kam from Campfire Chic didn’t have as much trouble. 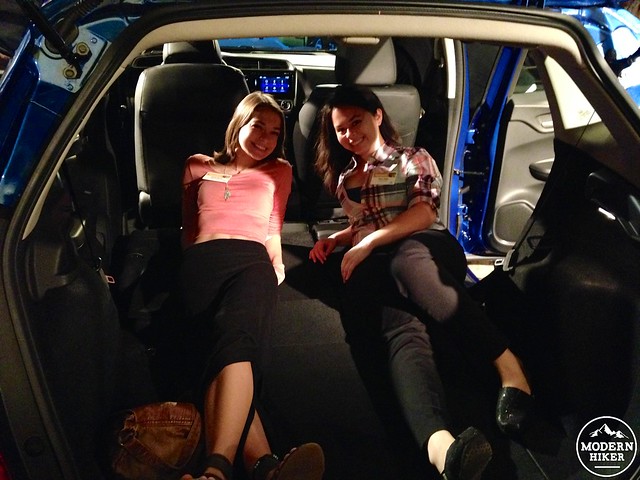 After we spent some time getting to know the cargo capabilities of the Fit, the next morning we were finally able to get behind the wheel to see what it felt like to actually drive the thing. Katie and I teamed up and spent the day driving around San Diego to see how the car handled. 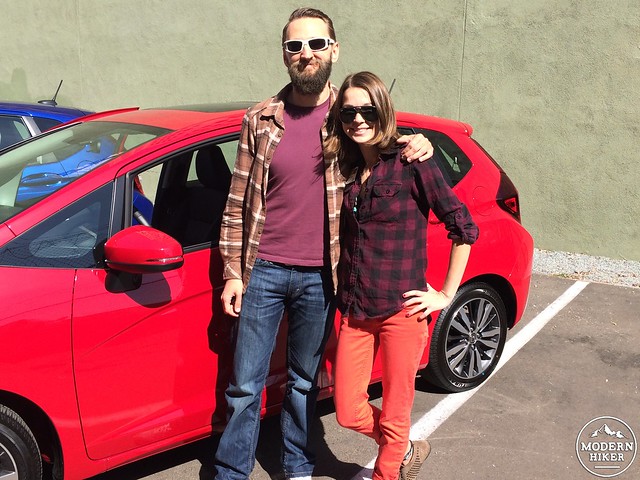 Some of the complaints I’ve heard about previous Fit models was that they felt a little too fragile – especially when accelerating or traveling at high speeds. I’m happy to say that the car had a nice little kick as we were getting onto the freeway onramp and didn’t seem to have any trouble going up the hills near La Jolla either. We managed to get a little sight-seeing in while tracking down some good photos – including this shot of the Fit packing in two longboards AND Katie. 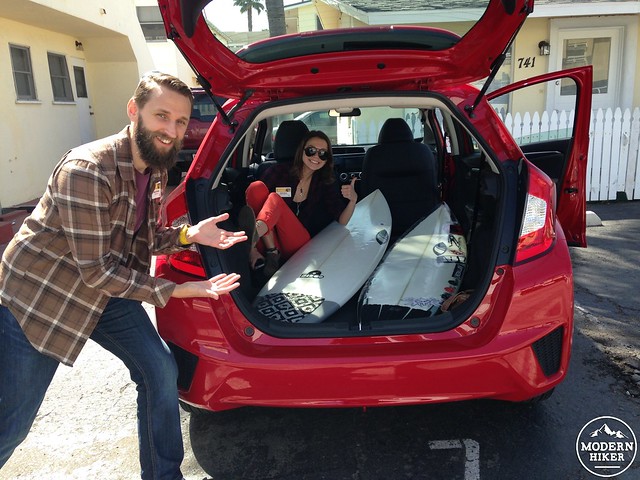 I will say I also found the car nice and quiet while driving on the freeway – and the LaneWatch side-camera helped keep me informed on what was going on around me (although I still default to the olde-timey method of manually checking blind spots before I change lanes anyway).

Katie and I are both on The Social Medias quite a bit, so it was also nice to find out the car’s center console had some USB ports and 12 volt power outlets to keep our smartphones alive, while the Bluetooth connection kept our tunes streaming nicely through the full-sounding six-speaker system.

But probably the thing I liked the most? Fuel efficiency. The automatic transmission LX model is rated at 33 mpg city, 41 mpg highway, and 36 mpg combined, which will definitely help you stretch your dollars on the way to distant trailheads. There’s also an in-dash feature called ECO Assist that will cause the console to glow green when you’re driving more efficiently … although I’m proud to say that even without that feature turned on I was able to clock an average of 42 miles per gallon on my test run – the highest of any tester and even higher than the EPA tests! 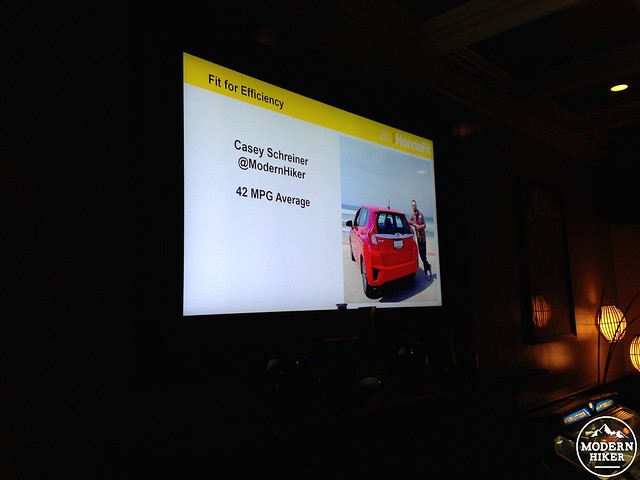 A few minor things I wasn’t too hot on: the Fit now has access to a new version of HondaLink, which is basically some apps you can download for both your compatible smartphone and the car’s in-dash touchscreen. While there’s some promise there – including the ability to plan trips on your phone and get basic updates from Twitter and Facebook – right now the apps seem a little overpriced and underpowered. The physical connection for the iPhone 5 seemed a bit inelegant, too – you need a Lightning digital AV adapter, a Lightning-to-USB cable, AND an HDMI cable to properly hook it up. Navigation itself was decent, although personally I think I’m always going to be disappointed by in-car navigation systems until Google licenses its Maps API to manufacturers.

Also, while the car feels high when you’re driving it (which is pretty awesome), it’s still built with a fairly standard passenger car clearance. While I’ve taken my Accord on some pretty gnarly washboard roads in the desert before, I would never classify that driving as being particularly fun – so while the Fit would probably be fine on dirt roads in decent condition, don’t expect to take it off-roading anytime soon.

And finally, because the Fit did some Tetris-style organization with its mechanics, there’s no room underneath the driver seat. Most of you probably don’t care about this, as that’s usually an area of your car where pens, credit cards, and maps vanish to never be seen again – but over the years I’ve developed a particular driving posture that places one of my feet a bit underneath that part of the seat. Don’t ask me how that happened and don’t ask me whether or not its an ergonomically sound position, just know that if you sit this way in your car you may have to do a little foot adjustment to get used to it.

I think this pretty much sums up my feelings about the Fit: I’m hoping my Accord lasts me for a few more years but I’ve already started thinking about what I’ll do whenever it does decide to finally kick the proverbial bucket. The two main vehicles I am considering are the Honda CR-V and the Fit. Honda let me borrow a brand new CR-V to drive down to San Diego for the event and while I enjoyed driving it, when I was driving back home when the test event was over, I was wishing I was cruising north on the 5 in the Fit instead of the CR-V.

Depending on your choice of trim, the Fit will cost you anywhere from $15,525 to $20,800. Each trim features a significantly increased number of standard features and the Fit was awarded a five-star Overall Vehicle Score from the National Highway Traffic Safety Administration. More information on the 2015 Fit can be found on the Honda web site.

Honda provided me with transportation, housing, and food on this trip but did not compensate Modern Hiker or influence the editorial tone of this review.