Our group of seven trekkers had just returned on a short flight from Pokhara after completing an incredible and beautiful trek to Annapurna Base Camp. We had de-planed and were walking toward the outdoor baggage claim at Kathmandu’s Tribhuvan International Airport when we all started meandering, as if walking home from a night of too many celebratory drinks.

It felt like a rug was being pulled out from underneath us — only instead of a carpet it was the ground and everything attached to it. In those few seconds of cognitive dissonance when our brains were trying to figure out what was happening, there was no panic. Only after we realized it was an earthquake did we hear people start to scream.

The shallow 7.8 quake on April 25th began at 11:56AM and lasted only 20 seconds, but the slow-motion nature of high-intensity experiences made it feel at least four times as long. I remember seeing people lay themselves flat on the ground to prevent getting knocked off their feet. I remember watching a brick retaining wall collapsing about a hundred feet away. I remember scanning the area for threats and moving our group away from a nearby concrete pole. Most of all, I remember waiting for what seemed like an eternity for the shaking to stop.

As the dust settled, no one really knew what to do next. Cell phone service was knocked out. The airport seemed intact, but no one could see what the rest of the city was like. We didn’t know if roads were passable or safe, or even if our lodging still existed. Our guides activated their satellite phone to let our emergency contacts know we were safe and after about an hour found out that our hotel in Thamel survived relatively unscathed.

We picked up a solo traveler and drove through the streets toward the place we planned on sleeping. When I first arrived in Kathmandu almost two weeks earlier, driving through the city was an energetic, almost overwhelming experience. Cars, vans, bikes, and people clogged the streets in every direction. Horns honked, people waved, things were happening. Now, the roads were full of people standing in silent shock, nervously looking up at the buildings around them.

While there was not as much destruction as I had initially expected to see on the way to Thamel, many buildings were visibly damaged or even leaning onto their neighbors. A few older brick structures had completely collapsed and many of the city’s walls had toppled over into the streets. We eventually reached a point in Thamel where our van could no longer navigate through the crowds, so we grabbed our bags and took off on foot toward our hotel, pausing for an aftershock along the way. 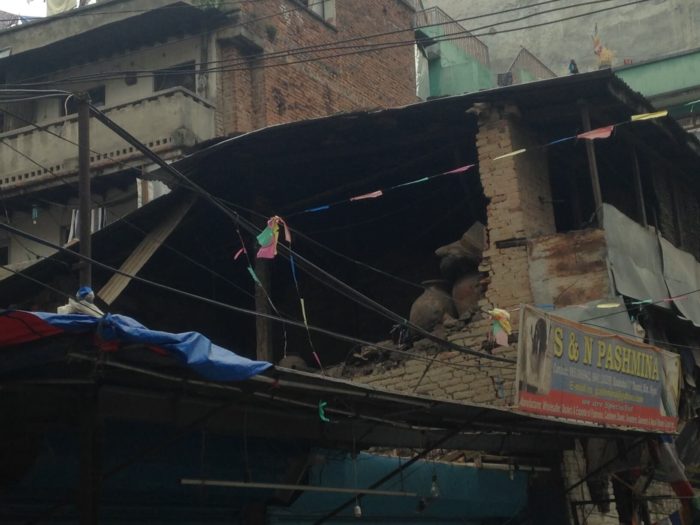 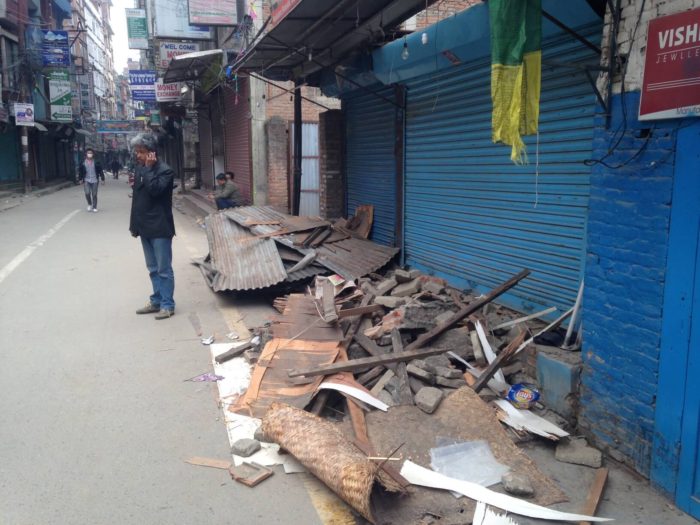 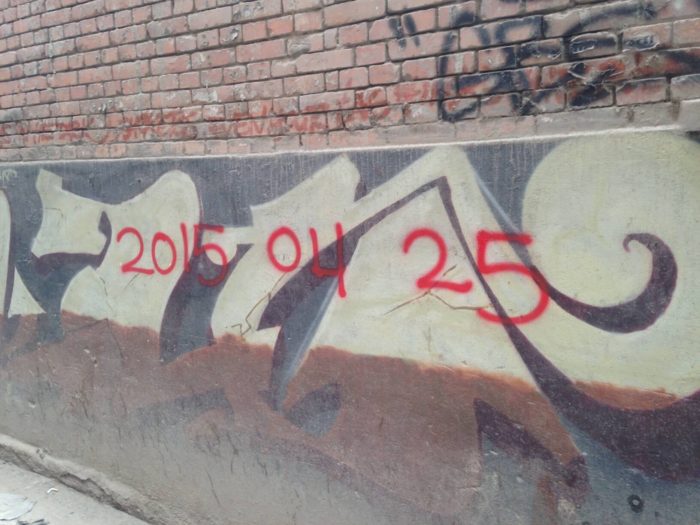 While we were assured the building was fine, our 5th-floor rooms were riddled by cracks in the wall, while windows lay broken just outside. Locals had gathered in a small green space next door to set up camp, unwilling to return to their homes for fear of more shaking.

That night, aftershocks seemed to hit almost every hour — some with the intensity of a standalone earthquake. I initially “slept” on my bed with my clothes, shoes, and headlamp on and a packed backpack by the door. After a few hours of dashing to the door frame when the building started moving again, I joined some people who had decided to spend some time in the hotel’s wide open courtyard instead of their cracked rooms.

One of the things that struck me so much about Nepal during my incredible visit was the overwhelming selflessness and generosity of its people — and this character endured even in the face of suffering. The only open storekeeper in Thamel said he wouldn’t allow people to buy too much at once so that everyone was able to get what they needed. The staff at our hotel passed tea around to guests and refugees alike. I heard of a guide who made sure his tour group got back to their hotel safely before he headed to check on his family, and a Nepali family who sent someone into town to get bottled water for an Australian who’d taken refuge with them just because they were concerned about her getting an upset stomach (the Australian told me they did this without even asking her). 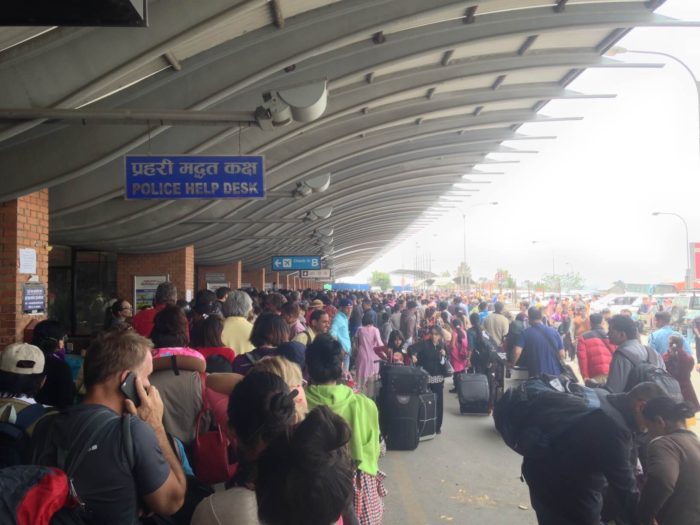 the scene outside KTM airport 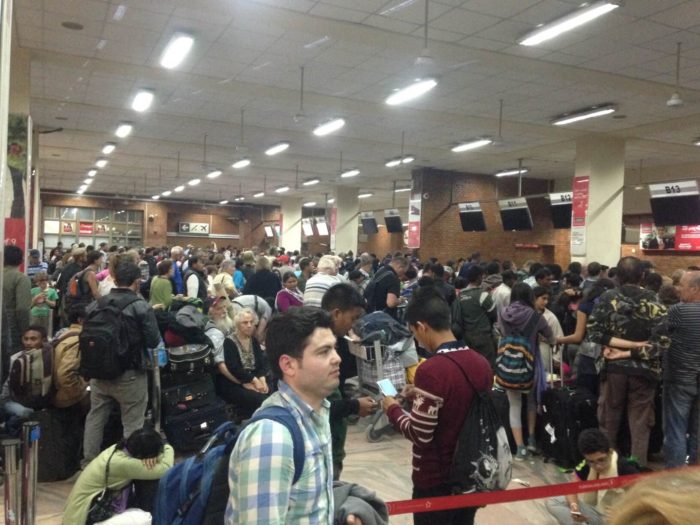 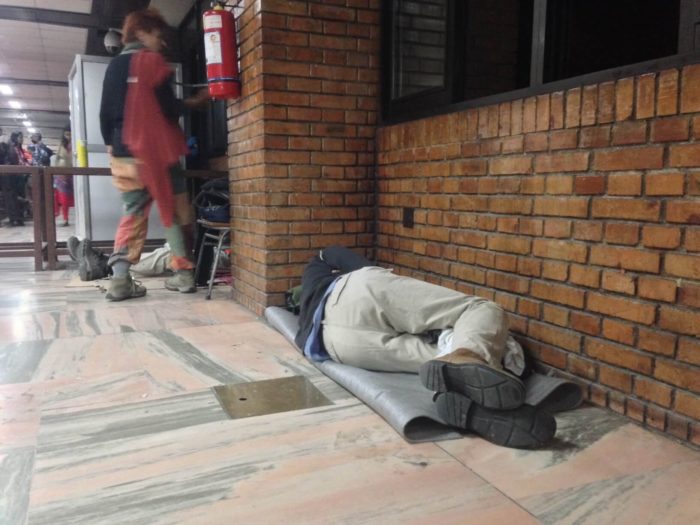 I slept here on night two in the airport

As I made my way through the thousands of people jamming into the single open door at the Kathmandu airport I knew that the situation would remain dire for those still in Nepal. Even as I spent 52 hours in the airport surviving on packages of almonds and Ritz crackers and sleeping on cardboard boxes near the airport security station, what I was going through paled in comparison to what lies ahead for the country.

All things considered, we were probably in one of the safest places in the entire city when the quake hit— a wide open parking lot with no tall buildings nearby and only a few lighting and electrical poles near the lot. A few hours earlier and I would have been on the top floor of a high rise hotel in Pokhara. A few hours later and I would have been in Kathmandu Durbar Square, an area that has basically ceased to exist.

Thousands of others were not so lucky. 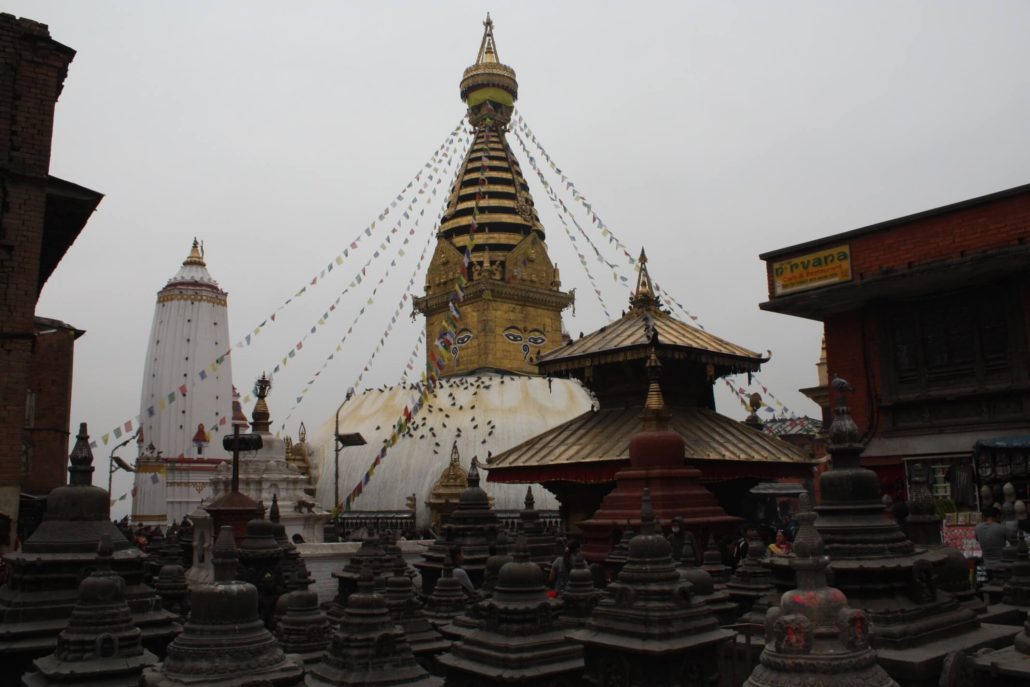 Swayambhunath temple before the earthquake 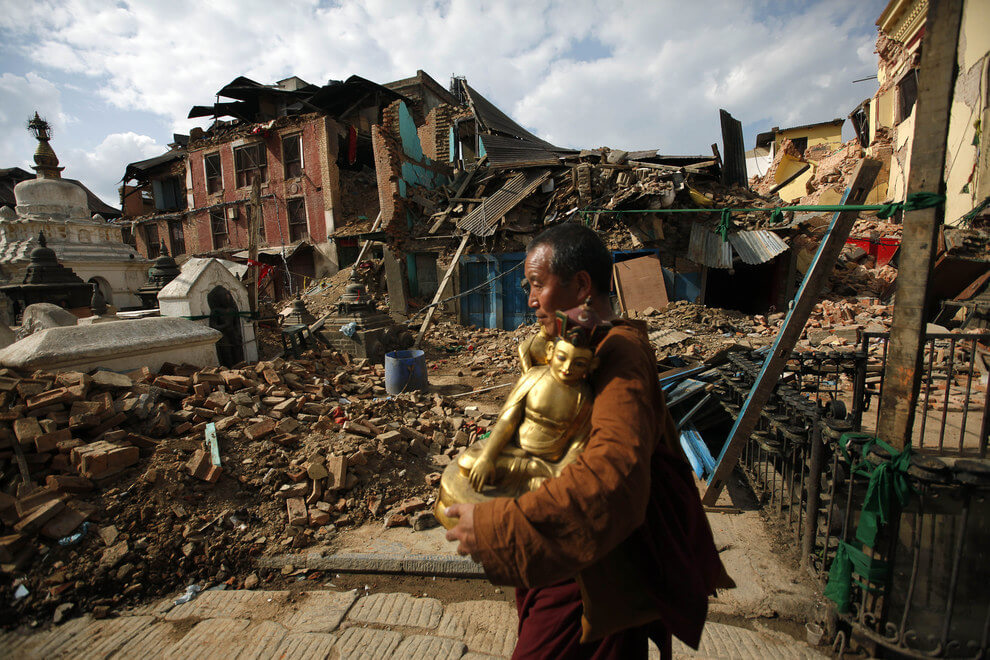 A nearly reverse-angle of the same scene after the quake. Niranjan Shrestha / AP

As of Friday, the death toll stands at 6,134 people with another 13,906 injured. That number will undoubtedly rise as the rescue workers continue digging through Kathmandu and reports pour in from the country’s more remote areas, many of which are no longer even accessible by dirt road due to the start of the monsoon season.

After remittances sent home from migrant workers (another sad story), tourism is the leading source of income for Nepal. It goes without saying that tourism is going to take a huge hit from this. Many of the villages along the routes to Annapurna and Everest rely almost exclusively on tourist dollars for income beyond sustenance farming.

There are ways we can help. In situations like this, immediate assistance is of the utmost importance. The group I toured with, Active Adventures, is a New Zealand based company with strong ties to the Himalaya region. They have recommended the following three charities:

The good news is that a little money in America goes a long way in Nepal, so anything you can spare will be tremendously appreciated by those who need it. I will personally be tightening my belt a bit and giving some cash to all three charities.