If you were wondering exactly which areas within the Station Fire burn area were burned and which were spared, you can thank NASA for giving us some information.

On November 19th, an unmanned Predator B drone flew over the Station Fire burn area and took detailed images with an Autonomous Modular Scanner. Unfortunately, the picture’s not very pretty.

The red line in this image shows the limit of the fire boundaries. Green is remaining vegetation, and anything that’s purple is burned ground. As you can see, there’s a heck of a lot of purple in there. 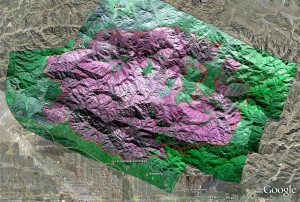 For the full-size image, and other images from the drone’s flight, check out the gallery on the NASA site.

I kind of want to drive up there once those roads open up, but a part of me really doesn’t want to go anywhere near the San Gabriels until at least a few plants have started growing this spring …