If you’ve been a longtime reader of Modern Hiker, you know that outdoor graffiti and vandalism is an issue that is near and dear to our hearts. We’ve written extensively on the topic and although the high-profile National Park cases tend to get the most attention, graffiti can also have a hugely negative impact on state and local parks as well.

Case in point: the area known as the Jim Morrison Cave, which has become a magnet for graffiti from people who mistakenly think that a). Jim Morrison visited this cave to get inspiration and b). Jim Morrison would have been cool with you vandalizing State Park property that supposedly inspired him. The result is this:

Needless to say, the story itself is apocryphal – there is zero evidence the former Doors frontman ever visited this cave, let alone frequented it for inspiration … and then there’s the whole vandalization of public property thing. The problem has become so bad that it was directly addressed on the California State Parks Instagram account just a few weeks ago:

Please Share: The defacing of the “Jim Morrison Cave” or any other California State Park property with graffiti or by carving into the rock is illegal and harms the natural resources that everyone enjoys. Additionally, removal efforts are time consuming, costly, and will prohibit access for everyone as areas need to be contained. Any removal efforts must avoid damage to the natural resource and the environment, which is not a simple task. Violators will be subject to citation or arrest with penalties for conviction including fines and/or jail and substantial restitution. While there is no historical evidence that Jim Morrison ever visited the cave popularly associated with him, we believe that he would not approve of defacing and damaging a natural resource that offers inspiration and joy to so many. Instead of leaving your mark physically, take the inspiration and energy you receive from your visit and use it to leave your mark through your daily life. For vandalism in progress, please call our dispatch at 1-951-443-2969 To report existing graffiti, please call the ranger station at 1-818-880-0367 Thank you

Compounding this problem is the fact that the graffiti lies within the Santa Monica Mountains National Recreation Area, which is itself dotted with countless natural and human resources that need special care during any sort of graffiti cleanup — often to the frustration of people who are trying to help expunge these eyesores from our trails. Last year, a reader emailed me with horrific graffiti photos along the Backbone Trail in the Santa Monica Mountains. He wanted to do something to help, so we looped him in with some of the land managers in the National Recreation Area. After spending weeks trying to figure out which land agency was in charge of the particular plot of land we were talking about (often a very complicated question in this National Recreation Area), we then learned that fossils and archeological resources nearby would require the presence of one of the NRA’s archeologists on site to deal with any clean up. This process took months and multiple email chains. Almost a year later, the graffiti still stands. 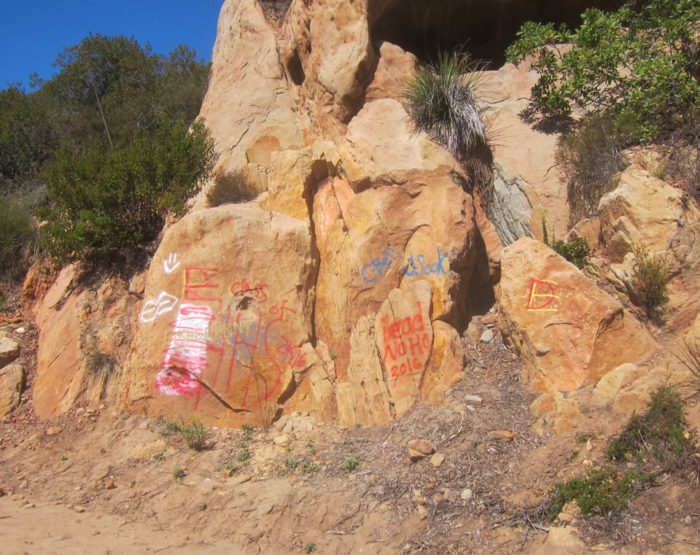 We at Modern Hiker are definitely of the mind that graffiti begets graffiti. Which is why even though sometimes it seems like a never-ending Sisyphean task to clean it up, it’s always a worthwhile endeavor. When someone sees one place that’s been visually littered with spray paint, they often don’t think much of adding their own special contributions to the mix.

We have also always said that a long-term solution to this problem is going to involve a combination of enforcement and education … and sometimes the groups that need education may surprise you … say, for instance, one of the world’s most well-known and prestigious research universities.

This week, a reader on the Stanford alumni list forwarded me their upcoming events for the Southern California area. Amidst the standard service days, field trips, and volunteer opportunities you’d expect to find on a university alumni event list, one in particular caught her eye — a trip and scavenger hunt to the Jim Morrison Cave in the Santa Monica Mountains.

You may note the phrase, “Bring a sharpie if you want to leave your mark.”

The event registration page went one step further, encouraging participants to also bring a can of spray paint. 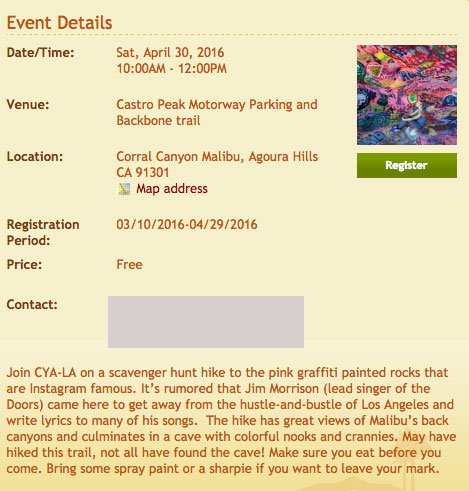 … In addition to some really great options (including a native plant restoration!), I was extremely dismayed to see a hike and scavenger hunt to the so-called Jim Morrison Cave that seemed to be encouraging additional vandalism of public lands. The hike description ends with the phrase “Bring a sharpie if you want to leave your mark.”

The “Jim Morrison Cave” sits on California State Park property. Not only is it illegal to deface California State Park Property with graffiti or carving of any kind, but altering the landscape damages the natural resources in the area, adversely affects other users’ enjoyment of the park, and requires expensive and time-consuming efforts to remove those defacements — which often come out of the Parks already extremely limited budgets. Further damage threatens complete closure of this area, even for those of us who volunteer our time cleaning up such defacements.

Despite there being absolutely zero historical evidence Jim Morrison ever visited this cave, I encourage you to visit this place and instead of “leaving your own mark,” use this opportunity to see first-hand how a series of seemingly minor human actions can profoundly alter and destroy a landscape’s natural characteristic. Or even better, consider offering your services to the California State Parks to help clean up this graffiti.

We are very happy to report that both organizers quickly responded via email. They have altered the description of the event on their registration page and sent out an email to everyone who had already registered, informing them they would no longer be adding their own marks to the cave.

Thank you for registering to attend the hike this Sunday, May 1st at 10 am. It has been brought to our attention that this area is part of the California State Parks and it is considered vandalism to “leave your mark” on the cave. We do not want to harm the natural beauty of the area or cause damage to natural resources. Please leave all sharpies at home but feel free to bring an adventurous spirit.

The organizers are also informing participants of ways they can help our park land in the future, including organized outings to remove graffiti.

It is difficult to remember – especially in urban wilderness areas like the ones that surround Los Angeles – that human activity can have an incredibly adverse on those landscapes. Even though sometimes our trails are dirty or have graffiti, that shouldn’t be seen as a license to add to those problems. Instead, it should be inspiration to help solve them.

We’re very happy to help the Stanford Alumni association reframe the purpose of their outing and are pleased to see that they’re encouraging their members to engage in further environmental causes.

And it just goes to show – you never know who doesn’t know to enjoy the outdoors responsibly. So set a good example, talk to people about these issues if you feel comfortable, and if you don’t – make sure you report the illegal activity or vandalism to park officials when you get back to the trailhead.

California State Parks has announced they will be indefinitely closing access to the cave due to this vandalism.