After reading 45 entries in the yourLUME Sierra Designs Tent contest, I have realized a few things – 1). you guys are all awesome 2). it was really hard to pick a winner!

Stories ran the gamut from cautionary tales about ill-equipped snow-camping to first-time backpacking trials, frightening animal encounters, teaching children about the outdoors, discovering SoCal’s backyard, and meeting amazing trail-folks. There were even a few stories about people who completely changed their life-paths after discovering hiking!

Picking a winner was exceptionally tough – but in the end I had to give the prize to Riah Buchanan of Venice, CA for her SoCal-bound tale. As you can see, she wasted no time in getting to learn the lay of the land:

When I moved to LA last summer I had a two week period between leases. I had some meetings I had to go to for my new job in LA, so I decided to camp nearby. I didn’t really think about how crowded all of the campsites would be (and how weird I would look at the meetings). I ended up driving up the coast all the way to Jalama Beach after stopping at all the campgrounds in between. I was setting up my tent in the twilight during a windstorm, when two different people brought me their tent stakes – of course I had lost mine. The next morning the family next door offered me tacos, I must have looked pretty bedraggled. Some kids brought me a tiny flower bouquet and asked where my parents were.

After Jalama, I made my way back down to the Musch camp at Trippet Ranch, which was eerily deserted. In the middle of the night I woke up to what sounded like a large animal outside my tent. I could see its shadow, it looked like a monster. I called my mom for some last words. My phone died as I was talking to her. Three hours later a ranger made a verbal knocking noise outside my tent. He said he was glad to see me – I guess they had found an empty tent nearby which they thought was mine, which had some rips in it. So my mom was relieved to hear I had not been dragged away in the night.

The next day I was hiking at Pt Mugu, I was just about to the bottom. A snake had stretched itself across the trail and wouldn’t move. Naturally I yelled “move, snake!” since I couldn’t get around him. A biker in a Harley jacket heard me from the parking lot and hiked up. He reached down calmly and threw the snake in the bushes. He told me not to try that.

The interactions I had while traveling alone hiking and camping those two weeks made me feel pretty good about humanity. Every time I had a problem due to my inexperience/lack of preparedness, someone came to my rescue, and happily. After a year of hiking here in LA, I just received my Wilderness First Responder certification and hope to be able to be there for another hiker/camper. 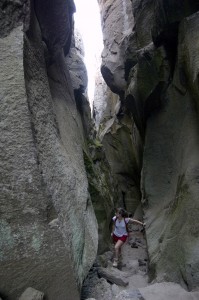 the winner at the Crack In The Ground Trail, Oregon.

Riah is headed to Alaska this summer, and I hope she puts her new tent through some serious paces. Thanks to everyone who entered … and worry not if you didn’t win – I’ll try to track down some more suppliers this summer for additional contests and giveaways since you guys like free stuff so much!