Well, it’s getting close to the end of summer, which means it’s time for that annual celestial show – the Perseid Meteor Showers.

This year, Sky and Telescope magazine is predicting an even more spectacular show for North America, as the meteor showers also happen to coincide with a new moon – an event that happens every three years or so.

It goes without saying that in order to see the most meteors, you’re going to want to be in a dark, rural area. Your cool rooftop balcony in Pasadena ain’t gonna cut it – but I’ve had luck just driving north to the Antelope Valley. You’ll still get a bit of light pollution (it’s tough to avoid in L.A., unless you can head further into the desert), but you should be able to spot a pretty good amount of shooting stars as the light pollution on the north side of the San Gabriels is much smaller than on the south side.

Prime viewing for the Perseids is from about 11PM on Thursday night through the first light of dawn, with up to 100 meteors or more per hour during the peak.

Sky and Telescope has some in-depth tips for viewing, but you can probably just snag a comfy site, curl up with a hot drink, sleeping bag or blankets, and mosquito repellent, and just patiently gaze toward the northeast.

So – any stargazing parties tonight? 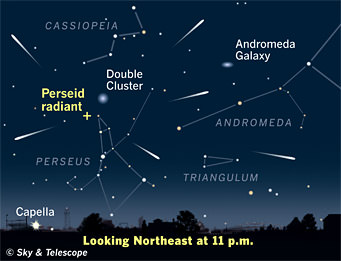