Secretary Zinke Introduces Himself to the Department

The email has the subject line “I believe you and I are here for the same reason,” and Zinke aims to put his best foot forward in the department he is about to take over, which manages the National Park System as well as the Fish and Wildlife Service, Bureau of Land Management, Bureau of Indian Affairs, and others (the Forest Service is headed by the Department of Agriculture). 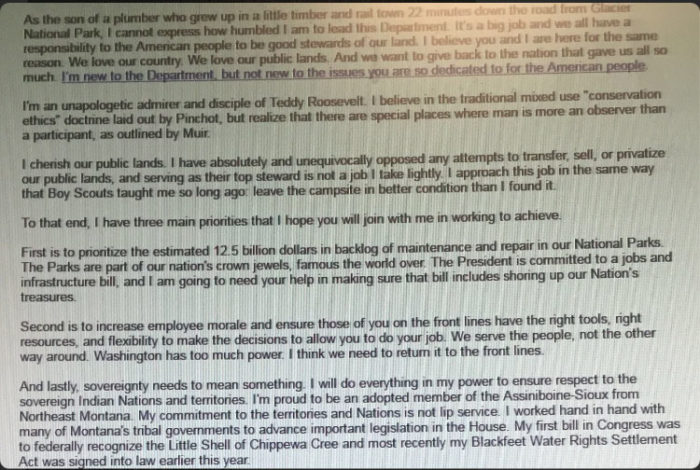 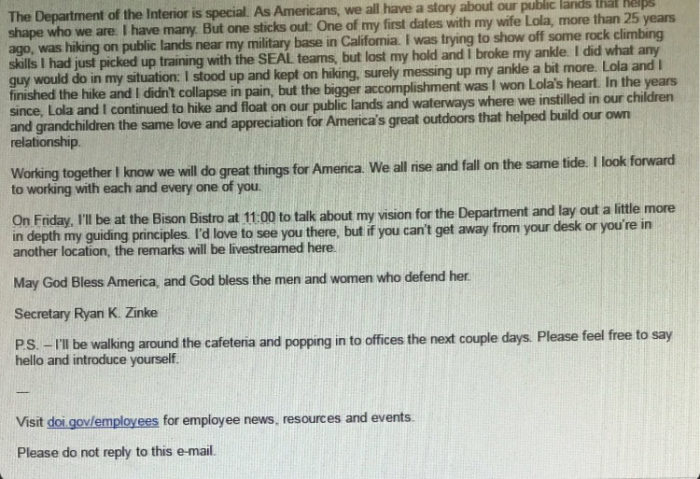 Screenshots of the introductory email

We have transcribed the email in its entirety below:

As the son of a plumber who grew up in a little timber and rail town 22 minutes down the road from Glacier National Park, I cannot express how humbled I am to lead this Department. It’s a big job and we all have a responsibility to the American people to be good stewards of our land. I believe you and I are here for the same reason. We love our country. We love our public lands. And we want to give back to the nation that gave us all so much. I’m new to the Department, but not new to the issues you are so dedicated to for the American people.

I’m an unapologetic admirer and disciple of Teddy Roosevelt. I believe in the tradition mixed use “conservation ethics” doctrine laid out by Pinchot, but realize that there are special places where man is more an observer than a participant, as outlined by Muir.

I cherish our public lands. I have absolutely and unequivocally opposed any attempts to transfer, sell, or privatize our public lands, and serving as their top steward is not a job I take lightly. I approach this job in the same way that Boy Scouts taught me so long ago: leave the campsite in better condition than I found it.

To that end, I have three main priorities that I hope you will join me in working to achieve.

First is to prioritize the estimated 12.5 billion dollars in backlog of maintenance and repair in our National Parks. The Parks are part of our nation’s crown jewels, famous the world over. The President is committed to a jobs and infrastructure bill, and I am going to need your help in making sure that bill includes shoring up our Nation’s treasures.

Second is to increase employee morale and ensure those of you on the front lines have the right tools, right resources, and flexibility to make the decisions to allow you to do your job. We serve the people, not the other way around. Washington has too much power. I think we need to return it to the front lines.

And lastly, sovereignty needs to mean something. I will do everything in my power to ensure respect to the sovereign Indian Nations and territories. I’m proud to be an adopted member of the Assiniboine-Sioux from Northeast Montana. My commitment to the territories and Nations is not lip service. I worked hand in hand with many of Montana’s tribal governments to advance important legislation in the House. My first bill in Congress was to federally recognize the Little Shell of Chippewa Cree and most recently my Blackfeet Water Rights Settlement Act was signed into law earlier this year.

The Department of the Interior is special. As Americans, we all have a story about our public lands that helps shape who we are. I have many. But one sticks out: One of my first dates with my wife Lola, more than 25 years ago, was hiking on public lands near my military base in California. I was trying to show off some rock climbing skills I had just picked up training with the SEAL teams, but lost my hold and I broke my ankle. I did what any guy would do in my situation: I stood up and kept on hiking, surely messing up my ankle a bit more. Lola and I finished the hike and I didn’t collapse in pain, but the bigger accomplishment was I won Lola’s heart. In the years since, Lola and I continued to hike and float in our public lands and waterways where we instilled in our children and grandchildren the same love and appreciation for America’s great outdoors that helped build our own relationship.

Working together I know we will do great things for America. We all rise and fall on the same tide. I look forward to working with each and every one of you.

On Friday, I’ll be at the Bison Bistro at 11:00 to talk about my vision for the Department and lay out a little more in depth my guiding principles. I’d love to see you there, but if you can’t get away from your desk or you’re in another location,  the remarks will be livestreamed here.

My God Bless America, and God bless the men and women who defend her.

P.S. — I’ll be walking around the cafeteria and popping in to offices the next couple days. Please feel free to say hello and introduce yourself.

While the tone of Zinke’s message seems to be at the very least non-confrontational toward the Department he is about to manage, outlets like High Country News have noted the spotty record Zinke had during his two terms as a Representative from Montana. Zinke has a lifetime 4% score from the League of Conservation Voters and close ties to the oil and gas industries but has resisted efforts to sell or transfer federal land to the states and supported the Land and Water Conservation Fund.

It is also worth noting that Zinke’s oft-cited role model Teddy Roosevelt used the Antiquities Act of 1906 to establish 18 National Monuments in 3 years, and that many of his Republican colleagues have introduced bills to greatly restrict or overturn that law.

As of the evening of March 2nd, the Department of the Interior’s website still acknowledges climate change. His two first Secretarial Orders were to increase access to public lands for recreation (Order 3347) and reverse a ban on lead ammunition and fish tackle used on Fish and Wildlife Service lands (Order 3346). 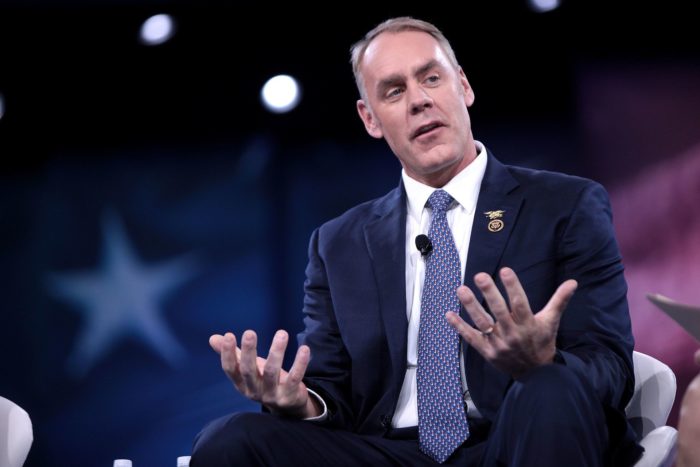