If anyone checked the weather forecast and saw “Scattered Smoke” included with the temperature, you know Fire Season is officially on.

I flew back in to LAX yesterday afternoon, and was pretty disheartened to see how thickly the smoke from the La Brea fire had spread over the L.A. basin. Even after landing, visibility was shot – I couldn’t even make out the Santa Monica Mountains from the landing strip. 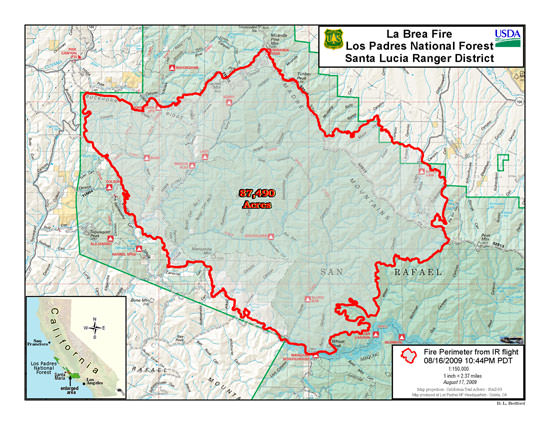 As of this morning, officials were reporting the La Brea Fire in the Los Padres National Forest was 75% contained, but that it still had high growth potential due to forecast weather conditions over the next 24 hours. The fire has already burned over 87,000 acres, and was reportedly started at an illegal marijuana farm inside the wilderness.

Keep track of the La Brea fire at Inciweb, thank a firefighter if you see one, and hope that the smoke clears before your next hike!