You probably expect National Park Rangers to put in a lot of miles of distance traveled in the course of their jobs, but L.A.’s newest park ranger may put the rest of the area staff to shame — say hello to LA Ranger Troca (pronounced “la troca”), a food truck turned into a mobile visitor center for the Santa Monica Mountains.

The newest member of the Santa Monica Mountains National Recreation Area, LA Troca made its debut at the 2016 Tournament of Roses, where it helped swear in 14,000 new Junior Rangers. Modern Hiker met up with LA Troca at its temporary home at El Pueblo De Los Ángeles Historical Monument (along with Supervisory Park Ranger of the Los Angeles District of the Santa Monica Mountains National Recreation Area Vanessa Torres) to learn more about how this project came to be and what lies ahead for its future. 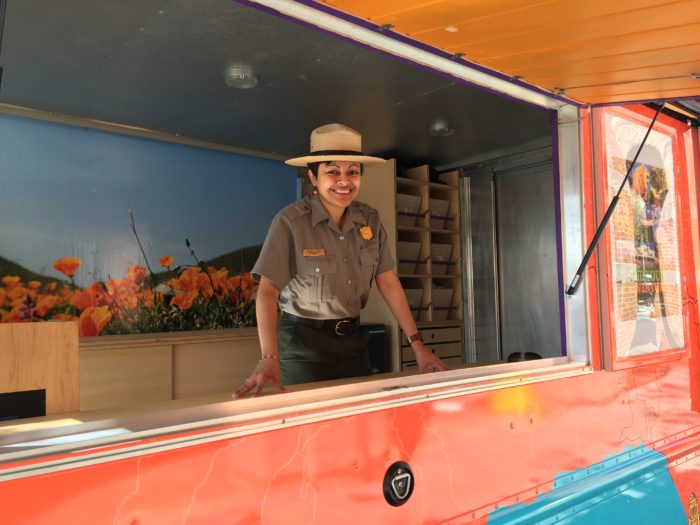 LA Troca takes its inspiration from a similar program pioneered by the Golden Gate National Recreation Area called the Roving Ranger, and L.A.’s version was built by the same company that created San Francisco’s four-wheeled nature center. Torres said LA Troca took about a year and a half to take from concept to reality — a remarkably quick turnaround for a project like this. The project was supported by the Santa Monica Mountains Fund as well as the Ahmanson Foundation.

Why a Food Truck?

NPR just ran a widely-shared story about the difficulties the National Park System is having in attracting new, younger, more diverse audiences.  LA Troca, said Torres, is designed to reach out to those people — traditionally underserved communities who may not be able to get to the Santa Monica Mountains or who may not even know they exist.

Another way to show LA Troca — and the Santa Monica Mountains — are for everyone? The back of the vehicle asks visitors where they find nature in L.A. in the city’s ten most frequently used languages.

As for actual tacos, Torres said one of the programs they’re brainstorming now is something called “Nature Tacos,” which will teach visitors about some of the geologic aspects of the mountain range — but they probably won’t be actually edible. 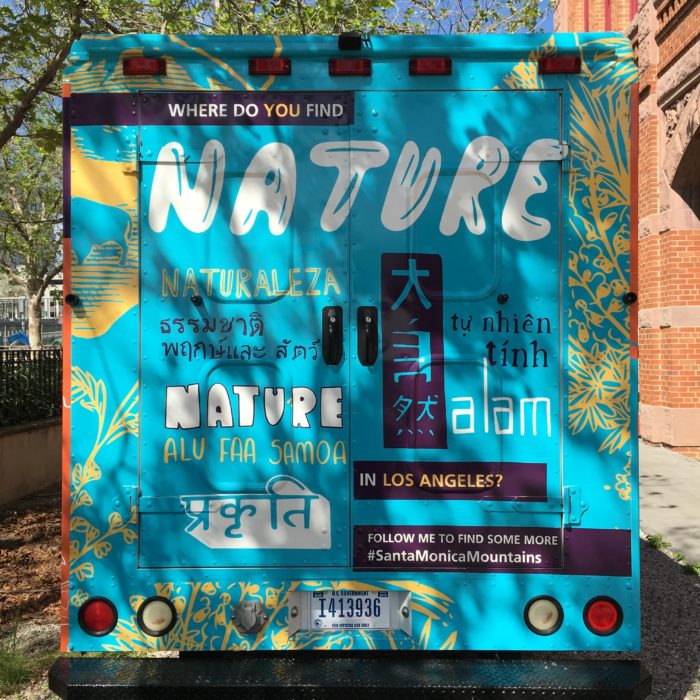 LA Troca‘s distinctive design began with a series of brainstorming sessions with local schoolchildren, who came up with the idea of having different sides of the vehicle highlight L.A.’s man-made and natural landscapes. One side features a stylized street grid and some of the city’s most iconic buildings, including the Hollywood Sign, Griffith Observatory, City Hall, and downtown skyscrapers. The NRA’s meandering border zig-zags from the Mugu Lagoon to Griffith Park and the Santa Monica beaches. A wooden half-surfboard floats in the Pacific and can be latched upright for use as a table. 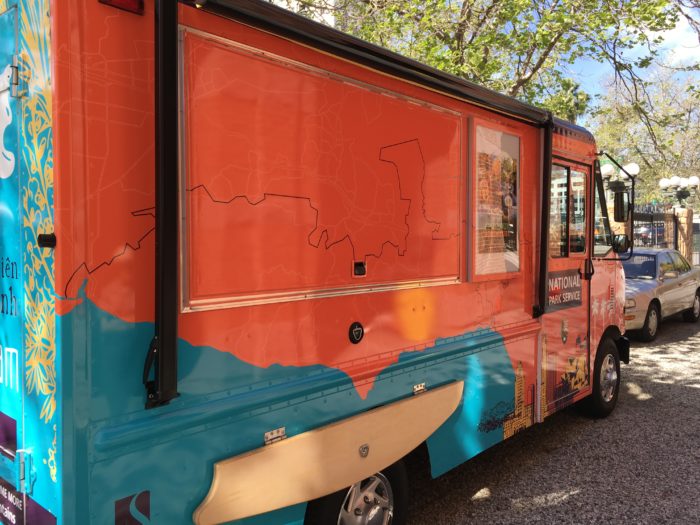 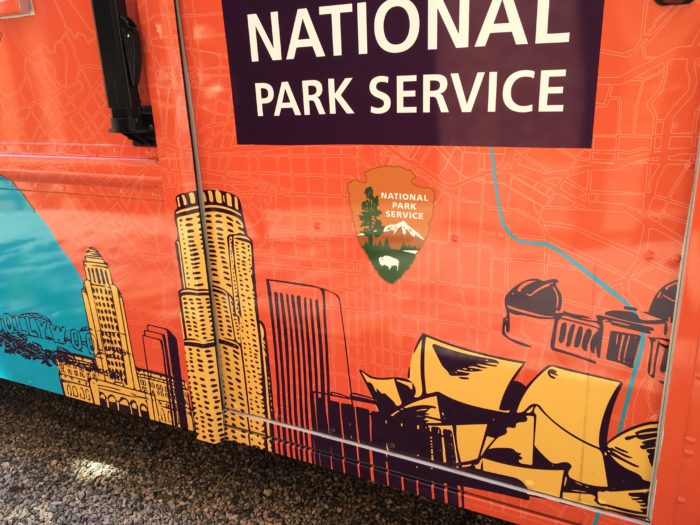 On the other side, expressive hand-drawn depictions of native flora and fauna overlay a stylized topographical map. The visuals were designed by Ranger Michael Liang, also of the Santa Monica Mountains NRA. 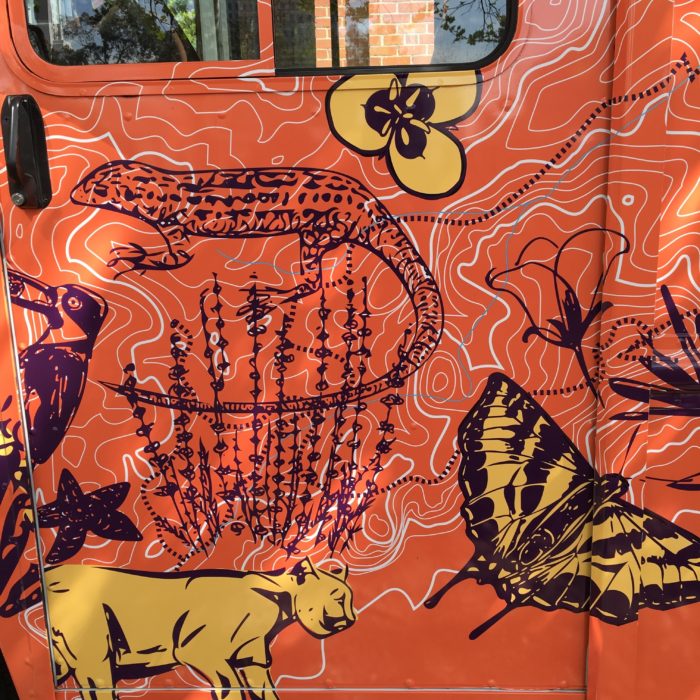 What Can People Learn at LA Troca?

“This is not a place where we’re giving the traditional visitor center experiences,” Torres said, “but all the programs here fall into three themes — Recreation, L.A. Culture and History, and Citizen Science.”

Recreational programs go beyond the traditional ranger-led hikes. Because LA Troca is visiting people in different neighborhoods, it’s an opportunity for the rangers to get out and active with visitors in unique ways. Sometimes they’ll get a game of basketball or football going, or they’ll get a little obstacle course set up or do a three-legged race. It’s not only about encouraging people to get active and outside no matter where they are (even if they happen to reside in one of the many park-poor neighborhoods of Los Angeles), but also to let these new visitors get to know the rangers in a fun and personal way.

Citizen Science programs are tactile and hands-on, and also keep the visitors active. Visitors may get butterfly nets or binoculars to go out and observe the world around them or get their first chance to look at nature up-close with a microscope.

The L.A. Culture and History programs are really unique, and speak to the incredibly diverse population in the Los Angeles area. “We don’t want to go into a place and tell them their story,” said Torres. “Instead, we want to hear their stories.”

Taking some inspiration from the popular photo-project Humans of New York, La Troca will be gathering stories from the people who visit it, finding out how they experience Los Angeles, its wilderness, parks, and urban wildlife. The rangers are still in the early stages of this program, but they’ll be sharing stories and photos on their social media channels.

What’s Next for La Troca

LA Troca is filling out its programming for the remainder of 2016 and will be making lots of appearances at parks, schools, and libraries. The staff is working hard to make sure they’re always updating their programming and to keep it fresh. “We want to walk the walk on diversity and really reach people where they are,” said Torres.

The Santa Monica Mountains NRA has long run one of the best and most responsive social media programs in the National Park Service, and you should follow them on Facebook, Instagram, and Twitter to see where LA Troca is headed next.

If you would like to get in touch with the rangers to schedule LA Troca at your event, email them at [email protected].