This week, the San Gabriel Mountains National Monument celebrated its one year anniversary, highlighting some of the extensive progress the mountains have made since President Obama designated the Monument in 2014.

In the lead up to the Monument designation – when Congresswoman Judy Chu was spearheading an effort to establish a larger Monument via legislation – many were worried about the Forest Service’s ability to fund new improvements, let alone work on the extensive backlog of maintenance and repair. One year later, through a series of public-private partnerships, corporate sponsorships, donations, and volunteer-hours, the new Monument seems to be on the right track. 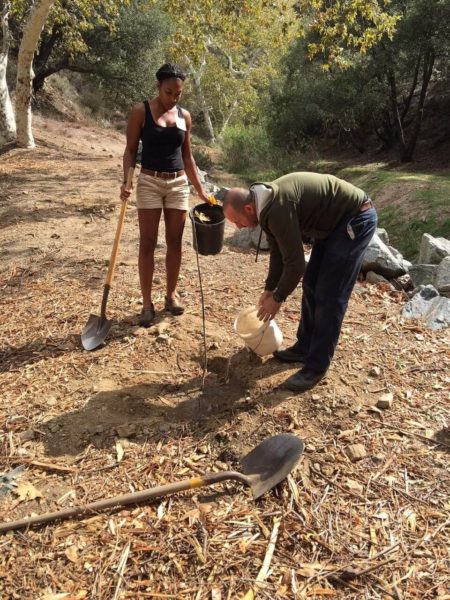 According to the San Gabriel Valley Tribune, in 2014 the Monument was able to raise $3 million outside of Congress – enough to hire a trash truck driver, new bilingual field rangers and visitor information specialists, and partnership and volunteer coordinators who can help raise even more funds and direct eager volunteers. The Forest Service plans to hire four more full-time positions next year and recently received a $900,000 donation from Coca-Cola for trash cleanup and watershed restoration.

All of this new money is in addition to the $3 million budgeted for the Monument by Congress. National Forest Foundation interim President Mary Mitsos told SCPR, “To get $6 million in one year for projects and improvements, I’m not sure I’ve heard of it happening anywhere else.”

In the last year, 2,100 letters of support and calls for increased protection have been received by the U.S. Forest Service and almost 500 native trees and shrubs have been planted around the Monument. Volunteer crews have been hard at work on damaged trails — and notably, not all of that work has been inside the Monument’s borders.

When the boundaries were unveiled, many were upset and surprised to find that some of the most heavily used areas in the San Gabriels were excluded, including the Arroyo Seco and the front range near Altadena. A new volunteer program is about to kick off on the popular trails near Echo Mountain and trails near the Millard Canyon Campground have recently been re-opened for the first time since the Station Fire, thanks to the hard work of volunteers like the Concerned Off-Road Bicyclists Association. Crews are also working in the Vetter Mountain area, which was badly damaged in the same fire.

Next week, Representative Chu will be introducing new legislation that would expand the Monument’s boundaries to include many parts of the Angeles National Forest that people felt should have been included, like parts of the Arroyo Seco and the popular trails near Chantry Flats.

The new National Forest and Monument Supervisor Jeffrey Vail said he was pleased with the momentum and progress so far but stressed that there was still much work to be done. In the coming months, the Forest Service plans to install at least a dozen new multilingual signs. Other mid-term plans include habitat restoration and the removal of invasive plants like the arundo, which soak up five times as much water from the local watersheds as native plants and aggressively out-compete less thirsty plants. 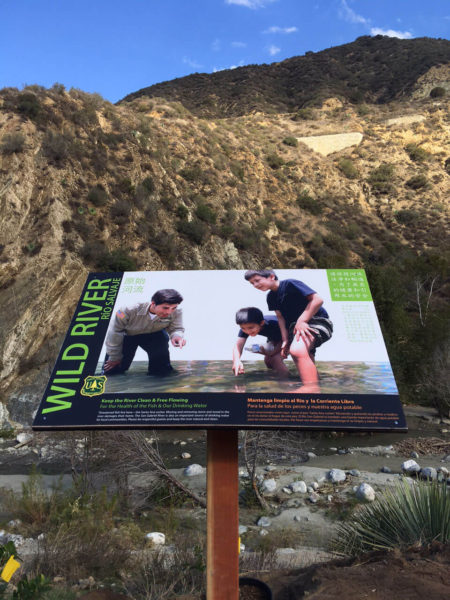 While a recent take by the L.A. Times depicted the Monument as a directionless, trash-filled cesspool with no tangible improvements since its designation change, both the enthusiasm of the many public and private groups that have been hard at work making the mountains better for everyone say otherwise — not to mention the visible fruits of their labors. The event was held at the heavily used Oaks Picnic Area, which has just received $150,000 worth of cleanup, restoration, and trail improvements. Wrightwood’s Big Pines Visitor Center is next on the to-do list for similar improvements.

The Monument is still in the process of developing its Monument Management Plan and expects to have a completed draft by Winter 2016 / Spring 2017. The first round of public comment wrapped up recently and another comment period will be held after the draft is released. There are also countless volunteer opportunities for people who would like to get involved, from trail work to painting trash dumpsters. Supervisor Vail stressed the importance of getting involved to help make the Monument a place that everyone can enjoy. At the anniversary event this week, he said “If people are not satisfied with (the) progress (on the Monument so far), if they see areas where we could improve, please let us know. Working together, we think we can address some of the challenges.”