Runyon is Closed – Where Can I Hike?

The city of Los Angeles has decided to close one of its most popular hiking trails and outdoor spaces from April to July while it fixes a water main running underneath part of its boundaries.

Despite lacking any sort of wilderness feel, Runyon Canyon Park is a worthwhile L.A. hiking trail — not to mention one of its most popular routes. It’s fairly transit-accessible, can be a surprisingly good workout, offers truly brilliant views on clear days and great places to watch the sunset and sunrise, and is one of the few officially-sanctioned off-leash dog parks in the Los Angeles area.

If Runyon has been part of your outdoor routine, there’s no need to hang up your hiking shoes until the park re-opens. In fact, now is the perfect time to explore some of the nearby Runyon alternatives. 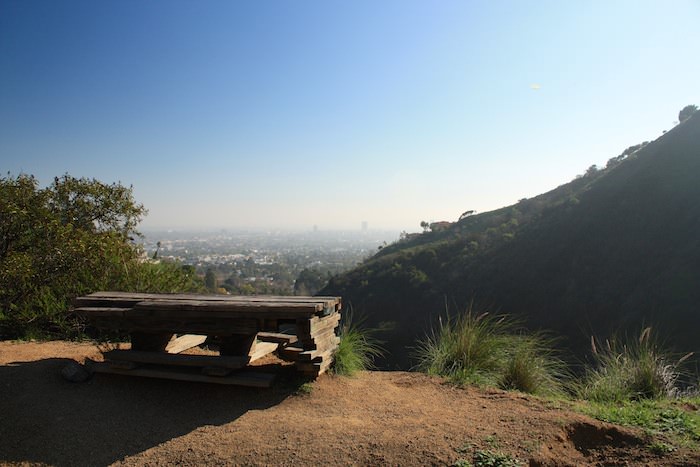 If you’re looking for almost the exact same views and terrain as Runyon without the crowds (or dog poop), just head a few blocks west of Runyon’s Vista Street entrance to this little known and oft-forgotten sliver of green space. Purchased and preserved by America’s most favorite sometimes-mustachioed quizmaster, the Open Space is an almost totally undeveloped open space in the Hollywood Hills. Two sets of fire roads are connected by a rugged and steep use trail, providing lovely views of the city and lots of solitude, especially considering the location. Trailhead parking is minuscule, so we recommend taking Metro Line 217 to Hollywood and Curson and just enjoying the extra bit of elevation gain as you walk up the street. 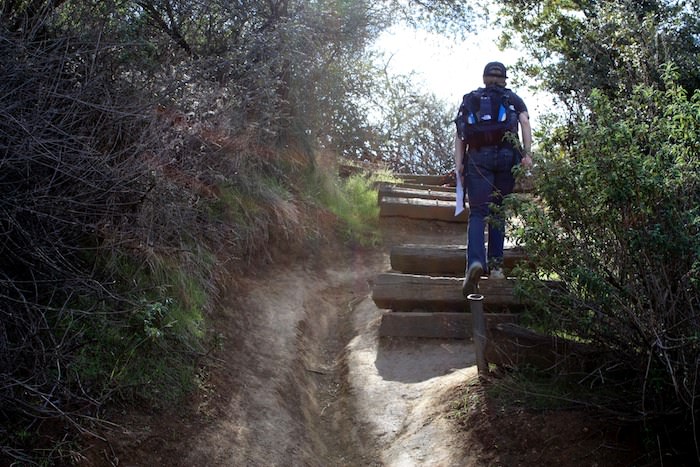 Just on the other side of the Hollywood Hills, discover what Valley hikers have known for a while now: Wilacre Park is a great place to hit the trails. Often mistakenly called Fryman Canyon Park due to the nearby roads (that name technically belongs to another slice of nearby protected parkland), the Betty B. Dearing Trail begins just off Laurel Canyon Boulevard and forms a nice, moderate loop trail. You’ll get great views of the Santa Susanas to the north and the San Gabriels, Verdugos, and Griffith Park to the east, as well as a chance to visit the TreePeople’s headquarters in Coldwater Canyon Park. The modest parking lot is free, and this route is also accessible by Metro line 218, which stops almost directly in front of the trailhead. 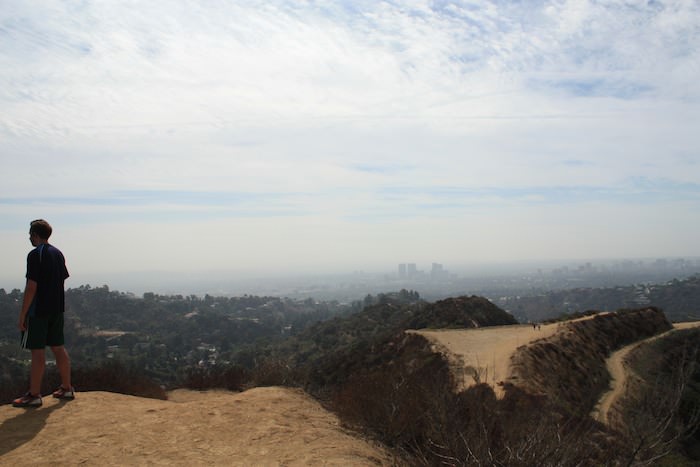 The geographic center of the city of Los Angeles lies in this unit of the Santa Monica Mountains National Recreation Area — the nation’s largest urban National Park Unit — just north of ritzy Beverly Hills. There are plenty of options for hikers of all abilities in this park, from leisurely strolls around a reservoir (which was also used as a set in numerous films and television shows), or a tougher trek up the Hastain Trail in the southern section, where you can grab some great vistas after you’ve huffed your way to the top. The visitor center also has a ton of outdoor programs for kids, families, birdwatchers, botanists, and just about anyone who’s interested in the outdoors. Public transit sadly doesn’t reach this park, so definitely keep an eye out for the notoriously trigger-happy stop sign cameras. 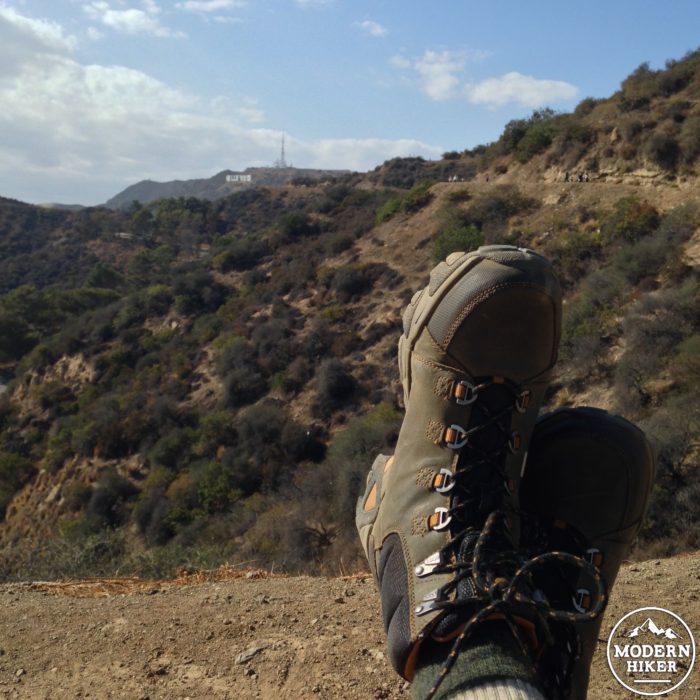 You’ve seen the Hollywood Sign from the top of Runyon … isn’t it about time you paid it a visit? Hikers who like the steep workout aspect of Runyon will appreciate the no-nonsense single-track ascent from Wonder View Drive (as well as a quick side trip to the fabled Wisdom Tree), while the more casual hikers will likely prefer the longer but gentler route from Bronson Canyon (with a quick side trip option to the Batcave from the campy 60’s Batman television series). Unfortunately, Griffith Park has an embarrassingly small number of mass transit access points and neither of these trails can be easily reached without a car.

on the way to the summit of Mount Hollywood

Don’t have a car (or don’t want to fight people for parking) but still want to get a good hike in close the Hollywood Hills? Mount Hollywood is definitely a more Metro-accessible peak in Griffith Park. For a great hike (and one of my personal favorite Griffith Park treks), take the Red Line to the Hollywood / Western stop. Walk north on Western Ave and head into Griffith Park via Fern Dell. From there, you can head up one of the Observatory Trails or Western Canyon to Mount Hollywood for fantastic views of the Hollywood Sign and the city in general. On the weekends, a 25 cent shuttle departs from the Vermont / Sunset station and will drop you off at the Greek Theater, where you can hike up the East Observatory Trail or a longer, more gradually ascending fire road climb past Glendale Peak. Or you can take the shuttle to the Observatory itself, where you can enjoy some rare Griffith Park shade in the Berlin Forest and continue north to the summit. 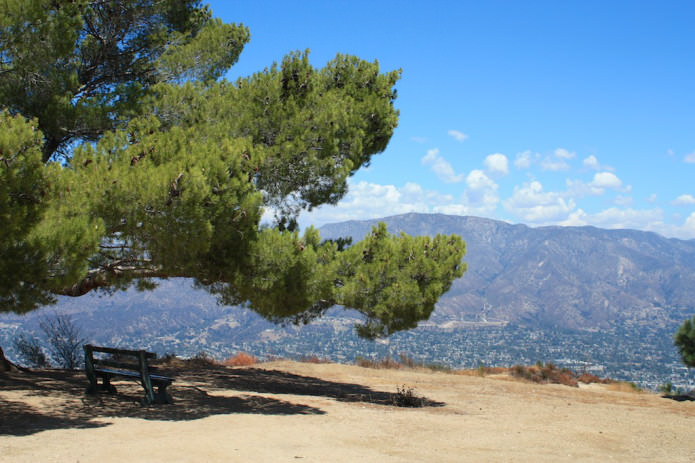 If you’re one of those Runyon fitness types, you’re going to love the challenge just a few miles east in Glendale’s Wildwood Canyon Park. The Vital Link Trail is a steep, shadeless, and sometimes grueling climb into the Verdugo Mountains … but the views of the San Gabriels are worth every drop of sweat. Leave your car in the ample lot near the bottom of the park — just make sure you get started early and bring more water than you think you’ll need on this one!