I like to pride myself on having a pretty good sense of place and direction. Whether or not those senses are accurate is another story, though, so it always helps to have a bit of backup with you.

Of course, a paper map is one of the Ten Essentials, and I never leave home without studying one and taking it with me on the trail … but if you’ve got an iPhone 3GS, now you can easily answer the question “What’s that mountain over there?”

Peaks is a new app from Augmented Outdoors that uses the 3GS’ GPS and compass to display an augmented reality view of nearby peaks. You hold up your iPhone to the mountains, and any peaks the app has information on will be labeled on your screen, along with information like their elevation and distance from your current position: 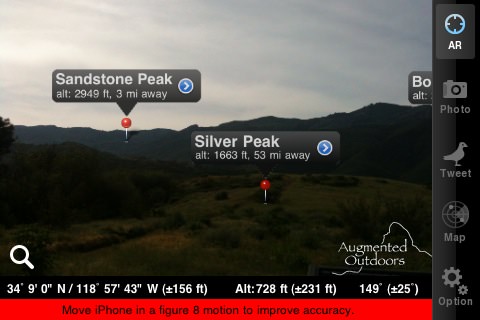 Touching a marked peak will bring up a little bit of basic information, like the aforementioned elevation and exact latitude and longitude. You can also get directions to the peak, and if you have cell service, you can also get a weather forecast for the area. 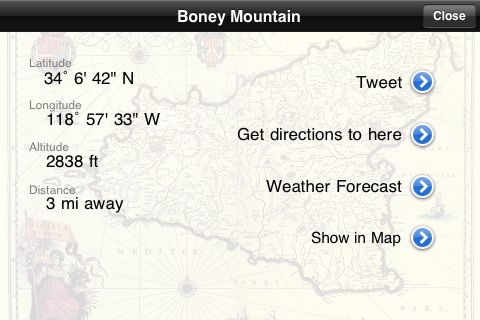 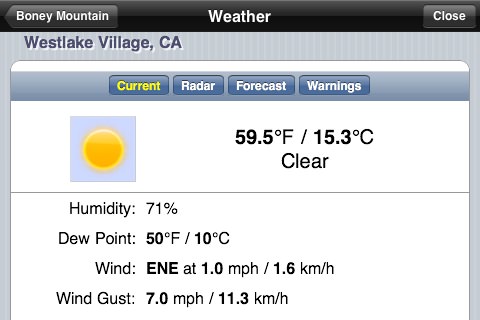 Functionality beyond that is pretty basic – from the main screen, you can take a photo of your horizon view to save to your iPhone’s photo library or, if you’re the tweeting type, automatically generate a new tweet referencing the closest peak – with an option to provide a link to the peak’s location in Google Maps. 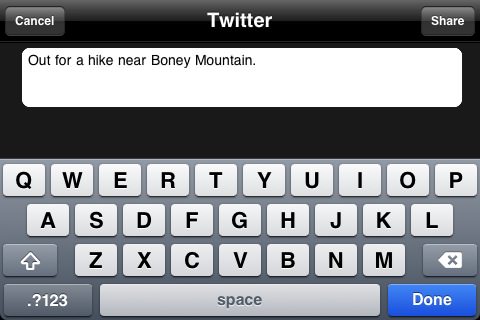 If you wanted a more top-down view of your location, you can also see where you are on Google Maps, along with nearby peaks the app recognizes: 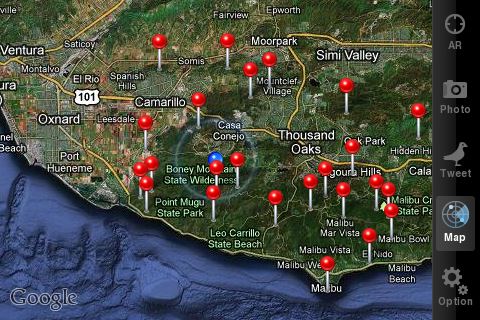 The app won’t identify every single peak around, but it does jam an impressive amount of information into its relatively small size. This is the coverage for the L.A. area as of 4/25/10. You can see the Cleveland National Forest is a little left out, but the Angeles and San Bernardino Forests are very well represented. 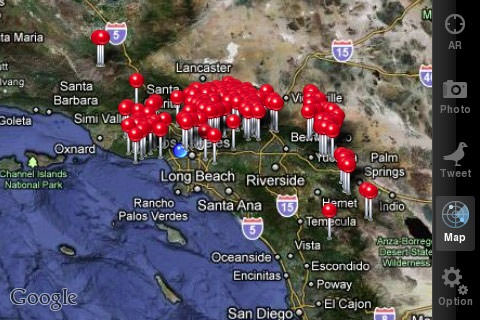 How Well It Does It

For an app that claims to tell you exactly what peaks you’re looking at, Peaks has to be accurate if nothing else. Overall, I found the app to be mostly accurate. On a recent hike in Point Mugu State Park, the augmented reality view was just a slight bit off when locating Boney Mountain: 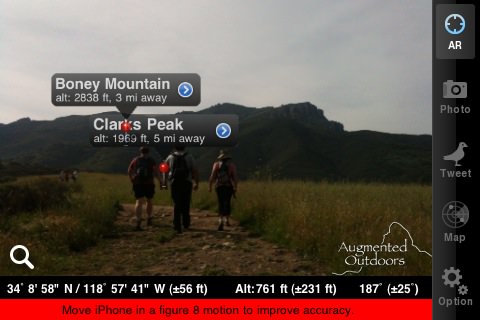 I am prepared to chalk that up to the hardware of the iPhone, though. Other “augmented reality” apps, like the Yelp Monocle view, seem to also have a bit of lag when actively showing the user what’s in their camera-view. In fact, the Unofficial Apple Weblog just posted an interesting interview with the guy who developed the Yelp Monocle, and he makes it sounds like Augmented Reality just barely works on the current generation of hardware.

When you’re close to something, like I was in that Boney Mountain view, it’s usually a manageable error – the push pin’s almost in the right place, so it’s easy to just look for the high point nearby for the correct spot. However, when you’re looking at peaks that are farther away, it’s a bit more of an issue. Here are two shots taken from the third story of LACMA looking north toward the Hollywood Hills. Both peak views are way off: 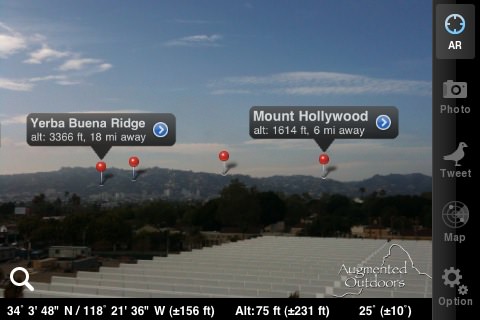 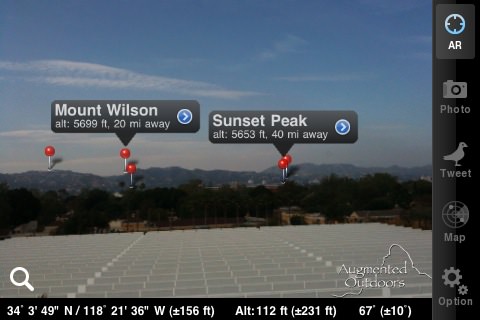 These pictures were taken in full 3G coverage after using the “manual recalibration” of the compass on the iPhone, too (if you’ve ever seen someone waving their phone around like a figure 8 for no reason, that’s what they’re doing), so I can’t chalk these up to magnetic interference or a spotty cell signal.

After emailing the developers of Peaks about this, they acknowledged these sorts of errors usually lie with the iPhone’s compass. When they were testing the app in the Alps, they mentioned that the iPhone’s compass only matched an actual standalone compass about 70% of the time, and that it also had a knack for picking up on ore deposits, too. Until the hardware improves, though, they do have a workaround:

If you’re looking at your iPhone screen and note that the peak markers aren’t where the peaks actually are, you can tap and drag the markers to the correct place. Obviously, this works if you know the area well, but even if you don’t you should be able to locate the most prominent peak in your view and center that one up. It’s not perfect, but it works.

The concept of Peaks is definitely worth exploring, and I think the current $2.99 price is fair for an app that identifies mountains out in the wilderness – but unfortunately, the lack of accuracy due to the hardware works against the very purpose of the app itself. The manual calibration does help, and makes the app at least worth checking out – but it’s a little disappointing that the hardware limitations keep Peaks from being the killer app it could be.

Beyond the accuracy issues, I would also like to see some form of a radius limit on future versions of the app. While it’s nice to know there’s another peak 60 miles behind the one I’m looking at, I’d rather be able to keep the peak information limited just to those in my visual range.

I will be closely watching the future updates for Peaks, and hopefully will be able to recommend it with a few fixes (or with the next generation of iPhone). Until then though, this could be a fun app, but not something you’d want to depend upon. You’re all still bringing paper maps with you anyway, right?