The Grand Canyon is just one of those places that no matter how many pictures you’ve seen, will still take your breath away the first time you actually lay your eyes on it. It’s been drawing tourists from all over the world and capturing the imaginations of people who’ve seen it for thousands of years. And with scenes like this everywhere you look, it’s easy to see why: In the modern era, there have been countless images of the Canyon reproduced – in etchings, paintings, postcards, photographs, and video. Now, Mark Klett and Byron Wolfe are taking some of those historic and not-quite-as-historic images and are superimposing them on modern photographs in a process called rephotography. Rephotography is most often used by scientists and anthropologists to track changes in a specific area, but Klett and Wolfe will often intentionally obscure those areas and use sources from several different time frames – so the result is more art than science (although the two do have backgrounds in geology and anthropology).

. The book collects five years’ worth of these mosaics, and I think they do a great job of giving you a very unique view of this famous place: 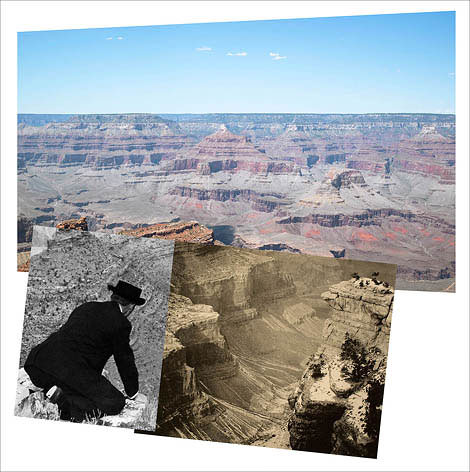 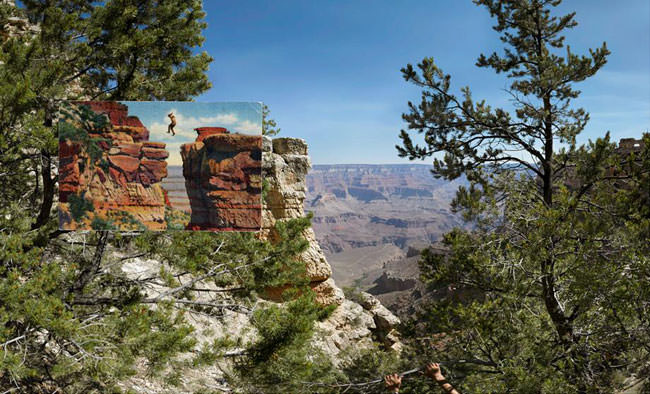 One of the things I tend to think about when looking at a canyon – or any impressive geologic formation – is just how long it took to make. When you look down into the Grand Canyon you’re literally looking at 2 billion years of earth history. It’s so rare that we get to have such a visceral interaction with something that is just clearly not on a human scale that all sense of time just seems to melt away when you’re gazing at it. Maybe that’s why this project is so interesting to me – it really lets the viewer experience that wonder on both a human scale AND a geologic scale.

The full-size images are available at their web site – and they’re definitely worth spending some time gazing at. There are also a few videos showing how the two create some of the more complex works.