When you think of river rafting, you inevitably think of rivers – and we here in Southern California aren’t really accustomed to having rivers around.

Sure, the L.A. River is technically navigable by kayak, but trips are still rare and often sell out in a matter of minutes … also, unless you’re in a few small portions it’s still kind of ugly. In the future, the city has plans to revitalize the river and I hope it will be great when it’s done but that’s probably going to take longer than the the city’s estimated 20 year timetable.

I’ll admit – rafting has always been a bit off my radar. It always seemed like something fun to try, but it was never going to rise high enough on the list to be a primary destination – so when the team at SoCalRafting.com invited me up to Kernville for a rafting intro I was very interested. Their team welcomed my boyfriend and I in their building just off Kernville’s central Circle Park. It’s only two blocks away from a Forest Service ranger station stocked with maps and guides to the local mountains and just down the road from the excellent Kern River Brewing Company (great place to plan your lunch if you’re here for a day trip!)

We got our gear together at their storefront and drove a van shuttle up to their launching site on the Upper Kern River. We strapped our helmets on, tightened our life jackets to near-asphyxiation levels of snugness and hopped into the river.

Since I’d never been rafting before, our guide John and the company’s online guru Diana went over some basic maneuvers in a fairly calm section of the river and gave us some tips on the best way to paddle with or against the water (and a recap of some of the safety tips for good measure). We also just spent some time soaking in the beautiful scenery along the river: 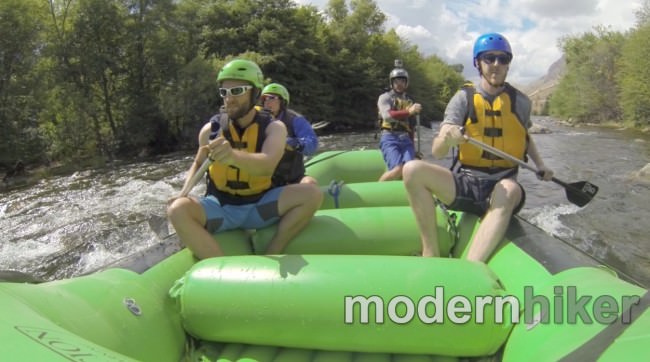 I didn’t really realize how rafting worked before this trip – but the guide for each boat is basically navigating the river and calling out directions for each side of the raft to get the boat to go where it needs to. It’s definitely a complicated skill that I gained a fast appreciation for … and I also appreciated that I could just zone out and listen for the shouted instructions instead of worrying about where we were going or what rocks we were drifting toward.

The team spent an hour taking us down a three mile long section of the river through some Class II and III rapids – nothing too dangerous but definitely a LOT of fun. We had a blast going through the whitewater … and there’s a chance that maybe one of us got to experience what it’s like being thrown backward out of a boat … 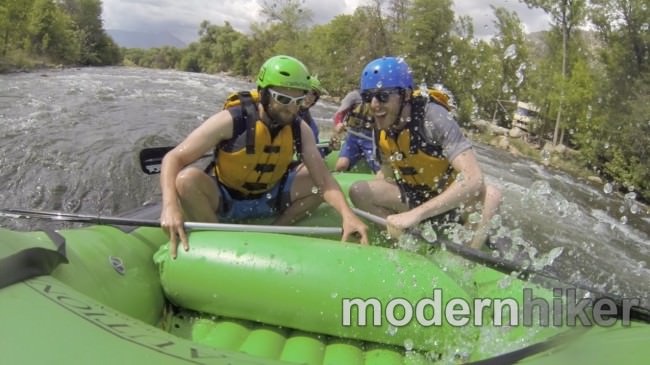 Diana noted after the spill that I followed all the proper safety procedures and grabbed onto the raft before she even knew I was gone … so while I may not be the best at staying inside a raft in rapids, I can at least take comfort in knowing that I’ll know what to do the next time I get tossed out, too!

Overall, I had a really great time with the SoCalRafting.com team – everyone was fun, friendly, and knowledgable. I would definitely recommend checking these guys out if you’re in the area, or making a rafting trip part of a hiking trip to the Sequoia National Forest (we did a great hike to Salmon Creek Falls earlier in the day). They offer a variety of very affordable trips on the river in rafts, inflatable kayaks, and tubes, and they have some more fun stuff planned for the future.

If you head up north, tell them Modern Hiker said hi!

***Because this year has been very dry in the region, most rafting operators on the Upper Kern expect their best water to peak earlier than usual. If you book a trip at SoCalRafting.com before the end of May, you can take 20% off the price with coupon code d5h9y at checkout.

Disclosure: SoCalRafting.com guided tours range from $29 to $99 per person. The trip I took was provided free of charge.