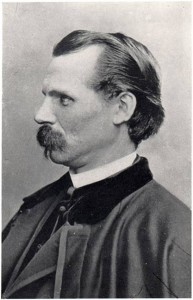 This year marks the 150th Anniversary of the Civil War, and yesterday the Smithsonian Washington Post article talks about Professor Thaddeus Lowe, who was the first person to propose an airborne reconnaissance unit in the United States. After a demonstration of an airborne telegraph (which just consisted of a very long telegraph wire hanging out of the balloon) Lincoln was ready to nerd out on this newfangled technology, but General Winfield Scott was not – and Lowe met a lot of resistance from the Army.

Eventually Lowe got his Balloon Corps for the Union Army and later retired in Pasadena, where he built a railway into the San Gabriel Mountains and the White City resort near the mountain that would come to bear his name. Today most of the structures are gone but many foundations and parts of the railway remain – and it’s all easily visible on one of my favorite hikes.

And they say L.A. doesn’t have any history …