After more than a decade of planning, public comments, legislation, meetings, and studies, the LA Times reports President Obama is set to declare the San Gabriel Mountains National Monument this Friday, October 10th.

The Times says the announced Monument will be about half the size of the Angeles National Forest’s 655,000 acres – and will exclude portions of western San Bernardino County like Wrightwood and Mount Baldy. Some voices in those areas were opposed to the Monument for various reasons, although most of the fears expressed were not founded in fact. Robby Ellingson, General Manager of the Mount Baldy Ski Lodge sent out an email blast last week denouncing the Monument and suggesting it would reduce access, increase fees, and threaten the existence of recreation areas – none of which happen with a National Monument designation. The email also called a declaration by President Obama “undemocratic,” even though a declaration from the Executive is a power granted by the Antiquities Act of 1906, a law passed by Congress. Since the Act’s passage, all but 3 Presidents have used it during their terms to establish new National Monuments.

In Pasadena, Ellingson attended an anti-Monument rally along with the California Off Road Vehicle Association, which was concerned about losing OHV access where they already have it (they won’t), Assemblyman Tim Donnelly, who was protesting the “Federal land grab” of the Monument (the land is already Federally owned), and an unidentified woman who said she “feared the UN would seize control of the San Gabriel Mountains if Obama were to declare them a national monument (no comment).

Regular readers know Modern Hiker has been covering this issue almost since the site began – and although we were frustrated with the speed, quality, and clarity of the pro-Monument messaging in addressing some of the confusion that helped inspire those protests we are very, very happy to hear that a Monument is happening for our San Gabriels. We hope this leads to new resources for the Forest Service, who for too long have been underfunded and overworked in one of the country’s most heavily used National Forests. Most of the Angeles’ budget is tied up in firefighting, leaving recreation improvements primarily in the hands of hardworking and dedicated volunteers – many of whom are former Forest Service employees who were previously laid off due to budget cuts. The Monument’s increased focus on recreation and access to different sources of funding should alleviate those problems. 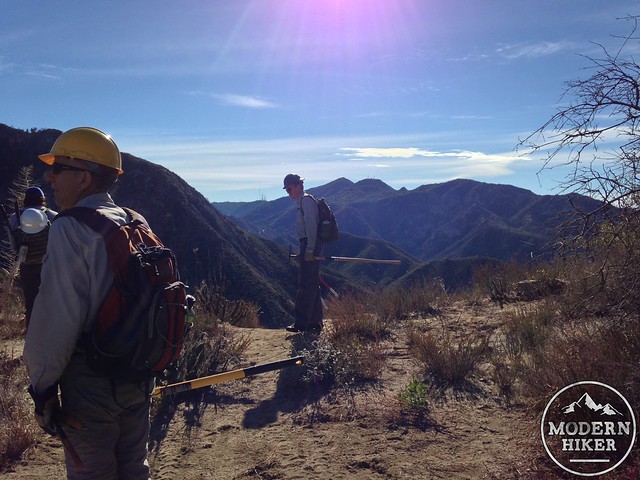 We also hope that this Monument is just a step toward full protection as a National Recreation Area, which was outlined in Representative Chu’s legislation. Such an NRA, like the one in the Santa Monica Mountains, would provide a sweeping overlay of public and private land partnerships as well as National Park Service funding and staffing and a greater focus on recreation for open-space-starved Southern Californians.

But most importantly, we are thrilled this designation will bring increased awareness and attention to the wonderful outdoor opportunities we have in Southern California. When I first moved to Southern California 11 years ago, I was definitely not what you would call an “L.A. fan.” I was miserable here for years until I “discovered” the San Gabriels and hiking – and was shocked that no one was letting people know about the incredible hiking and wilderness within a short drive of the city. It’s the reason I started Modern Hiker and – without any hyperbole – it’s also the reason I stayed in (and now love) Los Angeles. Discovering and enjoying the outdoors here has changed my life in countless positive ways, and I sincerely hope that all Southern Californians – both new transplants and those who have been here for generations – can look upon our backyard mountains with a new appreciation and sense of wonder.

Congratulations and thank you to everyone who has worked so hard to make this happen. I can’t wait to add something like this to my National Park / Monument brochure collection:

San Gabriel Mountains Forever is holding a celebration on Friday from 3-5PM in El Monte if you are interested in attending. Sadly, I’ll be on the east coast for a wedding, but will be there in spirit!

UPDATE: The Forest Service has unveiled their introductory San Gabriel Mountains National Monument web site, and KPCC has a map of the new Monument’s boundaries on their site – it seems to include most of the southern half of the Angeles National Forest except for the foothills in the southwest and a few small exclusions near Mount Baldy Village and Wrightwood.