Talk about moving at the speed of government.

Since 2005, people have been working toward making the San Gabriel Mountains a National Recreation Area instead of a National Forest. A National Park Service study from that year through 2009 yielded some inspiring conclusions – as the NPS put forward three proposals for new National Recreation Areas that ranged from nearly the entire San Gabriel Mountain Range to some of the range’s river canyons to a network of urban and wilderness rivers stretching through the Puente-Chino Hills. Their final recommendation was revealed last year – and it seemed to make almost no one happy.

Instead of new protection and status for the San Gabriel Mountains, the NPS recommendation instead patched some of the foothills of the lower San Gabriels in with the San Gabriel and Rio Hondo Rivers, stitched them together with the Puente-Chino Hills, and then said this new “San Gabriel Unit” would be managed as part of the Santa Monica Mountains National Recreation Area. 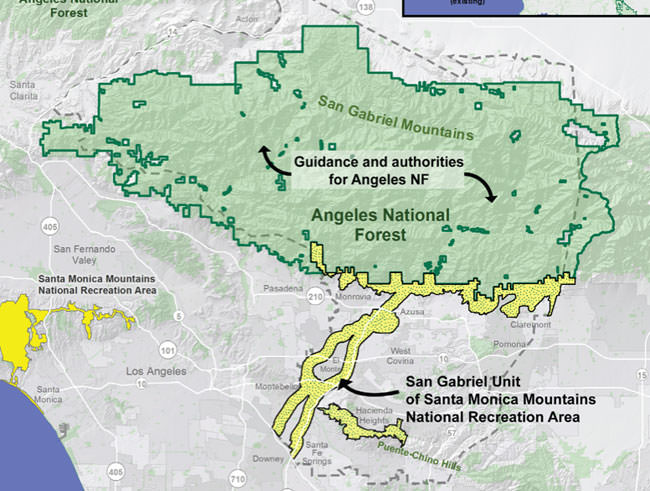 In response to this lackluster recommendation, groups like San Gabriel Mountains Forever worked with Representative Judy Chu, who introduced legislature that would create a new San Gabriel National Recreation Area with borders that encompass nearly the entire Angeles National Forest, as well as the river valleys and foothills included in the NPS study. 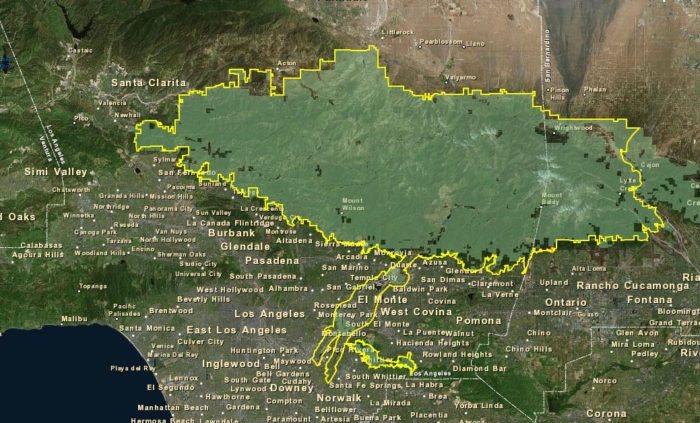 I don’t know if you’ve noticed, but Congress hasn’t been able to do much as of late. 2011’s Congress was the least productive in modern history … until 2012’s came along … and then they were out-nothing’ed by 2013’s star lawmakers. Perhaps sensing a trend, San Gabriel Mountains proponents instead decided to make direct pleas to voters and to the President himself. The groups hired the largest Republican polling firm in the country and found that a staggering 80% of Los Angeles County voters supported the increased protection for the San Gabriel Mountains and river valleys Chu’s legislation would provide.

The poll showed majorities across every demographic category, finding

On the same day they announced the poll, Rep. Chu also announced she had made a direct plea to President Obama to invoke the Antiquities Act of 1906 to bypass Congress and declare the area a National Monument, providing an immediate (and much-needed) boost in resources to the region. Since 1906, 15 Presidents have used the Act to establish new Monuments or add territory to existing Monuments or Parks – and many of them have later gone on to become full-fledged National Parks.  Chu said, “We’ve pitched it (to the Obama Administration). They are positively inclined.”

Previous proposals have had the Forest Service maintaining control over the majority of the region with additional resources and support from the Park Service. Reading over a summary of Chu’s legislation (PDF) it seems like the Park Service will be taking over.

An upside to giving this responsibility to the Park Service instead of the Forest Service is that the Park Service’s mission (generally) is more recreation and user-experience based while the Forest Service (generally) also has the less glamorous responsibilities of managing a region’s natural resources in addition to providing recreation and preservation. The Park Service also tends to get more money and public relations opportunities, which can help make a region more attractive to people who may otherwise pass by a National Forest.

The bill (and, I’m assuming, the exercise of the Antiquities Act to establish a National Monument) would not override existing rules or regulations, such as off-highway vehicle use, interfere with local water or utility rights, or use eminent domain to acquire lands – the only land that would be managed by the Park Service would come from existing National Forest and Bureau of Land Management lands. The plans also allow for significant communication and cooperation with the surrounding communities – as well as ways for them to opt-out from plans if they prefer.

The Forest Service and White House have announced a joint meeting on August 26th for public comments on the issue, although no further information is available on that meeting yet. I will post more details as soon as I learn them.

In the meantime, San Gabriel Mountains Forever has a web-app to send a message to the President urging him to use the Antiquities Act to establish a National Monument.