It’s a refrain we’ve heard many, many times before — the national parks are being loved to death.

All too often, it’s social media that gets the blame — that convenient boogeyman that millennials just can’t seem to get enough of when they’re not buying avocado toast instead of houses and destroying literally everything. And yes, while it’s true social media has done much to drive attendance in national parks and other public places, there are so many factors involved — from the general low-cost of outdoor activities to marketing campaigns from tourism boards and the parks themselves to better outreach to new communities — that blaming this issue solely on social media is rhetorically lazy.

I’m not going to attempt to sort out that particular can of worms just now — but whatever the cause, we do have a serious problem in our parks.

Across the board, attendance in America’s national parks have increased by a 7.72% over last year’s numbers to almost 331 million visits — a double-edged sword that shows new people are experiencing these incredible places but also putting unsustainable strain on the parks themselves. An ever-increasing visitation combined with a chronically shrinking budget (down 11% this year) and a growing backlog of essential repairs is a recipe for disaster.

Some parks have been tackling this issue already. When traffic snarled the valley Zion was the first to institute a shuttle system during its high season. But visitation at Zion has nearly doubled since the shuttle went into service, and now even that system is getting overwhelmed. In 2016, Arches National Park showed that its parking lots and trailheads are generally full most of the day from March through mid-December. Management there has been talking about requiring reservations for several years but now they’re getting serious about it — public meetings for a new user management plan will likely lead to a decision in 2018.

As lovers of the outdoors, we want to make parks as accessible to as many people as possible — but at what point do the increased crowds diminish the experience of visiting a national park in the first place? We all have vivid memories of breathtaking moments — seeing Yosemite Valley for the first time, or gazing down into the Grand Canyon, or being stunned by the blue of Crater Lake. Will we still be able to inspire the next generation of outdoor stewards if their first experience in a national park includes driving in circles for an hour waiting for a parking spot or waiting in an amusement park-style line for their photo op or shuttle? Might a permit system be the next (begrudgingly) logical step for the parks? 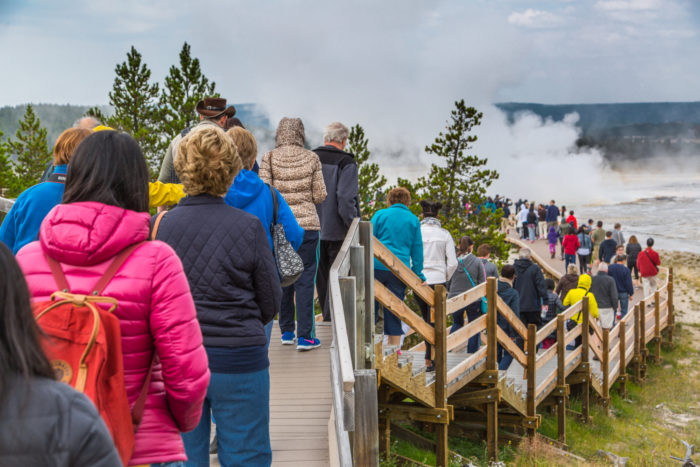 We all have our own horror stories of trying to track down a permit for a trail, so I’m more than a little hesitant to give a thumbs-up to more red tape, but I also think reducing overcrowding and ensuring both the protection of the parks’ landscapes and the park-going experience might be worth the hassle … The Park Service “preserves unimpaired the natural and cultural resources and values of the National Park System for the enjoyment, education, and inspiration of this and future generations.” But perhaps it’s time to focus less on the “unimpaired” and more on the “preserves” in that mission statement?

Before a park decides to institute permitted or timed entry, though, I think there are five things every park has to do first:

Before Anything, Public Outreach: A top-down approach for something like this is never going to fly. If permits are going to be implemented, the individual parks have to provide ample opportunity for local input to find a system that works best both for regional and national visitors and the locals who live near gateway communities. This is a complex, multi-faceted problem and the parks deserve individualized solutions.

Improve Existing Infrastructure: At one point, Zion’s mandatory shuttle system was controversial — but in places where crowds tend to congregate in small areas like in Arches or Yosemite Valley, they just make sense. Taking cars off the road makes the parks more pleasant to get around, and dependable shuttles mean hikers can build their own long-distance routes without having to organize their own two-car pickups.

Promote Neighboring Parks: At Joshua Tree National Park, which is also experiencing its own visitor onslaught, groups like the Mojave Desert Land Trust have begun to promote the nearby National Monuments as alternate hiking destinations free from the J-Tree crowds. National Parks should strive for similar efforts with neighboring monuments, National Forests, state parks, and other open spaces. The Park System has more than 400 units, but the most popular 26 account for more than half of all visits throughout the entire system. If we can ‘spread the love’ around to neighboring units in other systems, we can help mitigate the negative impact of increased visitation.

Permits Must Be By Lottery: It is absolutely imperative that park entry permits not become available only for those who can afford them. Limits must be set for tour operators and individual permits have to be drawn by random lottery, with a number set aside for walk-ups and no-shows. Ideally, the parks could use a system that allowed rolling reservations several months in advance, much like the new upgraded California State Parks Campground reservation system.

Rethink Time Limits and Pricing: Where possible, permits should be broken up into regions or by points of entry in the parks, and not always as a park-wide blanket. The central valley in Zion attracts crowds, but the western backcountry only receives a fraction of the visitors. If a visitor chooses to stay in a certain area of the park, that shouldn’t prevent another visitor from using a different area just because they’re in the same park. Perhaps the park could also set aside a number of permits for visitors who get to the park without a car, and if we’re limiting visitors’ time, perhaps those parks with permits should also offer shorter time periods for a lower price (currently most parks have a flat per-vehicle entry fee that is good for 7 consecutive days).

What do you think? Is it time for Parks to investigate a permit system for heavily-used trails or during high visitation seasons?