The third in a series on hiking the Annapurna Base Camp trek in Nepal with Active Adventures.

If you’re not acclimated to cities – especially cities in the developing world – a day and a half in Kathmandu might have you feeling a little on edge. On Day 2 of Active Adventures‘ Annapurna Base Camp Trek, you’re back at the Kathmandu airport and on a quick flight to nearby Pokhara, a much smaller lakeside town that serves as the gateway for many Himalaya excursions (as well as a major getaway destination for many Nepalis).

I enjoyed my time in Kathmandu, but Pokhara was definitely a breath of fresh air. Smaller, cleaner, and easier to navigate, Pokhara also doesn’t (yet) suffer from high-rise buildings blocking the views of the mountains. It also helped that the low clouds that had been blocking views of the Himalaya since I arrived were finally starting to clear here, allowing me to see both the snow-capped peaks in the distance and paragliders hovering around the closer mountains. 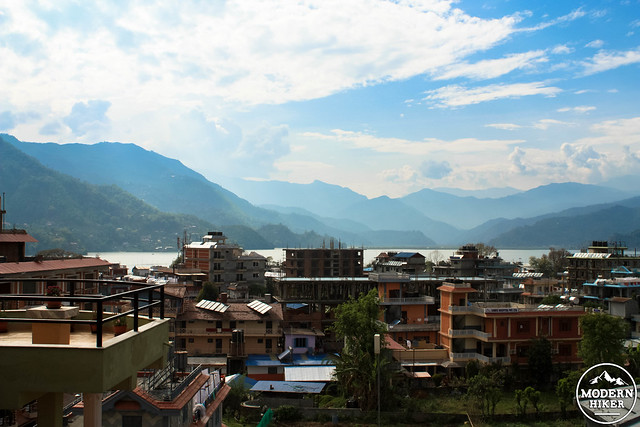 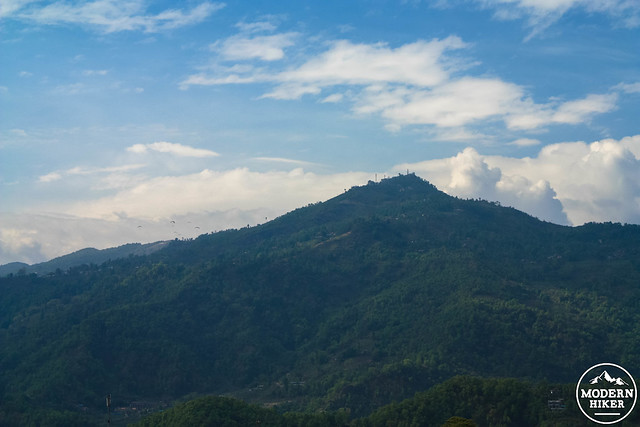 Pokhara’s lakeside promenade and shop-and-restaurant lined main street are a beautiful introduction to the countryside of Nepal and a great place to get a little more interactions in with the Nepali people – who are almost overwhelmingly welcoming and happy to have visitors. 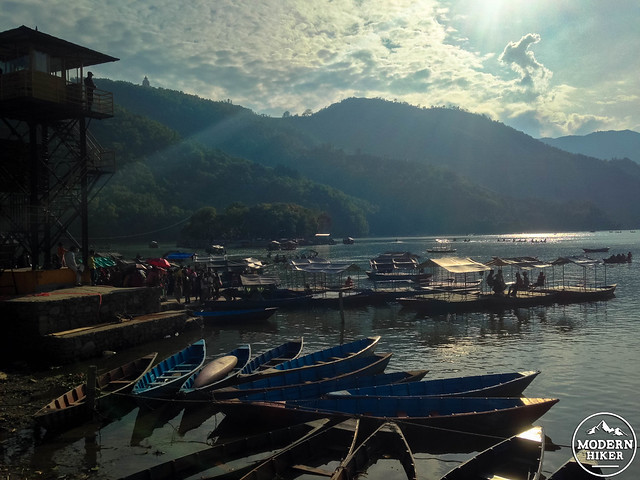 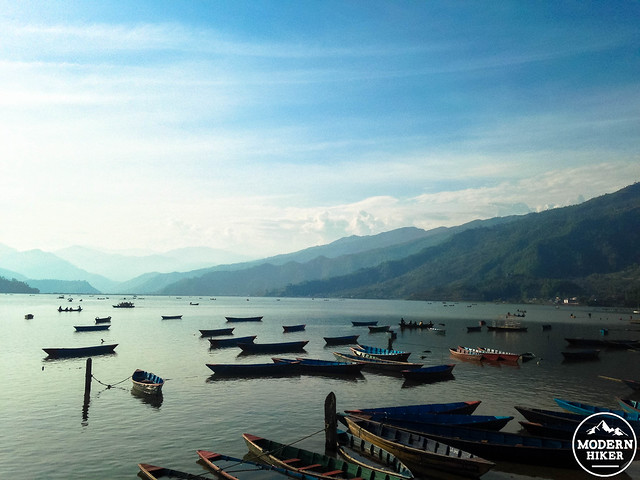 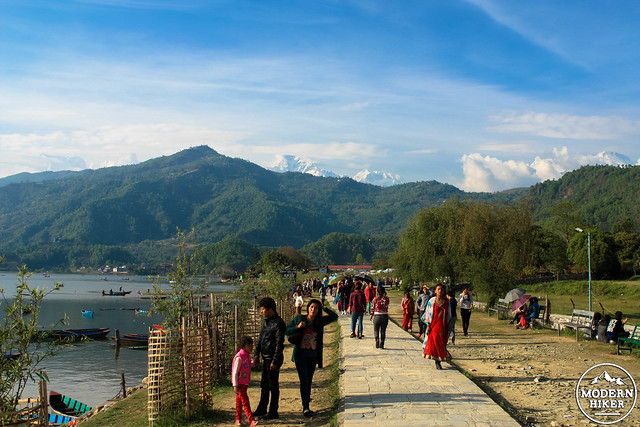 You won’t spend long in Pokhara, though – it’s just a half day and your last night’s sleep in a hotel before you put on all your layers of various-climate hiking gear and pile in a van to Nayapul, the beginning of the Annapurna Base Camp Trek. Here’s a thing that might surprise you … because when you think about Nepal, you’re most likely picturing scenes like this: 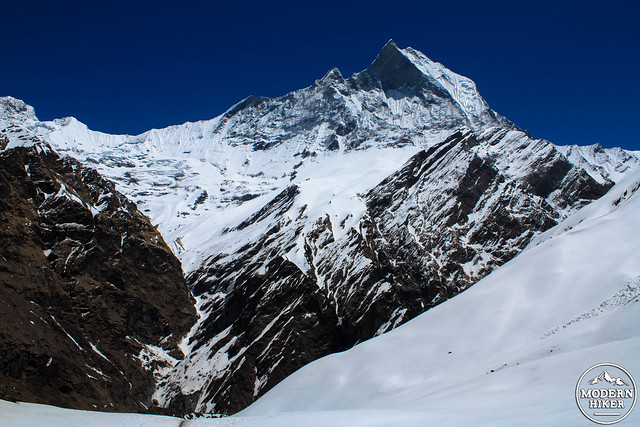 And yes, those exist and you will get there on this trek … but it doesn’t start like that. The Annapurna Base Camp Trek begins at just 3510 feet in elevation (1070m) in a lush monsoonal forest, where structures ancient and modern are swallowed by green and the air can be thick with a humidity that seems like it’s always threatening to break into a thunderstorm.

Let’s just say, as a Southern California hiker spoiled by nearly constant low humidity, this was a bit of a shock to the system. 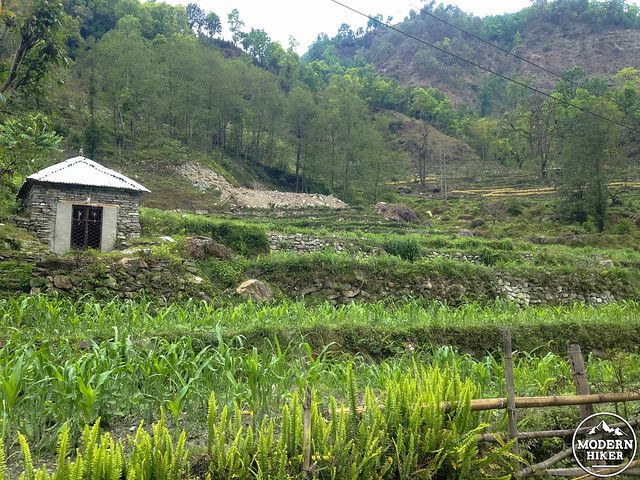 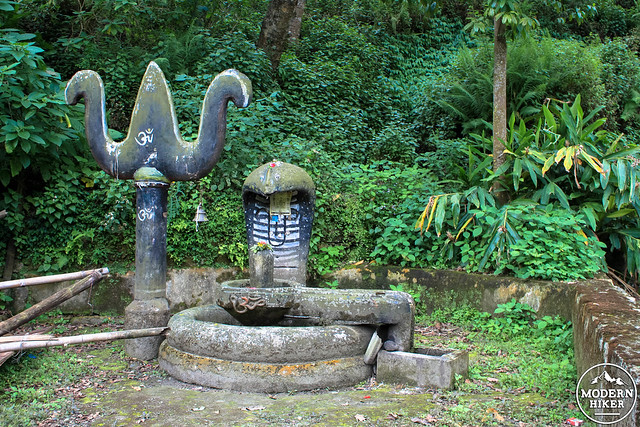 Luckily, the Active Adventures pace is a pretty conservative one. They set the speed on moderate for a few reasons – because you never really know what the hiking ability of your group is going to be, the weather is reliably unpredictable, and it’s good to leave extra time in case people have altitude issues later on in the trek. This first day sets the pace pretty well – you’ll trek about 7.5 miles along the Modi Khola river to your first overnight tea house, stopping for lunch and tea breaks along the way (those tea breaks become a wonderful motivator on the tougher stretches of the trek).

For its entire distance, the Annapurna Base Camp trek travels through and around Gurung villages that are both way stops for trekkers and homes for the people who live in the region. The trek begins near a more urban-feeling roadside town but very quickly you’ll be crossing glacial streams and rivers on suspension bridges and making your way through impressive terraced farmlands. 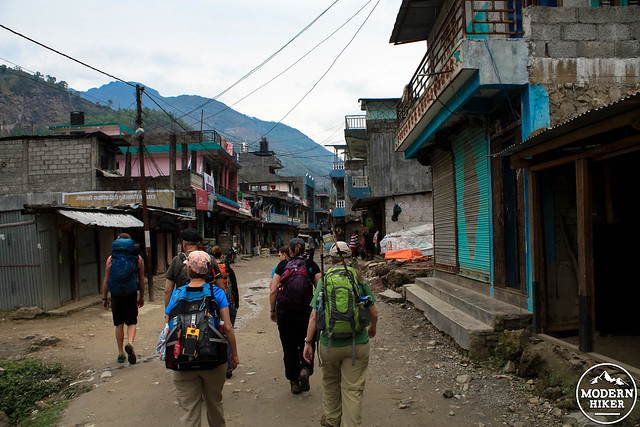 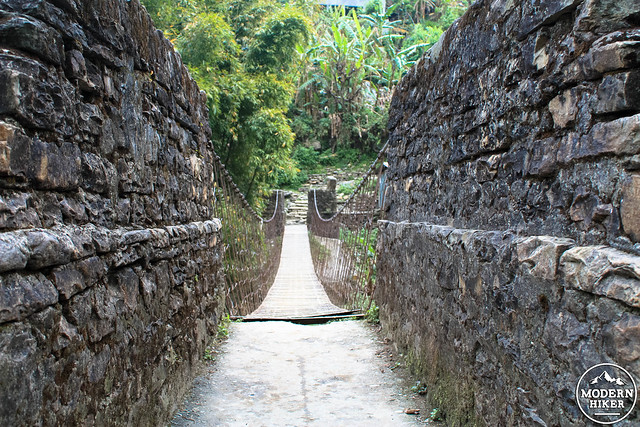 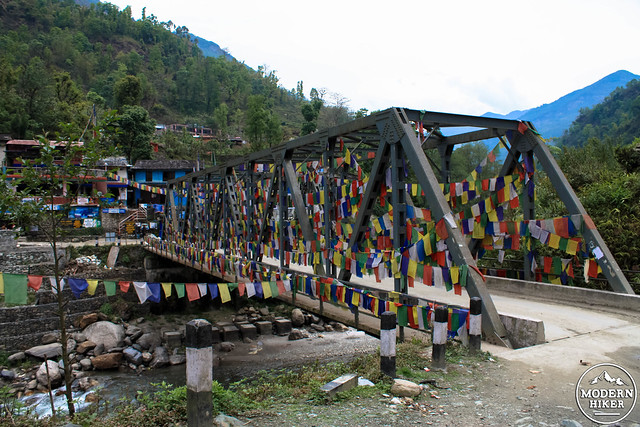 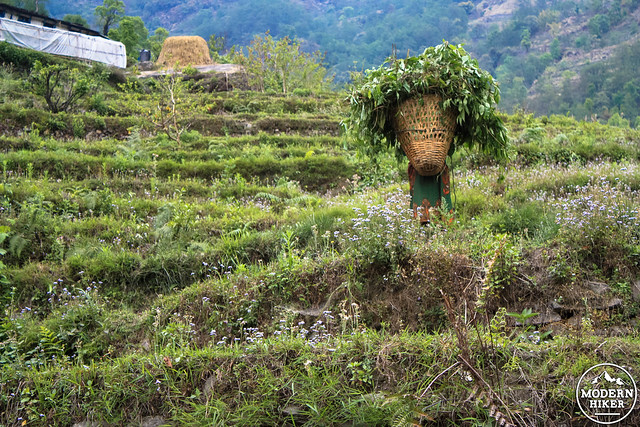 The lower elevation settlements are, as you’d expect, a bit more developed than those further up the mountain. You’ll be hiking along a wide dirt road here but eventually the road ends – rather abruptly – and turns into a trail. You may occasionally have to step aside as a group of trekkers speeds past you in a 4WD vehicle, but after this it’s all on foot for everyone. 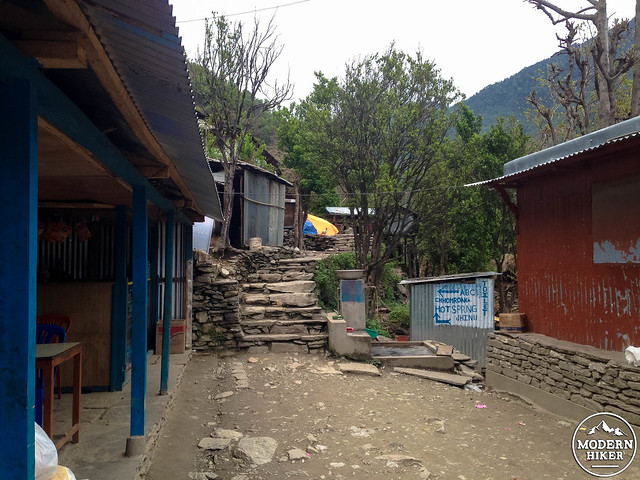 end of the road!

Past this point, the trail gets much more rugged. If you haven’t yet experienced Nepali weather yet, you will – the long, winding canyon you’ll be hiking in for the next week or so basically sucks all the humid moisture up from the lowlands to the Himalaya, where it turns to clouds and is sent back down in thunderstorms and rain. On most days, you’ll probably feel like you’re hiking through four separate seasons in a matter of hours, but as long as you’ve got the right layers on board, you’ll be in good shape. Oh, you’ll also have to occasionally share the trail with some farm animals. 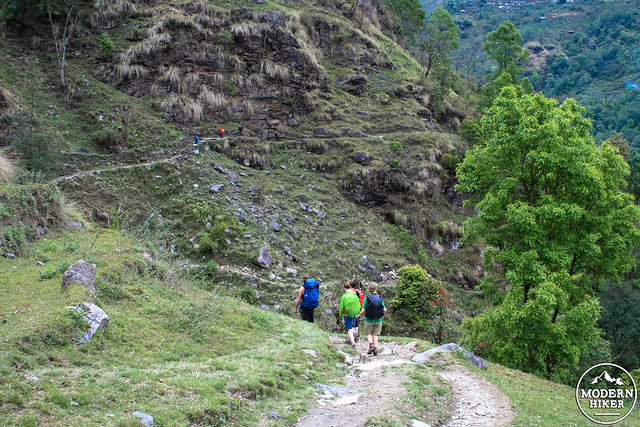 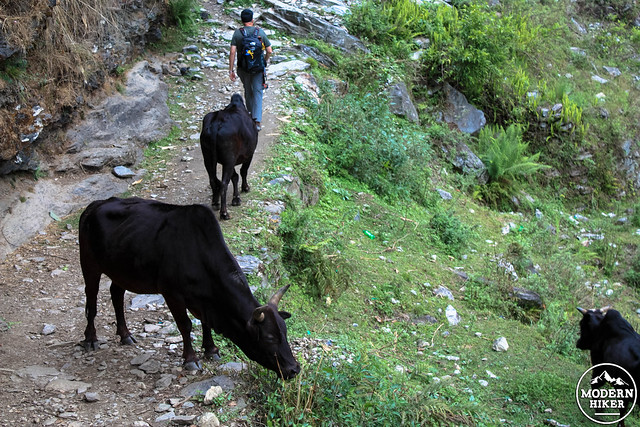 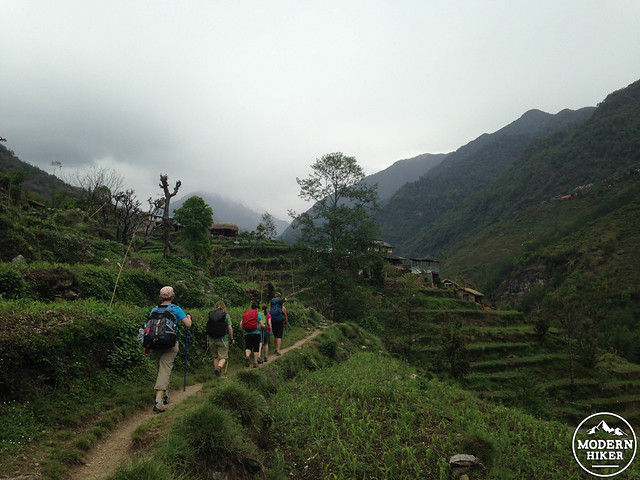 After 7.5 miles of hiking, you’ll make it to the tiny tea house at Kyumi. Near a small spring, a millstone is still used to ground flour, while across the canyon enormous beehives are a source of prized Himalaya honey. You’ll no doubt settle into one of the cozy rooms, swap your boots for a pair of sandals, and enjoy a little reading time on the outdoor patio before the evening’s generous helpings of dal bhat and ginger tea before drifting off to sleep in the shadows of giants. 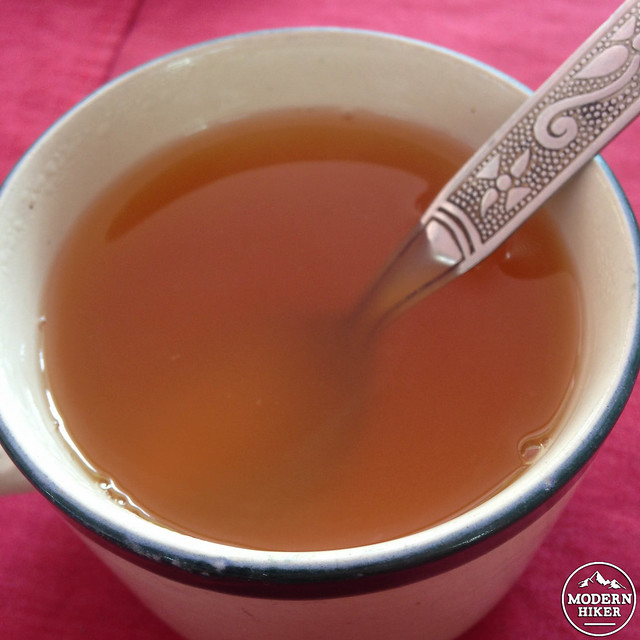 Besides being delicious, ginger tea also helps with digestion and can help with the acclimatization process. Drink lots of this stuff up here!

Part of a series on hiking the Annapurna Base Camp trek in Nepal with Active Adventures.