Nepal – Chocolate Cake in the Himalaya

The fourth in a series on hiking the Annapurna Base Camp trek in Nepal with Active Adventures.

After waking up at Kyumi I learned another lesson about the Annapurna Base Camp Trek — I was going to be eating like a champion here.

The meals along the trek route are all based off the same basic menu – but it’s varied enough and individual tea houses can put their own touches on things so that you’ll never get bored of the food. You could, for instance, just keep ordering dal bhat at every single tea house and still never eat exactly the same meal.

Here at Kyumi, I started off the day with a few cups of hearty homemade chai, a few scrambled eggs with local vegetables, and some Gurung bread with jam and honey – a light, fried piece of morning deliciousness that’s slightly reminiscent of Navajo fry bread. 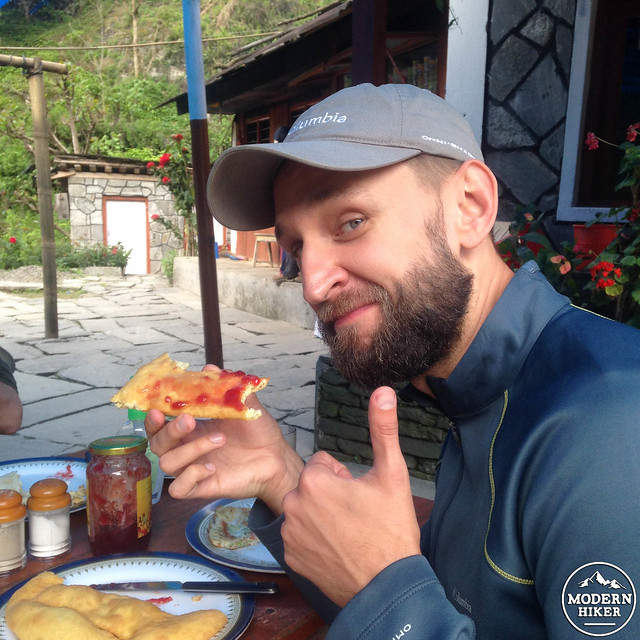 Shortly after downing all those calories, we set out to spend them on the trail. Our goal for the second day was the larger village of Chhomrong, about 5.6 miles further into the canyon and over 3,000 feet above where we started. The trail begins winding through more dense, wet jungle, and while we were hiking it was still incredibly cloudy. We’d spent a few days in Nepal and due to clouds and storms, we’d only seen glimpses of these fabled mountains — but luckily as we were heading north the clouds broke for a while and we were finally able to see the east-west ridge of Annapurna South and Patal Hiunchuli. It was definitely worth the wait. 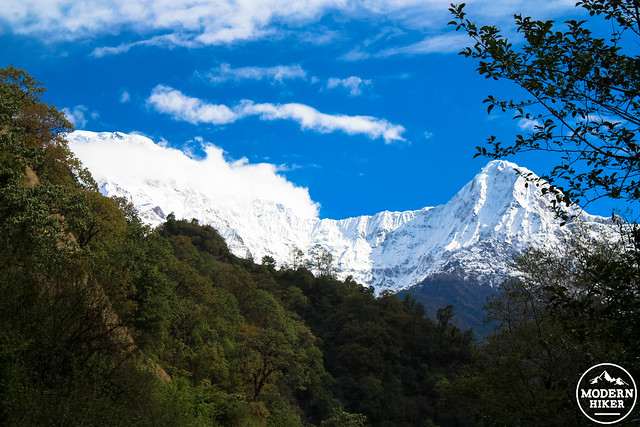 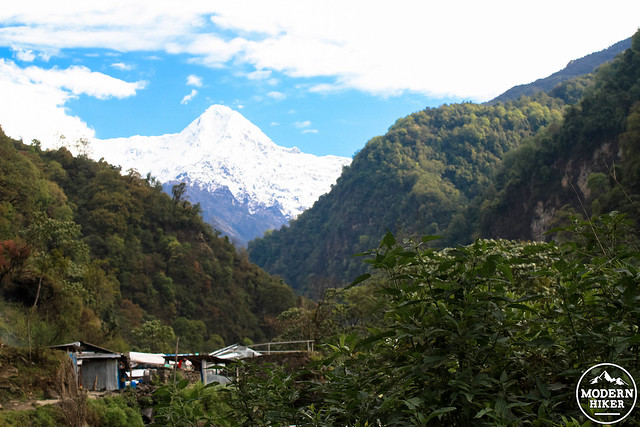 The trail here still follows the roaring, glacially-fed Modi Khola. Its turquoise waters are occasionally visible through the dense forest canopy — not to mention the dense humidity. The hiking here is steady, sweaty, and occasionally very steep. This is when you may first become acquainted with the concept of “Nepali Flats” — basically, even if overall you’re only gaining a small amount of elevation if you look at the heights of your beginning and end points, in between those points you should be prepared to gain and lose a significantly larger amount of elevation. This is especially noticeable when you’re crossing some of the tributary canyons and have to drop all the way down to the water’s edge then climb all the way back up again. It’s OK, though – that’s why you load up on Gurung bread in the mornings! 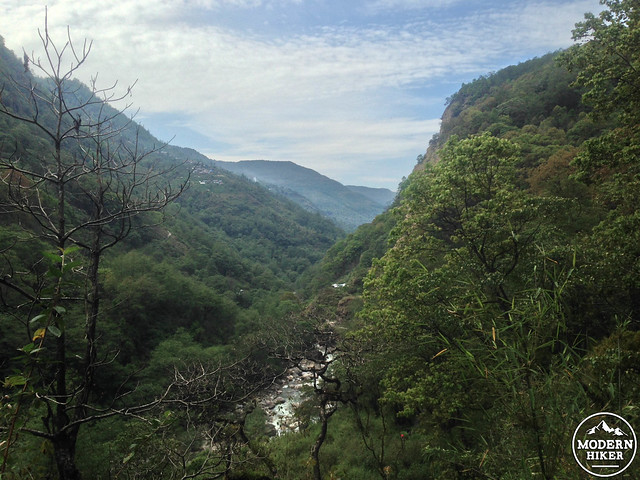 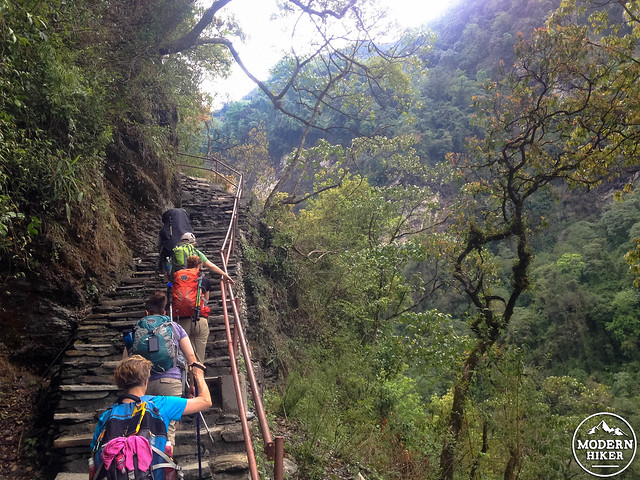 By mid-day you’ll arrive in Chinu, just above the aptly-named New Bridge crossing (which you’ll hike through on your way out). Here, if the clouds are cooperating, you’ll get some more nice views of the snow-capped mountains. 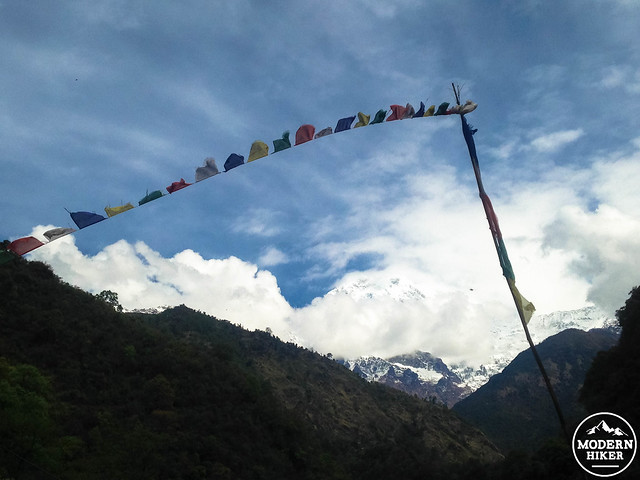 As you take a break here for the ever-present hot ginger tea or “cold lemon” (an iced, extra tart lemonade), you may also start to notice that the Annapurna Base Camp trek is a wonderful place to people-watch.

Travelers from all over the world come to this trail, with a variety of different goals, wishes, and even abilities. But if you’ve never hiked a long distance trail before — something kind of magical starts to happen.

When you realize that all you really have to do is sleep, hike, and eat, all those worries, stresses, and inhibitions from your normal day to day life start to melt away. The effect is more pronounced the longer you’re on the trail … so while on the way up you may be a little surprised to encounter an exuberant Belgian woman who can’t wait to serenade you and your porters with a borrowed ukulele, by the time you’re heading down you’ll likely be the one singing to strangers. 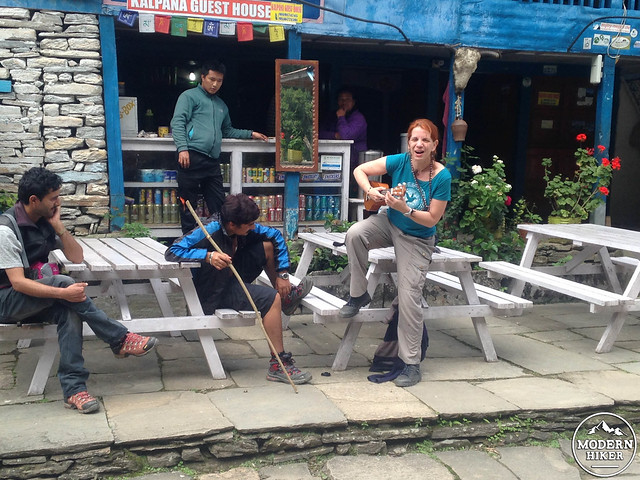 After you’ve taken a nice break, it’s more Nepali Flat hiking to the village of Chhomrong … meaning you’re climbing up a ridge, then down to cross the Kimrung Khola, then all the way back up again to your next tea house. 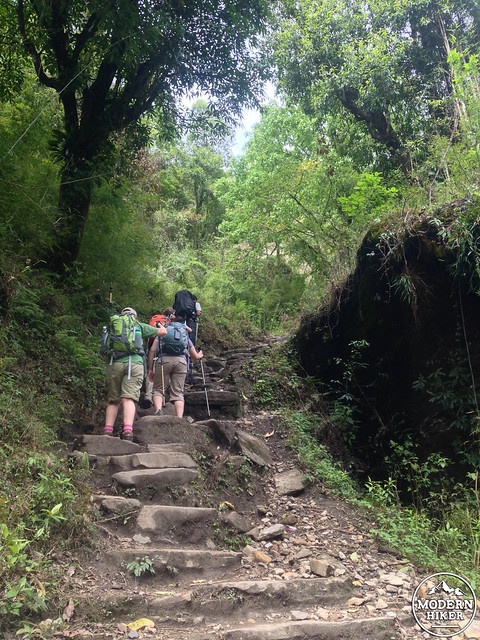 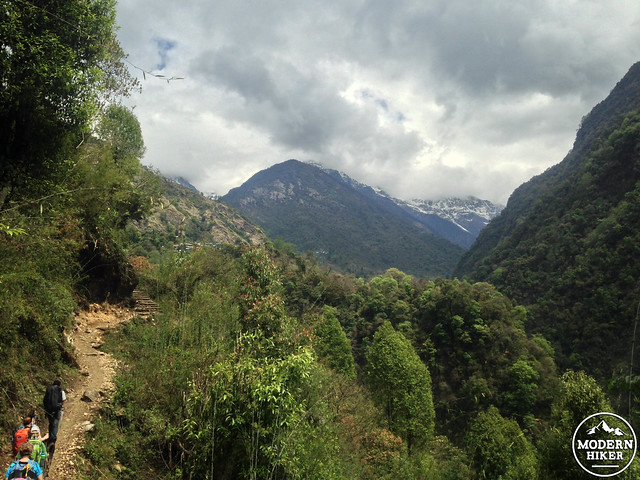 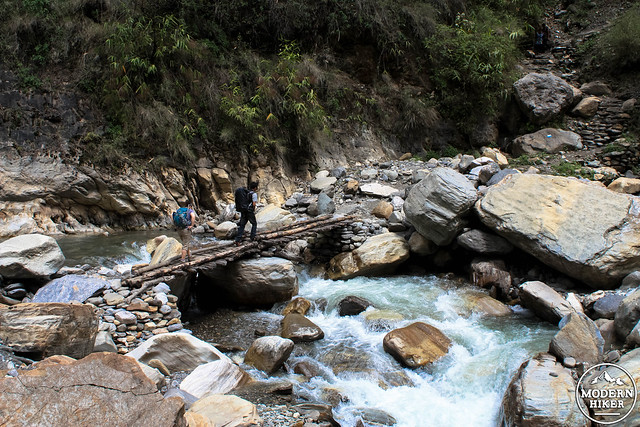 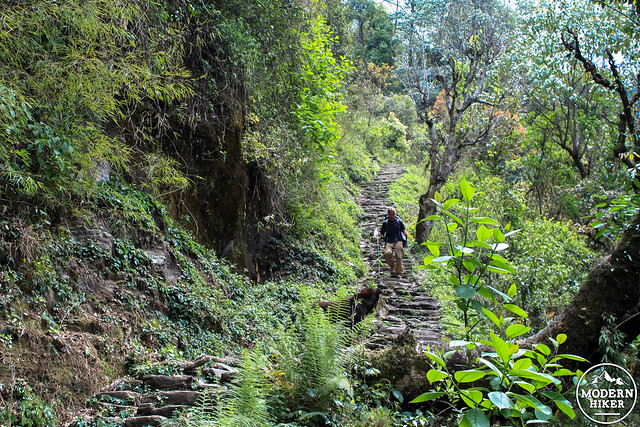 At the village of Chinu (where you’ll stay AND get to soak in hot springs on your return trip), a final steep climb will bring you to the outskirts of Chhomrong, where your tea house’s dining area has a drop-dead gorgeous view of Machhapuchchhre (weather permitting, of course). Even if the fish-tail is obscured by clouds, it’s still tough to beat this scenery: 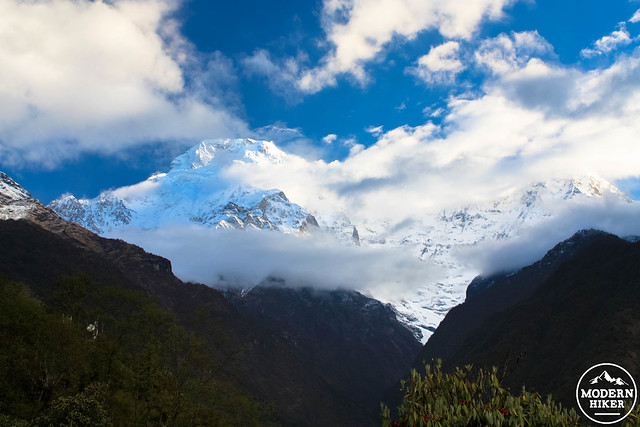 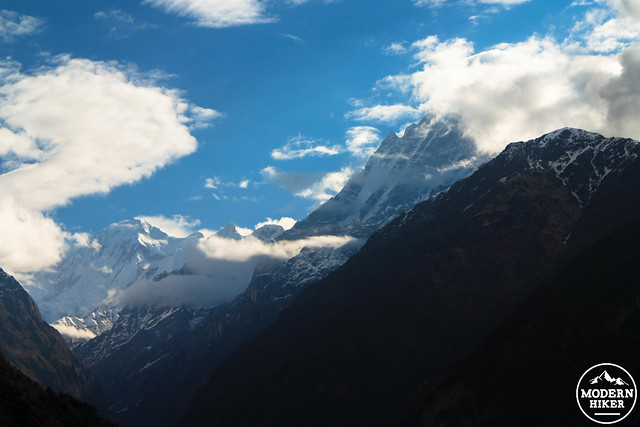 After our group arrived and rested up a bit from all that climbing, a few of us felt like walking a little extra distance to check out the village of Chhomrong. Also, full disclosure – I had heard about some crazy good chocolate cake in that village and I was on the hunt for some sugar. In a bit of culinary strangeness, there are a number of German bakeries in Nepal – and Chhomrong has an unusually high concentration of them. 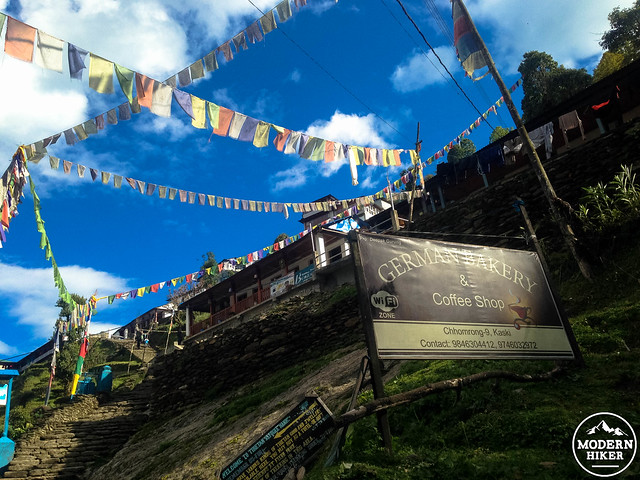 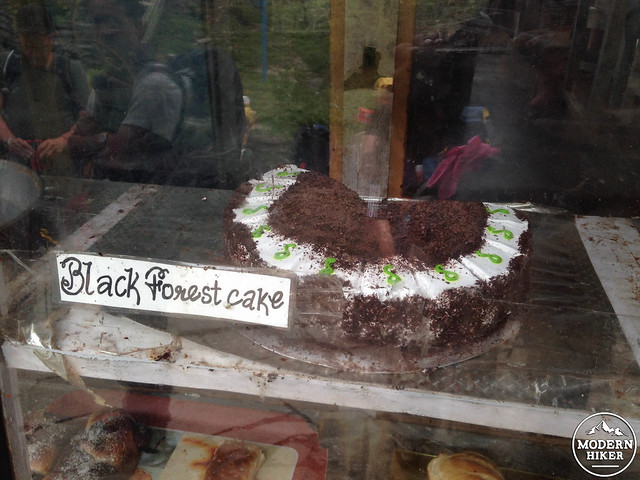 We had to ask around for a bit to find out which one of the tea houses was famous for their chocolate cake when we zeroed in on the Chhomrong Cottage. 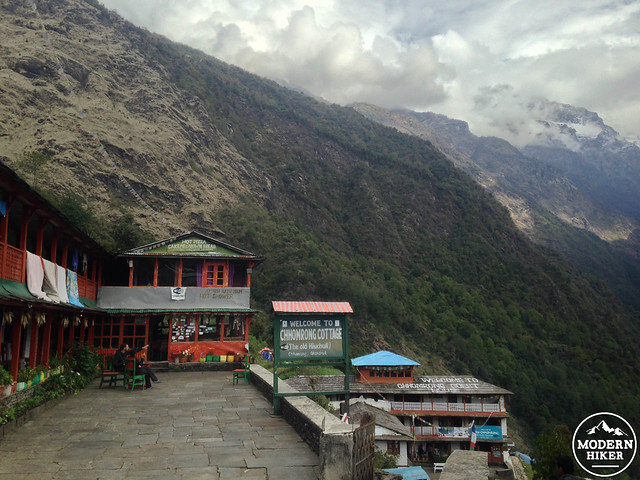 We walked in and found another small group in the otherwise empty dining area. One of them looked up and instinctively asked, “Are you here for the cake?”

Apparently word gets around.

The extremely friendly woman who owns the tea house came out to take our cake order, and when she asked where we were from — in one of the most amazing interactions I’ve ever had — nodded and said matter-of-factly, “Ah yes, America – burrito country!” She went on, saying that whenever she has American guests, they order her burritos nonstop (this was the only tea house where I saw burritos on the menu, and they came in both breakfast and dinner varieties) and never seem to want to try anything else, other than the cake of course.

The cake came out a few minutes later, a small slice of warm, extremely dense deliciousness topped with chocolate custard. 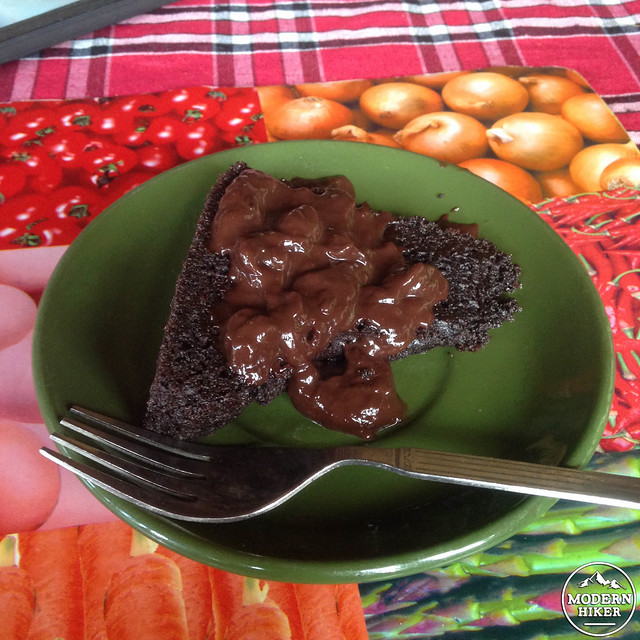 It is probably the best thing I have ever eaten while hiking.