The first in a series on hiking the Annapurna Base Camp trek in Nepal with Active Adventures.

Nepal – for travelers of all kinds, the small Himalayan country usually ends up on a “must do” list of one kind or another. For historians, the oldest country in South Asia has the highest concentration of UNESCO World Heritage sites in the world and the birthplace of Siddhartha Gautama (perhaps better known as the Buddha). For theologians, the nation glows with the vibrant colors, rituals, and energies of Hindu and Buddhist practitioners. For wildlife lovers, it has hundreds of endemic species of plants and animals found from its sweaty jungles to the roof of the world. And for foodies, the country’s unique blend of Indian and Chinese food is often overshadowed by its larger, more well-known neighbors – but has an amazing flavor palate all its own.

For hikers, though, Nepal calls like a siren song – even if you don’t realize it’s singing. With 8 of the highest 14 mountains in the world and nearly 1/5th of its land protected as a National Park or wildlife preserve, Nepal has been a destination for adventurers since it opened its borders to the outside world in 1950. Naturally, then, I was thrilled when Active Adventures invited me to join them on a trekking trip in April, although at the time I didn’t really know what to expect since I’d assumed it was going to be a very long time before I was able to take a trip to this part of the world.

After a long series of flights from L.A. to Guangzhou to Kathmandu, I arrived at the diminutive brick Tribhuvan International Airport. I filed off the plane and into the building, where all the travelers were quickly directed into a very easy tourist visa line (you’ll have to pay when you arrive – they prefer outside cash) and stepped outside into the parking area. 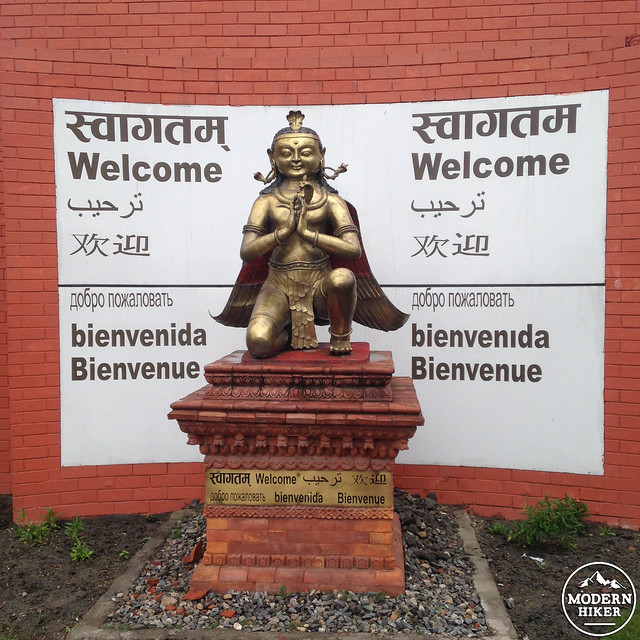 I had to fight my way through some extremely enthusiastic luggage porters who were basically just trying to grab any tourist’s luggage to take to a taxi for a cash tip, but once I got into the van sent by the Active team we left the airport and made our way into Kathmandu. 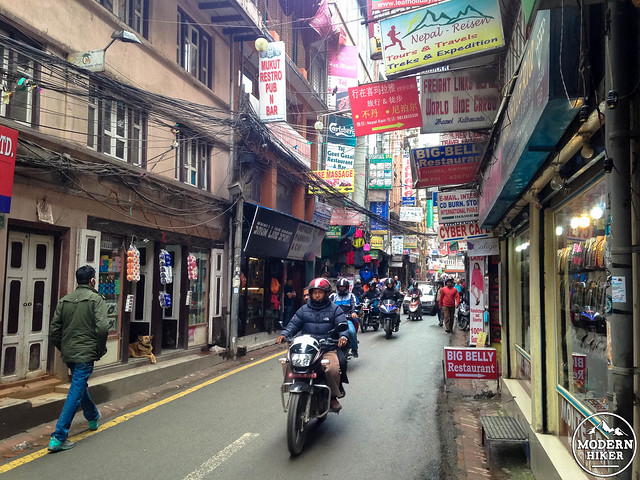 So here’s the thing – I love the outdoors, but unlike a lot of outdoorsy types, I also love cities (as long as I can get out of them to snag some of that nature time!). Driving through the city’s narrow, dusty streets was an incredible experience and an unforgettable introduction to Kathmandu. Other people who I talked to later were sort of taken aback by this introduction, but I found the city’s bustle and energy completely infectious and I couldn’t wait to get out and experience it firsthand.

Kathmandu is a really fascinating mix of old and new – the airport is just a stone’s throw away from Pashupatinath Temple – an ancient holy Hindu site where families still cremate their dead loved ones in the open air. Electric wires and neon signs crowd the skies above the sometimes-paved streets, but country is still subject to nationwide rolling blackouts despite having massive hydroelectric capabilities. Mopeds with unregulated exhausts are driven by slick-dressed young people with cell phones while open-air butchers hawk their wares out of ancient brick buildings. Everywhere you look, something is going on. It’s either going to make you want to get out and join them or run to your room until you can get on a trail.

So, when I arrived, I threw down my bags at the Thamel Eco Resort and hit the streets of the neighborhood. 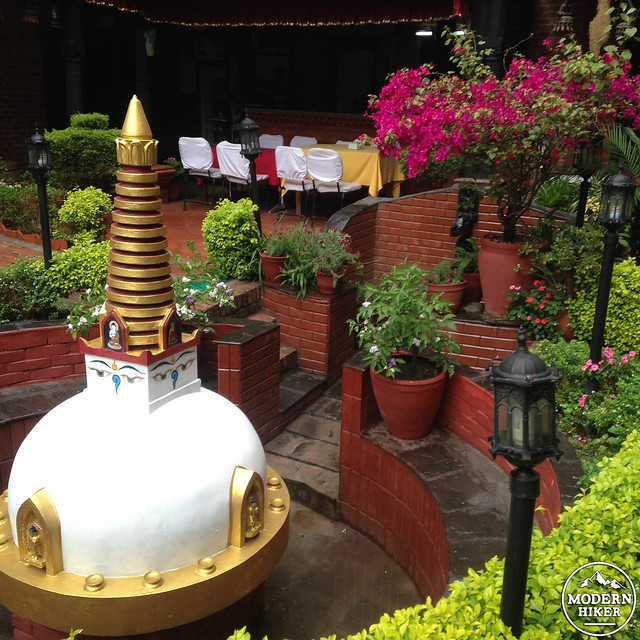 the peaceful open courtyard of the Eco Resort

The Resort is tucked back from the main streets of Thamel at the end of a long alleyway, and is actually surprisingly quiet and calm compared to the rest of the neighborhood. When you hit the street, there will be throngs of people competing with vehicles on narrow streets. Citizens walk clockwise around ancient shrines and ring their bells while haphazardly-stacked businesses clamor for your attention – street food, local guides, artisan-knit crafts, and outdoor gear of questionable authenticity are all there – sometimes in the same building. (Pro tip: if you need one or two gear items and aren’t super picky about factory guarantees, you might consider waiting until you get to Kathmandu. I forgot a rain cover for my backpack and was able to pick one up for under $5, which would cost me at least five times that amount in the States). 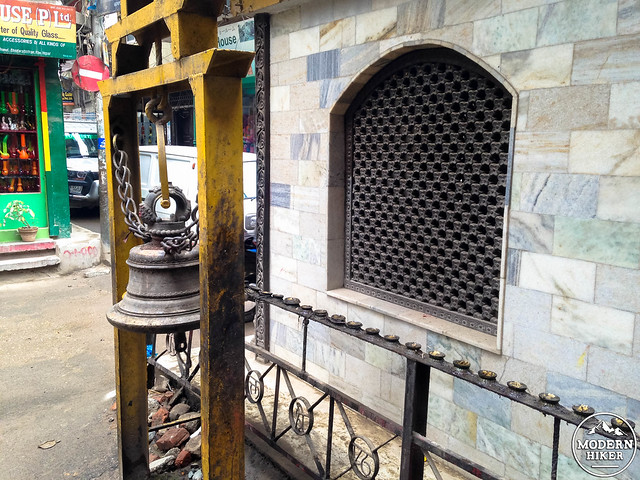 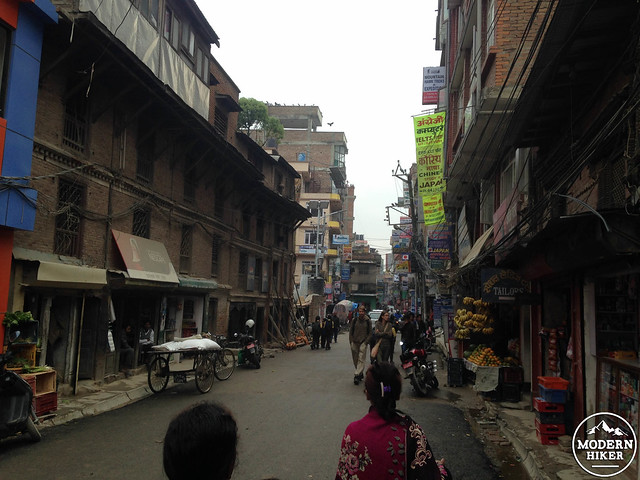 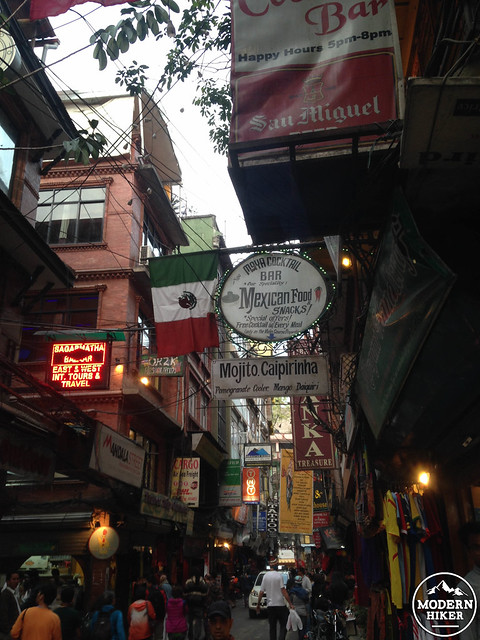 Sadly, I did not get to sample the Nepali take on Mexican food

In addition to having the potential to be a sensory overload, walking around Kathmandu on foot can also be a pretty disorienting experience. The street grid is nonexistent – Kathmandu was founded sometime in the 900s BCE, long before the advent of urban planning. Streets bend at odd angles, meet multiple other streets at even odder angles, and alleyways branch off from the main roads in every direction possible. Because the angles are sharp and the buildings are tall enough to block out any of the surrounding landscape, you can pretty much only see exactly where you’re standing. Again, you’ll either find that fun or terrifying.

All of the Active trips in Nepal start off with a low-key zero day to allow everyone to get in from the airport and settle into their new surroundings. Eventually, our entire group arrived, and the seven of us joined our two trip leaders – DK from New Zealand and Gokul from Nepal – on a rooftop for our first taste of Nepali food. It was a great, low-key way to meet our traveling companions for the next two weeks and to get our first taste (of many) of dal bhat, the unofficial national dish of Nepal. 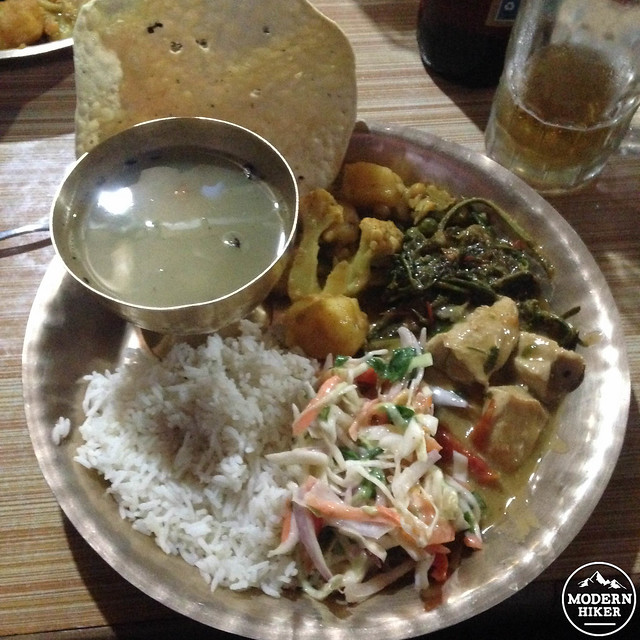 A mix of rice, lentils, vegetables, and spices, the recipe for dal bhat varies wildly, and often changes from village to village or even family to family. It is also delicious and – as I would later learn – also excellent hiking fuel.