A few weeks ago, the team at Raleigh contacted me to see if I would be willing to give a new bicycle a few fair shakes around the city of Los Angeles.

I really try to leave my car at home as much as possible. Partially because street parking in my neighborhood is kind of a nightmare, but also partially because in many ways it’s not only faster to get around the city by bike — but also more fun. I used to commute by bike to offices regularly, and even did cross-town commutes from the Fairfax District down to Santa Monica and back. Add a bit of Metro in on especially hot days (or days when you just want to chill out with a book or podcast) and those rage-inducing drives to work can become bonus exercise that also focuses the mind and gets you ready to roll on projects as soon as you sit down at your desk.

These days, I do most of my work from the Modern Hiker HQ, which means there isn’t quite as much long distance bike travel these days, but I still do prefer two wheels to four when I’m running errands (pro tip: bike parking at Trader Joe’s is MUCH easier than car parking) … and the old hybrid commuter bike I had been using was definitely starting to look a little long in the tooth — especially after its mid-sized tires kept getting punctured by debris on the L.A. city streets.

So I recently took the Expo Line down to Raleigh’s new flagship storefront in Santa Monica to meet my new, tastefully orange Merit 2. After a few quick adjustments from the in-store staff and a short ride around the block to check the frame height, I was off! 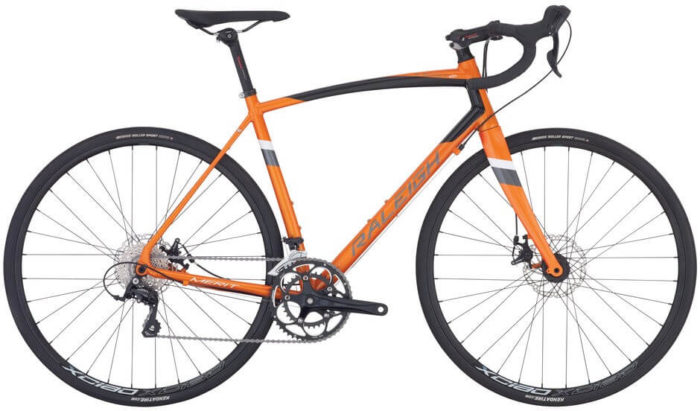 From there, it was up Santa Monica’s bike lanes (thanks, Santa Monica!) to the recently-partially completed Expo Bike Path, which runs mostly alongside the western portion of the Expo Line from Culver City to downtown Santa Monica.

The bike path has come under criticism for sort of squandering a major opportunity to build a completely protected lane for cyclists, and rightly so. NIMBYism, budget cuts, and odd construction choices have the path stopping and starting in certain neighborhoods and taking extremely sharp turns with limited visibility on other parts of the path. But overall, the route is a welcome addition and traveling on it was extremely pleasant.

While my previous bike was a bit on the heavy side, I can lift up the Merit with two fingers — meaning this new bike was exceptionally quick on the start and kept up speed even on the uphills — a very welcome change of pace from my previous model. The disc brakes and handlebars took a bit to get used to, as was the more sensitive nature of a light-framed road bike, but the journey along the bike path was nice and easy … and even somewhat fragrant since Metro has planted a bunch of California native plants along the pathway. 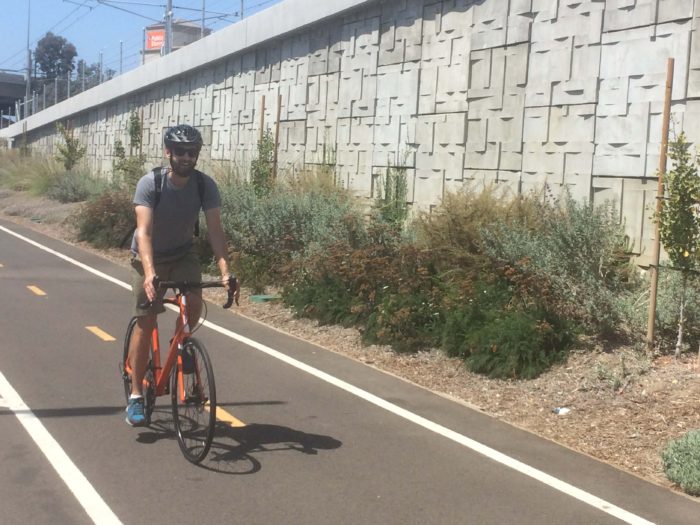 After the bike path abruptly ends (oh, the joys of biking in Los Angeles), it was back to the hodgepodge of city streets in varying states of decay. There is a very noticeable shortage of decent north-south biking routes in this part of town, so it was bobbing and weaving through side streets and crossing major arteries without the aid of traffic lights for us. Thankfully, that lightweight quick-start came in mighty handy while crossing those big 6-lane mini-freeways during quick breaks in the traffic.

I’m looking forward to giving this bike a good test run in better cycling conditions over the next few weeks — and I’ll be taking it up into Griffith Park for a full loop around Vista de Valle Drive and trying out the San Gabriel River Bike Path from the foothills of the San Gabriel Mountains down to Seal Beach (which is, incidentally, one of the regions legislators are trying to include in a new San Gabriel Mountains National Recreation Area). I’ll have another update after those rides (and will likely be posting some photos from them on the Modern Hiker Instagram account, too!)

Raleigh provided the Merit 2 to Modern Hiker free of cost. Modern Hiker did not receive compensation for this post nor did Raleigh exercise editorial control over its content.