Los Angeles State Historic Park is About to Re-Open

In 2012, the city of Los Angeles trumpeted the opening of Grand Park. In the midst of downtown, the 12 acre park was a desperately-needed new public space and since its opening has become a popular destination and event location … but there still seems to be something a bit lacking there. Maybe it’s the heavily-manicured terraces or the fact that Hill Street and Broadway divide the park into three separate spaces and ensure that auto traffic is always within eyesight, but whenever I visit it I always get the feeling that we just missed building a park worthy of the name ‘grand’ there.

Now, though, with a more naturalistic feel and wider open spaces, the newly renovated Los Angeles State Historic Park just might be the urban park we were waiting for.

The 32 acre park just to the northeast of Chinatown is hemmed in by Spring Street on the east and the Metro Gold Line tracks on the west, and the park’s southern entrance is just steps away from the Chinatown Gold Line stop. It’s surrounded by historic bridges, the Los Angeles River, and the shadow of Dodger Stadium, while the ever-expanding skyscrapers of downtown stand on the horizon to the southwest.

Closed to visitors since 2014, Modern Hiker got a sneak preview a week before the park’s grand re-opening to the public on Earth Day, 2017.

Coming in from the Gold Line stop, visitors will first be greeted by wide open sidewalks accented by pavers and cobblestones from the area’s many former uses. 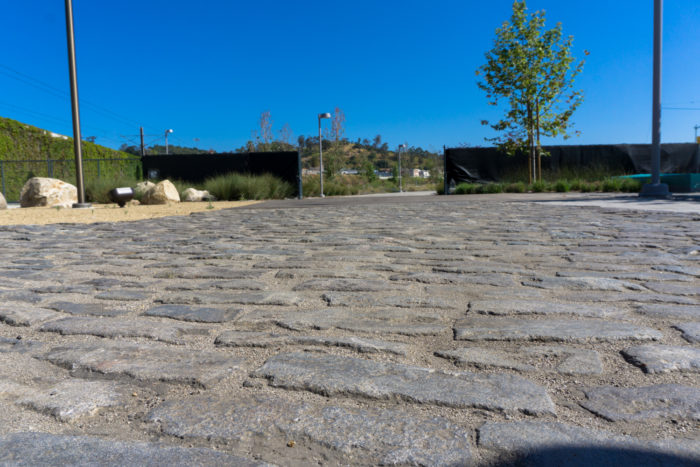 This first phase of the park’s reconstruction and renovation pays tremendous homage to the history of this parcel of land, which in many ways tells the story of Los Angeles itself. The pavers are from the site’s former primary use as a million square foot rail yard. In 1876, Southern Pacific built a passenger depot here, which was the main railway port-of-entry for many people who moved to the Los Angeles area during the land boom of the late 1800s. Two different passenger depots were active through 1901 (the first wooden structure burned down in 1887 and was replaced by a brick version).

By Not given – http://photos.lapl.org/carlweb/jsp/DoSearch?databaseID=968&index=w&terms=00046633, Public Domain, Link

For more photos and great stories about the grand rail depots that L.A. used to have, be sure to check out this awesome L.A. As Subject piece.

The Park will have installations by artists telling the story of the land, but even though they weren’t yet in when I visited, you can see the park takes special care to tell its history in the landscaping and design. A central pavilion and natural amphitheater sit directly atop the rail yard’s historic roundhouse (which at some point may even be excavated), an elegant bridge provides great views of the region while referencing the nearby overpasses and bridges still used by Metro trains and automobiles today … and keen eyes may still be able to spot long-rusted rail ties scattered throughout the park. 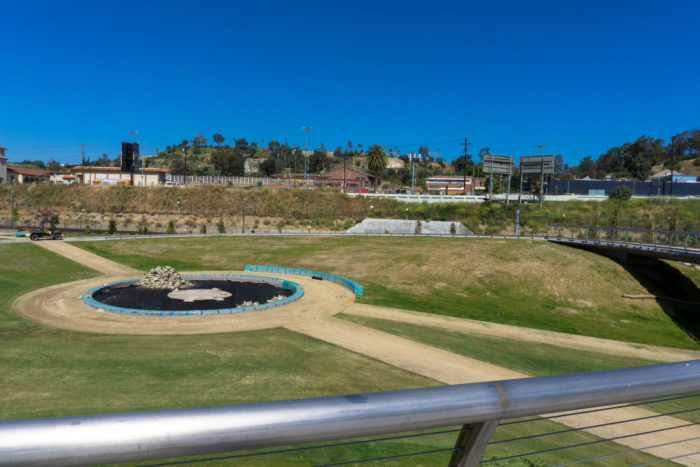 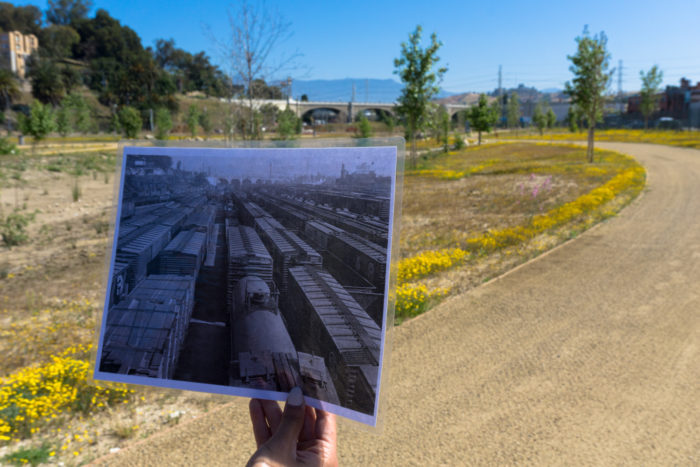 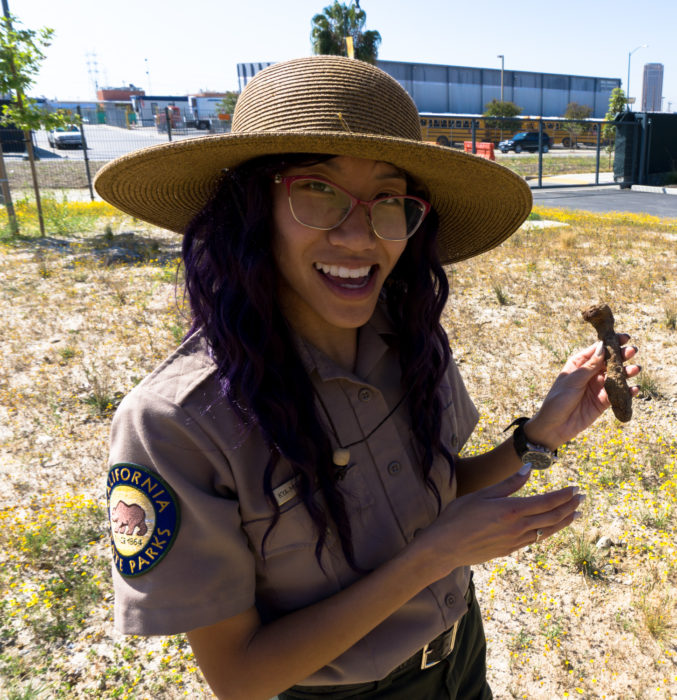 railroad ties on display – you should probably leave these alone if you find them.

After the passenger depots left, this area became an industrial rail yard until it was decommissioned in the 1980s. In 2001 it was purchased for a planned urban park, and after much cleanup an ‘interim’ park opened up in the mid 2000’s — many fondly remember the temporary project “Not a Cornfield,” which gave the park its unofficial name for many years thereafter.

Beyond the railyard history, the open spaces and native and drought tolerant landscaping are also worth noting — in addition to the plentiful lawn space for picnics and strolling, the park also features large swaths of native wildflower meadows — still in bloom when I visited — along with a system of bioswales and even an area rangers refer to as “the wetlands,” which they assured me was actually filled with water after our recent rains. 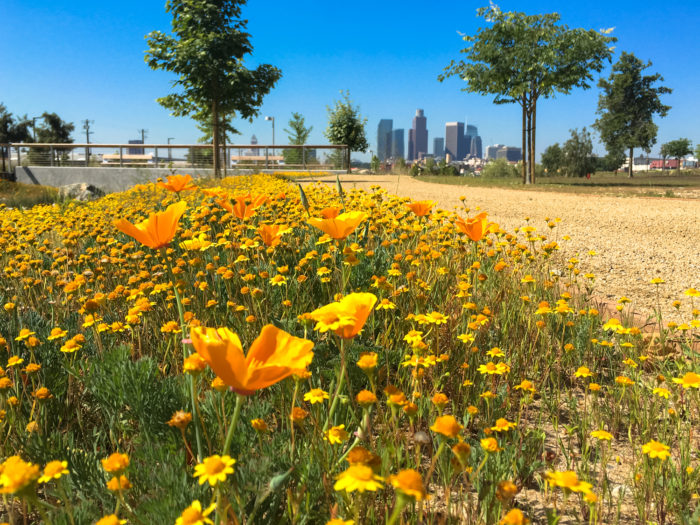 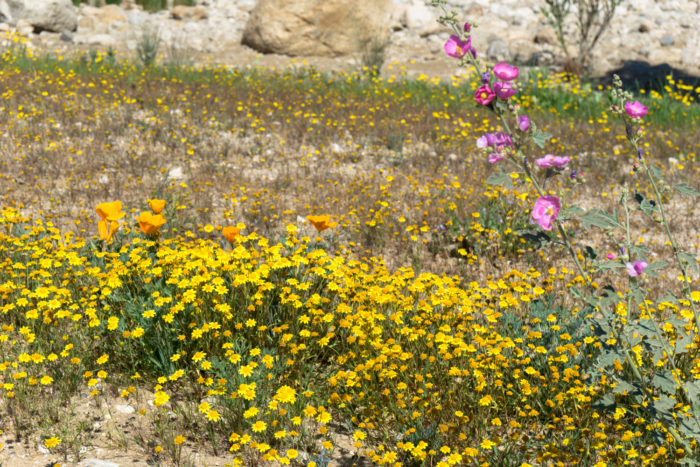 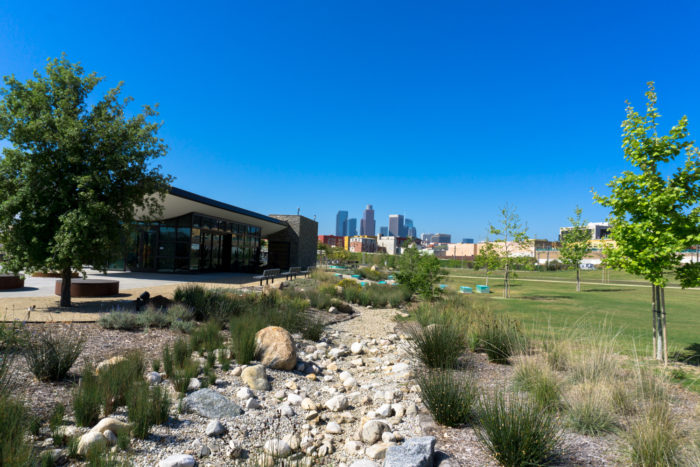 It’s not all natives and drought-tolerants, though — in homage to Southern California’s agricultural past, the group Fallen Fruit tends to an orchard of Valencia oranges in the park as part of its “Endless Orchard” project. Visitors can, indeed, snag an orange to juice at home if they want — and there are also pomegranate and olive trees in the park as well. 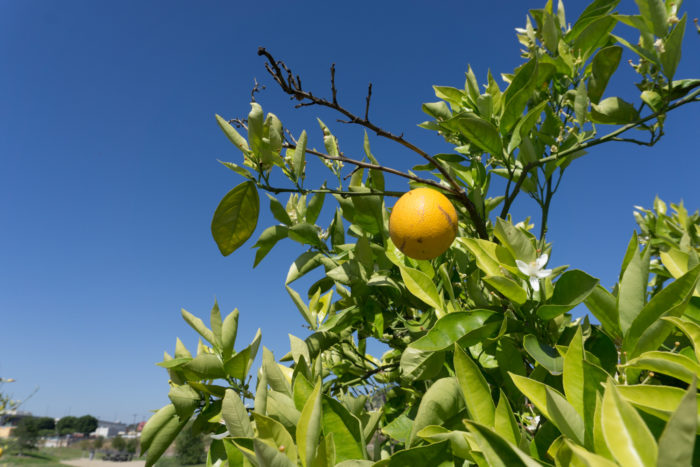 The new park buildings — a ranger station and an interactive media lab — take architectural cues from the Chinatown neighborhood while also providing lots of open access to the park. 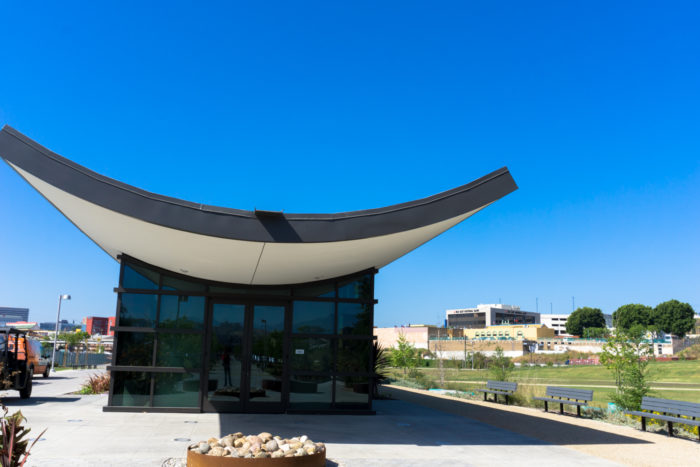 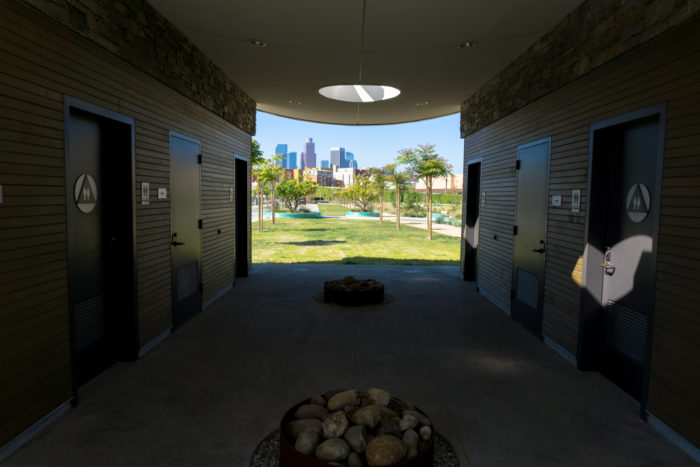 On the western edge of the park, visitors can also see a part of even earlier L.A. history – the Zanja Madre: 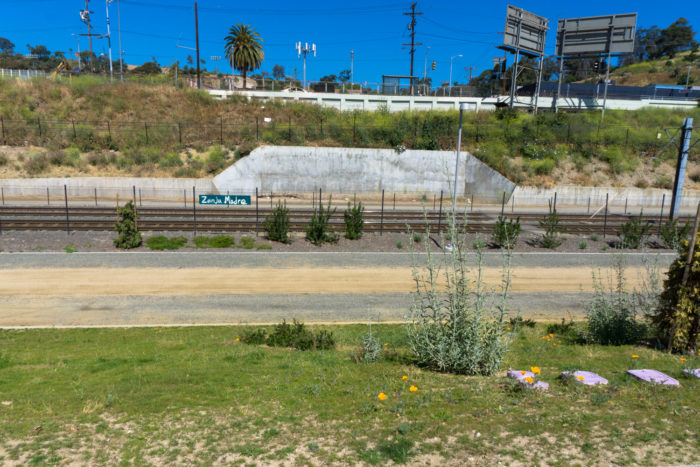 The Zanja Madre (Mother Ditch) was the first aqueduct for the Pueblo of Los Angeles. The original open-air system was built shortly after the Pueblo’s founding in 1781. Over time, portions of the sprawling system were improved as enclosed brick systems or underground pipes, but most were lost to development and history. In recent times, though, archeologists have made some happy discoveries of the Zanja. A section was found near a parking garage on Broadway in 2000; in 2005 this section was uncovered by MTA construction crews building the Gold Line tracks (it was long assumed any existing relics of the Zanja would have been destroyed by the enormous railyard that was here before); and in 2014 a section was uncovered near the Blossom Plaza development near the Chinatown Gold Line station.

In the future, the park will have an onsite restaurant and beer garden called Cargo, as well as rotating art installations. There are also plans to extend the circular bridge across the Metro tracks to provide access from Broadway, as well as working with the city to make the roadways surrounding the park a bit more pedestrian-friendly — which will be important as new residential and commercial developments move into the now-mostly-still-industrial neighborhood. The park is a trailhead for UCLA’s Trail City LA project and there are hopes to connect this park to the nearby Rio de Los Angeles State Park and El Pueblo de Los Angeles Historical Monument, as well as expand renovations to its northern reaches near the Broadway Viaduct, which will remain an active part of the park for screenings and performances. 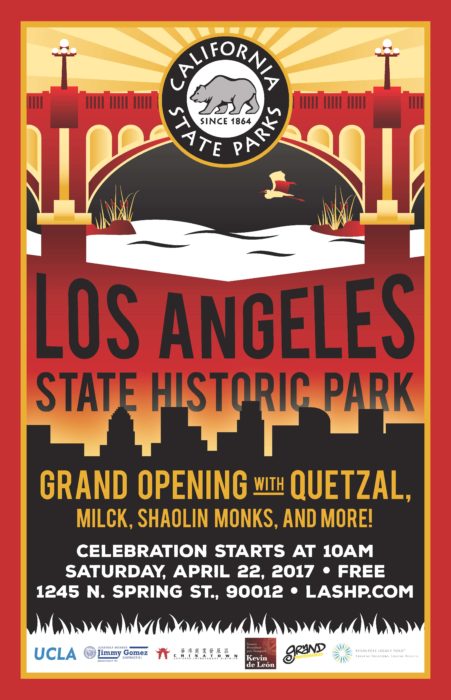 Modern Hiker will be present at the Grand Opening from 10AM through about 4PM. Meet Founder and Editor Casey Schreiner and pick up an autographed copy of his book “Day Hiking Los Angeles.”