Anyone who’s hiked the very popular Runyon Canyon Trail has probably had some questions in their head once they reach the ridge and see a giant unfinished beige mansion straddling the trail. The LA Times posted a story on the property today, which has had more than its fair share of bad luck. Originally built 16 years ago, the 9,800 square foot mansion was never finished. It includes five bedrooms, seven bathrooms, a 200-bottle wine cellar, six-car garage, jacuzzi and years of history as a crack house and Satanist altar.

Now the unfinished house is up for sale for $15.2 million. The house itself isn’t the main draw here, though – the existing structure isn’t up to code and will most likely have to be demolished or heavily reconstructed before someone can move in. The real deal here is the land involved – 22 acres of undeveloped canyonland in the heart of Hollywood, which the property listing says is ripe for “all sorts of subdivision possibilities.” 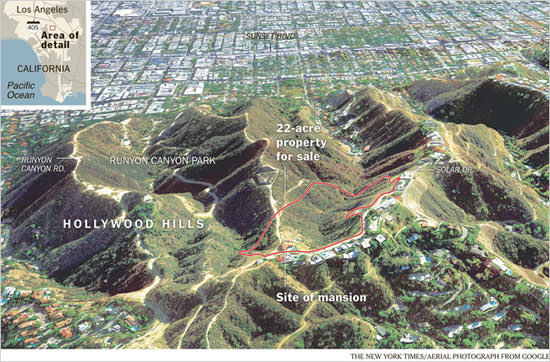 As you can tell from the picture, the for-sale property actually includes areas that are already trekked in by Runyon hikers – as well as a huge chunk of the unoccupied canyon to its west.

While the President of the Upper Nichols Canyon Neighborhood Association scoffed at conservationist concerns, I hope some of our local environmental groups can get on the ball with this and try to raise some money to buy or subdivide the property for the Santa Monica Mountains National Recreation Area and Runyon Canyon Park. A few years ago, the Mountains Recreation and Conservation Authority began a (to my knowledge) ongoing effort to preserve six lots on Mullholland and Laurel Canyon.

While that land seems to have been tied up in legal struggles, I would be willing to bet that land inside Runyon Canyon itself would garner significantly more attention from local hikers and conservationists alike. This last shred of undeveloped land in the Santa Monica Mountains is too important to lose to more Hollywood Hills mansions.