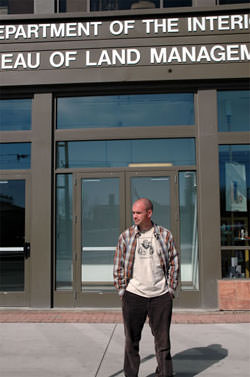 In 2008, when the George W. Bush administration was on its way out the door, it decided to launch one final giveaway to oil and gas companies by leasing hundreds of thousands of acres of land in Utah overseen by the Bureau of Land Management. Frustrated opponents protested outside the BLM building in Salt Lake City while the auction was being held in December of ’08, but Tim DeChristopher, a 27 year old University of Utah economics student, took action.

DeChristopher went into the auction as a bidder, and despite not having any money, successfully bid on 148,598 acres of land for over $7 million. When he wasn’t able to win a bid, he was able to drive up the costs of leases for oil and gas companies. By the time the paperwork was done on the land DeChristopher successfully bid on, a new administration was in office – one that agreed most of the land up for sale should never have been put up for auction in the first place.

DeChristopher knew he would be charged and already admitted he knew what he was doing. Yesterday he was found guilty of disrupting public business, causing “financial harm” to the government and to private interests, and for interfering with a public land auction. He faces up to $750,000 in fines and 10 years in prison, although it’s unlikely he will be hit with the maximum punishments.

Sentencing is set for next week, but after the verdict was read a defiant DeChristopher gave this rousing speech outside the courthouse:

Personally, I think we could use more principled activists like Tim. Of course he was upset that BLM land was going up for lease near National Parks and archeological sites, but he was more upset that the land was being put up for auction with almost no notice or oversight. And in this case, he was right – many of the leases put up for bid were declared invalid and improper by the Obama administration.

Here’s hoping the judge deciding the sentencing provides a bit of common-sense clemency.