Is the L.A. River Inner Tube Race a Bad Idea?

The following piece is an op-ed contribution.

Squarely in the tradition of creative Angelenos using attention-grabbing approaches toward reclaiming the Los Angeles River, Kurt Braunohler and Lauren Cook recently launched L.A.zy River, an inner tube race to take place on the first weekend after a major rainfall.

Tubing on the L.A. River? If all you know of the L.A. River is its starring role as a constant dystopian wasteland in film, you may be surprised to learn that many parts of the River are actually quite lovely places to recreate these days.

The lower L.A. River, especially, is a treasured recreational resource. Local advocates and politicians have worked together to reopen sections of the rivers for boaters the past few summers, including near the Sepulveda Basin and Glendale Narrows. Hard-fought legal battles with the Army Corps of Engineers premised on the navigability of the L.A. River were necessary to ensure that the strongest protections of the Clean Water Act would apply here. This is our river, and we can boat it if we want to. 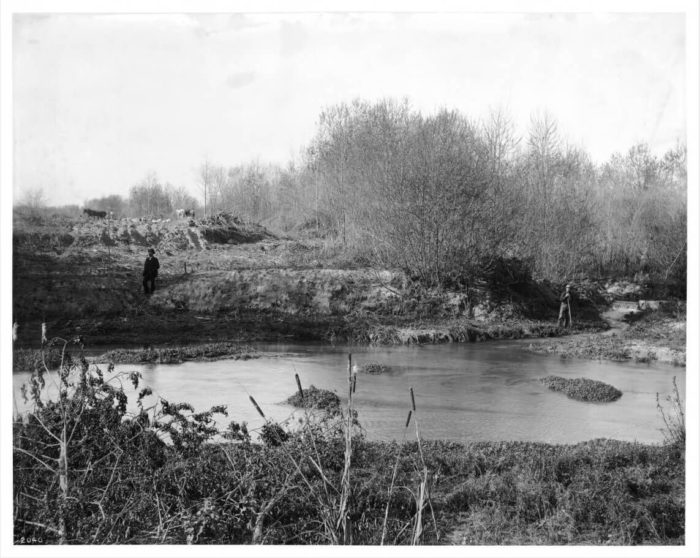 The un-channeled Los Angeles River, 1895-1898. Digitally reproduced by the USC Digital Library from the California Historical Society Collection at the University of Southern California.

But tubing on the L.A. River (or any river in SoCal) right after a major storm? That is a terrible idea! Dangerous, in fact. It seems that this drought (and our enthusiasm for its hopeful end) has made us forget that Southern California experiences some of the most intense rain storms in the country, and that our rivers go from meager trickles to raging torrents in no time at all.

Those giant concrete channels surrounding the L.A. River may seem like overkill now when the flow is but a trickle, but after an El Niño storm their role in flood protection couldn’t be clearer. Every winter, a few people get swept up in the flow, requiring “swift-water” rescue operations, and the outcomes are sometimes tragic. 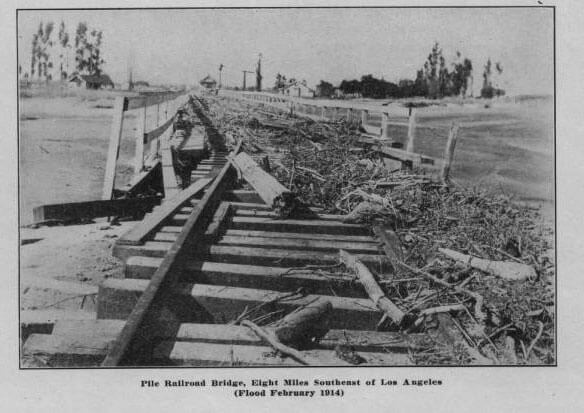 A destroyed railroad bridge from a flooded Los Angeles River, 1914. Image digitally reproduced by the USC Digital Library from the Historical Society Collection at the University of Southern California. 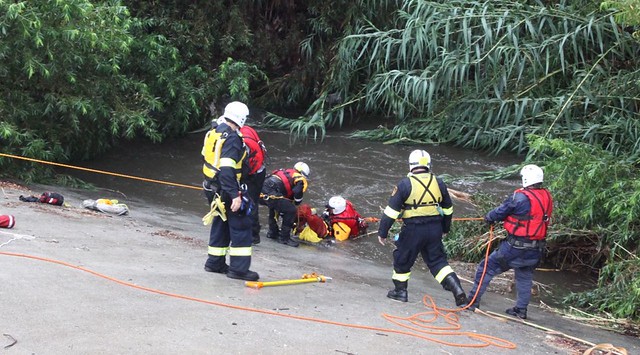 It’s sad when the victims are homeless inhabitants of the channelized river basin, but it’s dumb-founding when they are people who deliberately put themselves in danger. And those rescues are expensive, both in terms of money (approximately $10K per rescue), and the strain on resources to deal with other, less preventable emergencies.

If the floodwaters don’t drown you or bash your bones against a bridge abutment, the water quality might get you later. During the dry season, the Los Angeles River contains mostly treated wastewater from a number of treatment plants. This treated wastewater is pretty darned clean—well-nigh drinkable, in fact. But right after a storm? That’s stormwater. It’s pretty dirty, and (especially in big storms), it’s untreated. All that dog poop on your neighbor’s lawn ends up in the river, along with all the other crud we dump on our streets. Motor oil, dust from brake pads, pesticides and compost from our gardens all end up in the river.

In the first few hours following a storm, pollutants like bacteria, metals, and a variety of toxic compounds reach their peak levels in the water — and these levels may remain high for several days. This is not just a problem for the L.A, River, but for the beaches as well. High rates of gastroenteritis afflict surfers who ignore beach closures and hit the waves in the first few days after a storm. Other common illnesses associated with swimming in polluted water include hepatitis, respiratory infections, salmonellosis, and shigellosis. Yikes! (To find out more about what surfers and other doing to protect our health, check out surfrider.org.)

So, please, enjoy the L.A. River but do it safely. During dry weather, go kayaking or maybe even take a swim in the great swimming holes in the San Gabriels (like Eaton Canyon, Bear Canyon, or Sturtevant Falls). Shortly after a rain, a riverside walk is particularly enjoyable, as it allows you to witness the hidden power of our waterways California’s rivers are veritable sleeping giants, and seeing them in action is always memorable. There are some wonderful hikes in the Big Tujunga Canyon — or even visit the new L.A. River Center near downtown.

And at all times of year, be a forceful advocate for the L.A. River, like the folks behind L.A.zy River. But please keep safe!