Is the Adventure Pass Dead?

It appears the ongoing saga of the Adventure Pass program – a system of use-fees on Southern California’s National Forest lands continues. Last week, U.S. District Court Judge Terry Hatter Jr. issued a ruling that dealt another major blow to the program and seemed to make it much more difficult for the Forest Service to collect Adventure Pass fees.

Over the past few days, I’ve seen a lot of reactions to this ruling – ranging from anti-government glee to disbelief that the cash-strapped Forest Service was taking yet another hit. What I haven’t seen is any sort of attempt to actually explain what’s going on and what it means.

I spent the past few hours going over some Forest Service documents and reading a lot of history on the issue. My gut reaction to the news changed the more I learned, and I hope this is at least helpful to people who are just wondering what the heck is going on.

As always, I encourage and welcome other viewpoints and information – so please let me know how you feel about the issue in the comments. I know some Forest Service volunteers and employees read the site and would love to hear what they think if they feel comfortable sharing.

THE PAST IS IN THE PRESENT

The Adventure Pass has been around since 2004 but has come under heavy attack in recent years. In 2012, a federal judge ruled in favor of Arizona hikers who said they shouldn’t have to pay a similar day-use fee on National Forest land if they weren’t using the developed improvements. That same year, the 9th Circuit ruled that the decision also applied to California’s National Forests that use the Adventure Pass program – the Los Padres, Cleveland, San Bernardino, and Angeles National Forests. The Forests responded by drastically reducing the areas where fees would be collected.

Whereas previously Forest Service rangers could charge you the Adventure Pass if you parked at a developed site, the new ruling says that they can no longer do that unless you actually use the area’s improvements. The attorney for the plaintiffs suggested that rangers could differentiate between the users by establishing separate parking areas, opening up more roadside parking areas near trailheads, or by eliminating the requirement for a pass where there are less developed facilities.

The primary motivation for the lawsuit seems to be a good one – “why should I have to pay to be on land that’s supposed to be owned by the American people?” That’s a great slogan. It sounds nice and it’s easy to understand … which usually means something else is going on.

Yes, a portion of our taxes pay for the land – but much in the same way owning a house isn’t a one-time-expense, maintaining and protecting 193 million acres isn’t cheap. This year alone the Forest Service estimates it will exceed its firefighting budget by at least $470 million and earlier in the year law enforcement officers had to save money by staying out of their vehicles for “office days.”

The primary purpose of the Adventure Pass is alleviate these budget shortfalls – especially on heavily trafficked lands near urban centers. According to the Forest Service Recreation Program Fee Accomplishment Report, in 2011 the Angeles National Forest collected $1.2 million in fees. About 2/3rds of that – $795,179 – went to maintenance and repairs. Another 17% went to visitor services and only about 3.5% was used to collect the fees themselves.

According to the Federal Lands Recreation Enhancement Act signed into law in 2004, the use fees are intended for five things:

LETTER OF THE LAW 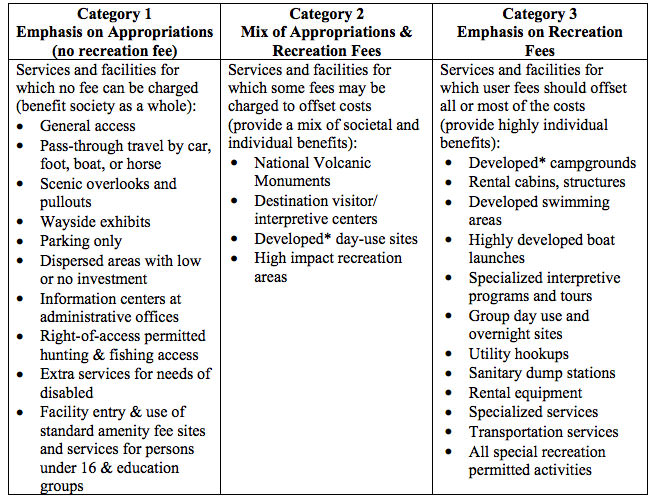 It’s interesting to note that some of the Forests do seem to charge for those Category 1 activities. Did you know you didn’t need an Adventure Pass to park at a scenic overlook? Because I’ve definitely seen signs that would lead you to believe otherwise – including the photo at the top of this post, taken near Big Tujunga Canyon. Right below this chart in the report, the Forest Service clarifies its ban on charging for “general forest access,” forbidding any fees “solely for parking or picnicking along roads or trailsides.” Again, compare that to the sign. Does that seem like the Forest Service isn’t following its own rules?

In December of 2013, the Forest Service revised its policy on those day-use fees – and as a result a large number of areas within the Angeles National Forest became fee-free zones. All that this ruling means is that if you park in one of these developed areas but don’t use any of those items (excluding, I presume, security – because what, if your car gets broken into are the rangers going to charge you the $5 day-use fee before they call it in to dispatch?), then you don’t have to pay the fee you otherwise would.

SO WHAT’S THE BIG DEAL?

Here’s my opinion: the Forest Service was definitely in the wrong to require an Adventure Pass on all the land in the SoCal National Forests. The language is very clear even to an outsider and I honestly don’t understand how the program was allowed to continue at such a scope for such a long time. I think the 2013 revision of what constitutes a fee-use area is a good compromise, as those areas generally do need more upkeep than the backcountry. However, I think this most recent ruling is at best unenforceable – and borders on being just plain silly. 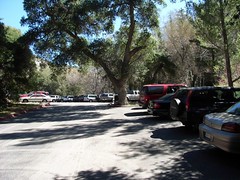 Let’s say I park my car at the Switzer Falls parking lot, but I hike directly into Bear Canyon for the day before returning to the car and heading home. I’ve now parked in a fee-use area but I don’t have to pay a fee. So how is that enforced? Will a ranger have to be permanently stationed at the parking lot? Will the Forest Service have to install cameras to monitor activity? Will I need to park in that awful overflow lot next to the Angeles Crest Highway and have to add extra distance and elevation to my hike? And if the National Forest turns into a patchwork of fee and fee-free areas, is the average visitor going to know whether or not they’ll have to pay before they leave home?

A solution for the Day-Use revisions is doable, though – and while it may cause some growing pains in the short term I think the Forest would be better off in the long run.

The Coconino National Forest outside Sedona, Arizona has a similar pass program as the Adventure Pass but it’s much better implemented. Their Red Rock Pass has one main, simple web site with information – including a note that leaving your car for 15 minutes for a photo or to enjoy a vista does not require a pass. There are daily, weekly, and annual options, almost every trailhead and ranger station in the region has an automatic pass machine that takes credit cards, and 95% of the passes’ revenue stays in the region. That National Forest actually reduced its fee-use areas in January of 2012 – before the original lawsuit was even decided. There is also a very cost-effective option to add admission to nearby popular areas not technically in the Forest to the annual fee and if you have an America the Beautiful Pass, you’re already set.

WHAT CAN WE DO?

Here in the California Forests, the boundaries of the Adventure Pass areas need to be much better defined. We need to take down all of those signs that say we need an Adventure Pass to park anywhere, make sure there are clear maps of where the fee is needed on both the Forest Service web sites and at the major entrances, increase the number of entry ranger stations that sell the passes, and perhaps install those self-service kiosks in the more popular day-use areas like Switzer Falls so people who need to pay can pay and those who don’t won’t have to.

In a perfect world, we would all be able to access this land without paying anything and all the agencies that manage them would be fully funded and never be considered for the chopping block during budget crises – but until we live in that world, I don’t think the day-use fee should be eliminated for heavy use areas. The revised area of use-fees for the Angeles National Forest that came out last year seems like a very fair restriction to those fees – and the fees themselves seem very, very reasonably priced – a Day Pass costs less than an HD movie rental on iTunes. I understand why being charged for amenities you’re not using may feel unfair to the people being charged, but I think that trying to draw a distinction between who does and doesn’t use developed facilities at a day-use site is a waste of resources – especially when the day-use fee is so low. Continuing to enforce the revised day-use areas is the best way to move forward with the National Forests – but whether you think the Forests need more resources, more efficient management, or a combination of the two – that requires a revision of the law itself.

People have been trying to clarify and simplify the law almost since it was written, and I think that’s truly the only way this situation is ever going to reach a resolution. The Western Slope No Fee Coalition is already urging its members to revise the law because of a loophole that allows the Forest Service to raise fees without public comment if it’s done through a concessionaire. Congress is working on an update to the law this year and if you want to see this issue solved once and for all I also encourage you to contact your legislators. 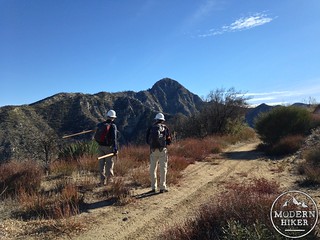 Until then – and I think many of you would agree – I’m not going to scour my maps to determine whether or not the area I’m hiking in is inside a fee area. I’m going to continue doing the same thing I’ve been doing since I started hiking out here – buying an annual pass for $30, hanging it on my rear view mirror no matter where I am in the Forest, and continuing to volunteer my time for trail work.

I love the National Forests out here. The Angeles is probably the main reason I stayed in Southern California during my first few years in the city and I want nothing more than to see it succeed and preserve its landscape for the next generations. We can continue to donate and support our nation’s wilderness as individuals in our own way, but to truly solve the problems underlying this issue we’re going to need to work together to help the Forest Service achieve the goal in its mission statement – “Caring for the Land and Serving People.”