A Modern Hiker reader contacted me last night, alerting me to the feed of street artist Andre Saraiva (Mr. Andre).

On Andre’s Instagram feed, the well-known street artist appears to have spent some time in Los Angeles before heading out to the desert, partially to enjoy the setting of Joshua Tree.

Unfortunately, one of his posts dated February 25th, Mr. Andre took his particular brand of artwork from the street to nature. 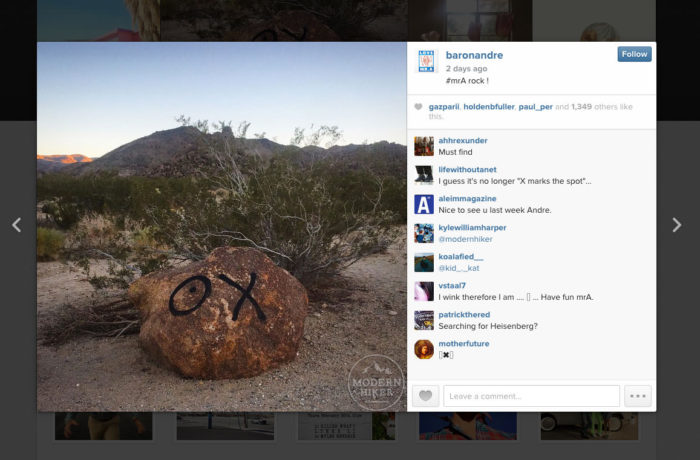 Unlike the Creepytings instances, there was no geotagging or easily identifiable location inside the National Park attached to this image.

Via Instagram, Andre claimed this piece was “created with love in a friends privet [sic] backyard.”

Previous images showed the artist’s work on the 29 Palms Inn. When I called, they verified the artist did have permission to paint on their walls.

Andre asked me to remove the boulder image from my Instagram feed. All I asked for was an update to the original image stating clearly that the work was done on private property, something that might show his fans and followers how to be a responsible street artist. 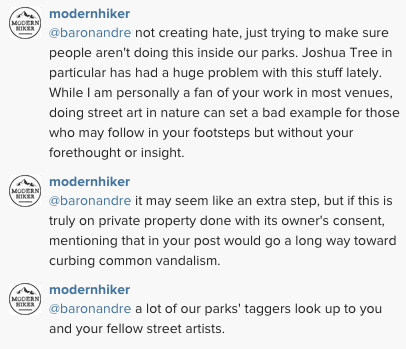 After more than two hours, Mr. Andre has not responded to our questions or updated the original image, although he has removed critical comments from his original post and banned people asking about the image from his account. 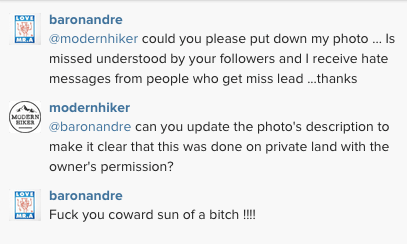 I can’t tell you if there’s a direct link between things like this and the truly staggering amount of graffiti that’s appeared in Joshua Tree over the past few years, but when street artists as famous as Mr. Andre post photos that even appear like they’re painting in nature without permission, it sends a powerful message that the outdoors is a fine canvas for your street art. And that, we feel, is a message that needs to be stopped.

Our good friend and partner in crime-fighting Rebecca from Calipidder recognized the terrain from Mr. Andre’s photo, and has identified it as the trailhead to the Contact Mine – located inside Joshua Tree National Park.

I snagged some screenshots from Google Maps Street View (where you can almost definitely see the boulder Mr. Andre painted on underlined in red), as well as the topograpghic profile in 3D from CalTopo. 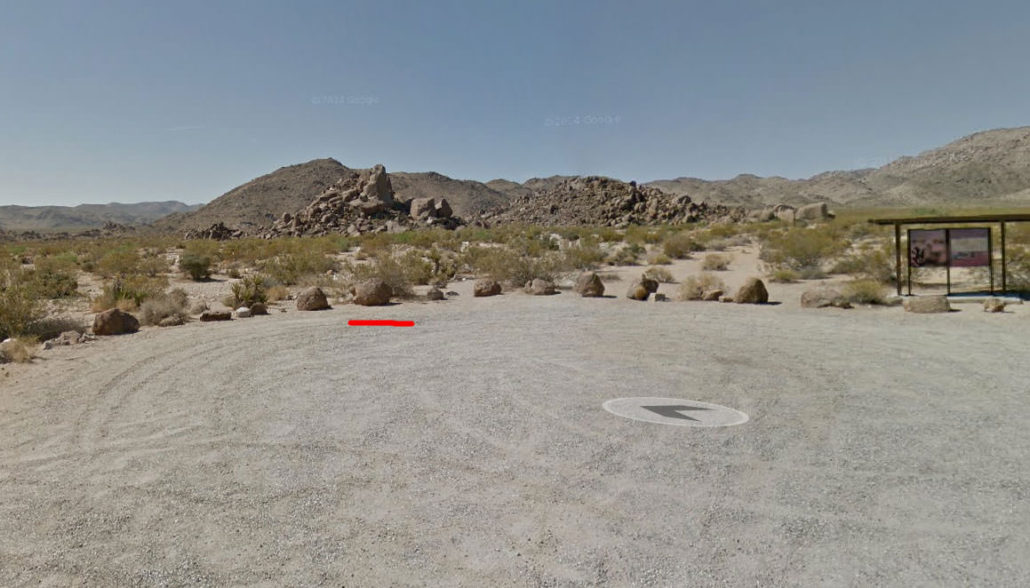 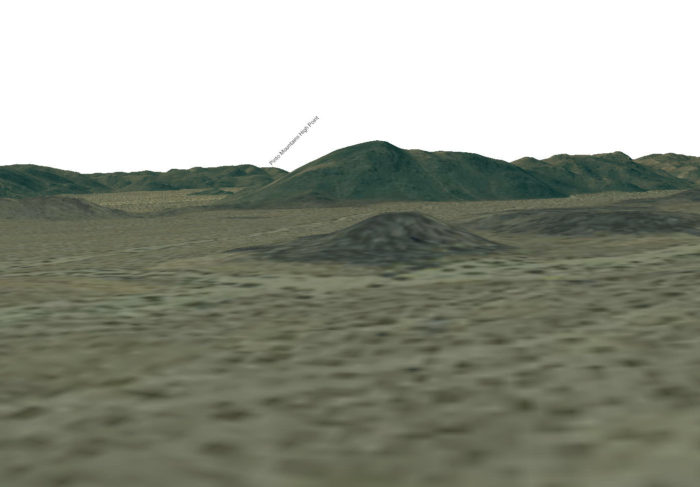 CalTopo of the Trailhead’s topo profile 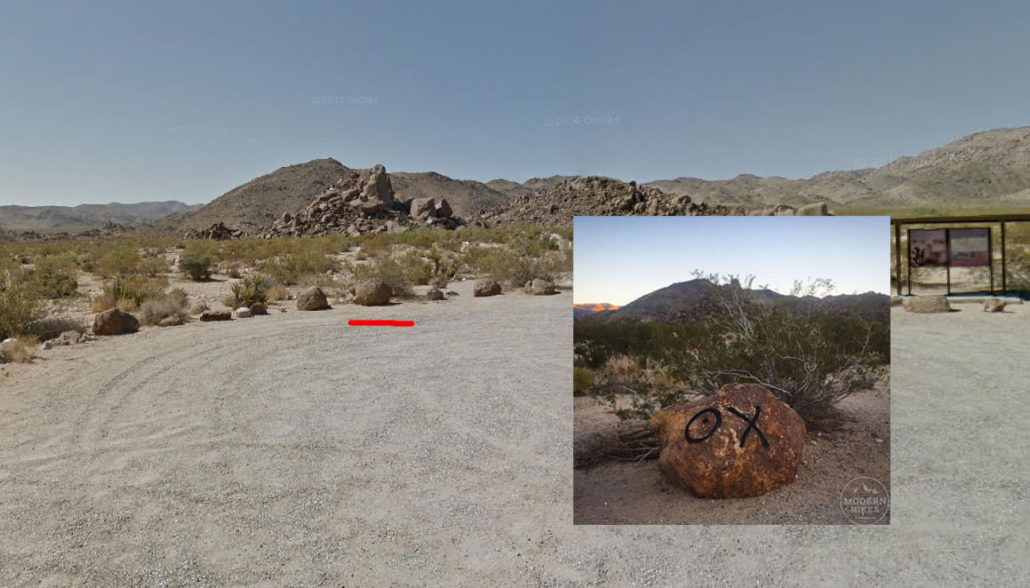 Twitter user DarthJenni clued me into the web privacy app Ready or Not, which tracks a user’s social media posts and maps their likely location. 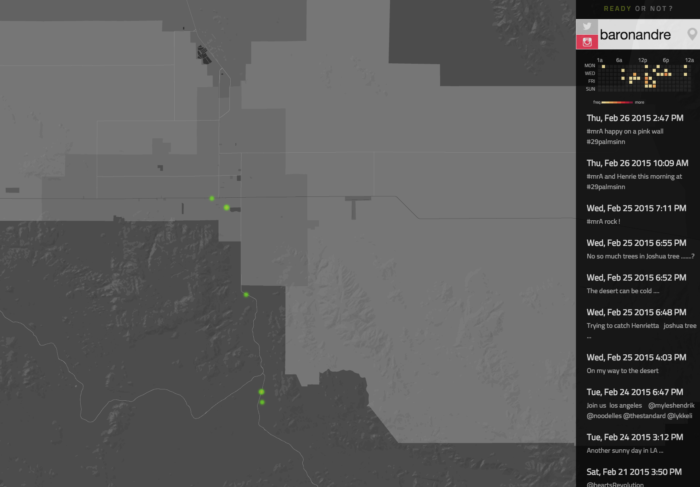 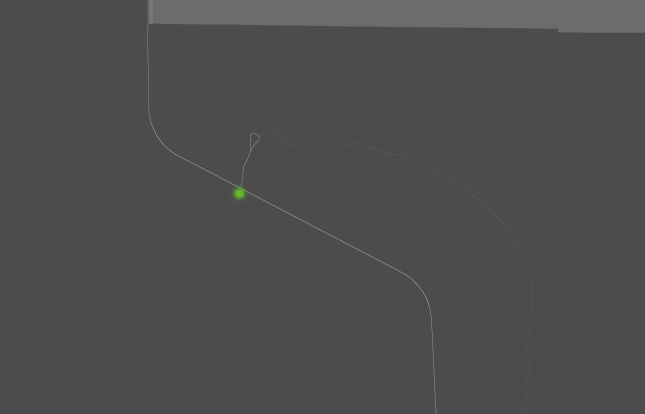 Jeff from SoCalHiker noticed this image on Mr. Andre’s web site (under Graffiti, Mr. A if you’re interested).

Reader DESERTED just noted the EXIF data in this image is from July, 2013. We still don’t know where this is but it’s definitely not from this recent trip to Southern California. It does, however, show his willingness to tag on natural surfaces. 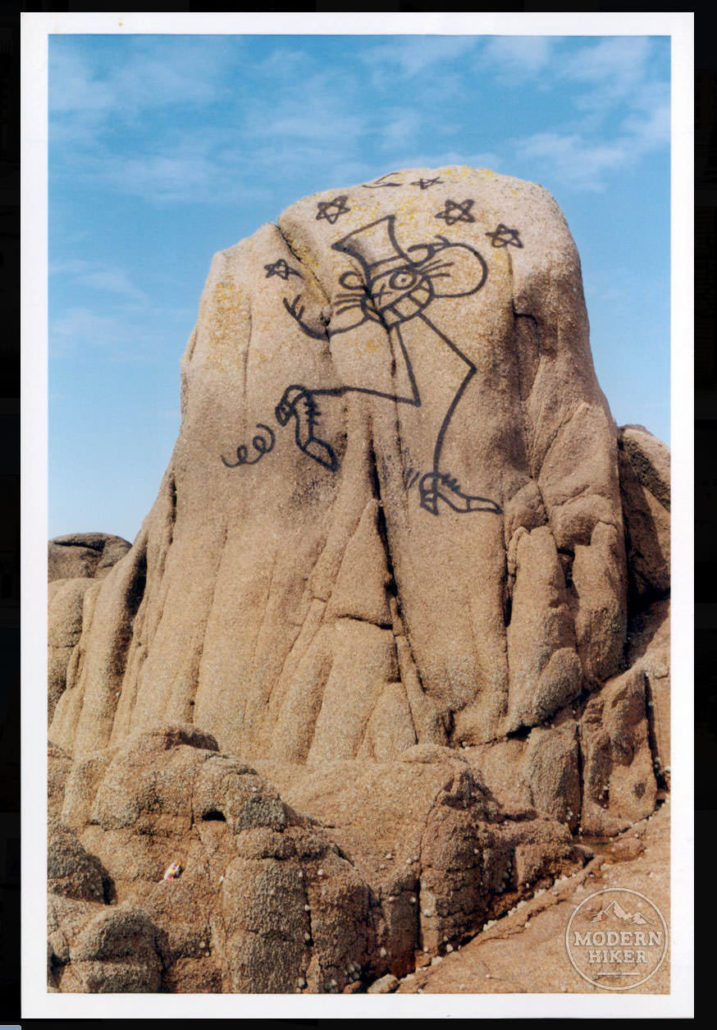 We’ve been blocked from Mr. Andre’s Instagram account, but reader Kevin noted in the comments that Mr. Andre has deleted the original image from his Instagram feed.

We just got off the phone with Joshua Tree’s Chief Ranger Jeff Ohlfs. He thanked Modern Hiker readers for their diligence and “for being (their) extra eyes and ears in the park.” It sounds like a lot of you have called in or tagged Joshua Tree on social media, and Ohlfs said they had Mr. Andre “in (their) sights.”

We’ll stay on top of this story and will update as we get more information. Thank you to everyone who helped identify the location and report this story to the proper authorities. We hope Mr. Andre is held accountable for his actions and more importantly, learns the value of our natural landscapes.

Readers sent in this Facebook photo from today. A visitor was reading about the story and happened to be near the northern entrance – so she drove down to the trailhead to see if the tag was still there. 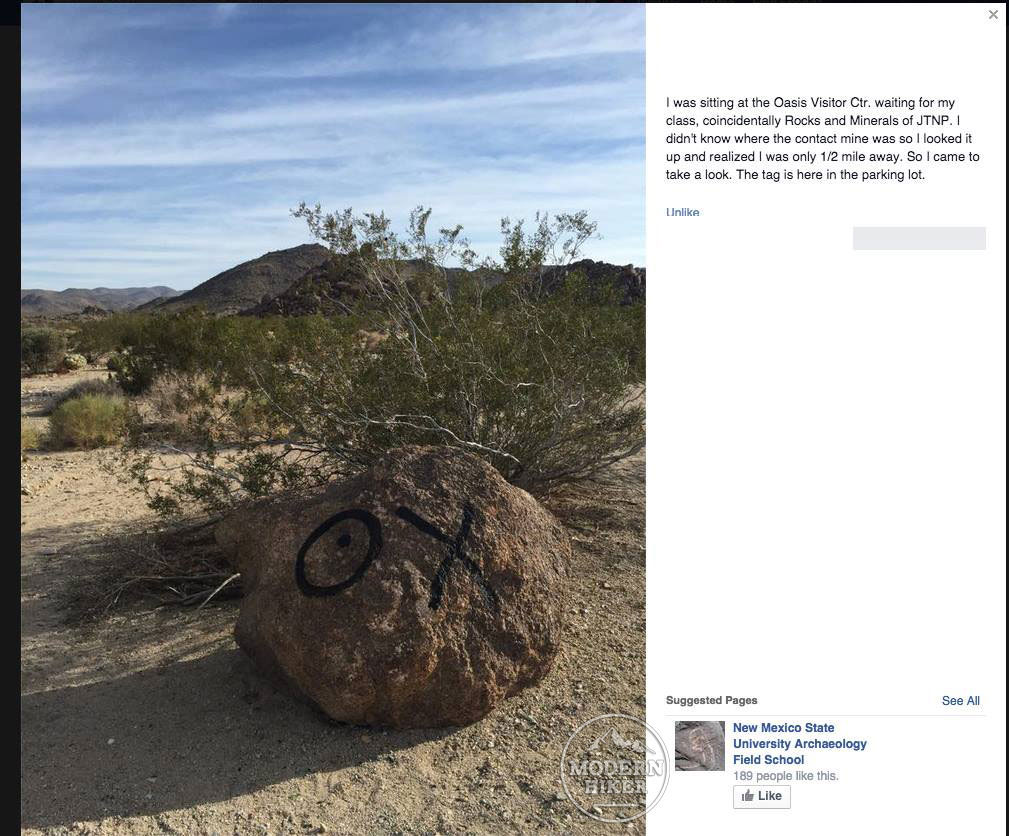 On another user’s Instagram account, Mr. Andre claimed that the larger rock formation image was not done in Joshua Tree. He also said it was “much appreciated here over sea” and that “(his) graffitis are all about love and have the greatest respect for nature.”

We think there are much better ways to show love and respect for nature, don’t you?

LAist has picked up our story and hopefully will help spread the word and follow Mr. Andre. From what we’ve heard, Mr. Andre has left the country.

Readers have found a profile on Mr. Andre in GQ from earlier this year. 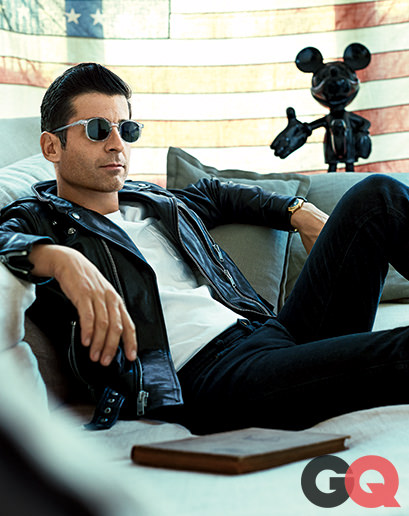 In it, you can read about the artist’s fashion sense, his wonderful nightclubs, and how much he loves visiting Joshua Tree when he’s in Southern California.

The article has a comment section and also mentions many places he does business, just in case you have any strong feelings about the artist’s work you’d like to share.

Mr. Andre has contacted us via his lawyers. Both his letter and our response can be read on our follow-up post.

Tami Roleff, Managing News Editor for KCDZ-FM, saw our story and traveled out to the site of Mr. Andre’s alleged graffiti.

As of March 11th, 10:30AM, the graffiti has been removed and stripped clean of paint. She has provided images which we have posted below. 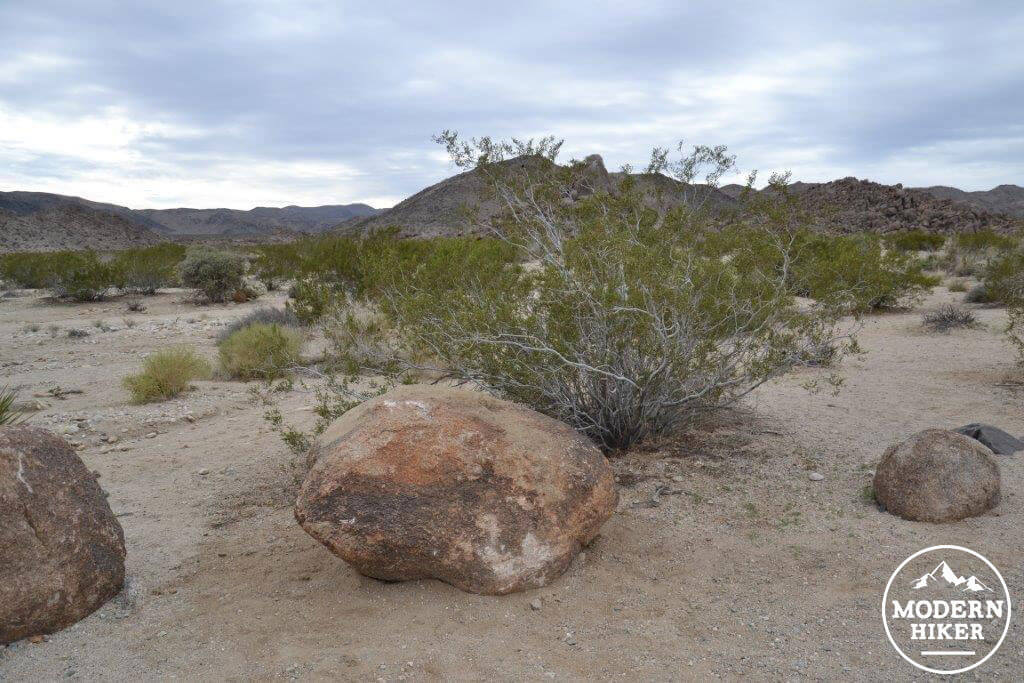 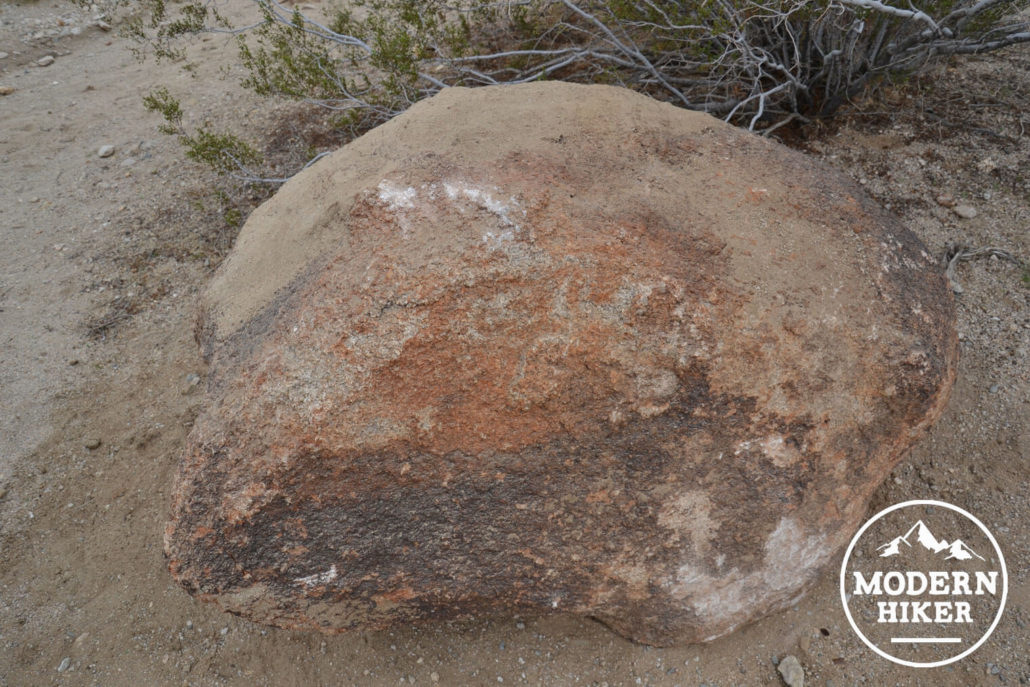 At this time, we have not been able to determine who is responsible for the cleanup. The National Park Service is not commenting due to the ongoing investigation.

Roleff noted an abundance of sand on the back of the boulder and a lot of soil disturbance at its base, and it looks as if a layer of desert varnish may have been removed by whoever did this. According to the National Park Service web site, desert varnish generally takes thousands of years to form on rock surfaces like this.

Some readers have noted that the boulder looks like it may have been moved in comparison with earlier photos.

We found this image on Instagram of the boulder as it appeared last week, with the alleged markings covered up. The photographer is writer, environmental journalist, and tireless desert advocate Chris Clarke, who lives nearby.

Mr. Andre threatened to sue Modern Hiker for our efforts in publicizing this story. We issued a response that we would not be taking our story down.

Saraiva later paid a small fine to Joshua Tree. Later, his publicist encouraged him to apologize to the Los Angeles Times, which he did in an article that also complained about repercussions of being caught.

Less than a year later, the Times ran a story about how much he loved the “vibe” of L.A. and his new collaboration with Uniqulo. No mention was made of his vandalism of National Parks.