Just after Donald Trump’s inauguration, the official National Park Service Twitter account retweeted some photos of the crowds at the event comparing them to those at the inauguration of Barack Obama. Many were initially surprised at the seemingly flagrant nose-thumbing from an organization generally known for going out of its way to avoid controversy, but that was quickly overshadowed by the Trump Administration’s decision to place a blanket social media gag order over the entire Department of the Interior. 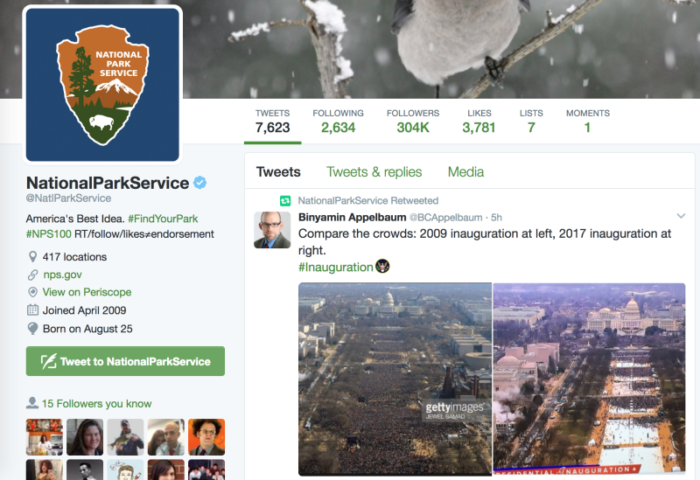 Screenshot of NPS account retweet, which has since been deleted

The original Tweets were deleted and the gag order was lifted — and almost immediately the official account for Badlands National Park began tweeting scientific facts about climate change. Other accounts like the Golden Gate National Recreation Area and NASA Climate chimed in with climate facts after the EPA was presented with a similar gag order, and while most of the official Park Service accounts started playing by the new rules, a flurry of new “Alt” accounts popped up that were much more forward with their criticism and activism. 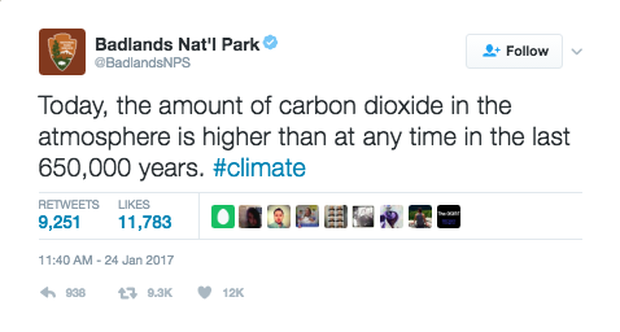 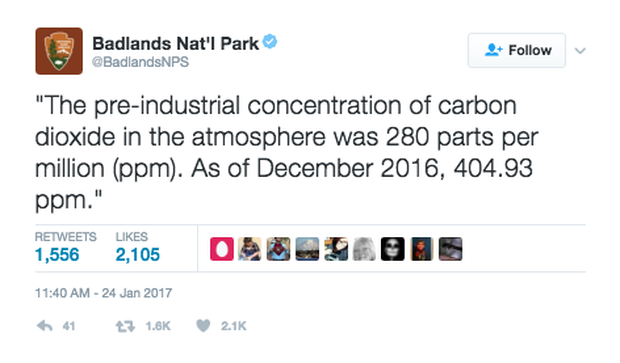 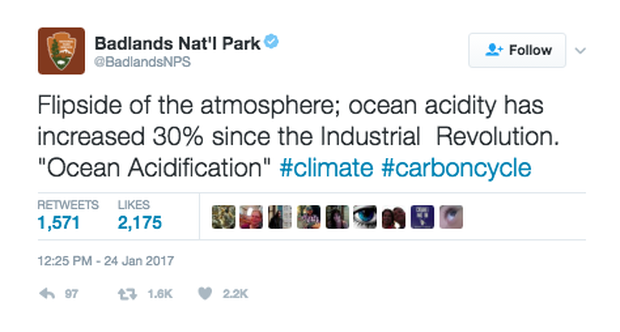 The “Alt accounts,” as they are generally known, are a secretive and decentralized group. Many of the account managers are former or current employees of the agencies they represent as Alt accounts and many operate them knowing full well that if their identities become known they could lose their jobs.

Modern Hiker spoke with the operator of the AltYellowstone National Park — one of the ‘core four Alt accounts’ via Twitter direct message over the past few weeks about a movement that may have been started by an accidental slip of the finger, the challenges of organizing a cohesive voice for a decentralized group, how to spot fake Alt accounts, the best ways for people to support public lands when the Administration won’t, the group’s next strategy to protect our parks, and why you shouldn’t ever buy an “official AltNPS” item from a site on Facebook.

Modern Hiker: The National Park Service is known for generally avoiding overt political stances. What inspired the Alt accounts to break that tradition?

AltYellowstone: NPS is still pretty shy about going political. The initial set of photographs was almost certainly an individual employee’s act of defiance. However, given that NPS employees are nearly to a man very dedicated to their jobs, it’s high time they had some outlet for their views about protecting the parks.

MH: How do you combat an environment where simply stating a scientific fact is seen as a political act?

AltYellowstone: Climate change is for some bizarre reason a touchy subject in this country. The parks have for a long time had a “don’t argue with them” view of it when it comes to the public.

I’m thrilled that after all this time something happened that finally allowed Parkys (slang for NPS employees) to speak up. Even if it is in an unofficial capacity

MH: Was there a coordinated effort to establish Alt accounts for parks? Do the accounts work together on positions?

AltYellowstone: As near as I can see there was no coordinated effort. And yes we try and work together although there are the standard disagreements you get with any group. I’m the moderator here at ‘AltYello’ ( Ominous Ann ) and our big push is for increased cooperation and coordination. It gives us a bigger voice 😉

MH: There is a degree of secrecy / anonymity around the Alt accounts. Why is that necessary?

AltYellowstone: For myself I don’t think my job is on the line … I hope, since I’m stationed about ten feet outside the park in a highly specialized position. But for others it’s a simple matter of preserving their jobs. While I’ve been left alone by the powers that be, other Alt accounts have been forced to modify their emblems and language in order to meet dilution needs.

I have a really good grip on what’s likely to anger our park officials and so I’ve been able to keep our nose clean of any conflicts.

I think it’s likely half the park accounts are fake in that the people running them don’t have anything to do with the parks and just don’t have a clue about park policy. Rather than reveal that they jump on the “we’re afraid for our jobs” bandwagon.

MH: The presence of fake accounts raises an interesting dilemma for the general public. Because the accounts are anonymous and can’t be verified by Twitter, how can readers know whether an Alt account is ‘official’?

AltYellowstone: None of the Alt accounts can be official. It’s kinda the basis of having an Alt account. Readers are just going to have to figure it out. I watch for a few signs — does the account seem to know anything about the particular park they claim to represent? Things like that.

Also, I’m seasonal so I’ll be back into the park right after shoulder season, taking pictures and posting park news right and left. There’s no way you can miss a real account by someone actually in the park.

Selling counterfeit parks logo stuff is a dead giveaway, too.

The Old Road, Yellowstone. Lumix DMT-FT6. Cant tell you where it is 😉 Its just one of those places you have to find for yourself pic.twitter.com/ISms05ZAMJ

MH: I just noticed an Alt account’s page come up in a sponsored post on Facebook that was selling “official” stickers and shirts. Is that not directly tied into the movement?

We have zero authorized sales items — bumper stickers or otherwise — so anyone selling swag is likely just grifting off the cause. Basically we’re only working with a few people and they are NOT selling swag. 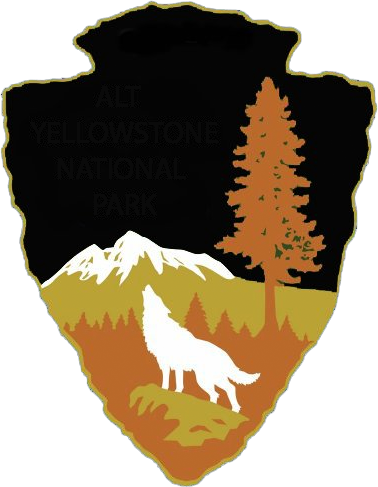 MH: I feel like most people don’t know that.

AltYellowstone: Yeah it’s not cool at all. It’s against our policy to be selling products although some of us are photographers and we might start selling prints in order to make up the last bits we need to move forward with our UNESCO effort. We’ve stalled out about halfway to our fundraising goal to make it happen. So we’re exploring other ways to try and fund it.

The ‘core four’ group (AltUSNPS, NastyWomenofNPS, AltYellowstoneNatPar, and AltHVNP) has no way to actually vet accounts (when they appear on Twitter). We watch for things like start dates matching up, follow numbers being nearly identical, and nothing but retweets … as well as selling parks logo or diluted logo products.

(Editor’s Note – Ominous Ann  provided us with a longer list of recommended Alt accounts, which you can access at the end of this interview).

MH: The UNESCO initiative — is the thinking that designating more sites as UNESCO World Heritage Sites, they can get further protection? Does that designation offer any legal protection or is it just elevating them to sites of global importance and better awareness?

AltYellowstone: It does give them legal protections. UNESCO World Heritage status is kinda a big deal. Yellowstone is already a Heritage Site but many other key parks aren’t. We’re not doing this for just ourselves. We fight for all national parks and forests.

MH: What are the Alt accounts hoping to accomplish in terms of engagement from their followers? What would they like to see happen?

AltYellowstone: I can’t really speak for the other Alt accounts but as for us I’d like to see more involvement from the public. In general the public is about 80+% for the parks, so if we can engage them politically we should win this fight.

MH: What do the Alt accounts hope to accomplish?

AltYellowstone: I think we’ve already accomplished a lot. We’re getting the word out on climate change. We’re acting to shoot down bad legislation and we’ve brought attention to our parks like never before. It’s been fantastic for both the parks and for alt parks.

MH: What’s the best way for the average park-lover to support positive change and keep the parks a vital component of American life?

AltYellowstone: Visit the parks, show your support to the rangers. Act when called on politically to defend our parks. Its pretty simple. Get involved.

Research the “Anti-Parks Caucus” and you’ll learn a lot about the energy industries paid politicians who are working hard to gut our parks for drilling spilling and open pit mining.

MH: We dug into some of the anti-public lands initiatives in Congress back in January and a lot of the same names kept popping up over and over again. Is the “Anti-Parks Caucus” a group that’s acting in concert and have you noticed any similar proposed bills and rule changes from them in the past?

AltYellowstone: The Anti-Parks Caucus is a group of ultra right-wing, white supremacist, ultra-nationalist republicans who want to remove federal protections from public lands and sell them to the highest bidder. Basically they are oil and gas industry front men in the party and would sell their own mothers if it made them a buck.

The basic goal is to destroy the national parks and forests through fossil fuel development — H.J.Res-46 (which overturns bans against oil and gas exploration in certain types of National Parks – Ed.) introduced by Rep. Paul A. Gosar (R-AZ-4) is a perfect example. We’re fighting that clown tooth and nail.

We’ve shut down his phones again and again and forced him to respond several times. We’re about to begin a calling campaign to his district to explain to them our problems with the guy. He’s sold out our parks and people need to know. (Tribune Media pointed out that Gosar received $250k in campaign contributions from oil and gas industries – Ed.).

MH: Any final thoughts on the Alt accounts movement and your place in it?

AltYellowstone: I’m a small fish in a big pond. I never expected this to blow up they way it did. I never thought I’d be risking my job and I really didn’t think this would go on and on the way it has. I’ve never been politically active in my life.

I guess I don’t have a clue how you’d describe me. I’m nobody who ended up in between something much larger than myself … and not so sure what to do.

I guess I just try and live up to the Park Service and let that take me where it has.

I’m kinda on this roller coaster for the ride, just trying to keep my head above water and doing what I can to protect my park through difficult times.

This interview has been edited for clarity and length.

You can support the Alt account’s fundraising efforts to hire a United Nations attorney to fast-track their UNESCO World Heritage Sites plan at their GoFundMe page.