A trip through a beautiful, fascinating, and often-bypassed National Monument northeast of Flagstaff that preserves the ruins of an extensive Sinagua settlement at a major trading crossroads

Most people driving north on US-89 from Flagstaff are headed to that most marquee of marquee National Parks – the Grand Canyon. But with a short detour off the main road, inquisitive explorers can enjoy two fantastic National Monuments on a loop drive – Sunset Crater Volcano and Wupatki. The highlights of both parks can be done on a single day’s trip, and both parks are highly recommended. When I was in Flagstaff I didn’t even know these places existed until I heard about them at Walnut Canyon National Monument — they’re exceedingly off the beaten path and also extremely worth your time. In particular, I found Wupatki to be an unexpected highlight of a month-long trip all over the Great Basin in Utah and Arizona.

There isn’t a ton of what you would likely consider hiking in Wupatki – there’s a half-mile loop at the Wupatki Pueblo and some short roadside interpretive walks near some of the other major sites – but the Monument itself is most definitely worth your time.

This description follows a counter-clockwise route on the Loop Road, hitting Wupatki after a stop at nearby Sunset Crater Volcano National Monument just to the south. There are about 4.3 miles between the border of the Coconino National Forest past the Kana-a Lava Flow and the border of Wupatki. 2 miles from the Monument’s border, take a right off the loop road toward Wukoki Pueblo, which you’ll reach at the paved road’s end.

This particular dwelling is your first introduction to the magic of Wupatki – rising like a New World version of a medieval castle, the multi-floored structure of Wukoki appears on the stark horizon as if from a strange mirage. 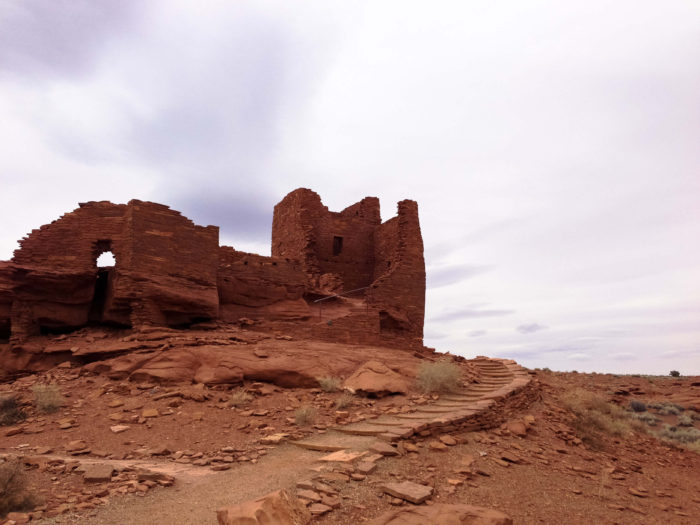 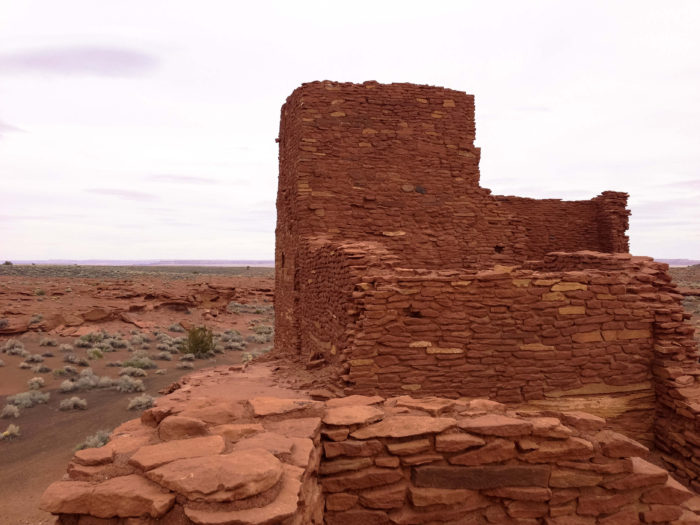 You can walk right up to, around, and in some cases inside this structure, which provides ample opportunities to marvel at the ingenuity of the people who inhabited this seemingly inhospitable site. Please do stick to the marked pathways, though, and don’t wander off on your own route — these structures are fragile and protected.

As impressive as Wukoki is, the central pueblo of Wupatki is even moreso … so return to your car and drive back toward Loop Road. Take a right and in 0.3 mile, turn left to enter the main visitor center for Wupatki National Monument.

Here, the well-kept visitor center does an excellent job of telling the unique story of the Sinagua people who moved to the region after a volcanic eruption in the 1100s blanketed the area with ash and cooled the climate, creating more rain than the region had received before. The ash did choke out many of the existing plants, but it also made the ground more fertile for crops and did a better job of holding on to the precipitation that fell on the region. Still, farming was marginal at best, and the Sinagua had to rely on an extensive network of trade to get the goods and necessities required to maintain such an extensive settlement.

Archeologists have found more than 125 different types of pottery in the National Monument, and items from as far away as the Gulf Coast and Pacific Ocean have been uncovered here. As a testament to the extensive cultural reach of this site, many of the descendent tribes of the Sinagua and Ancestral Puebloans continue to consider the Wupatki area a sacred site, including the Hopi Bear, Katsina, Lizard, Rattlesnake, Sand, Snow, and Water Clans. 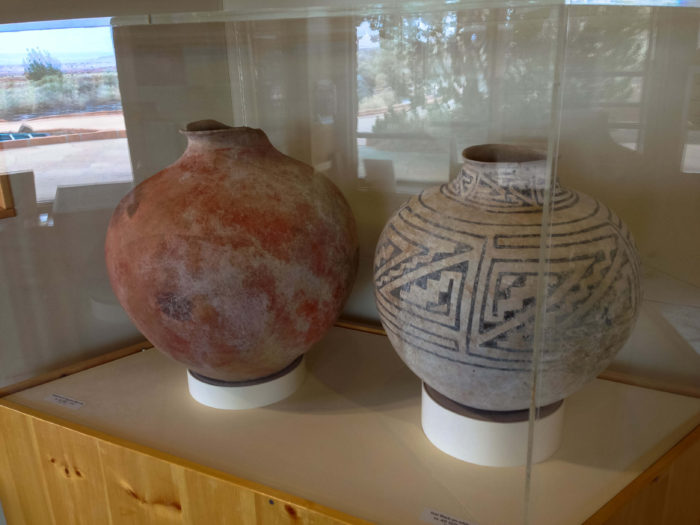 some of the impressive pottery at Wupatki was found essentially intact, buried underground

Once you’ve soaked up some knowledge from the rangers and volunteers at the visitor center, head outside to the Wupatki site itself, where a 0.5 mile loop trail takes you through these shockingly intact ruins of Wupatki. 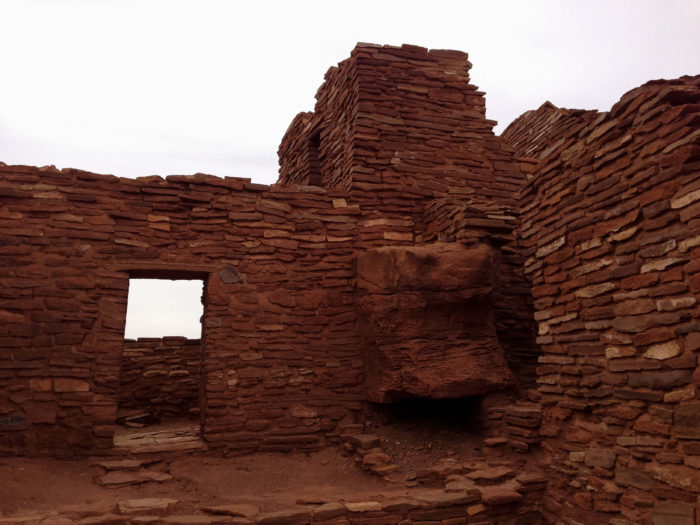 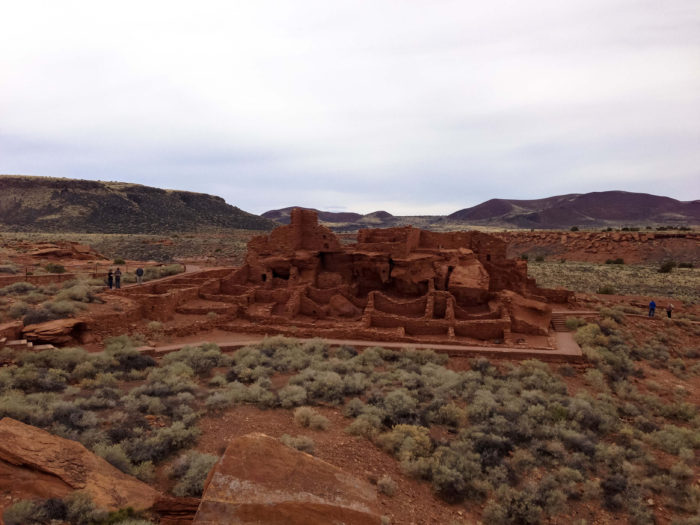 “Wuptaki,” which means “tall house” in the Hopi language, is a fascinating placr. Containing more than 100 rooms and reaching multiple stories high, the Wupatki ruin is still the tallest building around for 50 miles.

Because it was at the crossroads of many cultures and oversaw an extensive network of trade, there are lots of influences from cultures you may not expect to see here. The lowest building at the site is a large, circular meeting area that resembles the kivas of the Ancestral Puebloans. At the north end of the site, there are ruins of a ceremonial ball court similar to those found more frequently in Mesoamerica and at Hohokam sites further south — in fact, this ball court is the northernmost known example of such a building. 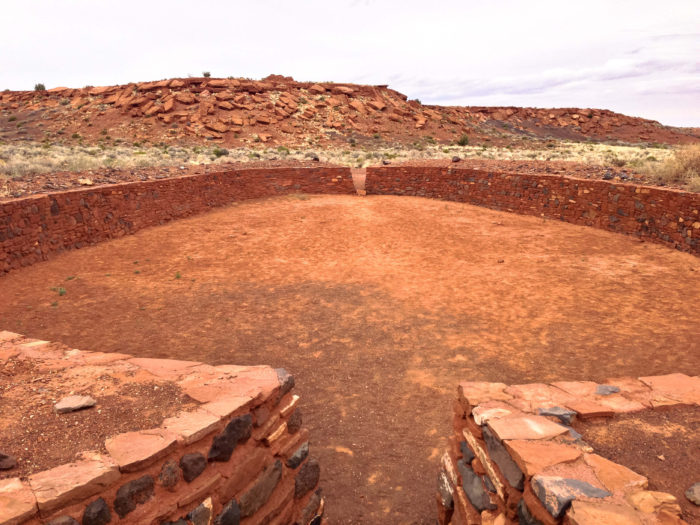 The paved path meanders and weaves through the Wupatki site and even enters some rooms, but please don’t walk or stand on any walls or otherwise disturb the site while you’re there. 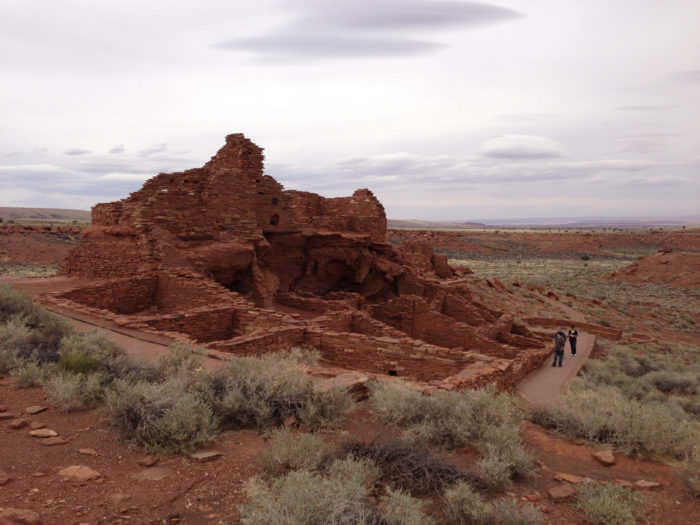 Be sure to also stop by the blowhole just off the interpretive trail at the Wupatki ruins site.

The Wupatki region is dotted with several of these blowholes, which are small holes in the ground that either blow air out or suck it in, depending on atmospheric conditions. Although there are no records as to the significance of these geologic features, where they do seem to occur in the region they are often accompanied by a settlement. Attempts to map the blowhole here have been thwarted by narrow openings, but researchers were able to determine the blowhole is connected to a vast underground airspace that measures around 7 billion cubic feet.

Spend as much time as you like at the Wupatki site. Once you’re ready to move on, there are several additional roadside stops on the way back toward US-89: an overlook near Doheny Mountain that provides some sweeping vistas of this volcanic region, as well as short interpretive trails at Citadel, Nalakihu, and Lomaki Pueblos as well as a view into the Box Canyon Dwellings. 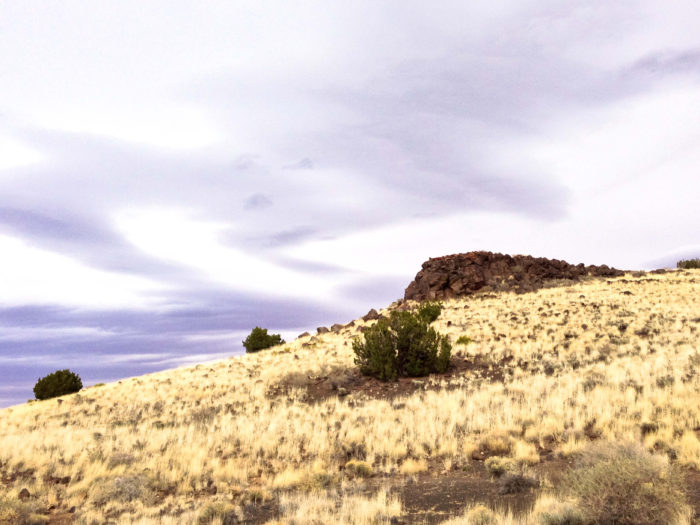 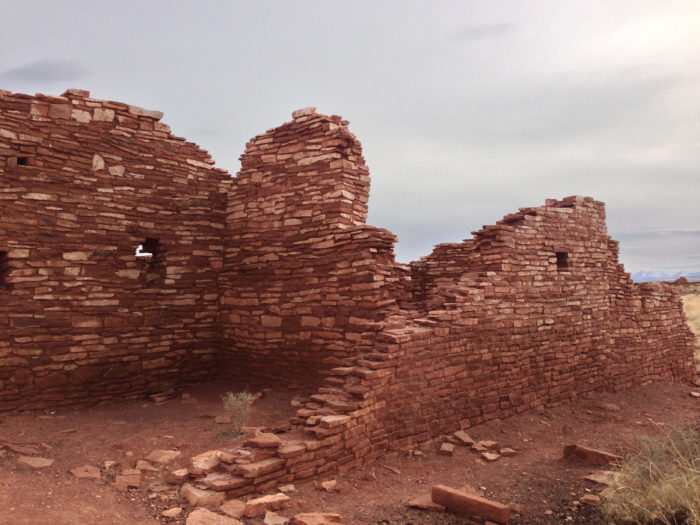 For those interested in a more strenuous hiking experience, it is possible here in Wupatki but it does require a bit of planning and luck. On weekends in April and October, backpackers can join NPS rangers on the Crack-in-Rock Hike, where the rangers will guide you to rock art and architecture that is not usually open to the public. The hike is a 16-mile cross country overnight and each hike is limited to 12 people. Participants are selected through a lottery system and there is a fee required (currently $75). Call 928-679-2365 for more information and keep an eye on the park’s web site for additional announcements and information. 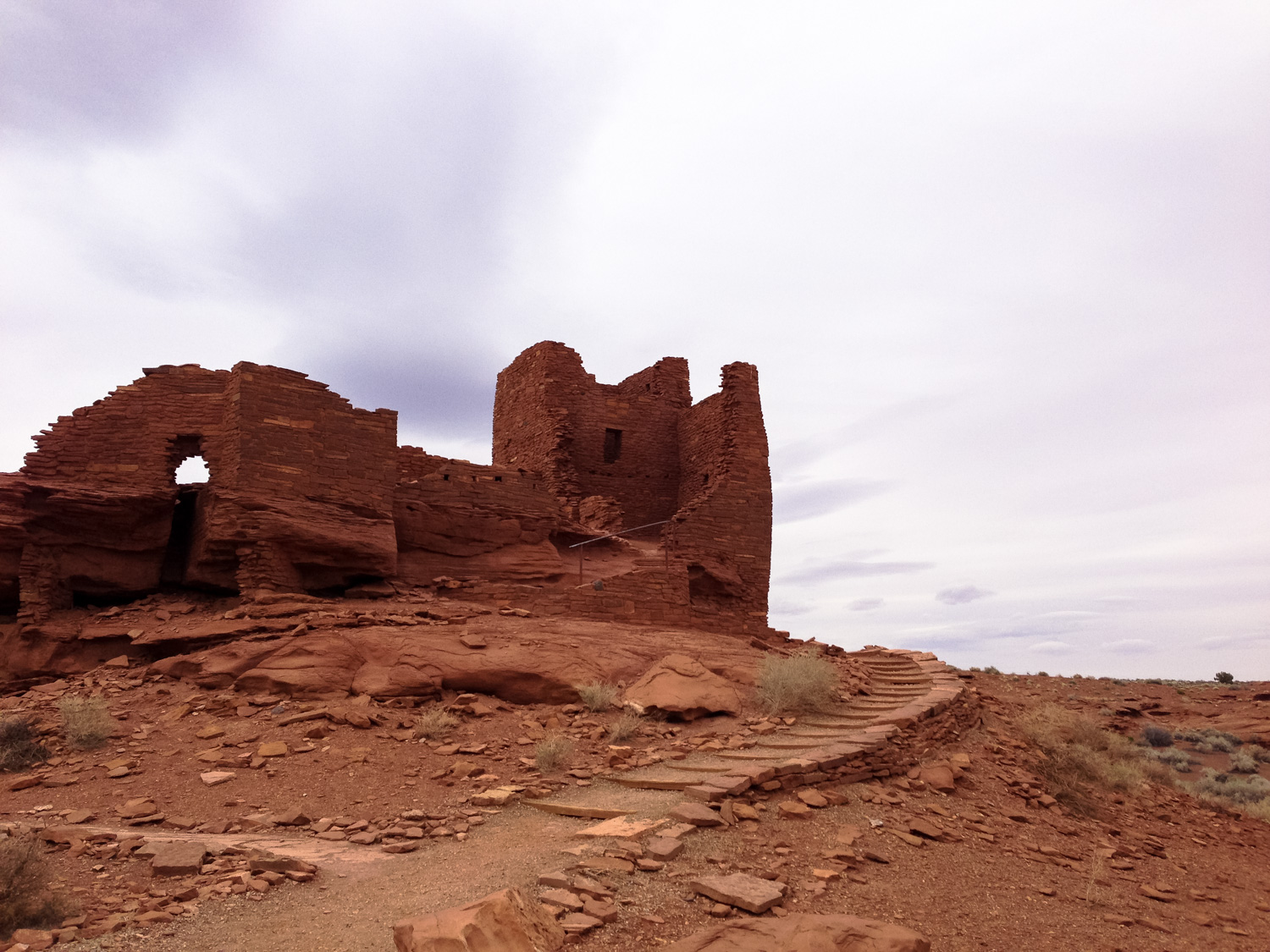 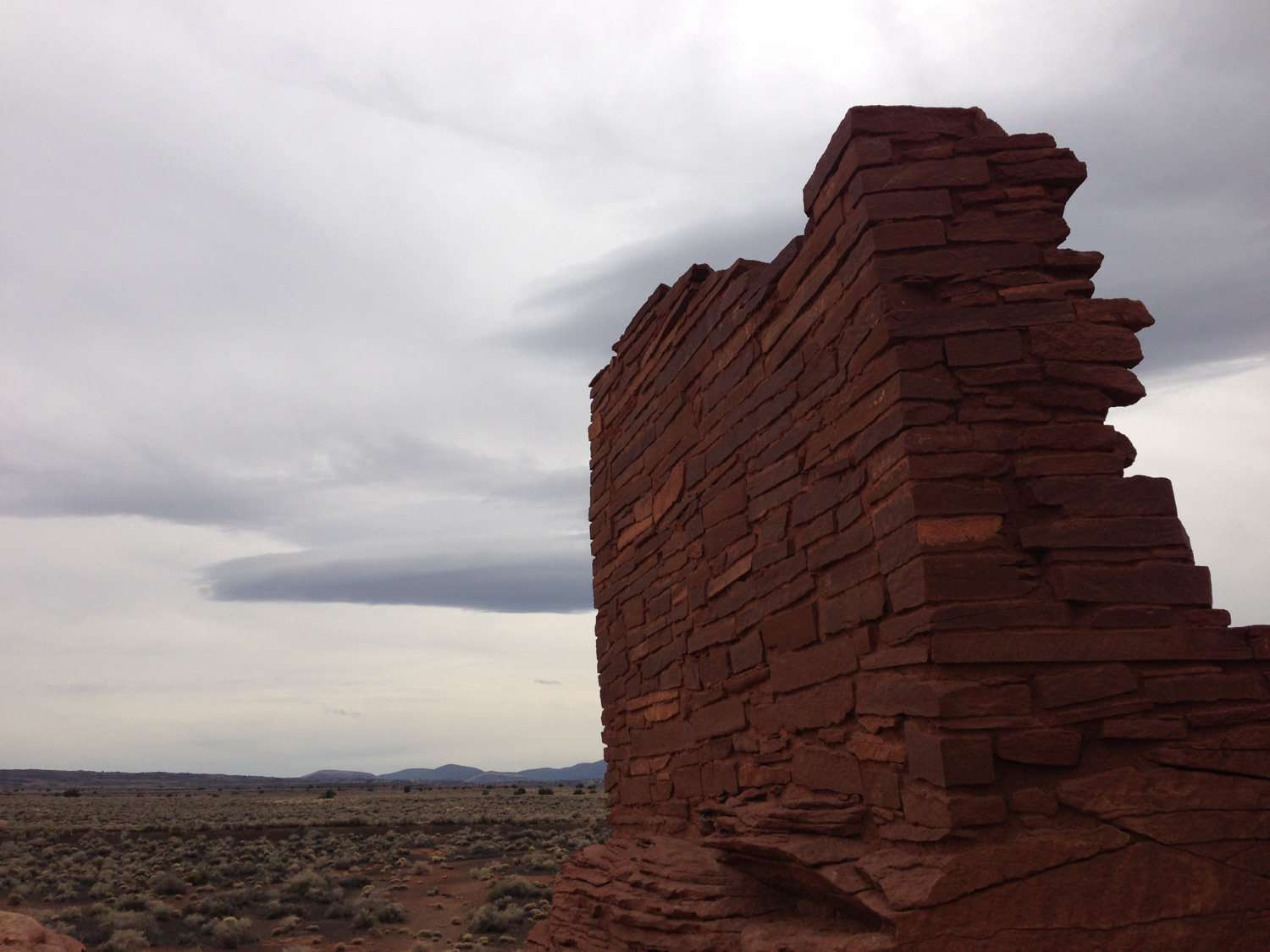 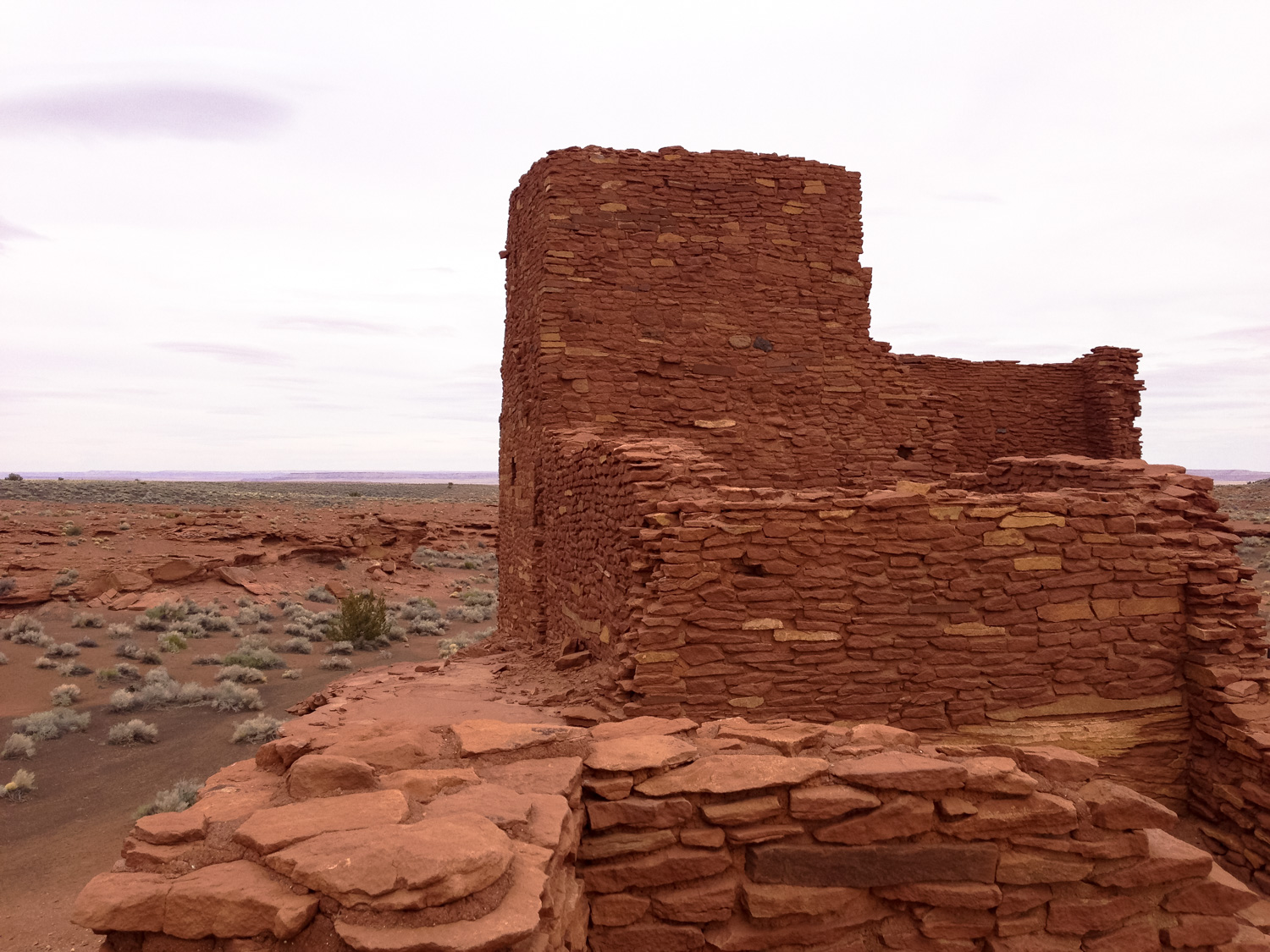 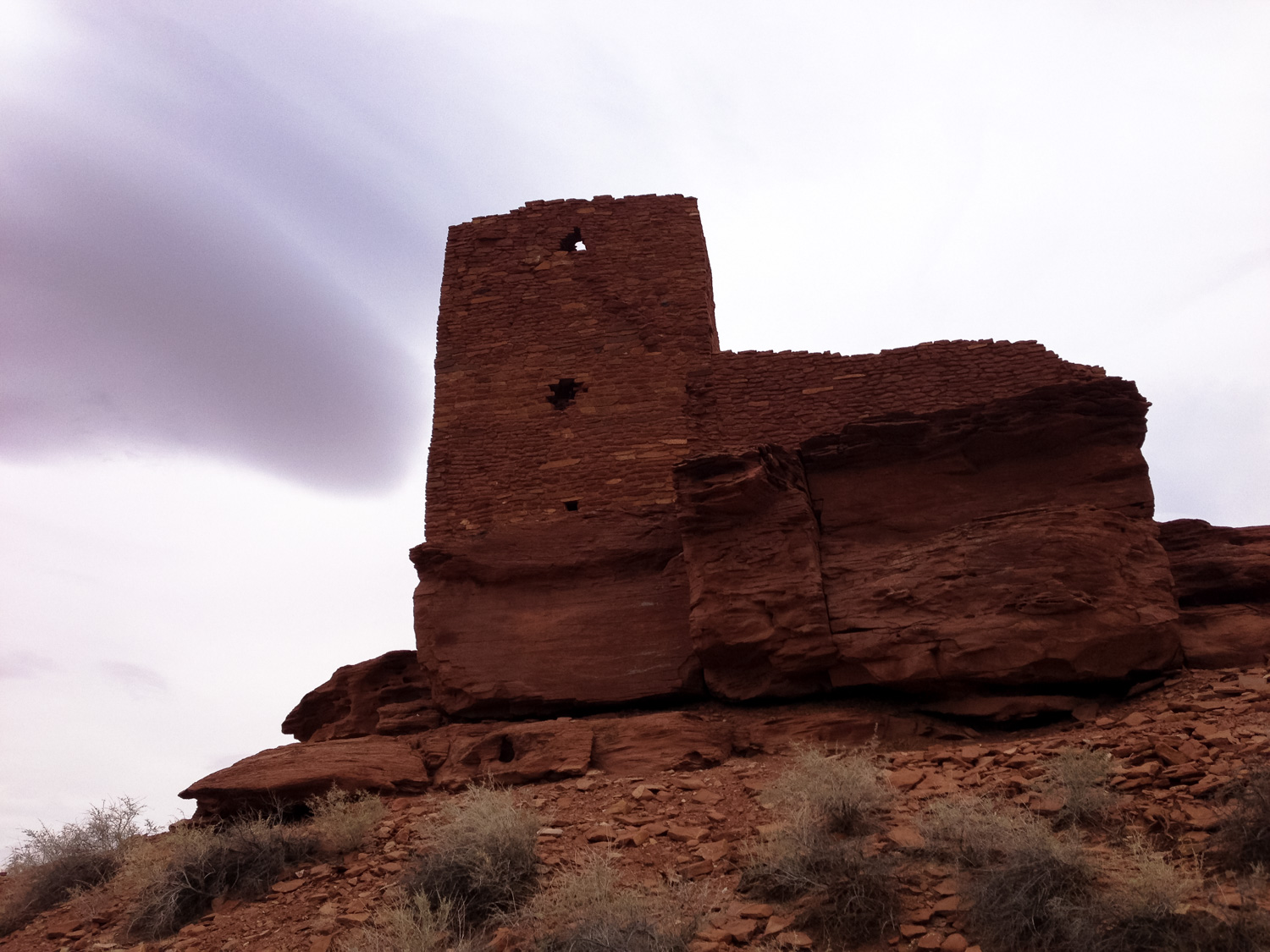 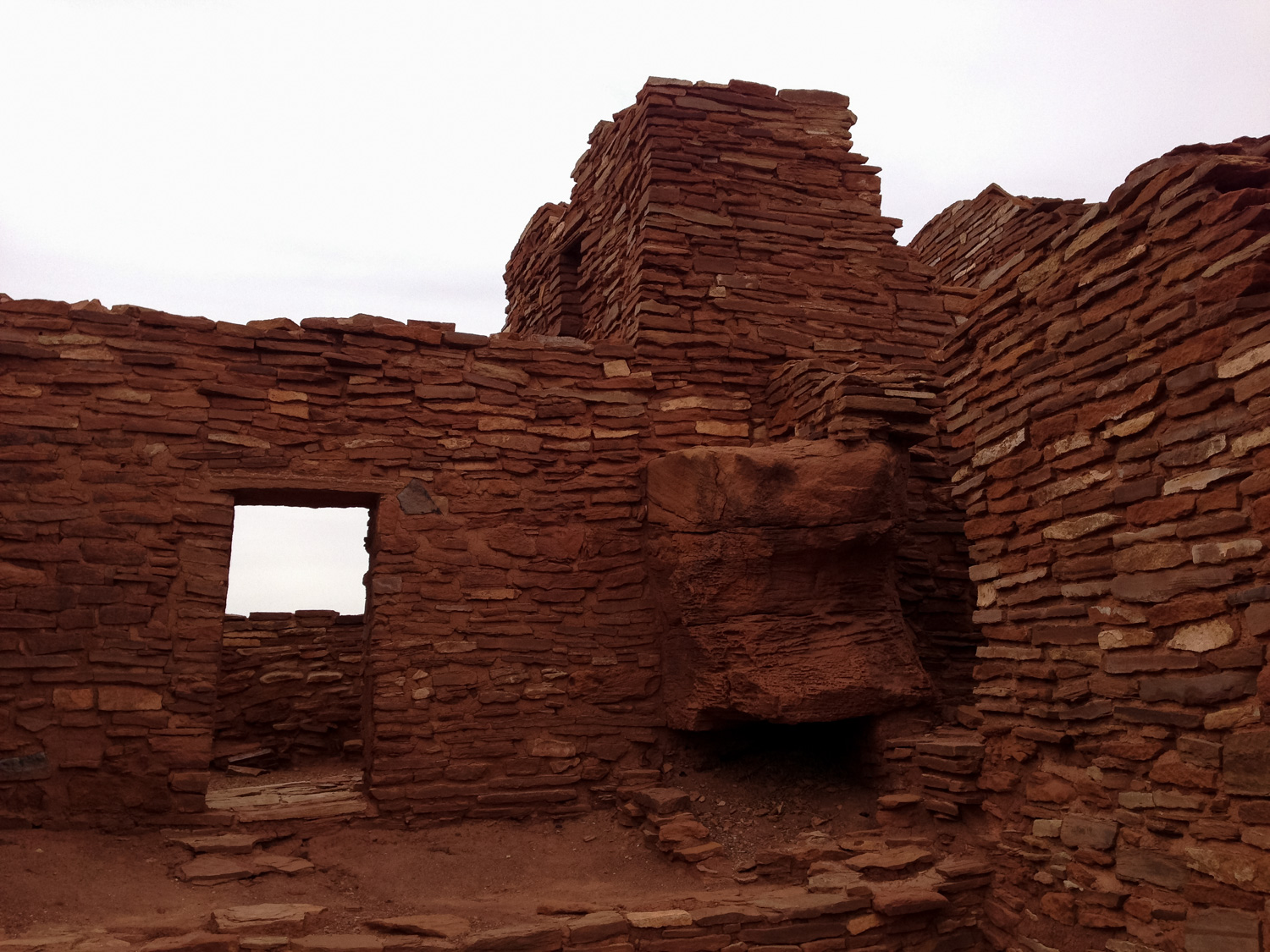 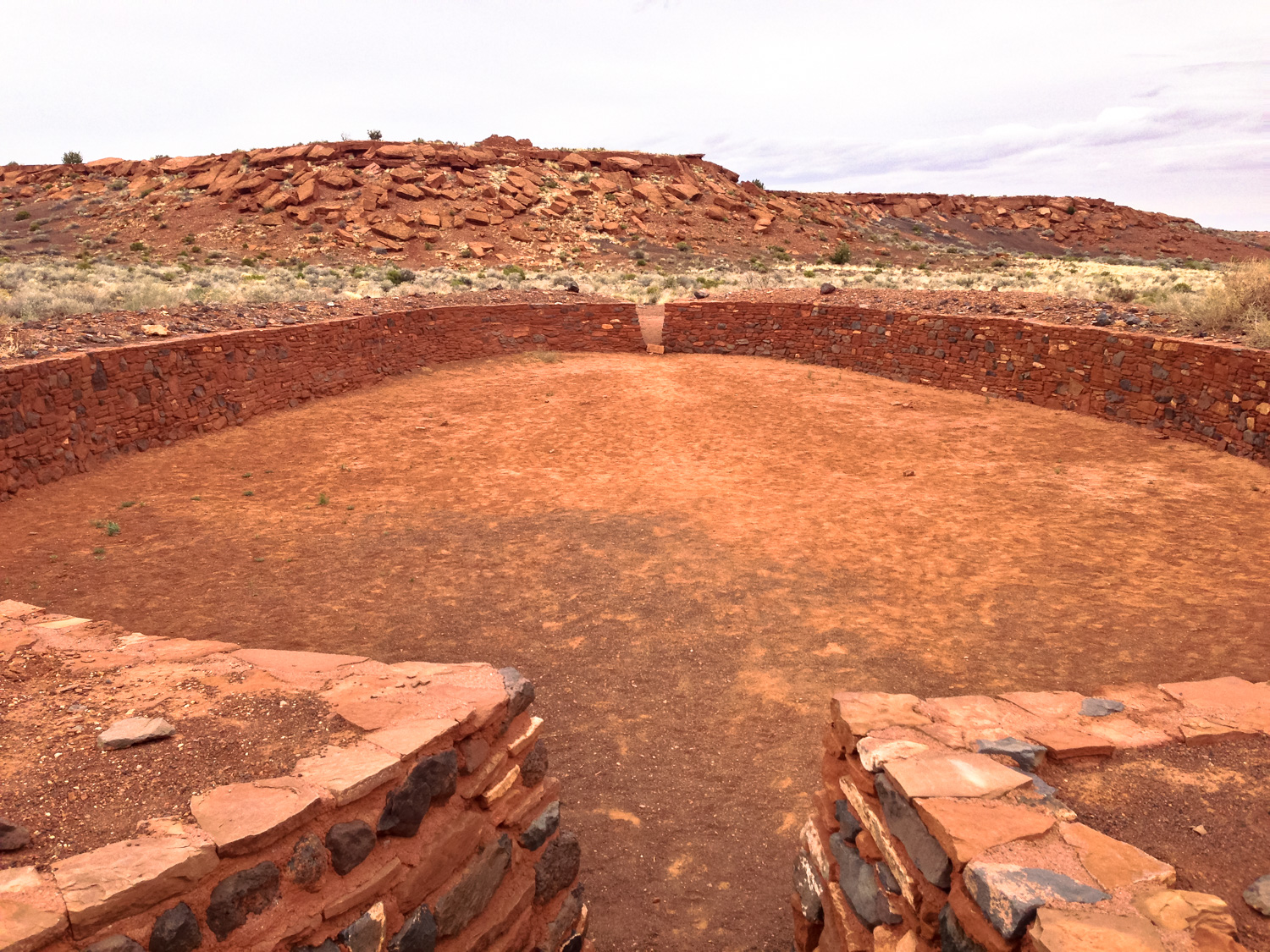 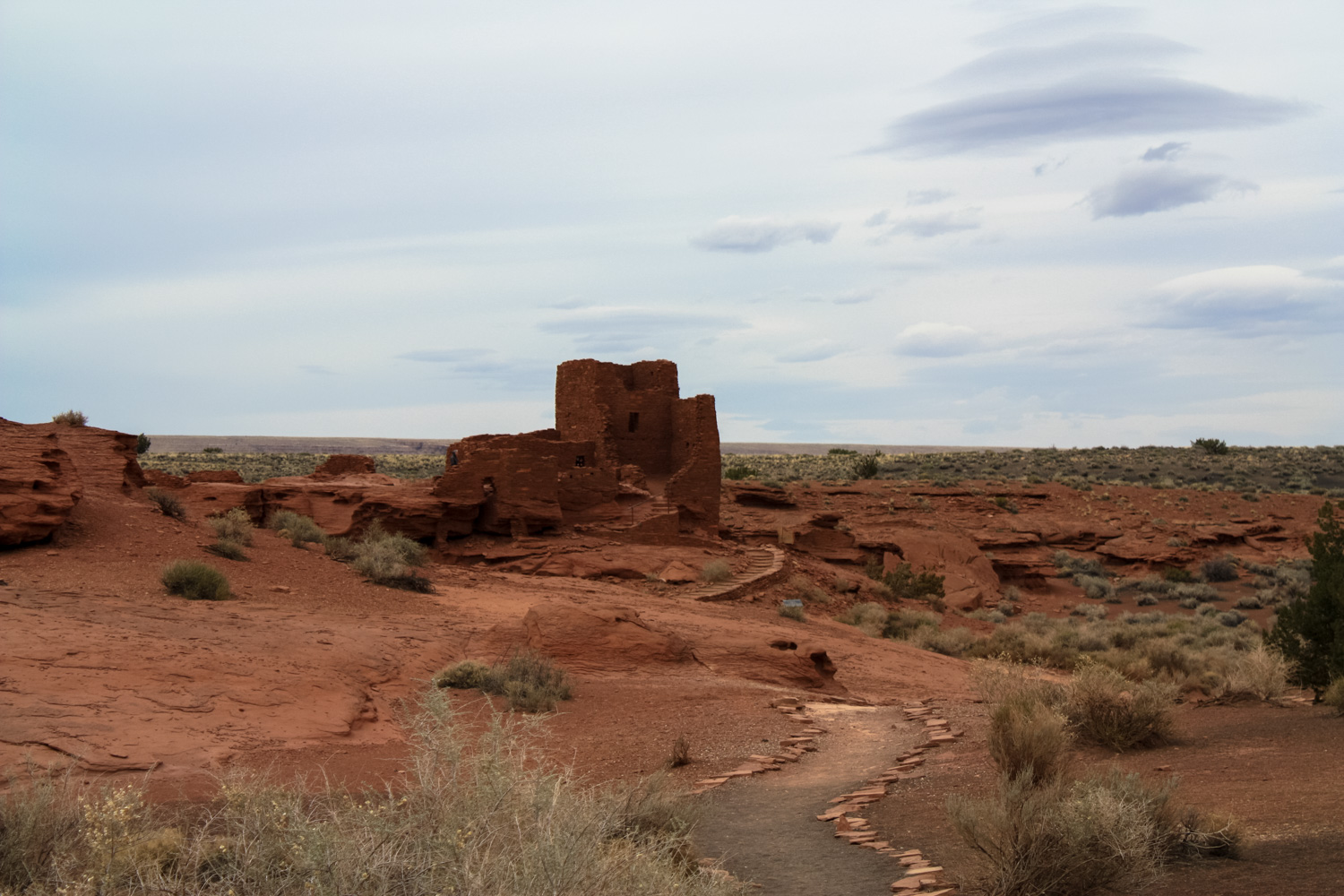 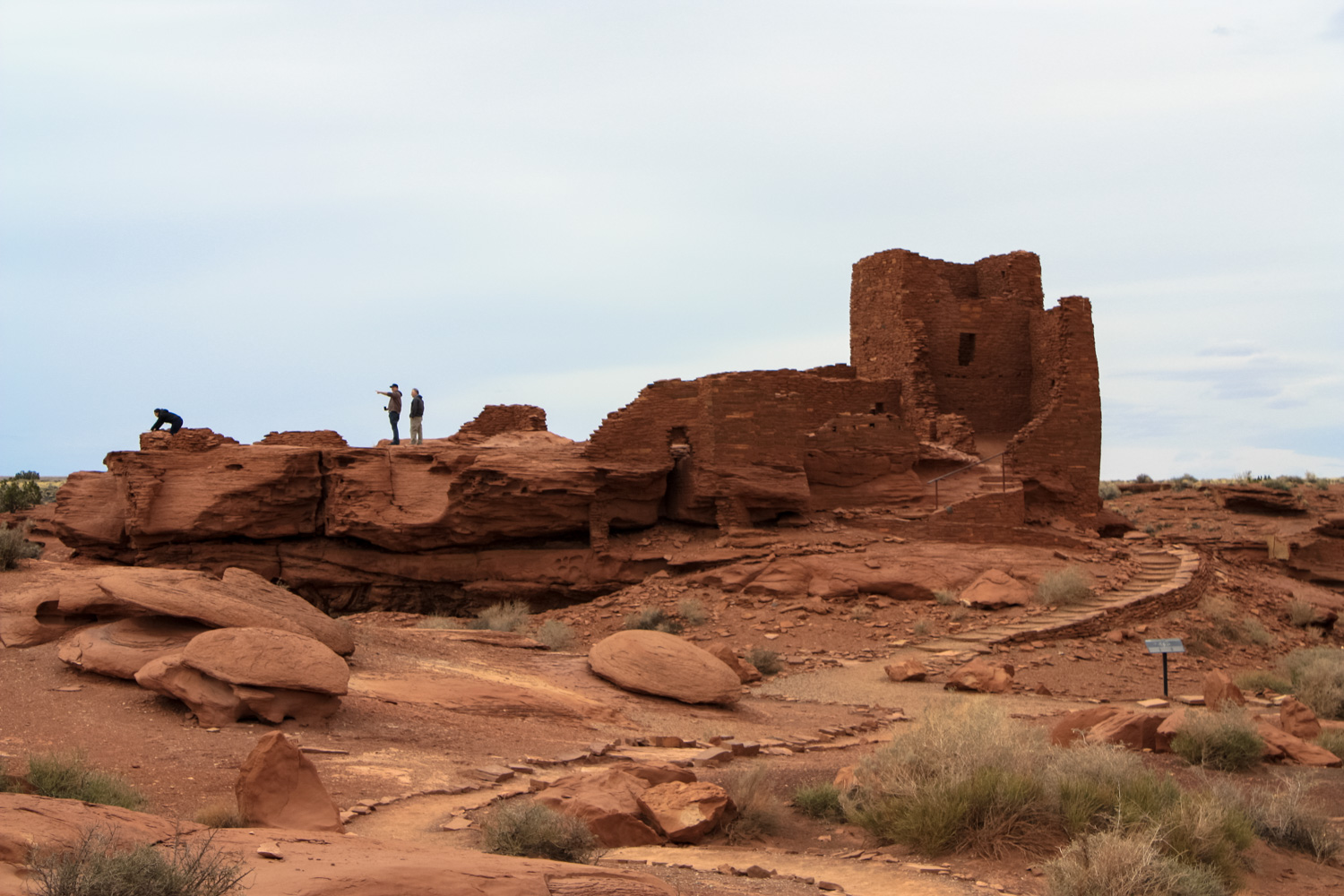 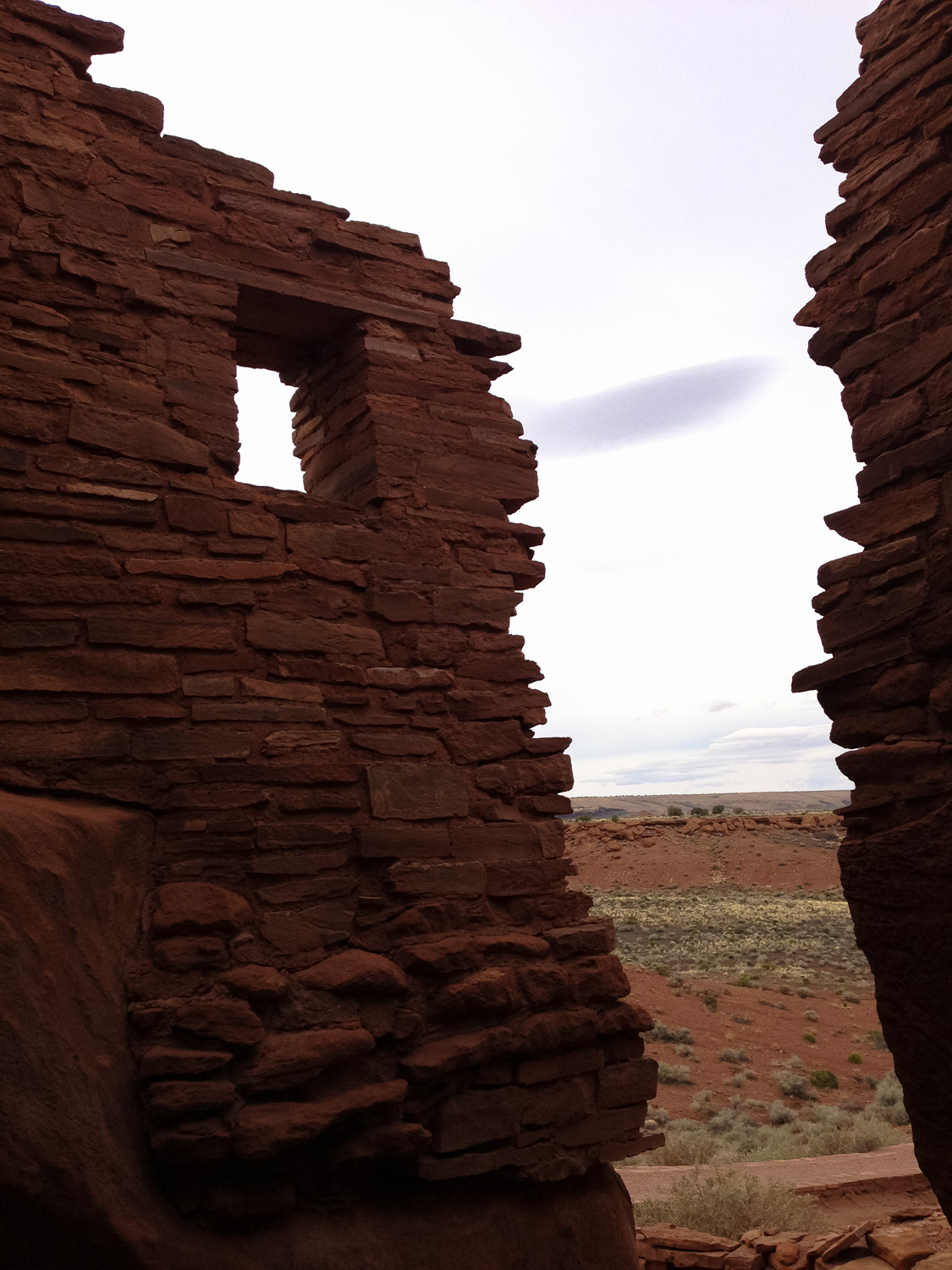 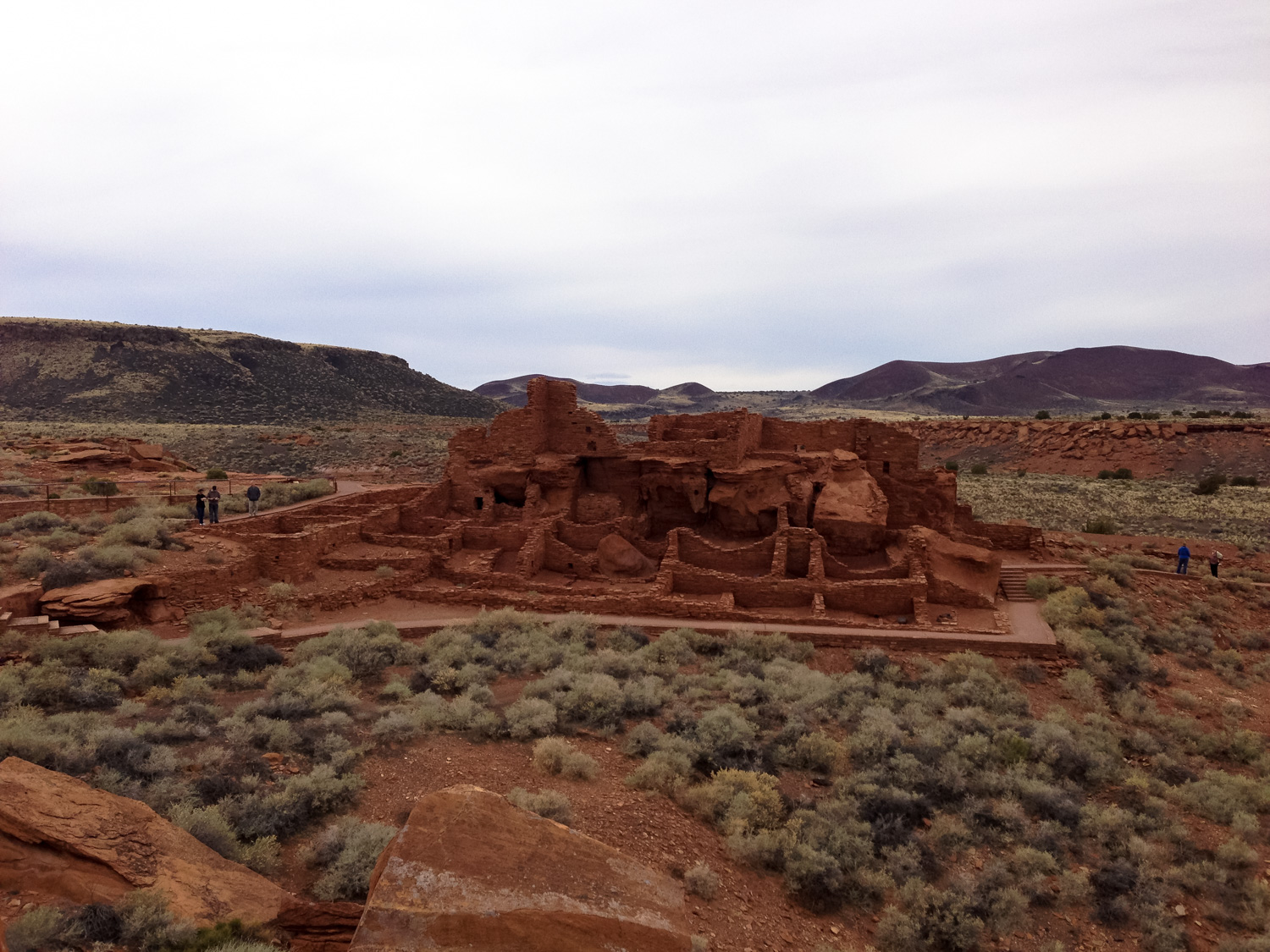 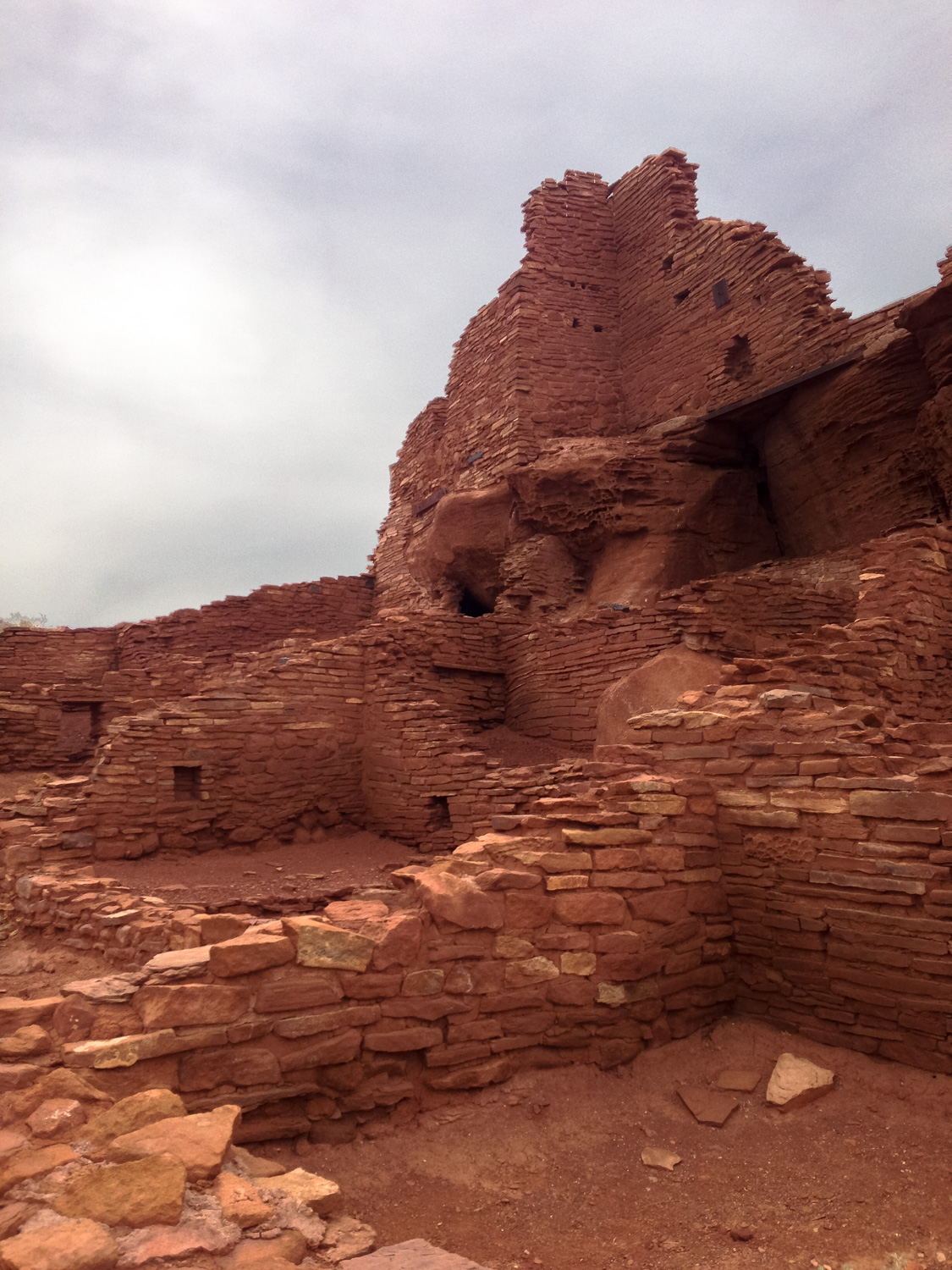 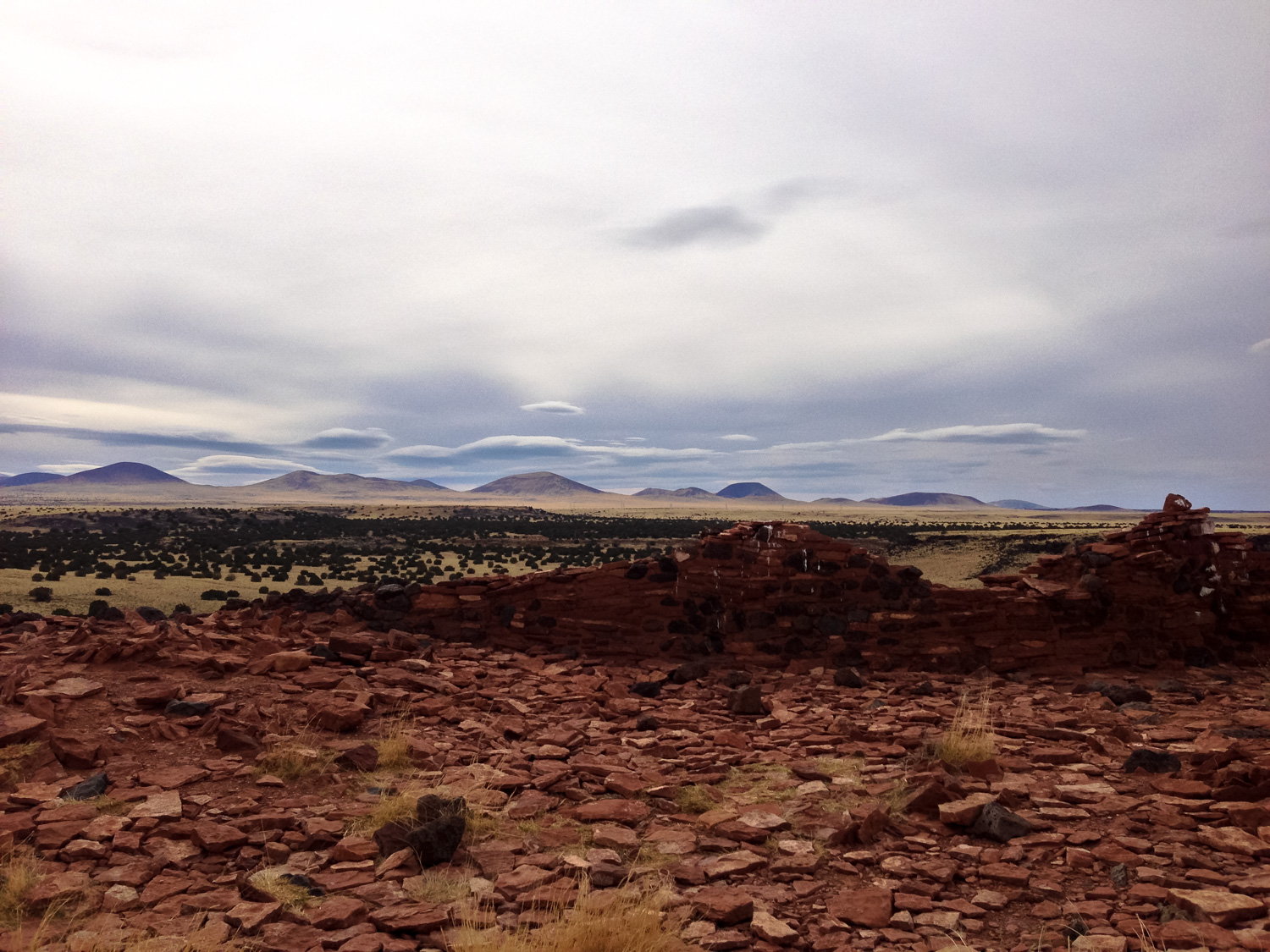 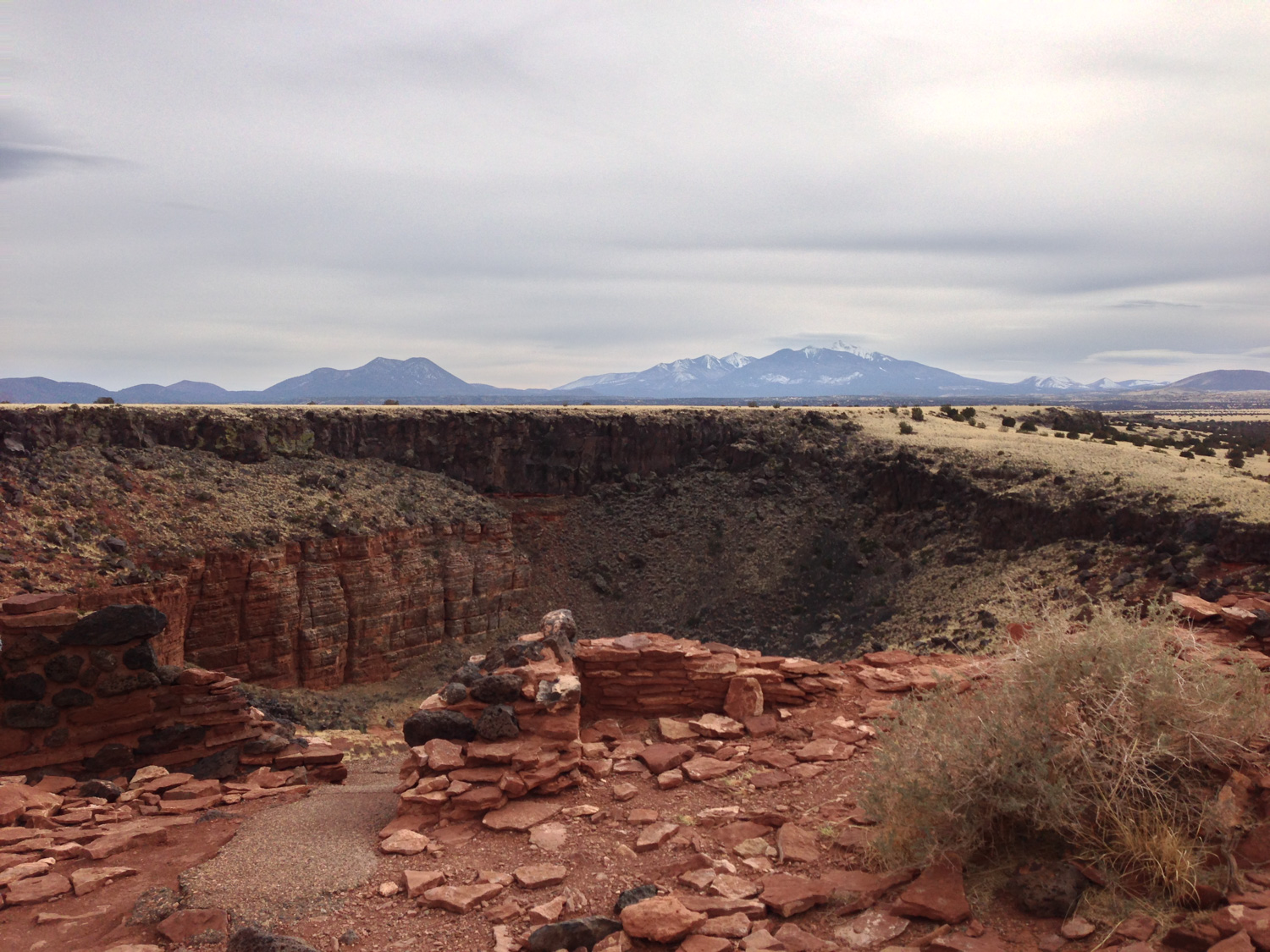 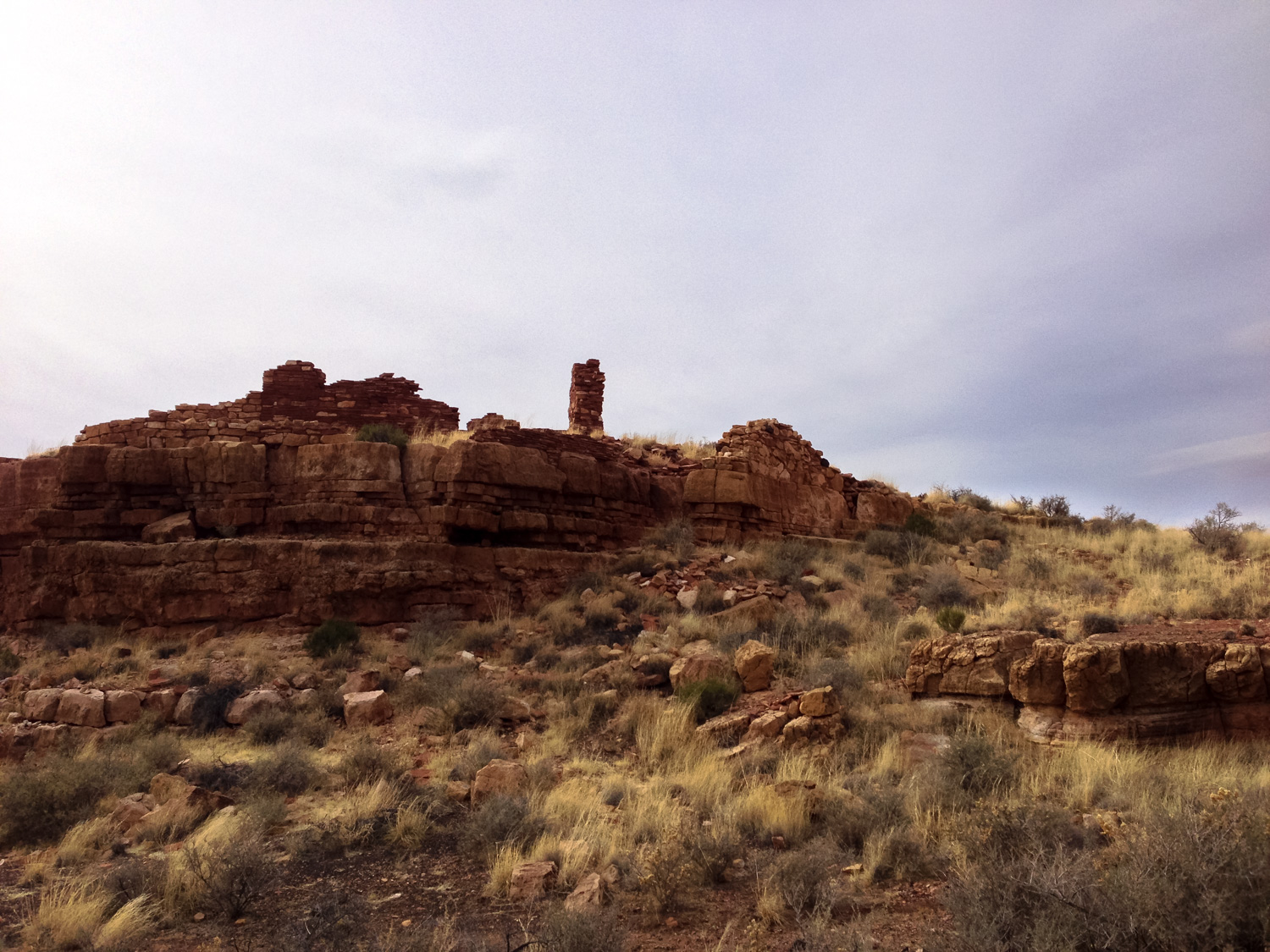 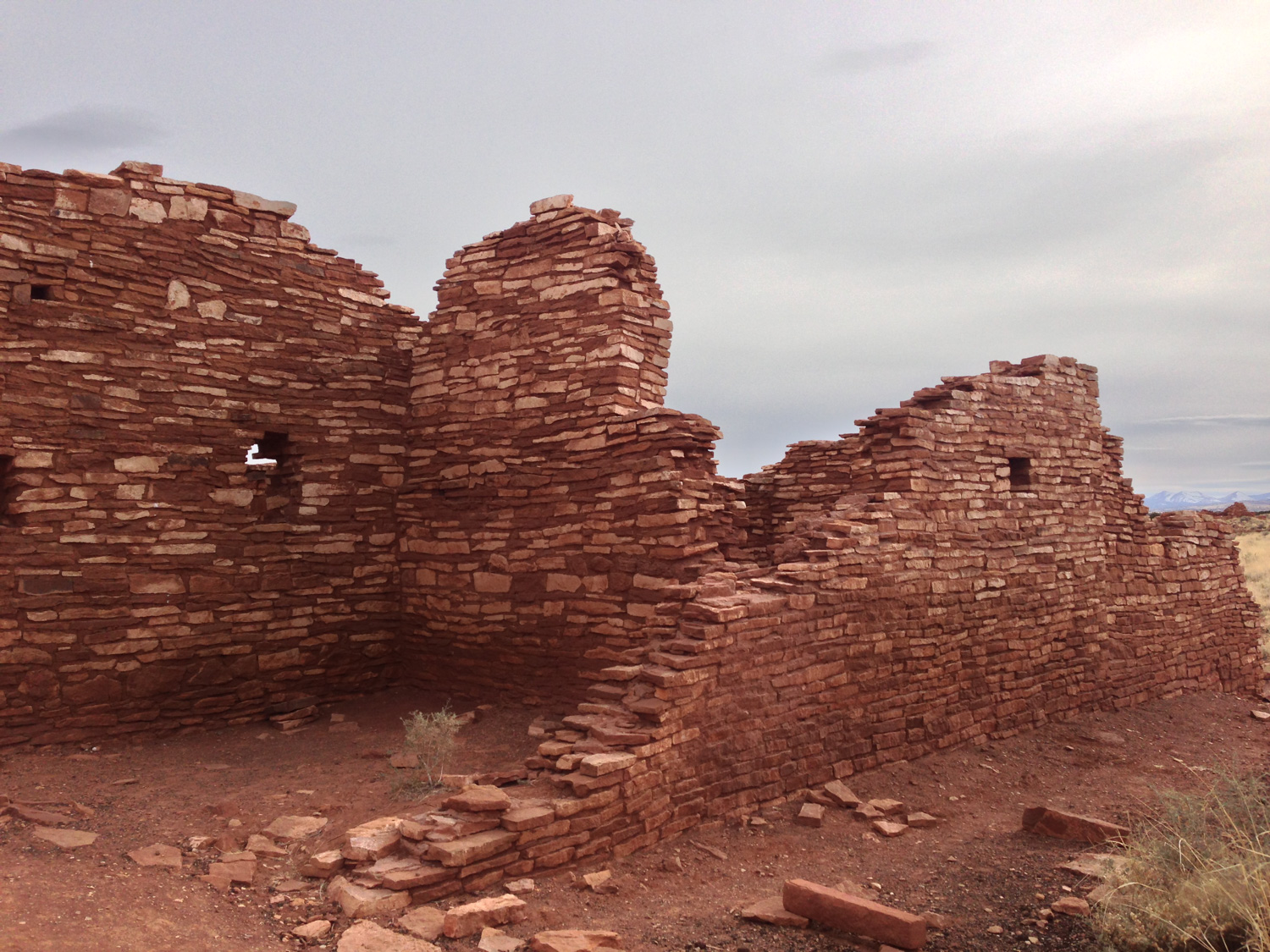 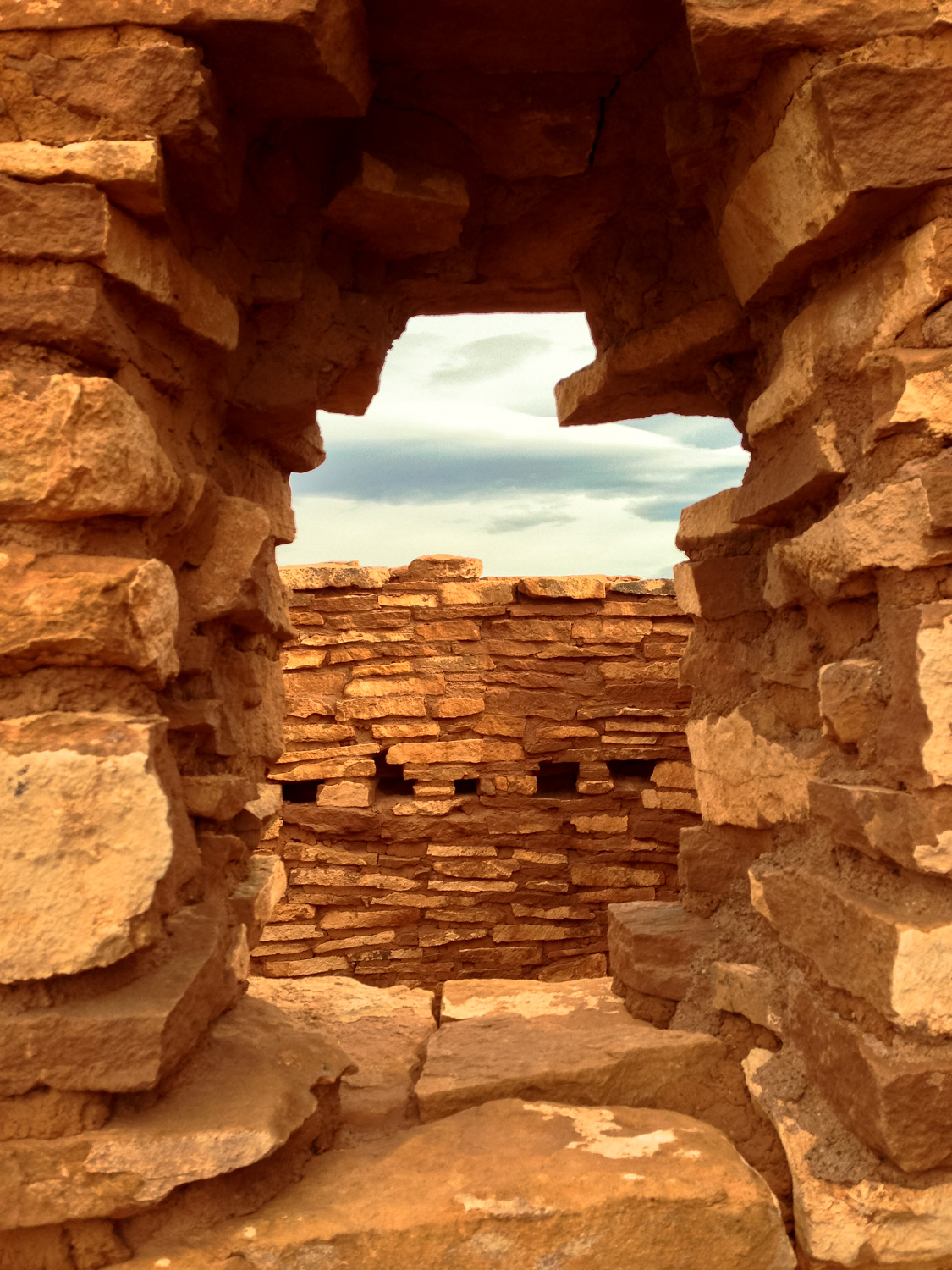 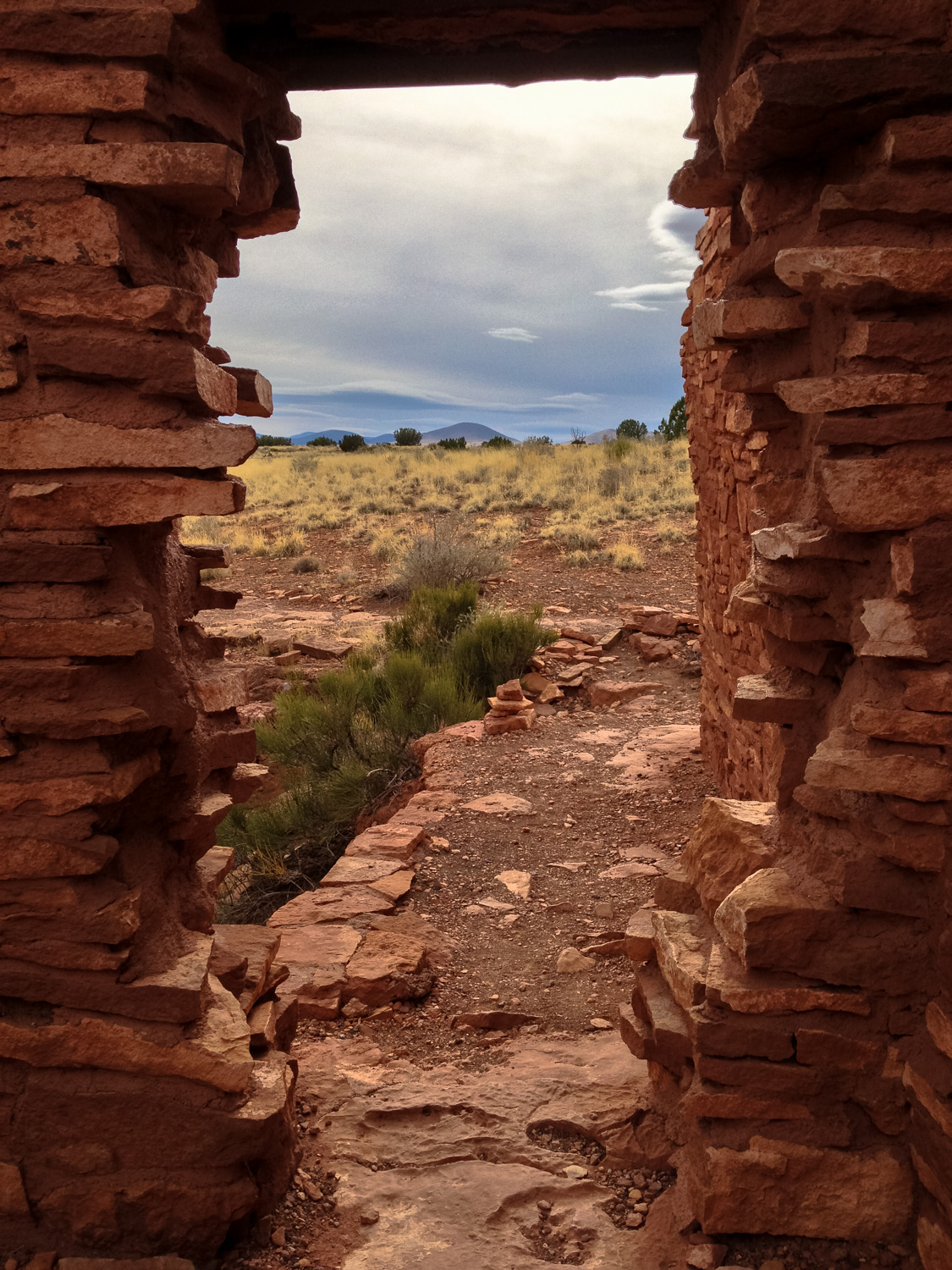 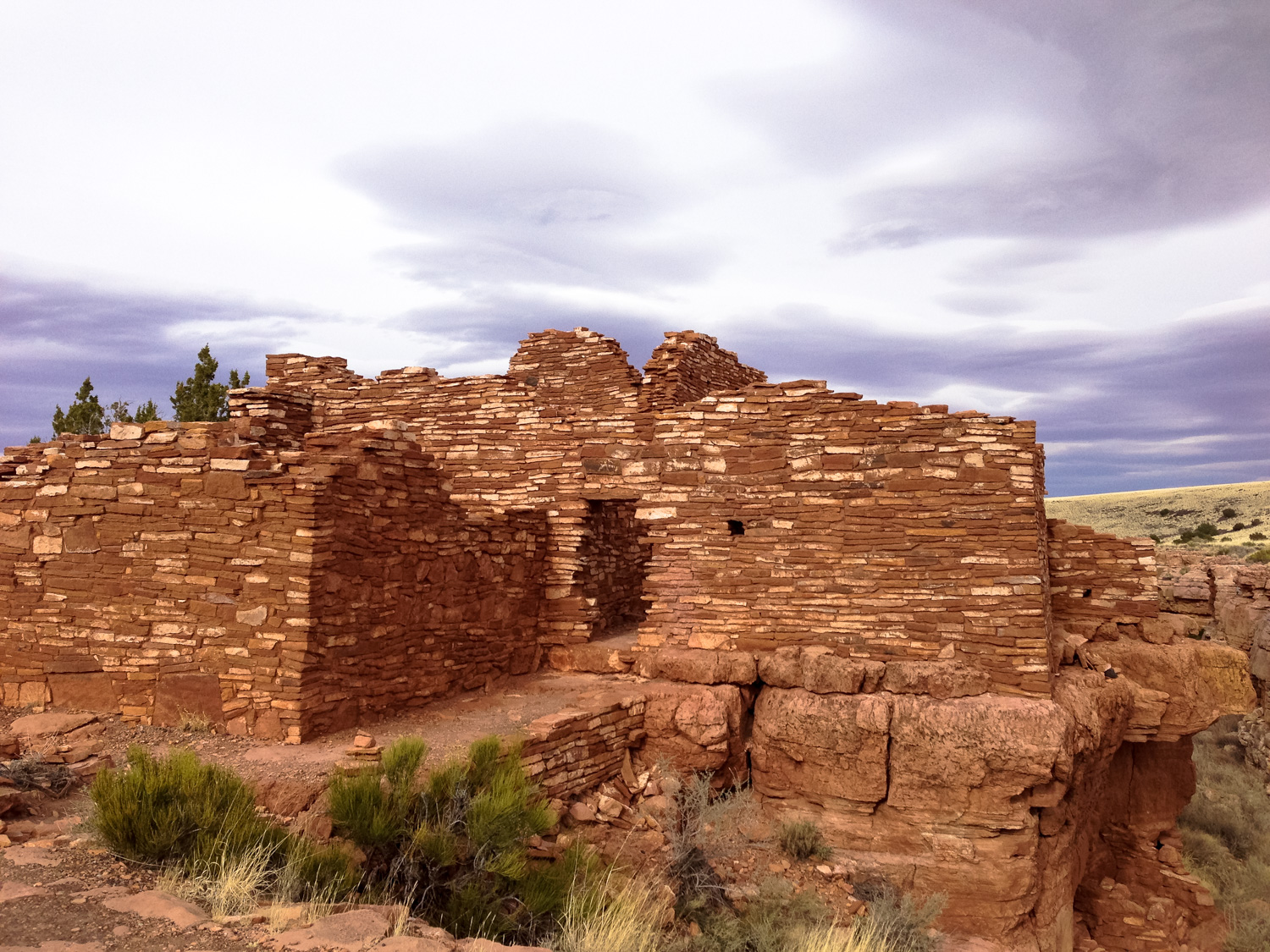 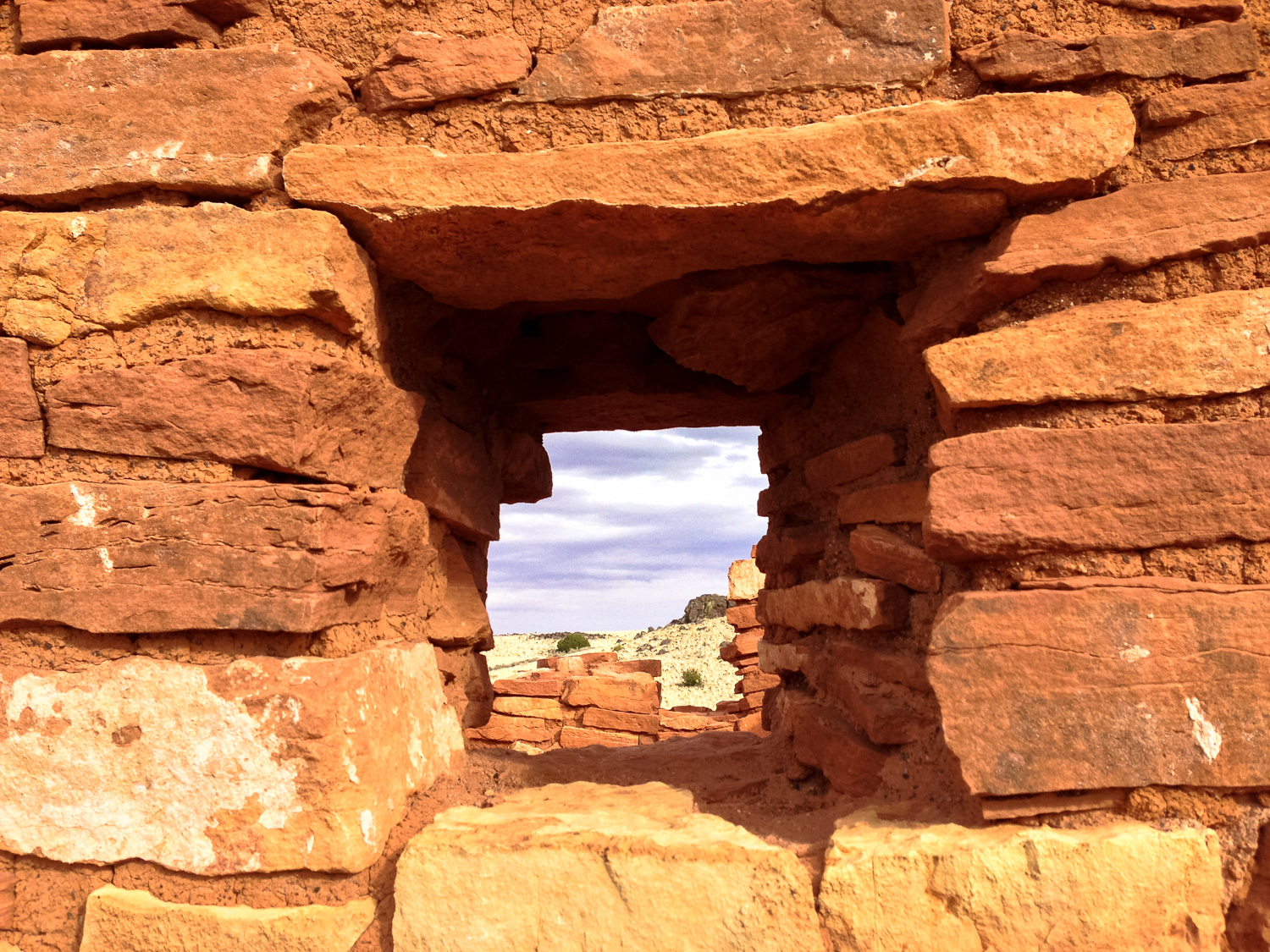 Trails are extremely well-maintained and in excellent conditions where they are present. There is no off-trail hiking allowed in Wupatki National Monument without a park ranger guide.

The nearest campsite is the Bonito Campground in nearby Sunset Crater Volcano National Monument. Bonito is generally open from May through October.

From Flagstaff, head north on US-89. We recommend reaching Wupatki counter-clockwise on Loop Road, passing through Sunset Crater Volcano National Monument. Loop Road is about 21 miles north from the beginning of US-89 (at the junction with historic Route 66). From this turn, it is approximately 21.2 miles to the visitor center.