Standing sentinel over the mouth of Zion Canyon, the Watchman formation is both an unmistakable landmark and the object of much photographic scrutiny. Most people photograph and admire the Watchman from the Pa’rus Trail and the Canyon Junction bridge as they hope to frame the iconic sunset shot with the Virgin River in the foreground. For an even more dramatic look at the Watchman, as well as several other iconic canyon icons like the West Temple, Altar of Sacrifice, Sundial, and Towers of the Virgin, consider this moderate trail to a view-packed plateau overlooking the bustling Zion Canyon Visitor Center area. 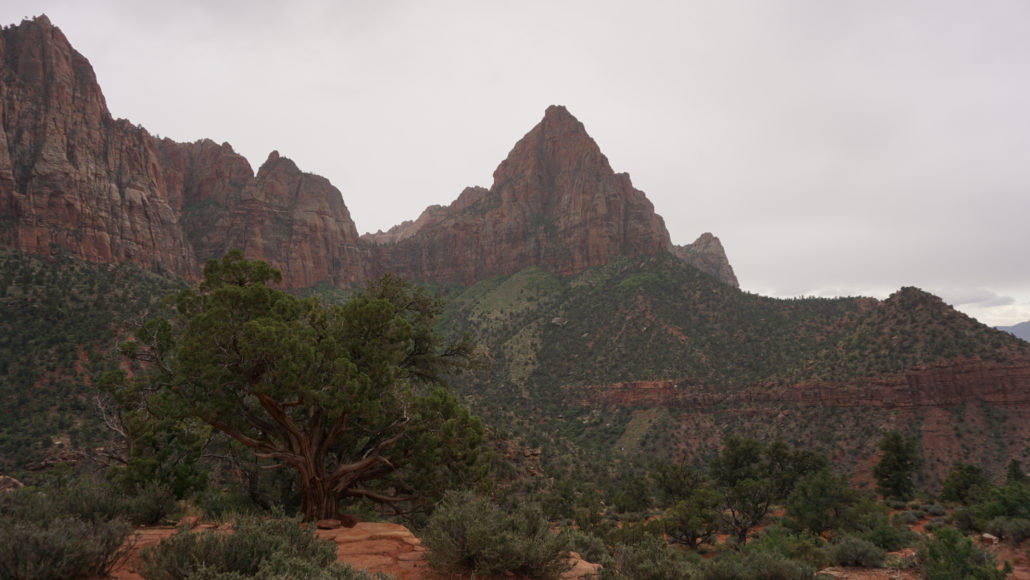 The trail begins directly across from the visitor center via a trailhead on the eastern banks of the Virgin River. The opening stretch closely parallels the river heading north before turning to the east to cross an access road twice at 0.25 mile and 0.4 mile. There’s one final crossing of a dry streambed at 0.5 mile before the trail settles into an uphill groove through a deep, amphitheater-like canyon. 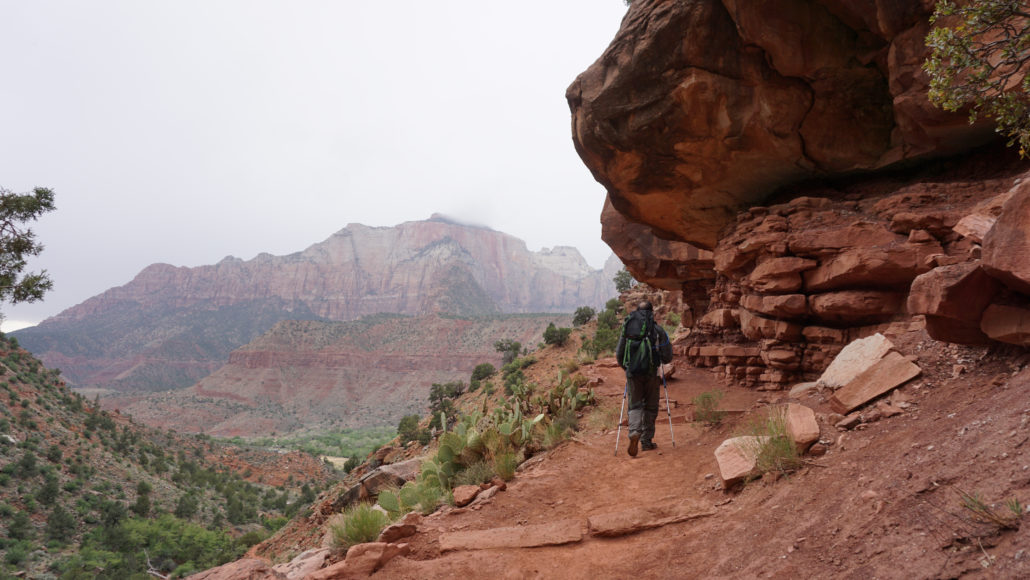 Continue along a moderate incline through several switchbacks carved directly into the cliffside. Interpretive panels identifying rare and unusual plants are scattered here and there along the trail. At 0.75 miles, the trail begins to arc to the south along the headwall of the canyon, passing over several lush pockets of vegetation nourished by seeps. Water may run through hearing during rain storms, but there’s typically only moist soil or small surface puddles. 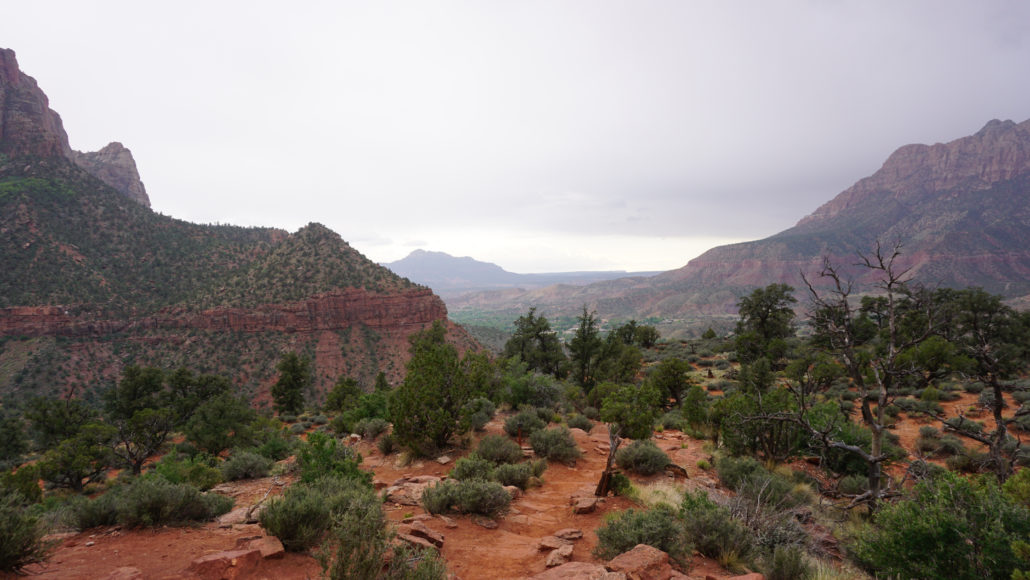 After completing the arc, the trail now heads west and uphill toward a junction with a short loop atop a plateau at 1.3 miles. Both branches of the looping route encircle the plateau to reach a viewpoint about halfway through the loop. From this viewpoint, you can tiptoe to the edge of a cliff and scan a panorama that includes most of Zion Canyon’s southern highlights: West Temple, East Temple, the Watchman, the visitor center, the lush corridor of riparian vegetation indicating the course of the Virgin River, the Beehives, the Altar of Sacrifice, the Towers of the Virgin, and the Streaked Wall. 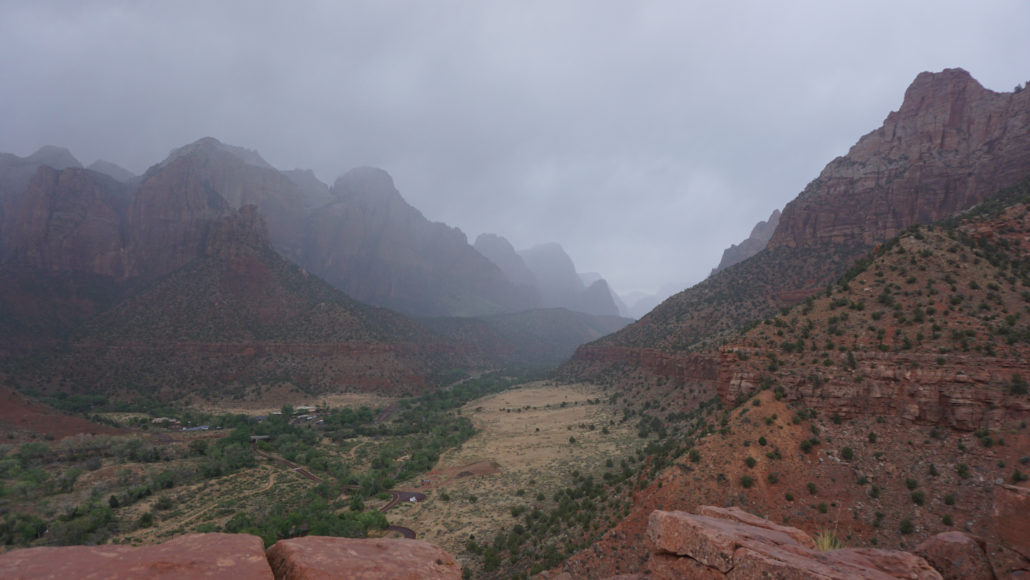 Late evening and sunsets are nice times to take this hike. South of the Watchman, the canyon opens up to the southwest, and the late evening light from the sinking sun paints the canyon’s eastern walls in golden light. At most places within the canyon, the walls block this light out, and for this reason most of Zion Canyon isn’t a great place for sunsets. The Watchman Trail lookout is an exception. Just be sure to bring a headlamp so you don’t trip and fall on the way down.

Accommodations near The Watchman Trail 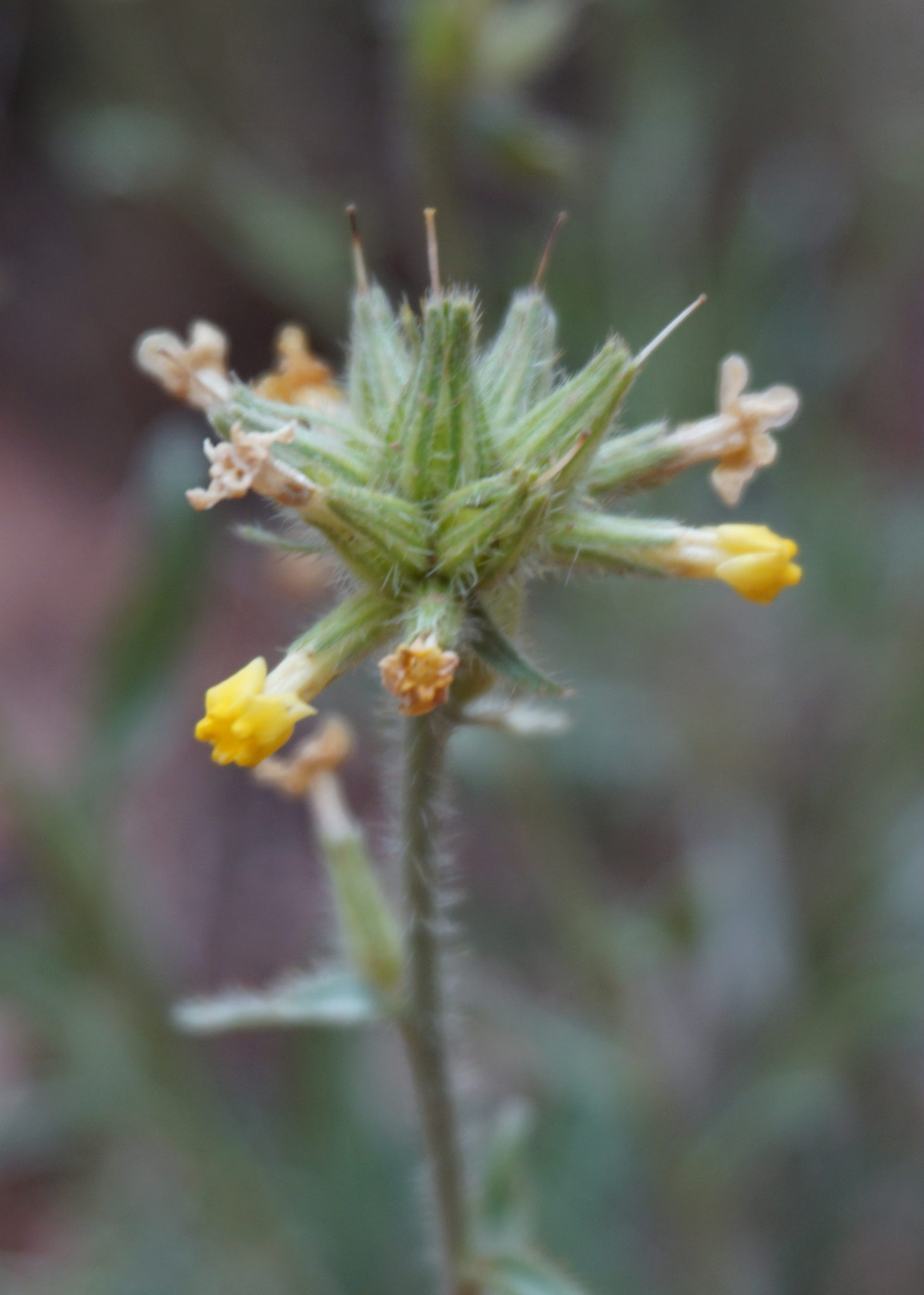 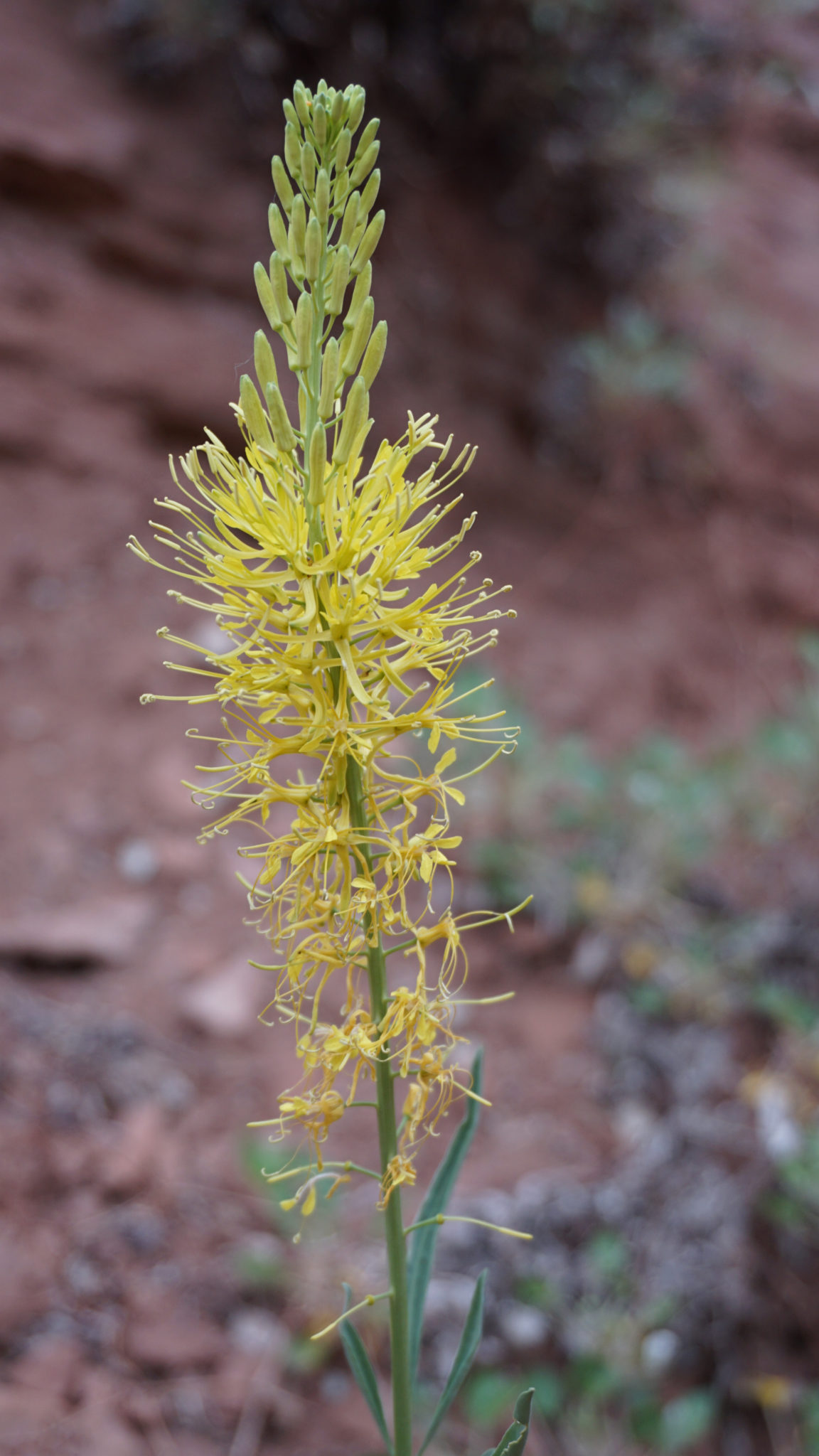 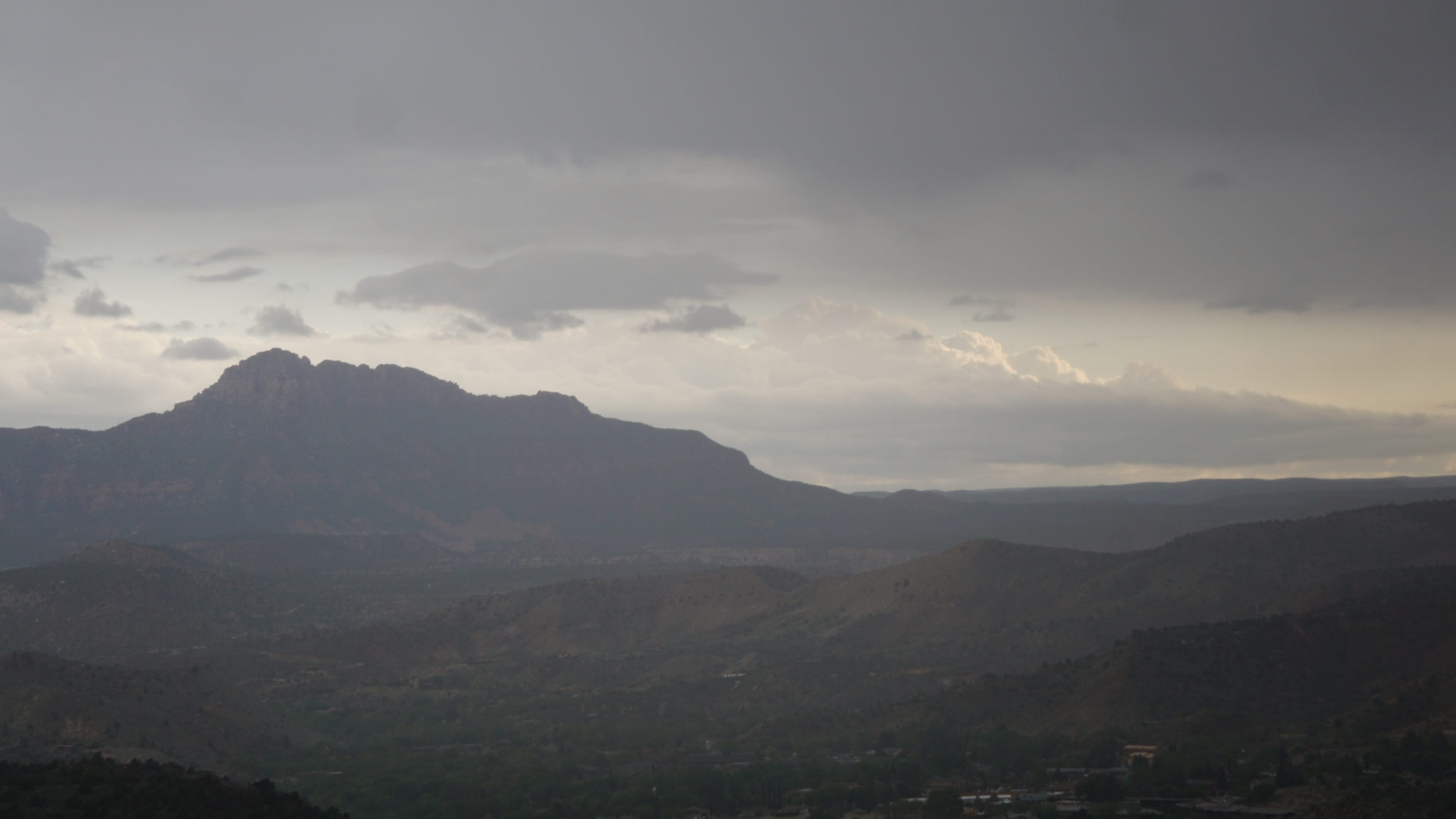 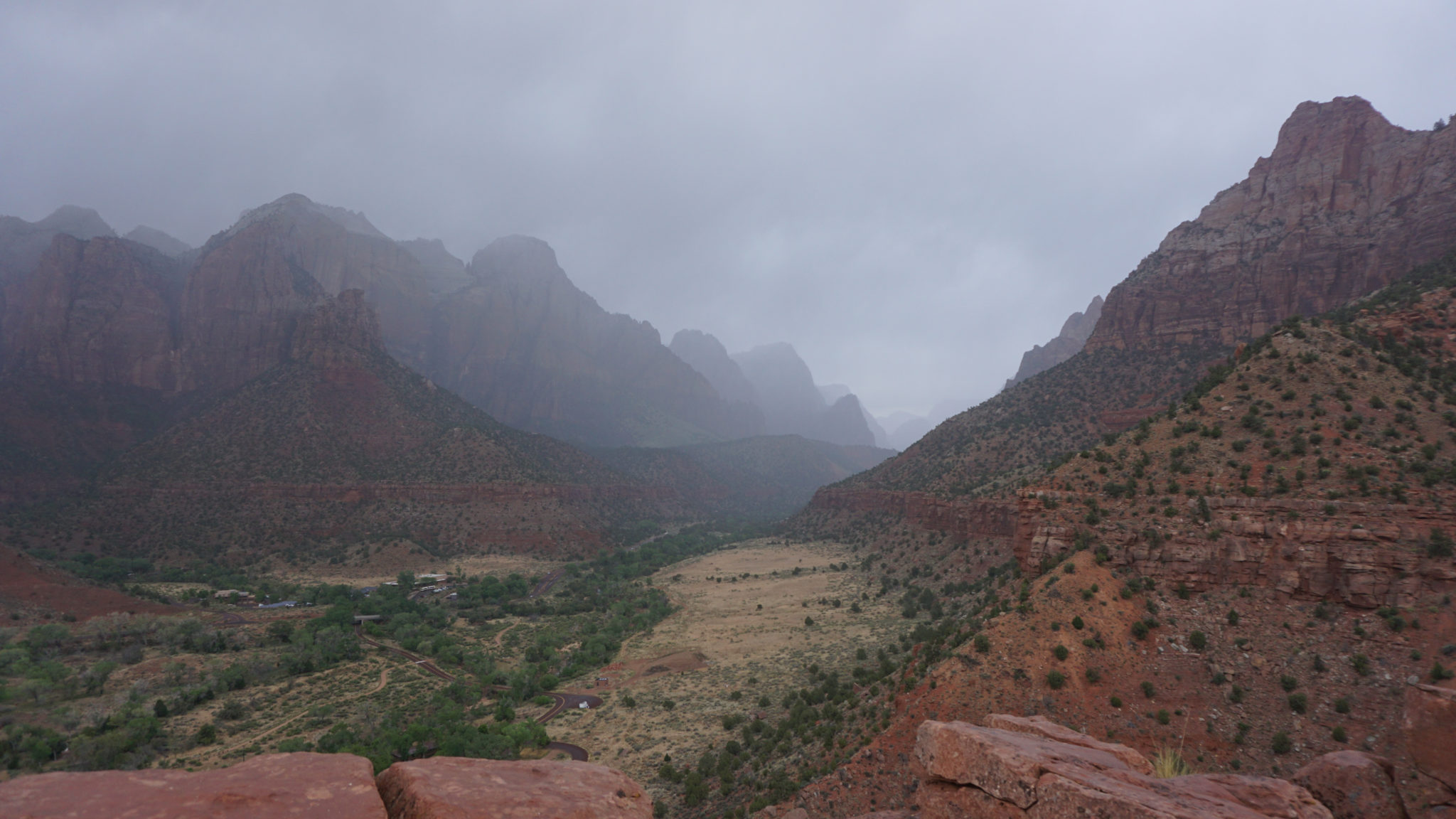 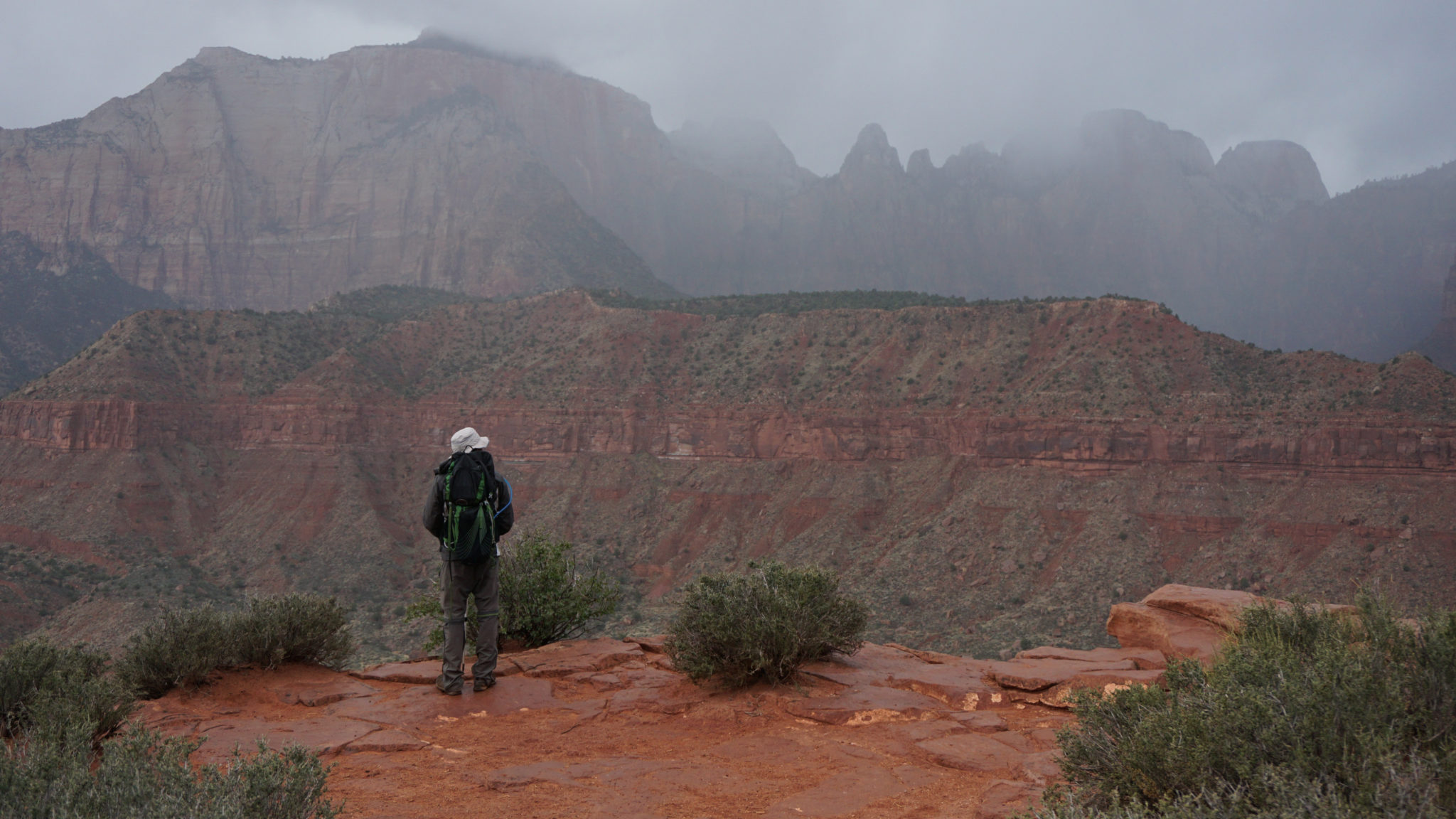 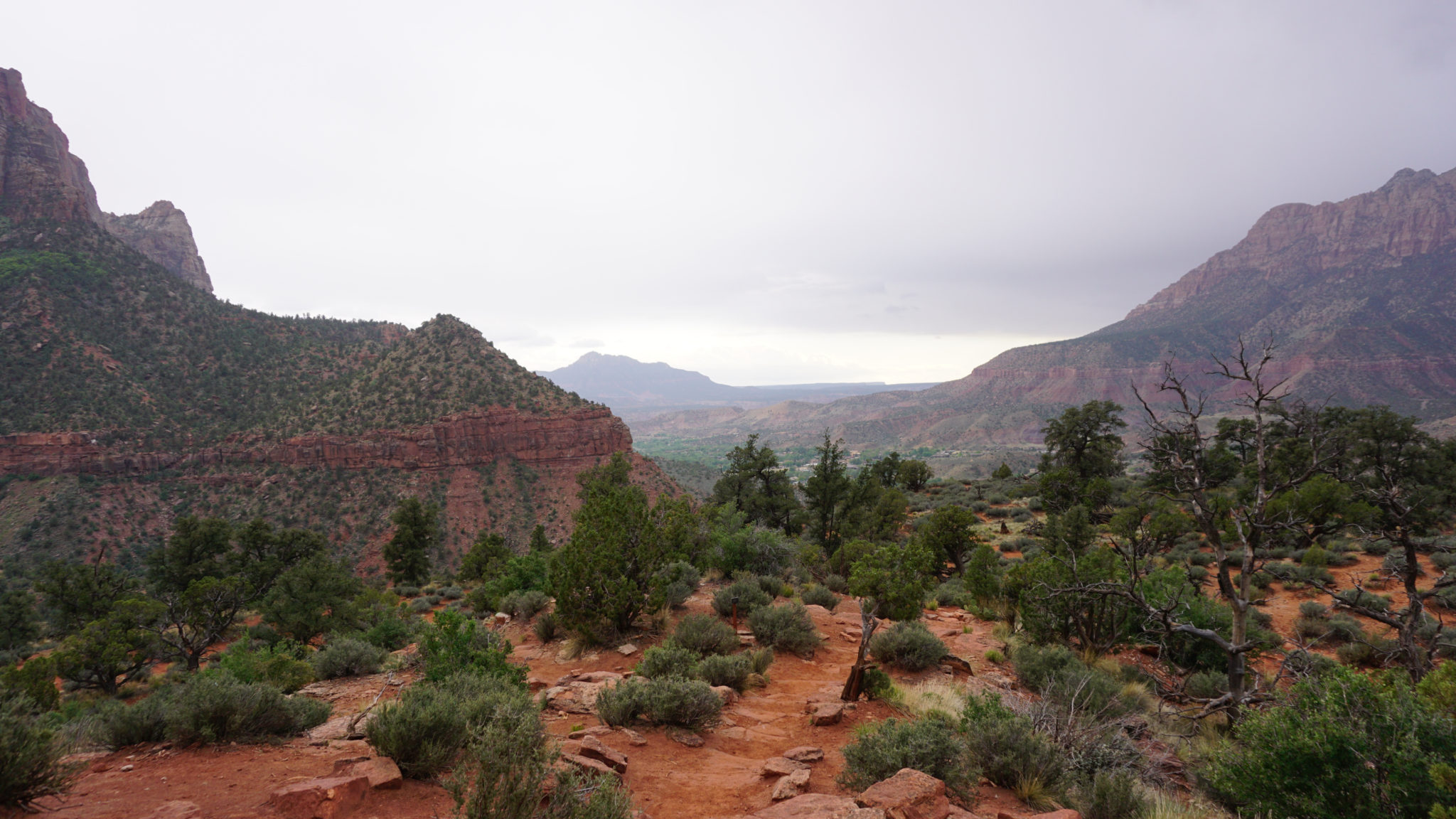 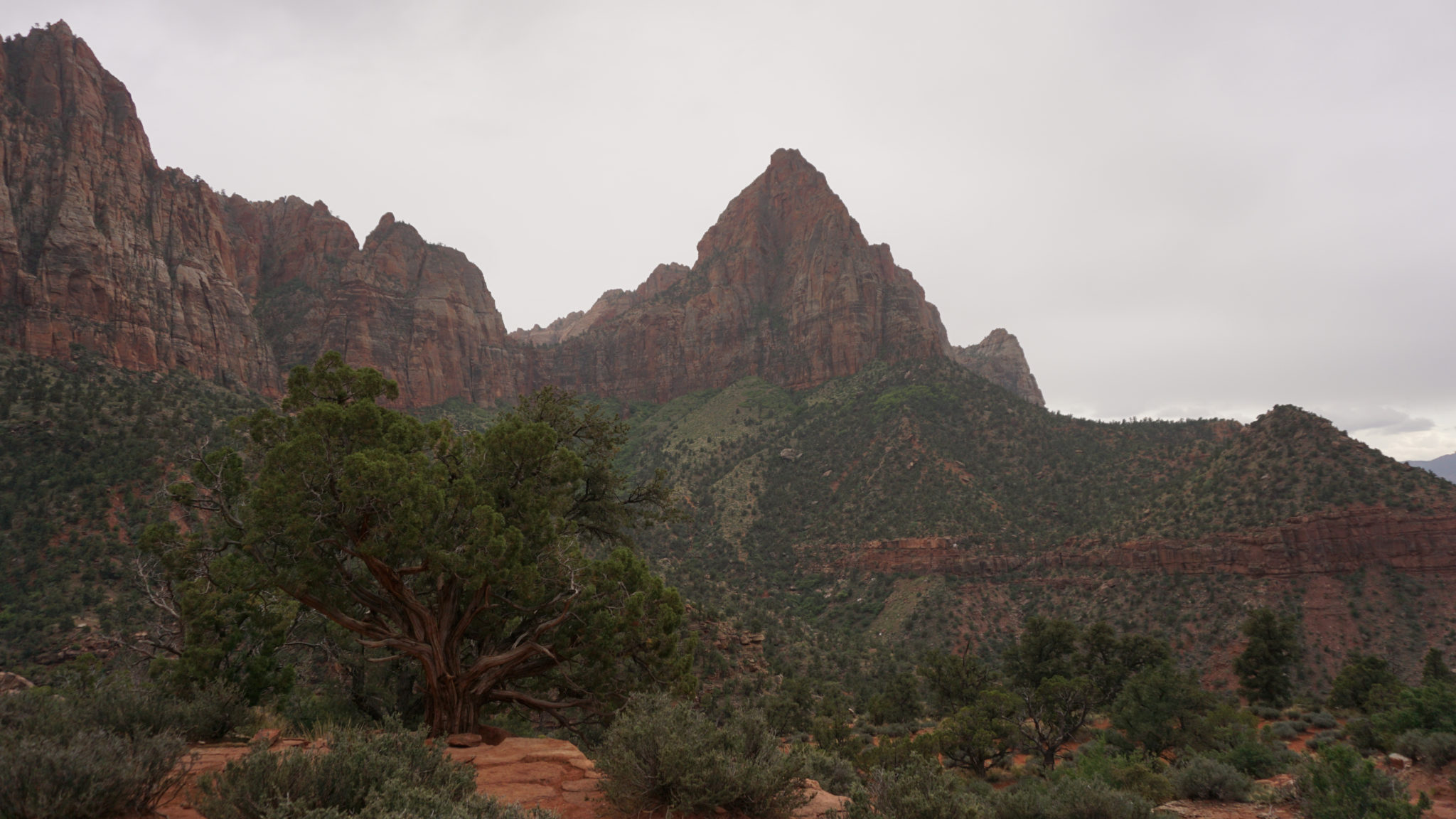 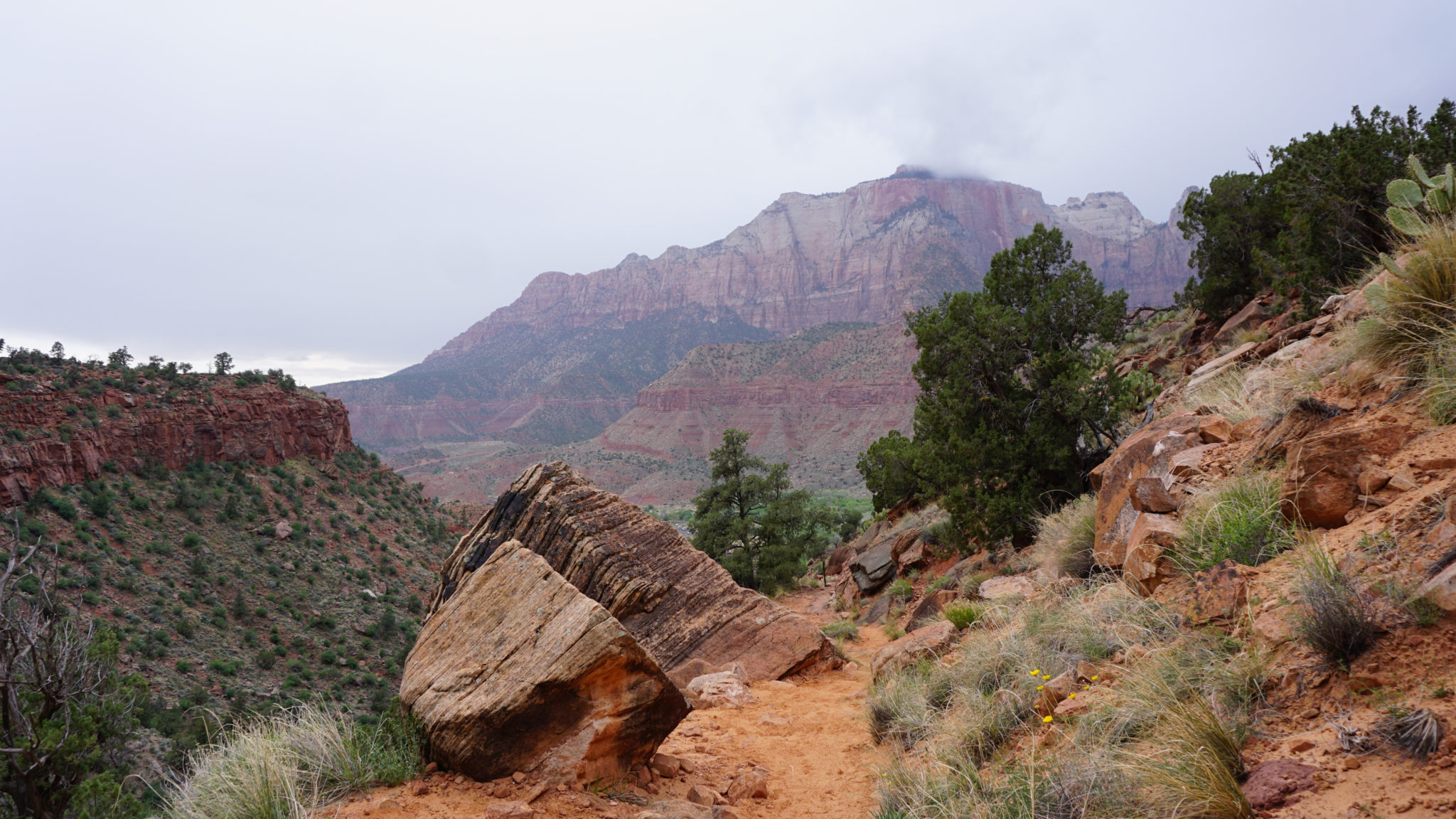 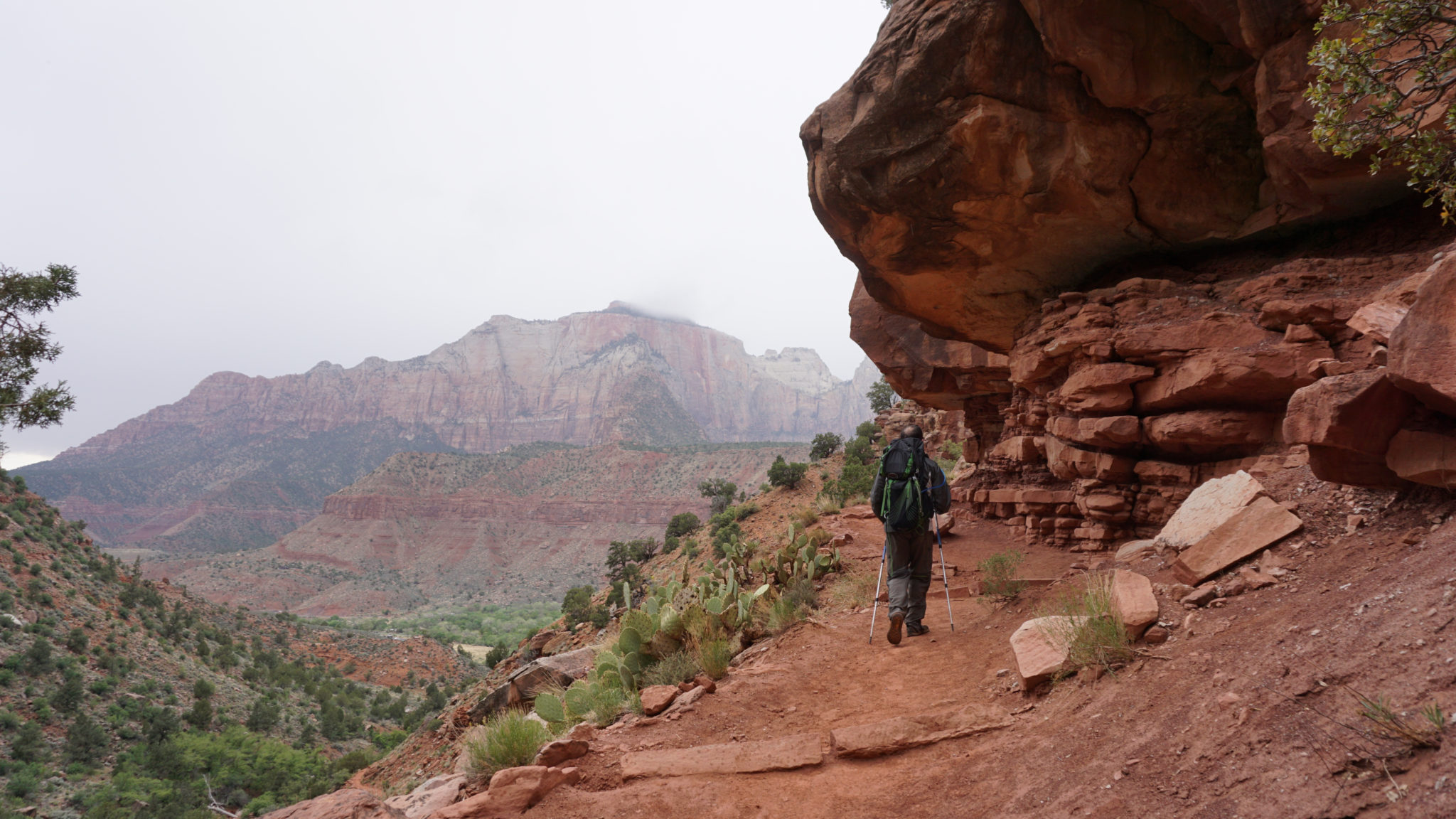 The trail is in good shape and easy to follow, but it can become a bit of a mess when it rains.

The nearest campground is, appropriately, the Watchman Campground near the Zion Canyon Visitor Center.

From St. George, head north to the UT-9 West exit, and take UT-9 west toward Springdale and Virgin. Continue for 40.5 miles through Springdale to the Zion National Park Entrance. Pass through the entrance and pay your fee, and after 0.2 mile, turn right into the Visitor Center parking lot. The trail is directly across from the shuttle parking area on the east side of the Virgin River.