Topping out at a “mere” 2,801 feet, Sycuan Peak nevertheless offers some of the most impressive views in the southern half of San Diego County. The short, steep route up to the top via an abandoned jeep road wastes little time in reaching the summit, making Sycuan Peak an optimal spot to enjoy the sunrises for which San Diego deserves for more notoriety. On cool spring days, you can enjoy the experience pushing through the marine layer’s characteristic pea soup before punching through the cloud deck to stand upon a rocky island surrounded by a sea of cotton. 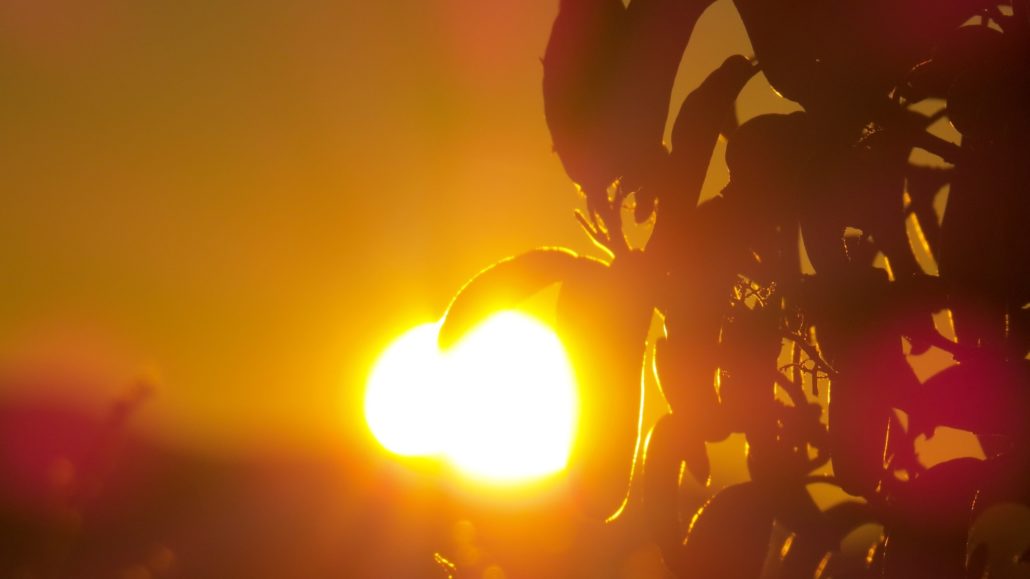 The summit once housed an airway beacon that helped guide planes before the days of reliable radar and radio systems supplanted line of sight navigation. Disused electrical lines and a marker on older topographic maps are the only remnants of the beacon. The summit views, which span the western half of the county from the Cuyamaca Mountains to Pt. Loma and extend as far north as Mt. San Jacinto, offer clues as to why this particular location served as a beacon. 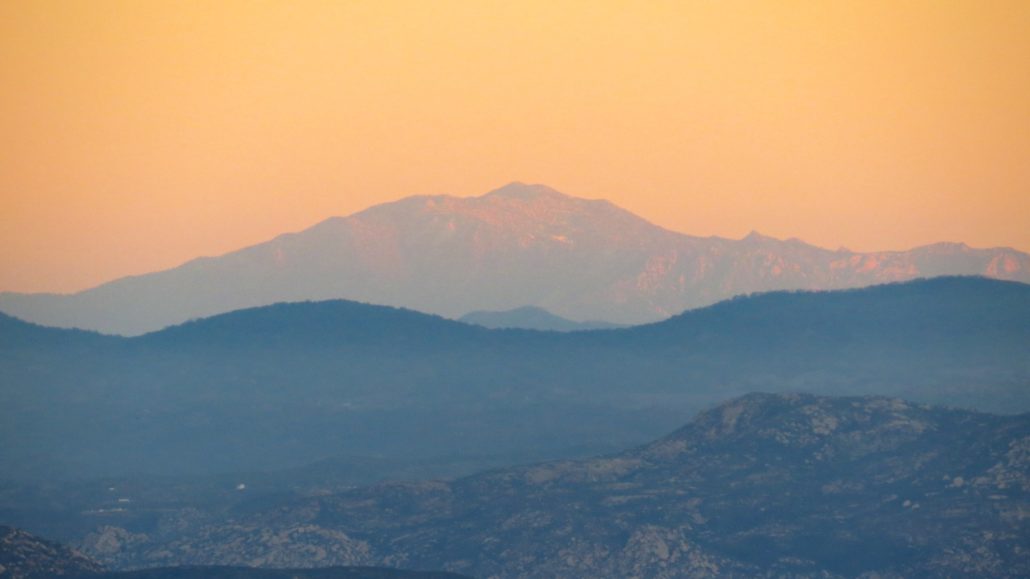 The route to the top is simple enough. Follow the steep, rutted jeep trail, occasionally circumventing some heavily eroded sections along the most even ground available, until you reach the rocky summit. The views east, south, and west improve steadily as you climb, and if you take the hike in the morning with the right time, the orange glow of the sun will cast the rugged mountains to the east in silhouette while the clouds above turn vivid shades of red, pink, purple, orange, and gold. 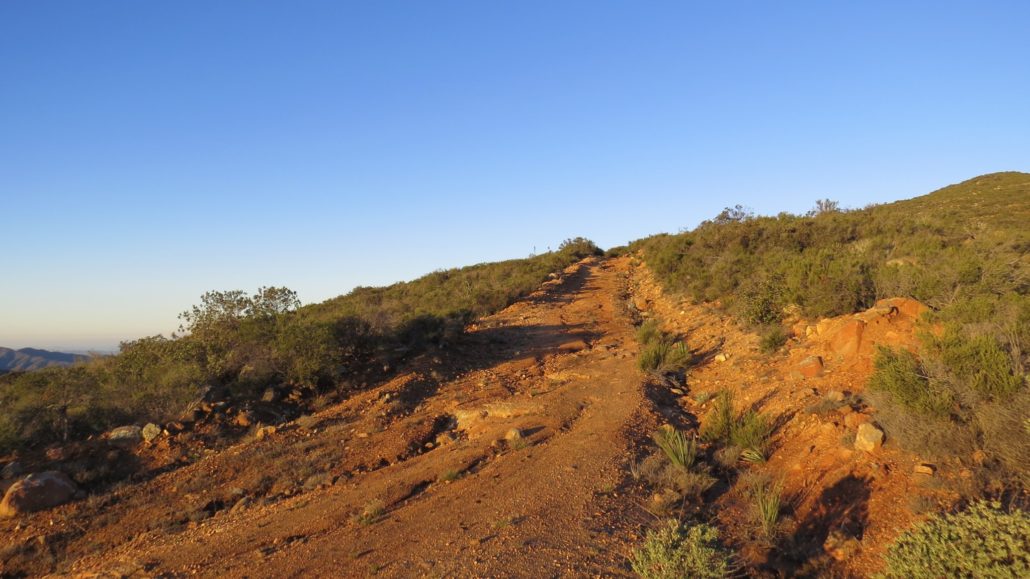 Just before the top, the jeep trail passes through patches of Cleveland sage. This somewhat less common variety of sage – at least relative to black and white sage – suffuses the air with an intoxicating fragrance unmatched in the chaparral belt. Just as the grade begins to mellow out, there’s one last short push before reaching the rocky summit. 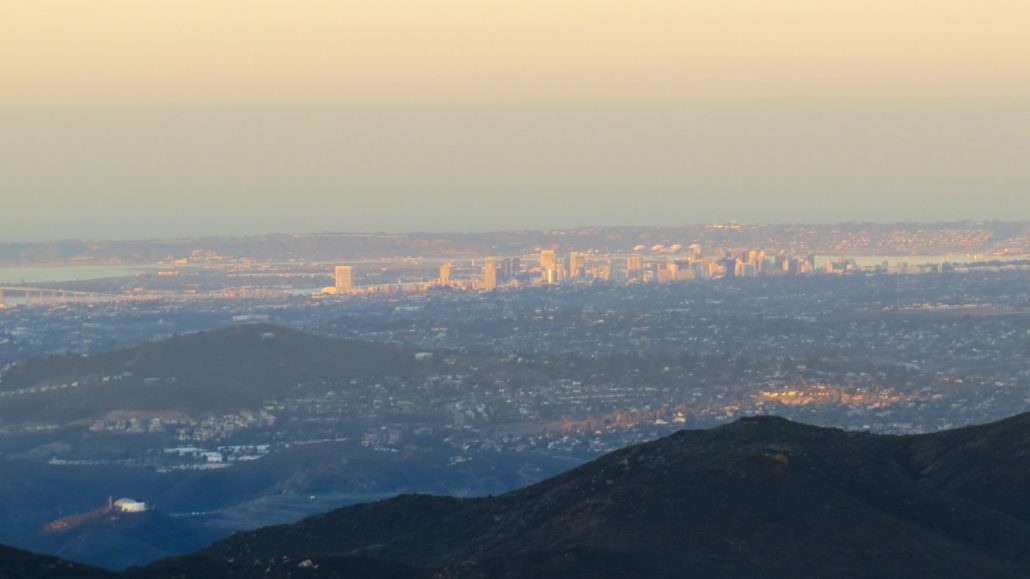 In addition to the sunrise, sunsets would be equally good here. The view over the city of San Diego is just as good as over the eastern mountains. Whether you are coming for the start or the end of the day, be sure to pack along a headlamp to help you negotiate some of the trickier sections of the decrepit old jeep road. 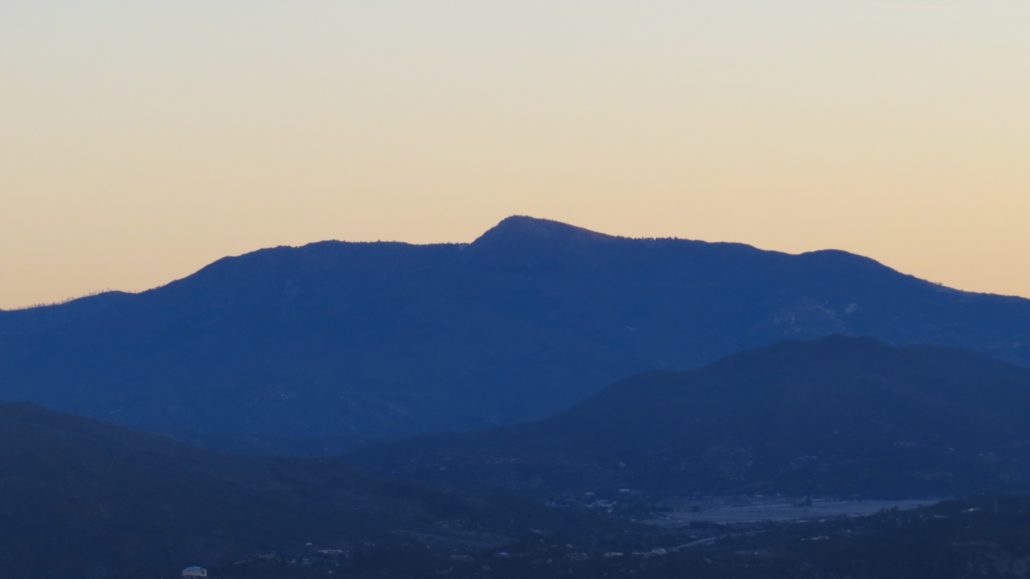 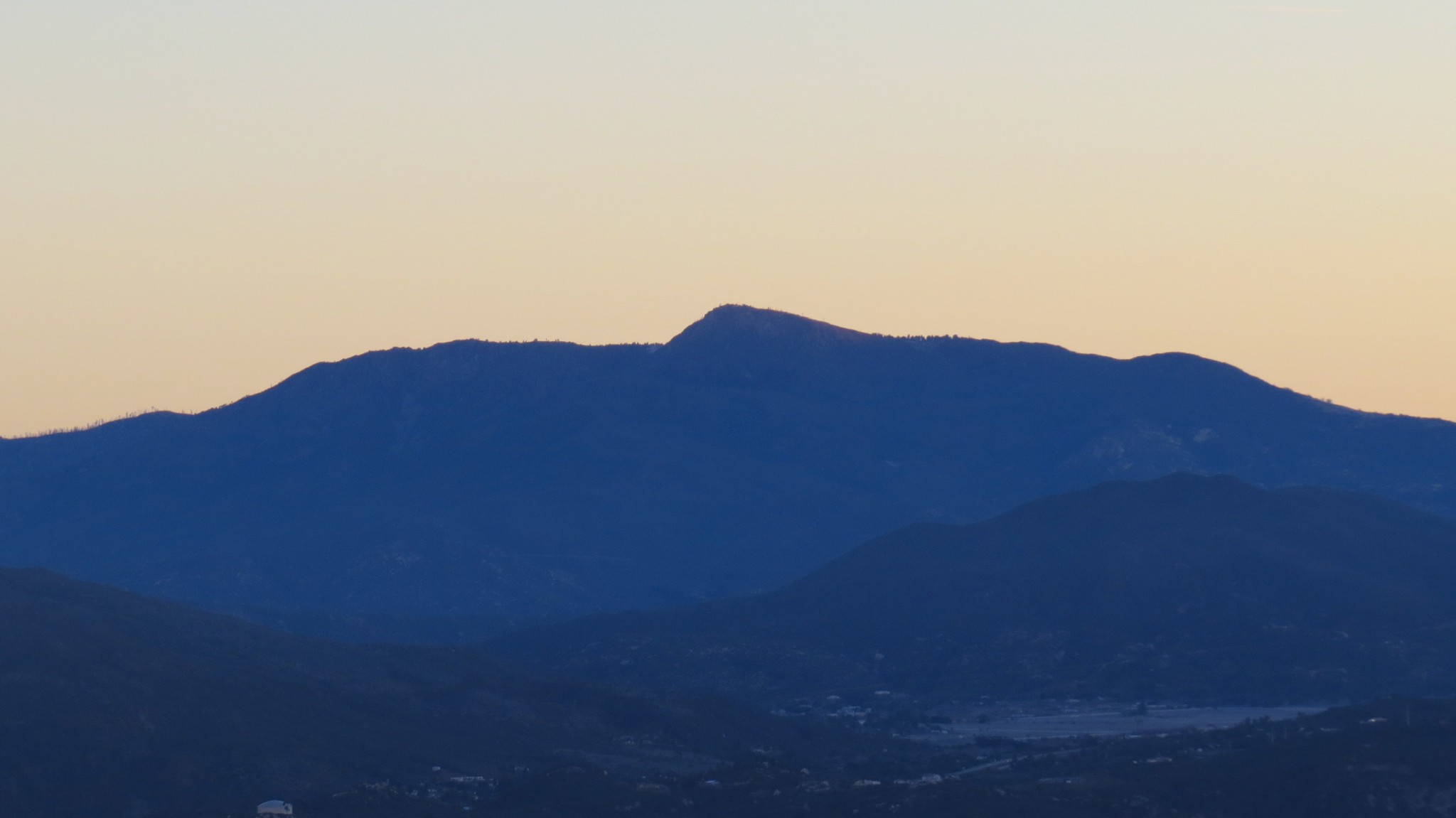 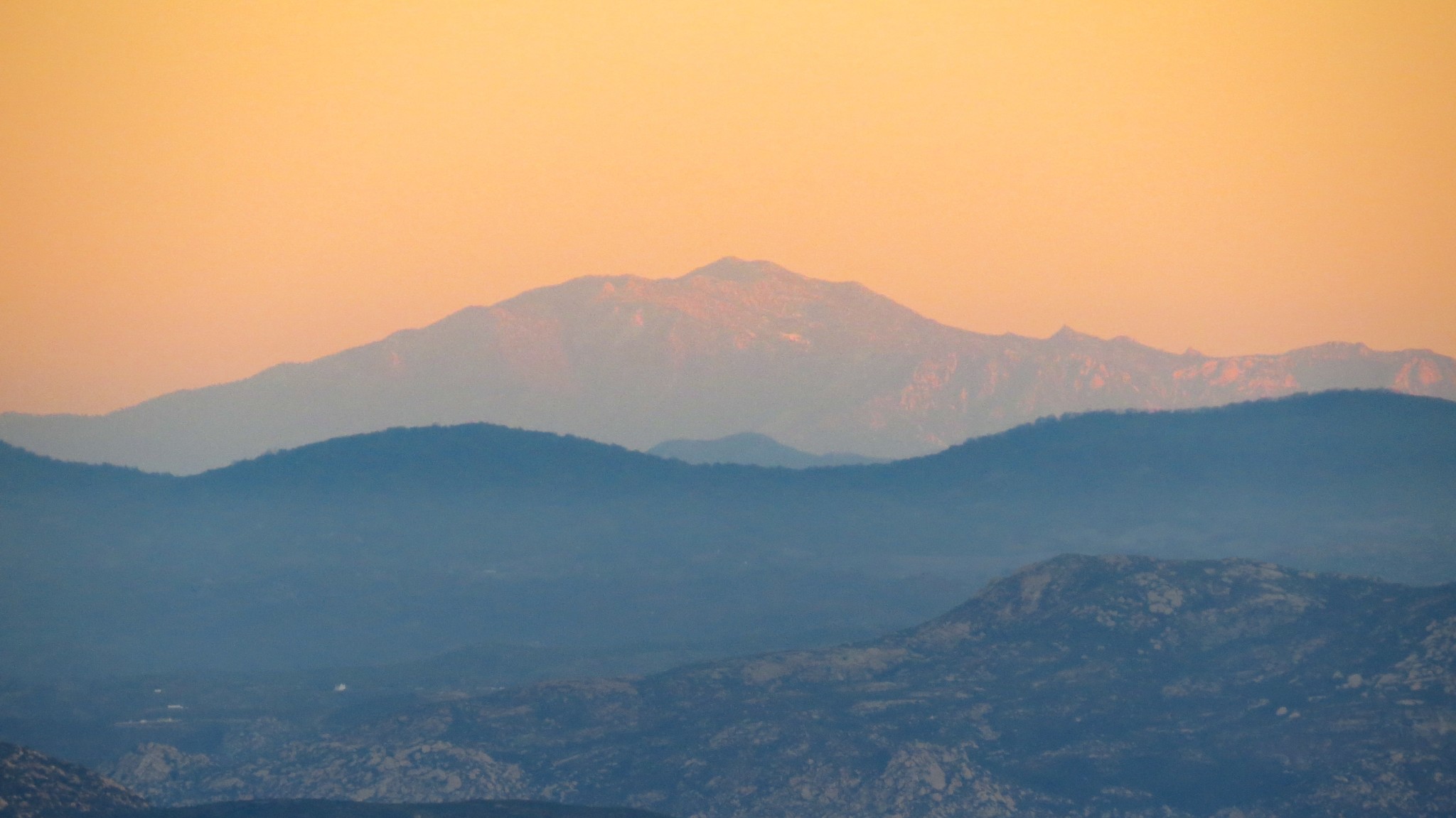 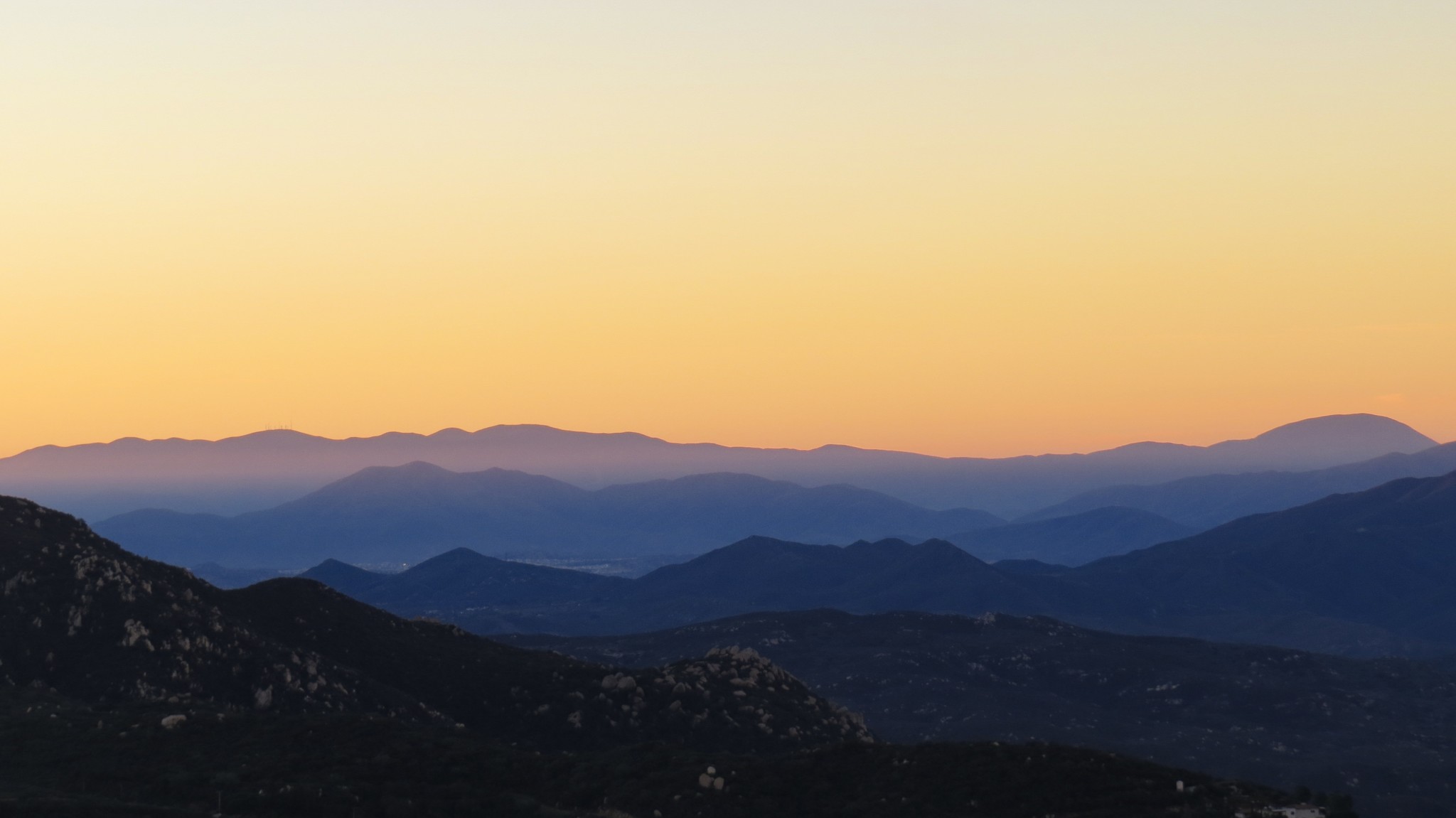 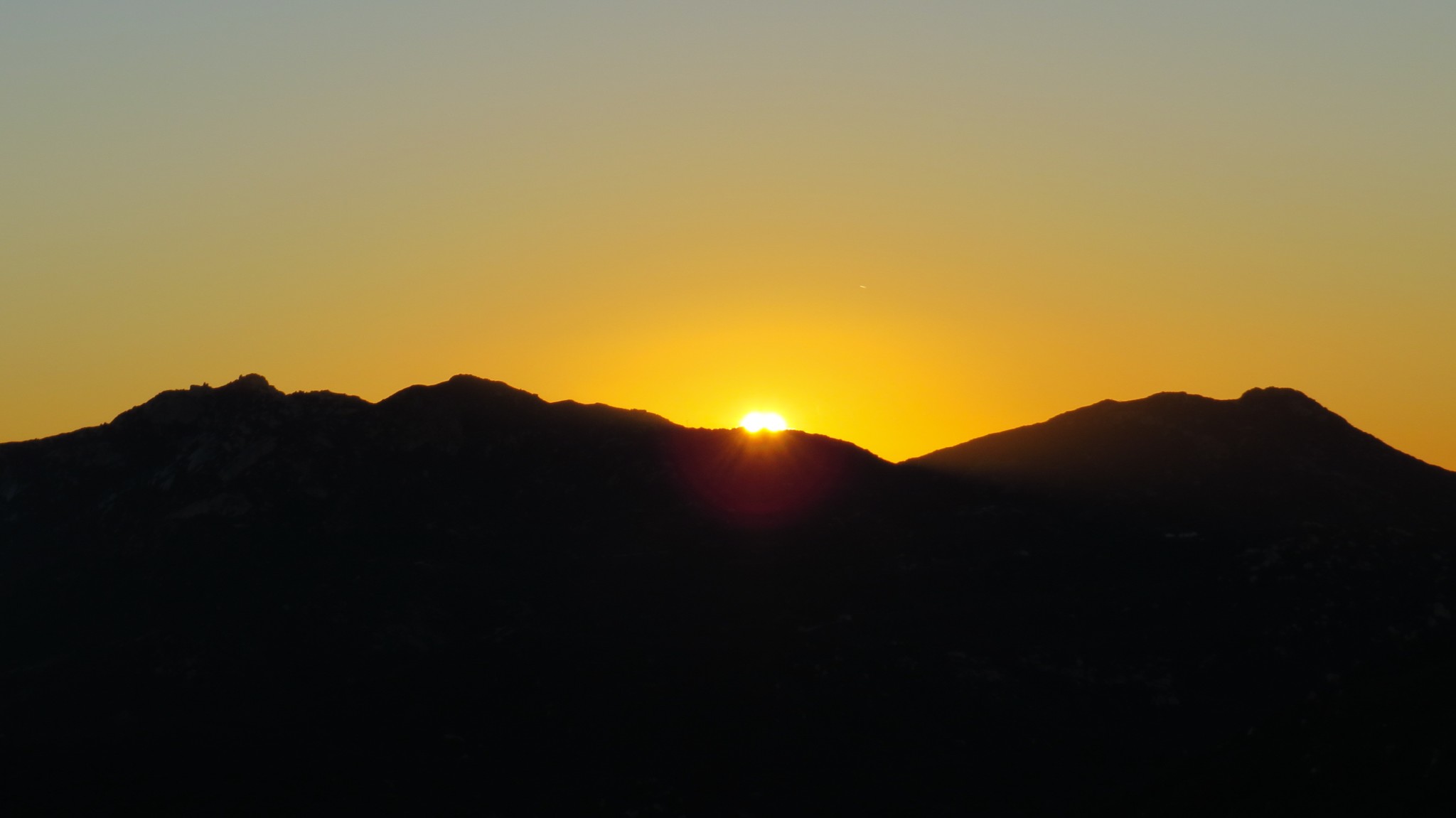 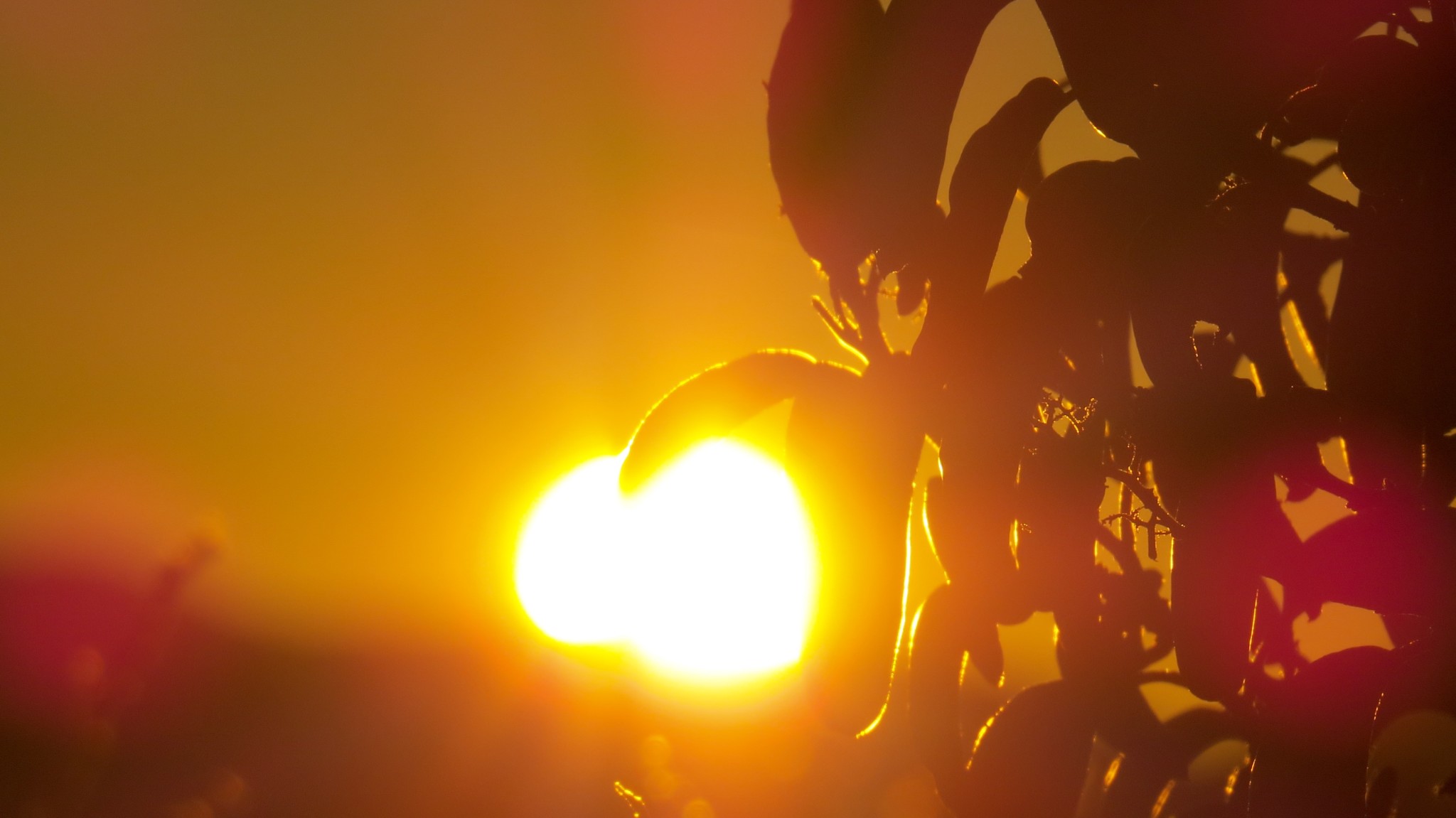 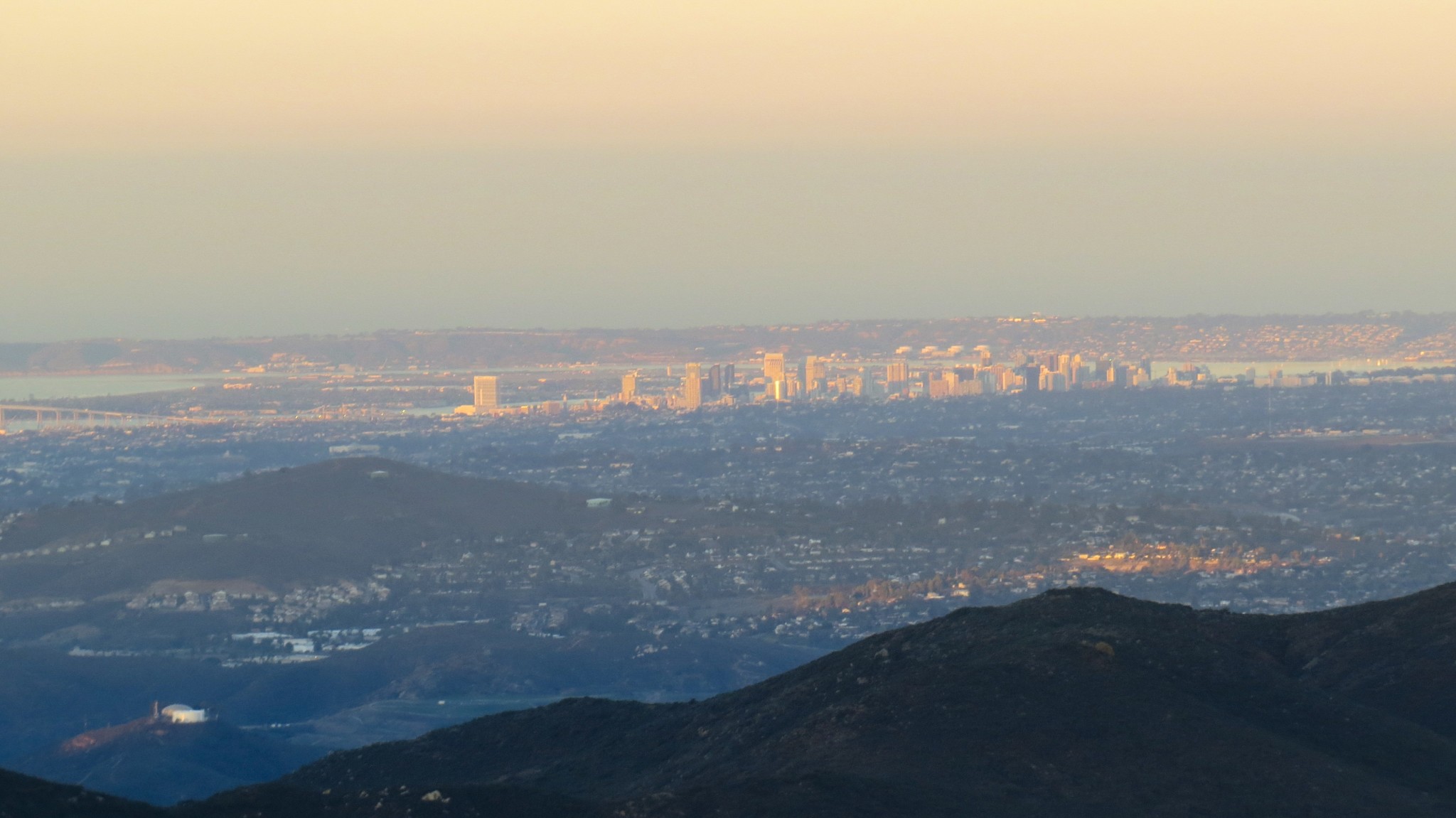 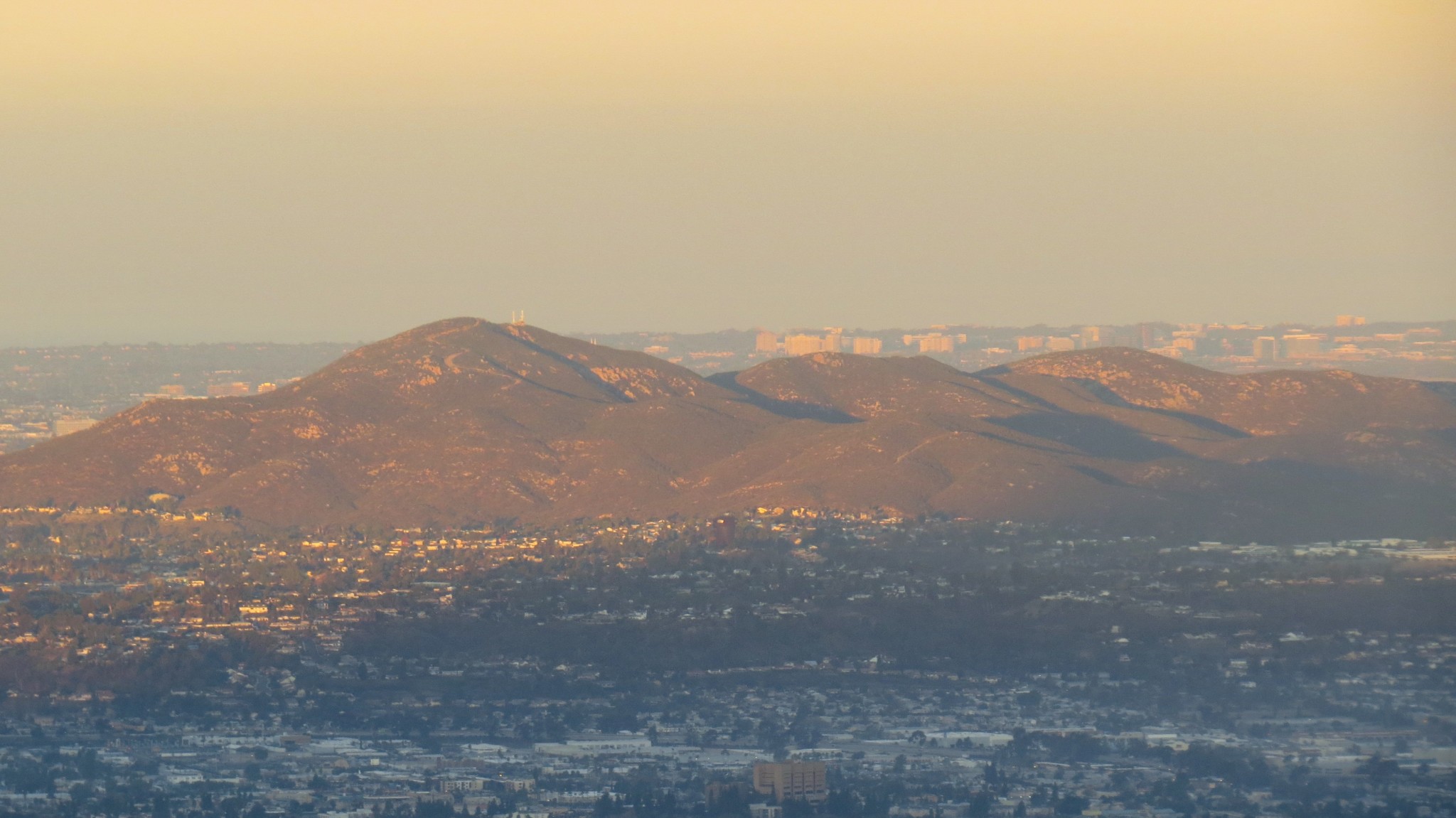 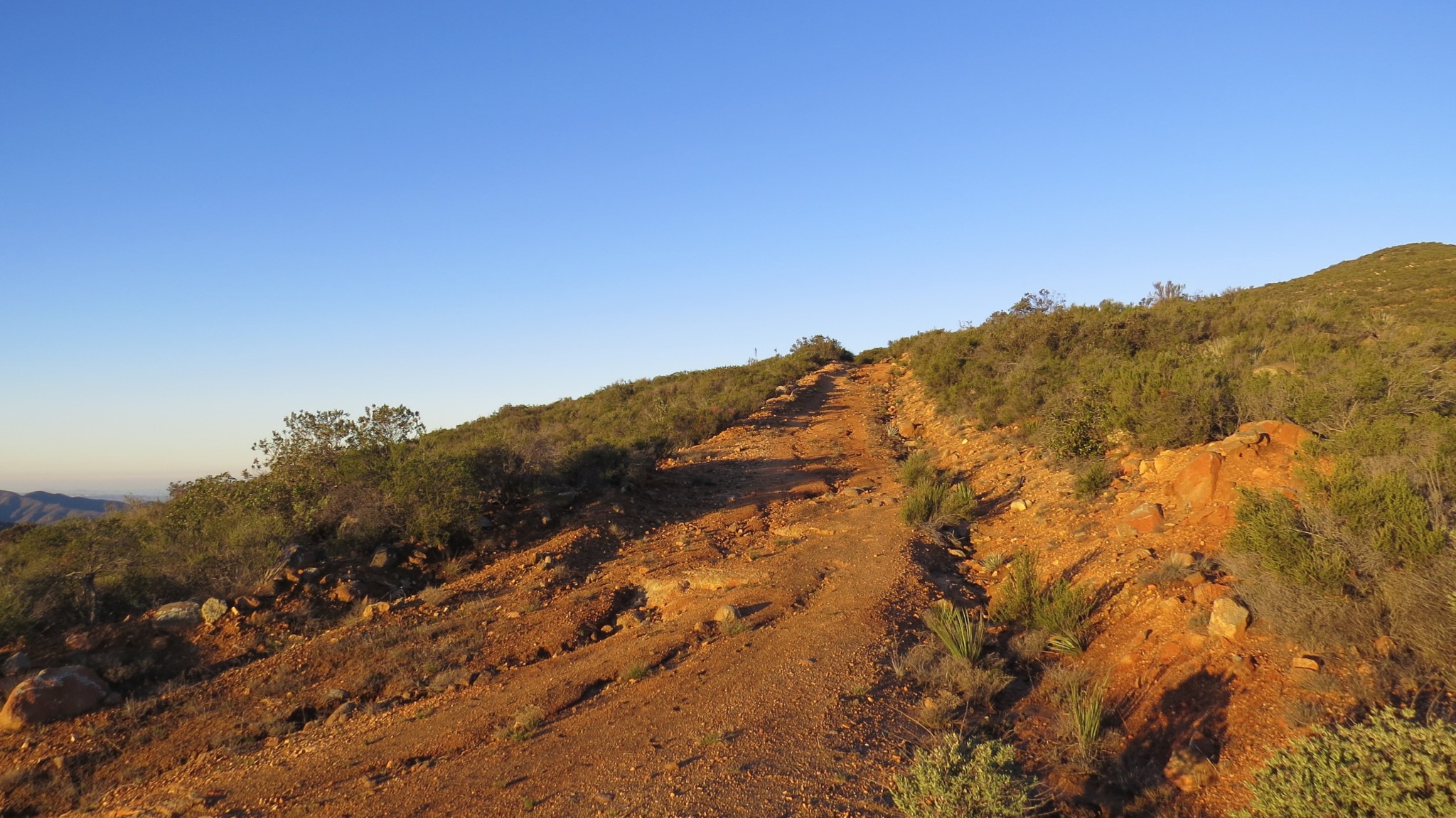 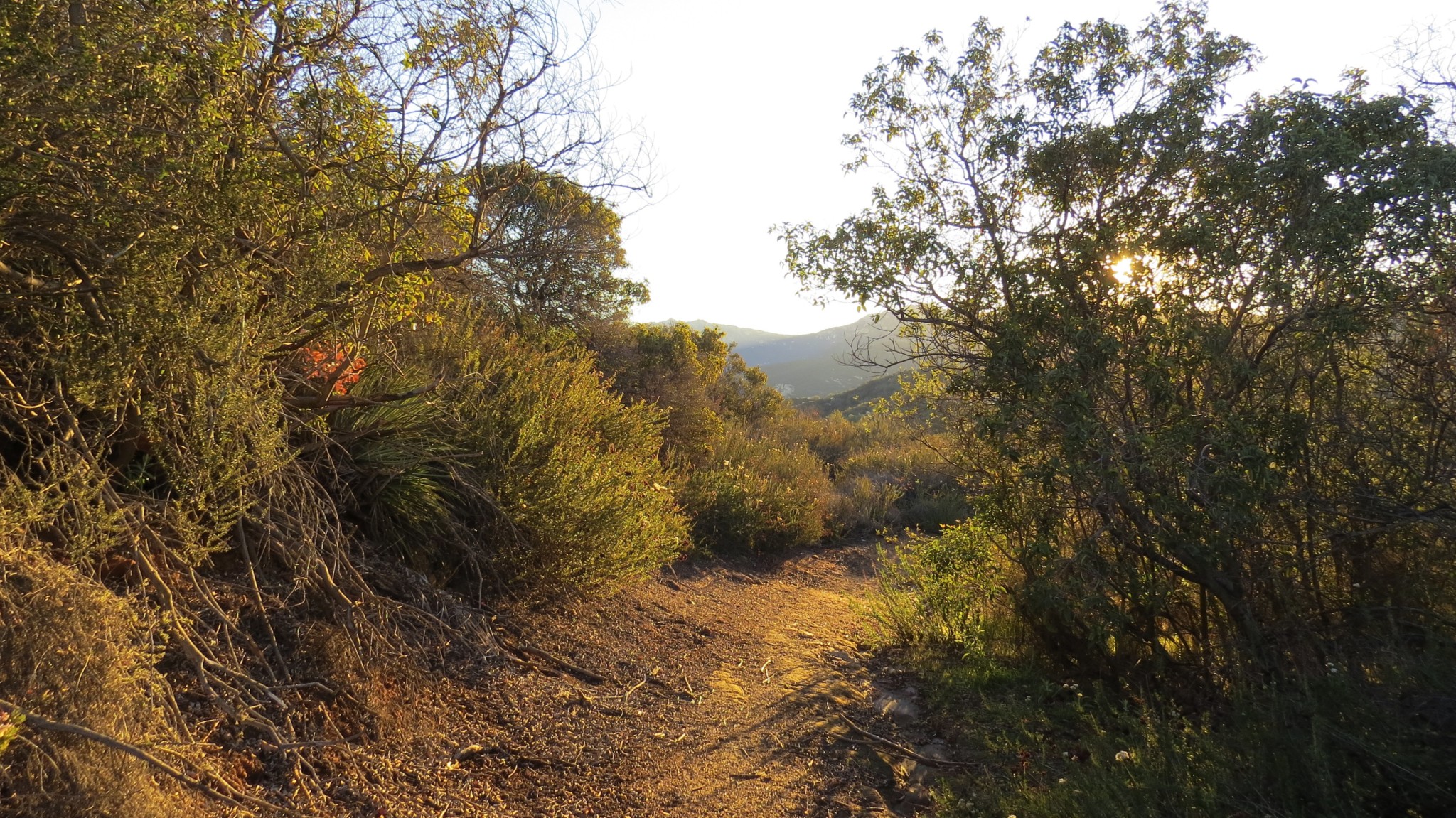 The trail follows the rutted remains of an abandoned jeep trail. While the route is not difficult to follow, some small-scale route-finding is necessary to make sure you don't end up falling over a lot.

The nearest campground is at Lake Jennings

From I-8 in La Mesa, head south on CA-125 for 1.7 miles, and take the exit for CA-94. After 0.3 mile, stay in the left lane to turn onto Spring Street and then turn right to enter CA-94. After the 94 freeway ends, turn right onto Campo Rd. (4.6 miles). Continue for 1.6 miles, and then turn onto Lawson Valley Rd. Continue straight onto Skyline Truck Trail and remain on this road for 2.2 miles until a junction with Lawson Valley Rd. Continue 2.2 miles to a gated dirt road marking the trail start.