One of the most beautiful mountain environments in San Diego County, the Laguna Plateau features expansive meadows, a dense forest of Jeffrey pine and black oak, a handful of ephemeral lakes, and impressive vistas. Cleveland National Forest’s Mt. Laguna Recreation Area features an intricate network of multi-use trails criss-crossing the plateau that connect with a variety of other trails creating a nearly infinite amount of variations on possible routes. Rising to the top of all of so many options, the double-looping Sunset Trail route, which samples all of the aforementioned natural features, is both a perfect introduction to the Mt. Laguna area as well as one of the loveliest hikes in the county. 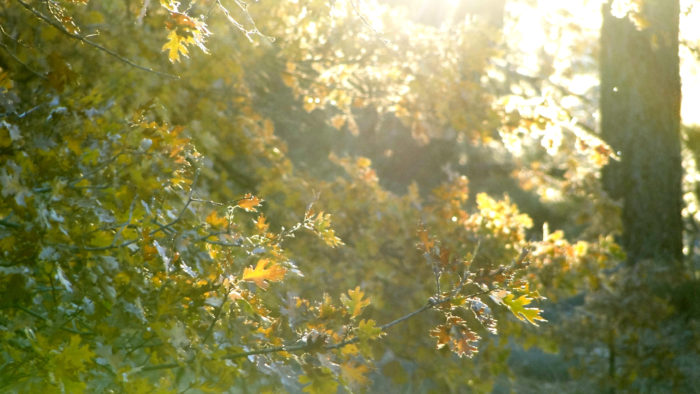 As an analog to the east-facing Sunrise Highway and Pacific Crest Trail on the eastern side of the plateau, the Sunset Trail follows a pair of gentle ridges that act as natural boundaries for the plateau’s western rim. As the trail’s name would implay, a handful of spots offer sunset views across the western half of the county. This route poses a nice analog to some of the spectacular sunrise viewpoints on the eastern side of the plateau along the Laguna Escarpment. 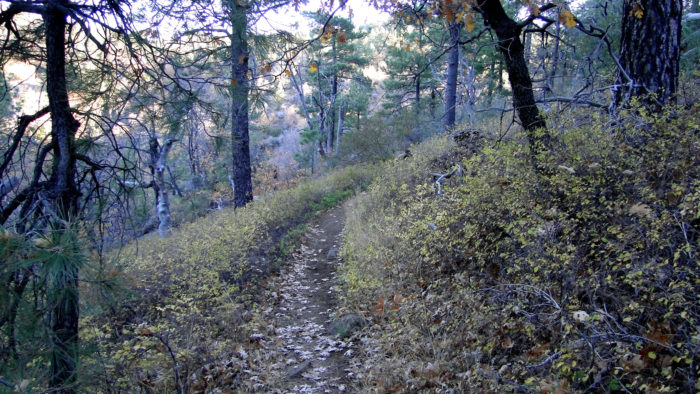 Although you can take this hike at any time, there are a few seasonal considerations that may make the hike better at certain times. Late October through November brings seasonal changes and cooler temperatures that cause the area’s black oaks, a deciduous oak tree, to change colors from green to gold. Conversely, springtime (April-May) bedecks the area in a carpet of green with a wide variety of wildflowers. Also during this time, you are more likely to find the lakes full to the brim. Occasional winter storms can bring snow to the plateau (along with half of San Diego), so if you know a storm is coming, you can time your trip to enjoy a brief period of snowfall.

Hikers can split this route into smaller chunks by taking only the first loop to Water in the Woods on the western edge of Laguna Meadow. This 3.2 mile loop is relatively flat and great for children or inexperienced hikers. For a longer, more comprehensive route that also includes a stroll along the shore of Big Laguna Lake, a side trip to some Native American features, and the best views on the trail, hikers can add the second loop for a relatively easy going 7 mile excursion. 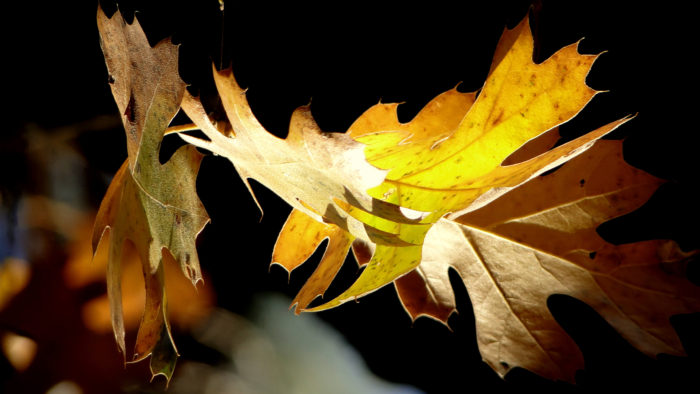 From the roadside trailhead (don’t forget to hang your Adventure Pass from your mirror!) just past the Meadow Information Kiosk, cross over the cattleguard, and head generally north along the well-traveled single track trail. After .1 mile, you reach a split in the trail. Either branch will connect at Water of the Woods, but let’s assume you are going left. The left branch continues north/northwest as it meanders over a pair of gentle rises. Keep in mind that if you are trying to hike this as a sunset hike, it might actually be better to take the right branch. This way, you can catch the handful of junctions while there’s light, and you can enjoy the sunset on the return leg. 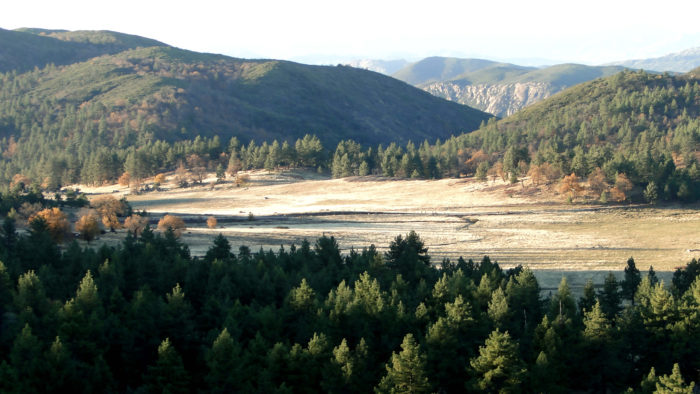 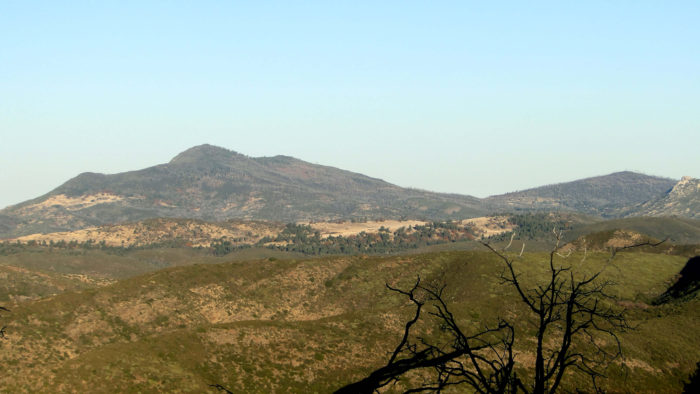 Initially, scattered pines and oaks form a pleasant woodland partially shading grasses and shrubs such as buckwheat and ceanothus before the trail approaches a boundary between forest and chaparral. At this boundary, a handful of protruding boulders allow you to get a good view west toward the coast. That large meadow to the southwest is Crouch Valley, and a collection of old friends such as Corte Madera Mountain, Morena Butte, Lawson and Gaskill Peak, and Viejas Mountain linger to the south and west. 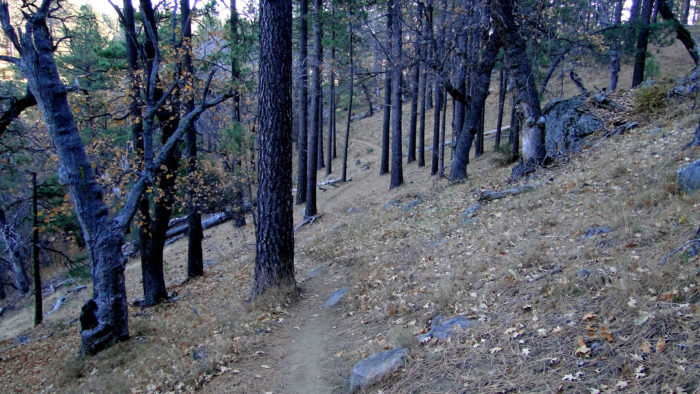 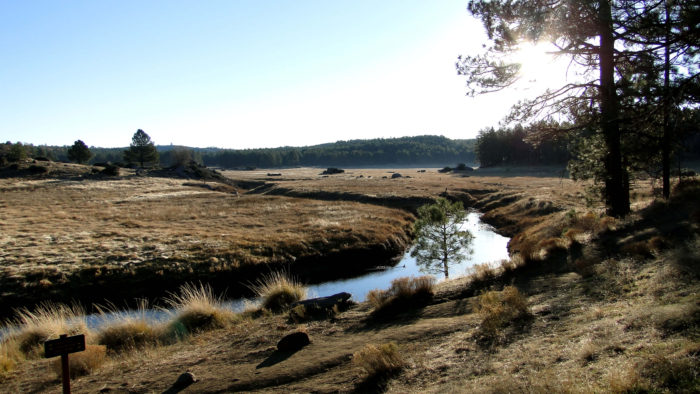 At .8 mile, the trail descends into a densely wooded ravine and curves to the east around an even deeper ravine toward Water in the Woods at . The evocatively named pond hosts a variety of waterfowl. This is a great feature to reward curious kids who may be able to spot tadpoles, frogs, ducks, and other critters around the pond. If you are opting for the shorter version of this route, the trail continue just to the right of the earthen dam impounding the pond. This trail will lead you back to Sunrise Highway.

If you’re looking to take the longer route, wrap around the pond by following the trail along the dam. A junction on the north end splits the sunset trail for the second loop. Again, you can choose either route you want, but I’m going to stick to describing the route clock-wise. Turn left at the junction and begin a gentle climb that leads first west and then north up the slope a ridge defining the west end of Laguna Meadow. A similar mixture of chaparral on the west and pine/oak woodlands on your right continues to please the senses, and a handful of viewpoints survey the western half of the county. 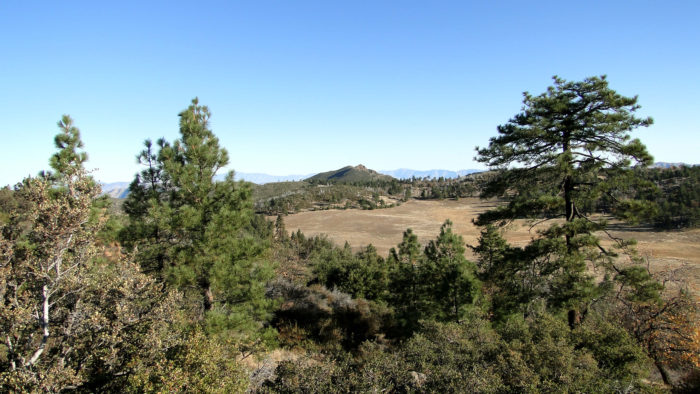 At 3.1 miles, the trail reaches its high point next to an outcrop marked 5798 on the topos. From this outcrop you not only get views to the west but also views east across the plateau toward antennae studden Monument Peak and the Laguna Crest. 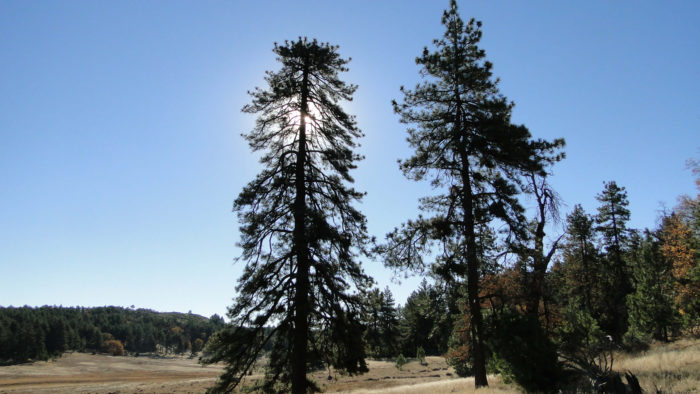 Beyond the high point, follow the trail downhill to a junction at 3.7. Make a hard right to head south along the edge of Laguna Meadow. Several massive Jeffrey pines stand sentinel along the meadow, and the shimmering waters (or dry bed) of Big Laguna Lake appears as you progress. Big Laguna Lake itself is a natural feature, but a low earthen dam at the south end has improved the depression’s ability to hold water for cattle that pasture here during the summer. 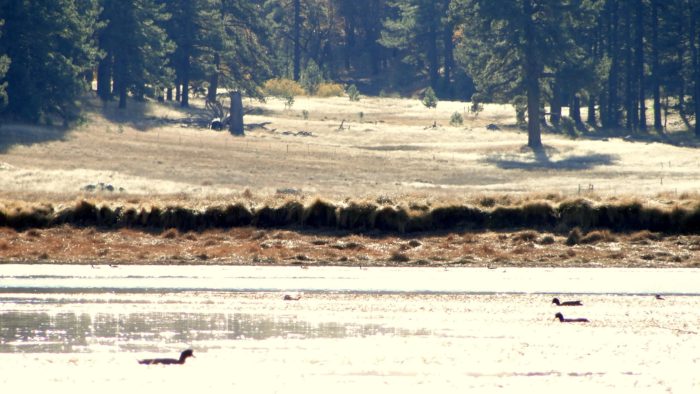 At 5.3 miles, you reach a junction with a trail heading east across Big Laguna Lake’s dam. Keep right at the junction as the trail curves to the west to return to Water in the Woods. About .1 mile past this junction, keep your eyes peeled on your left for a large, flat granite rock pock-marked with circular depressions. These round holes are morteros, or grinding mortars used by Native Americans prior to European settlement. The region’s indigenous peoples used Mt. Laguna and many of the other ranges such as the Cuyamaca, Volcan, and Palomar Mountains as summer residences. During fall, the various tribes would harvest the area’s prodigious acorns crops and haul them back down to the warmer coastal areas for use as a staple crop. 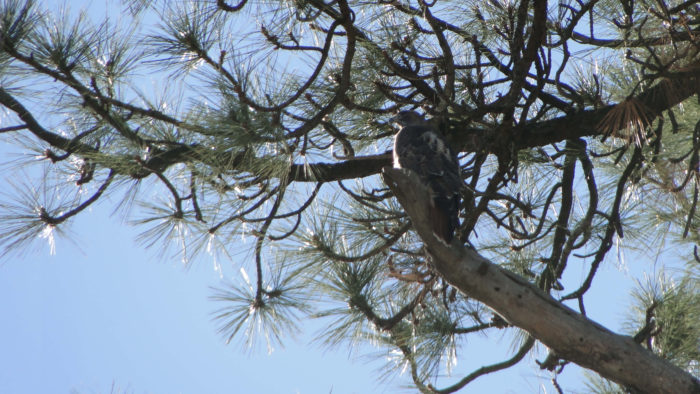 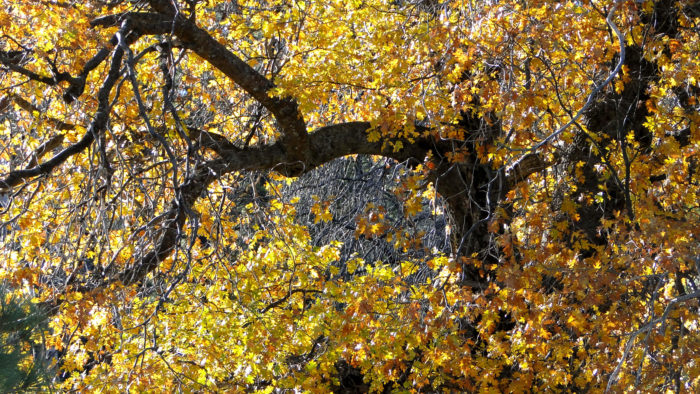 Beyond the morteros, you return to Water in the Woods. Turn left at both junctions on the north and south ends of the pond to continue along the edge of Laguna Meadow. Keep left at the next junction (6 miles) to follow the trail over a gentle saddle studded with more pines and oaks. On the other side of the saddle, the trail descends gently to return to the very first junction a mere .1 mile away from the trailhead. 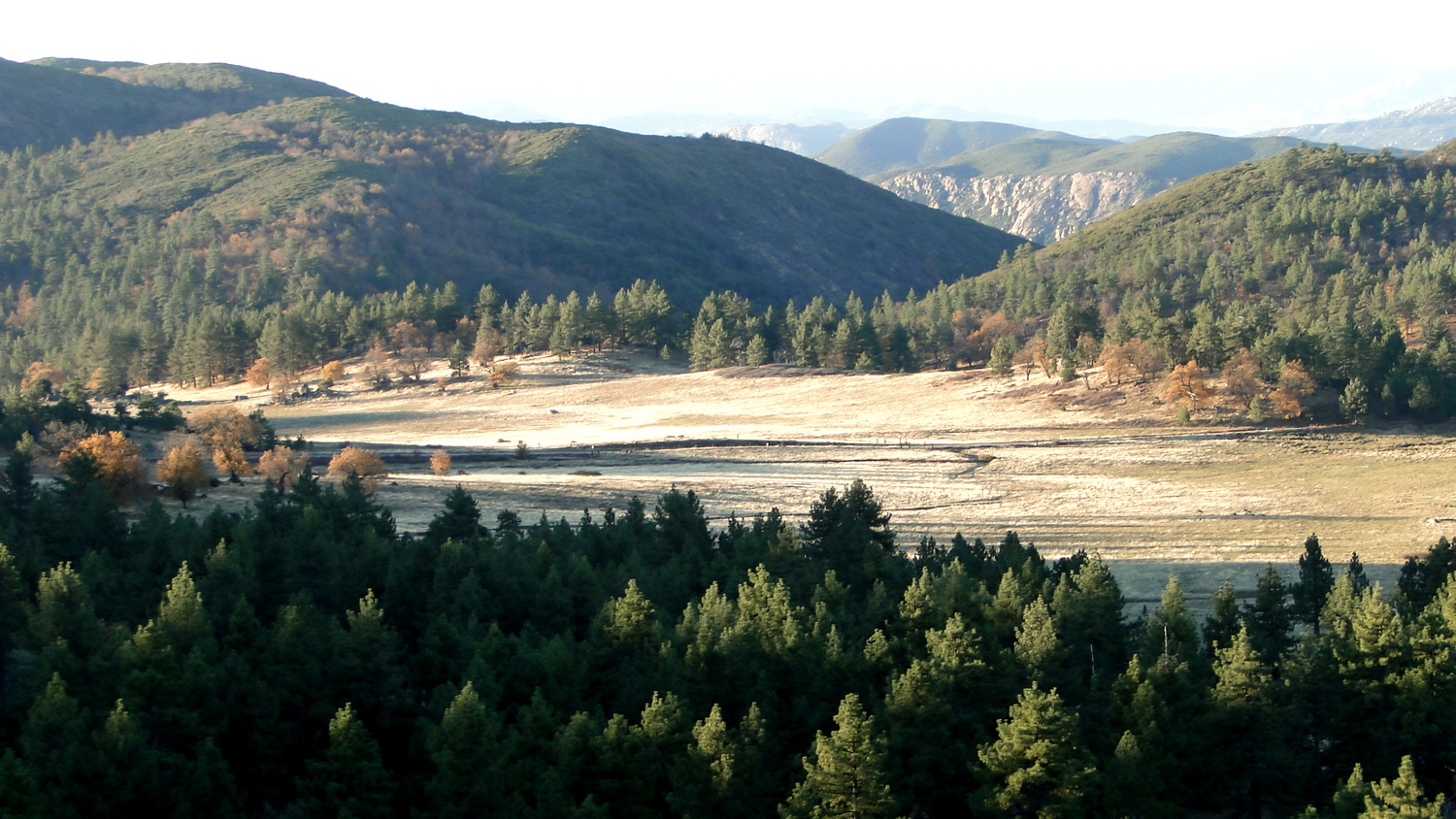 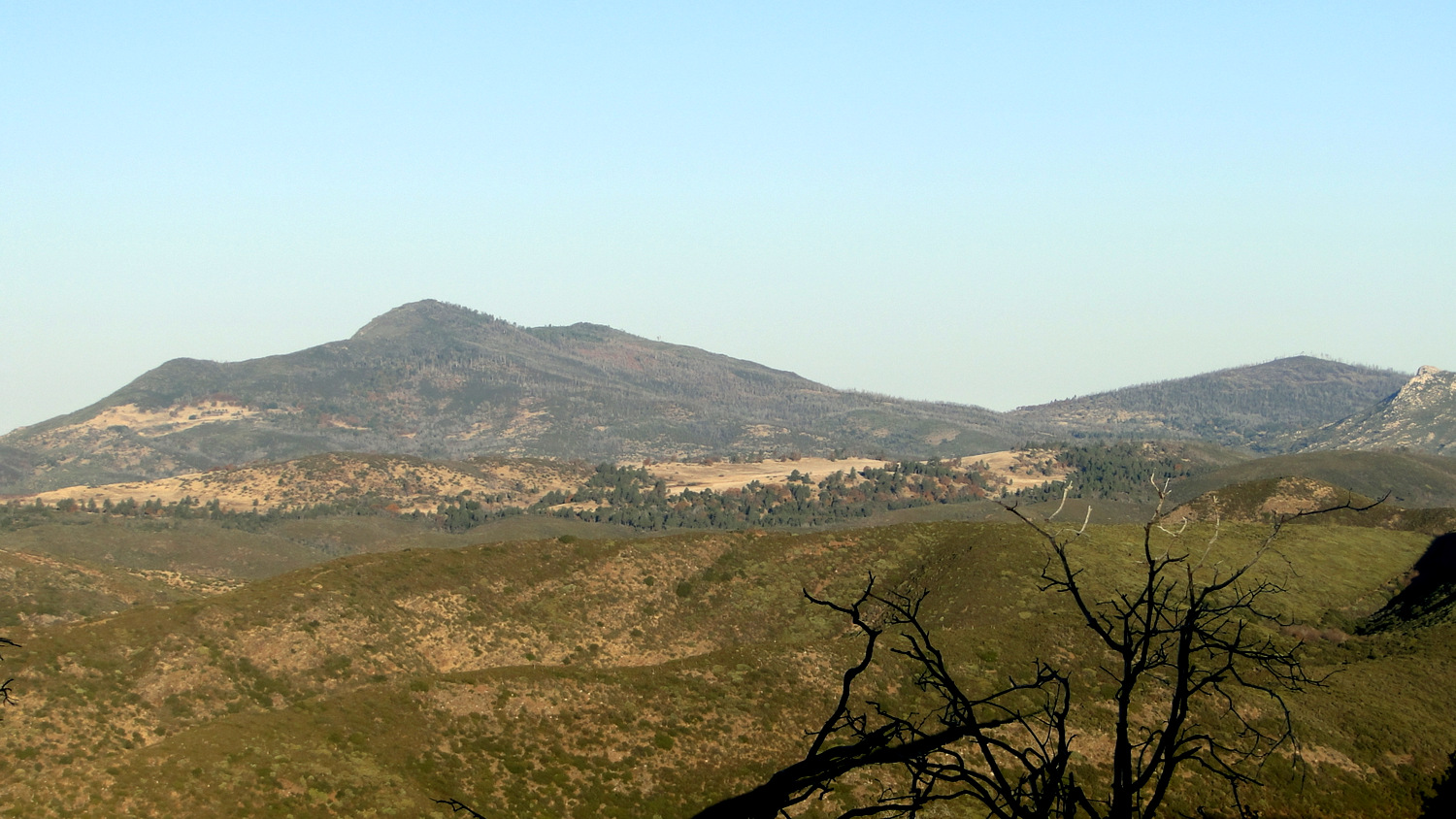 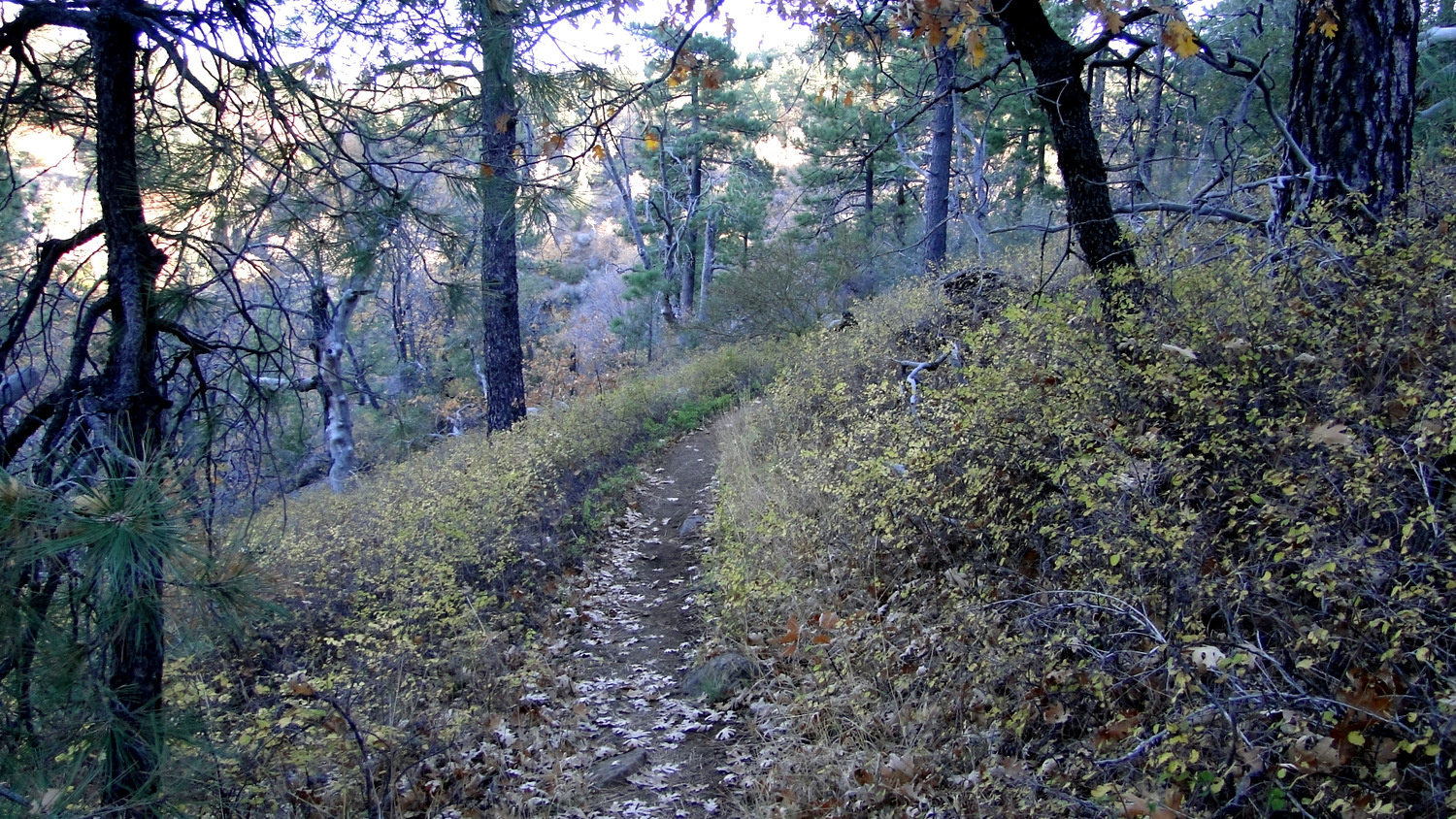 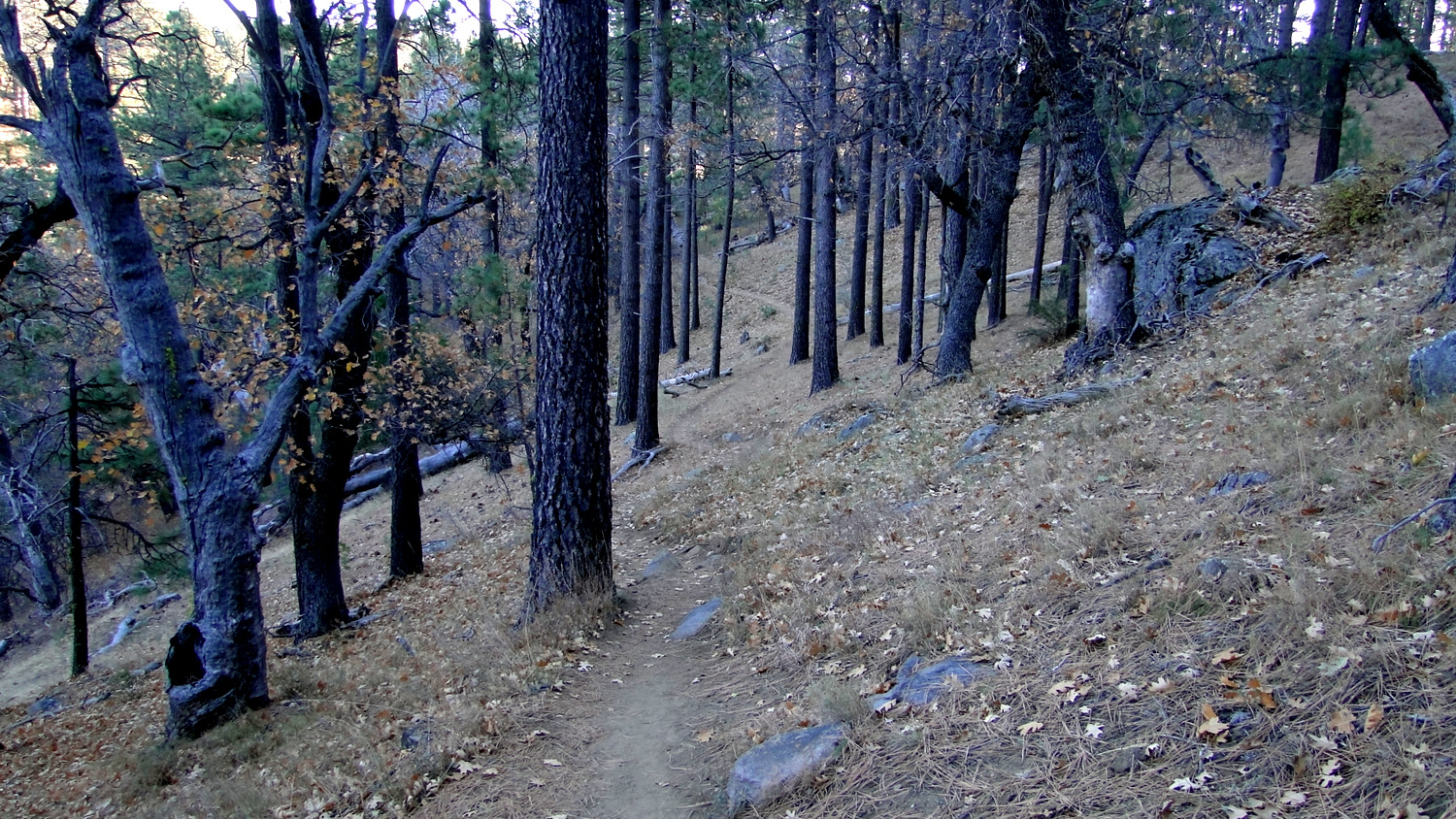 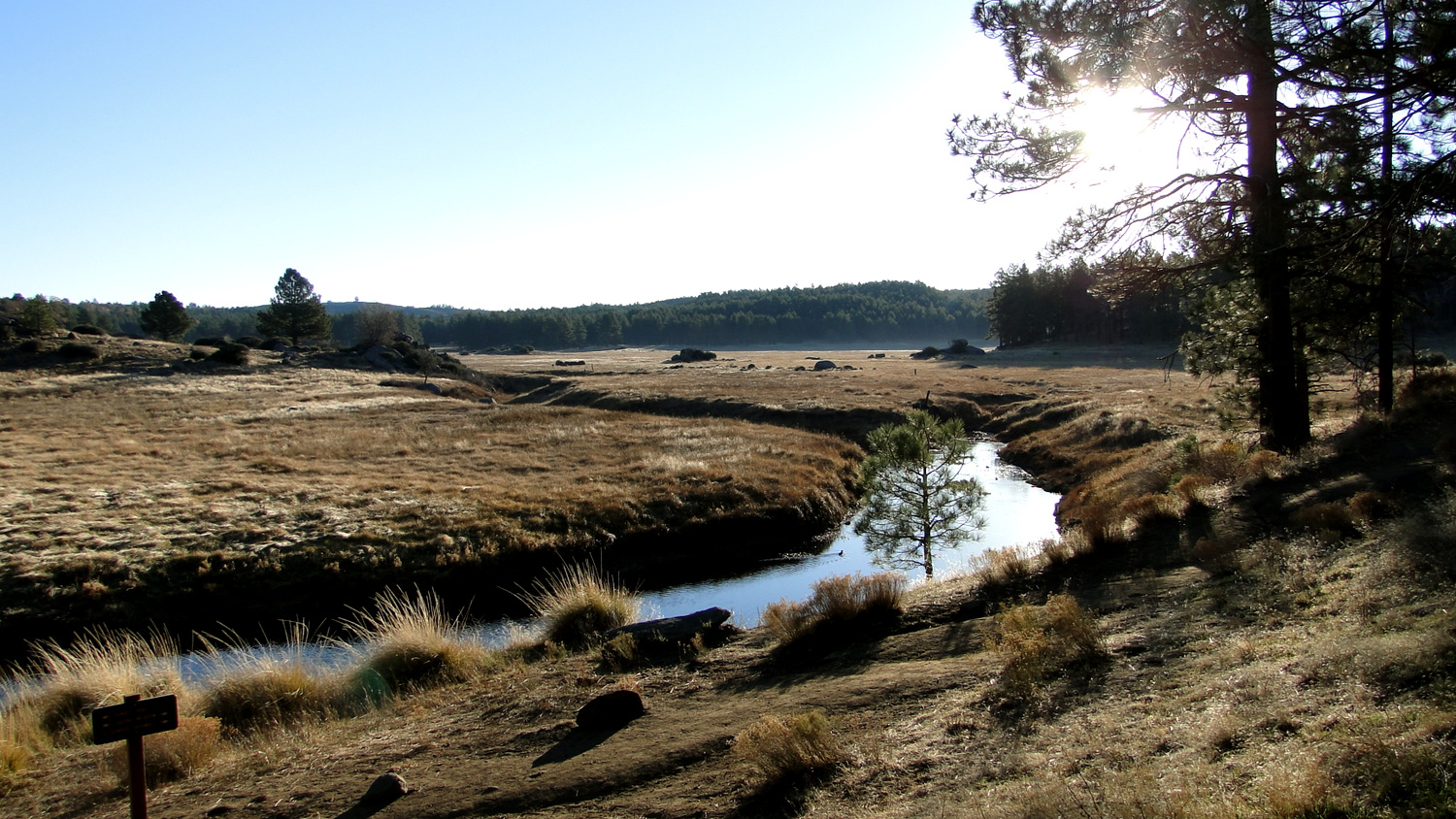 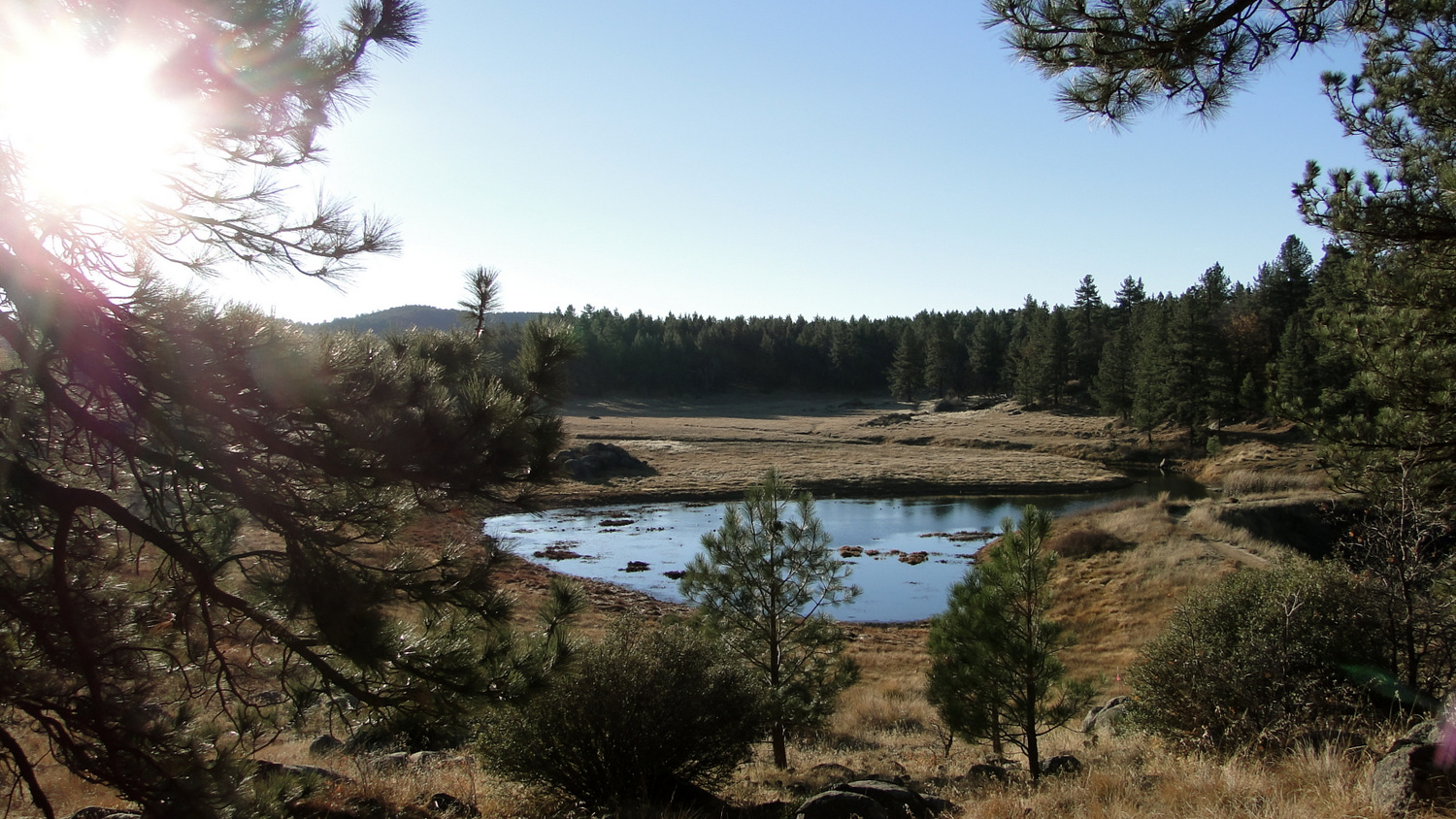 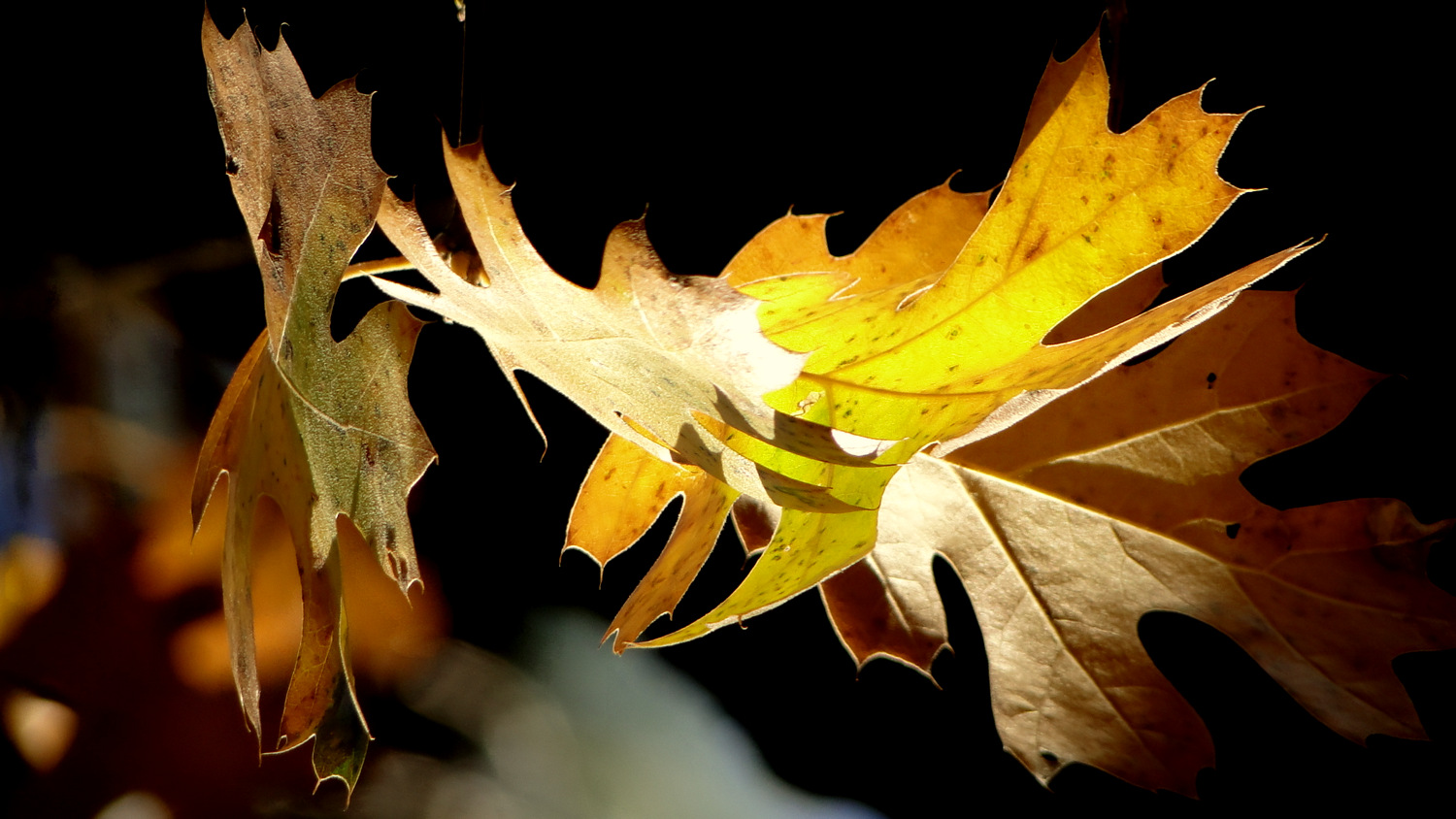 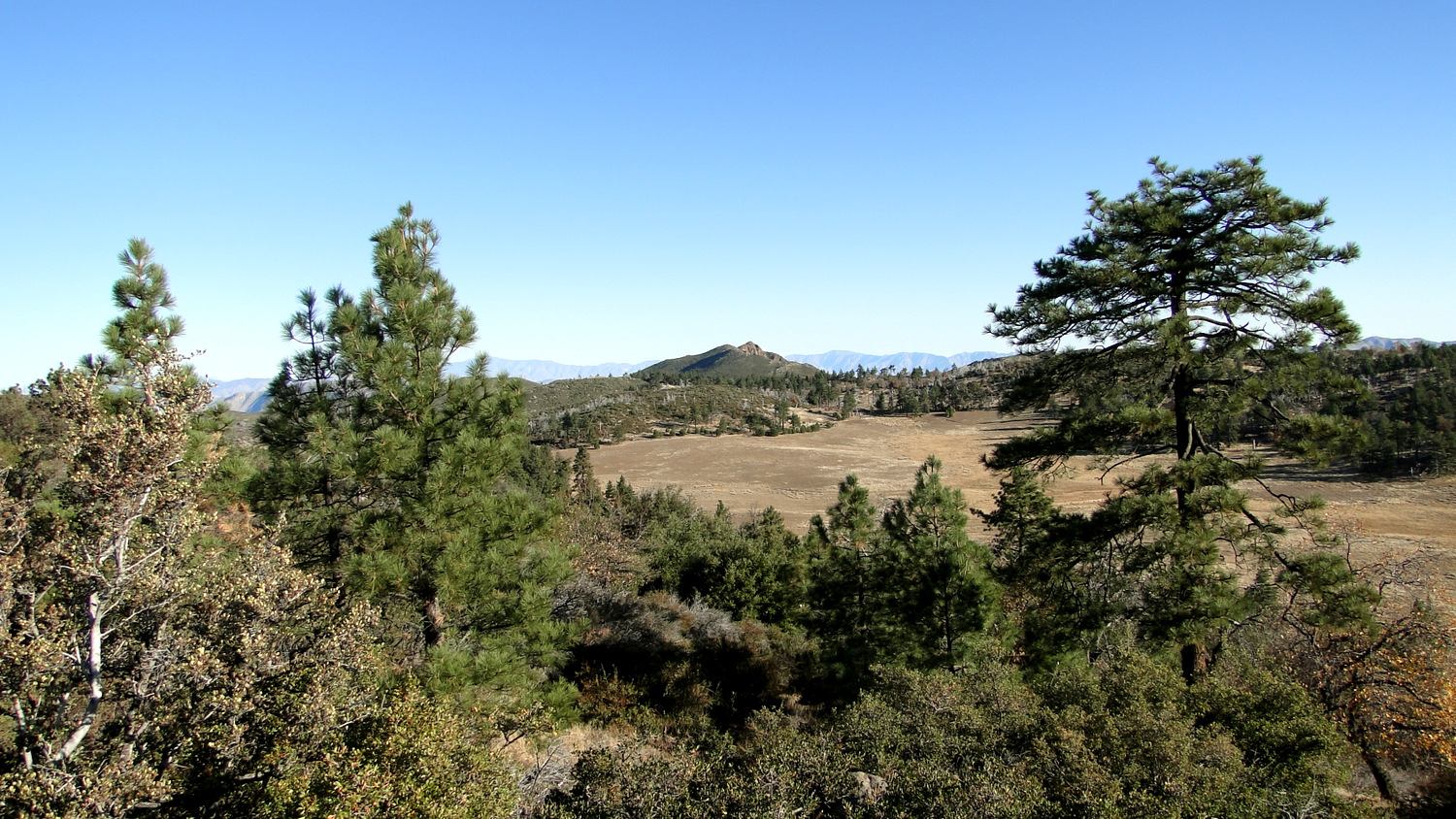 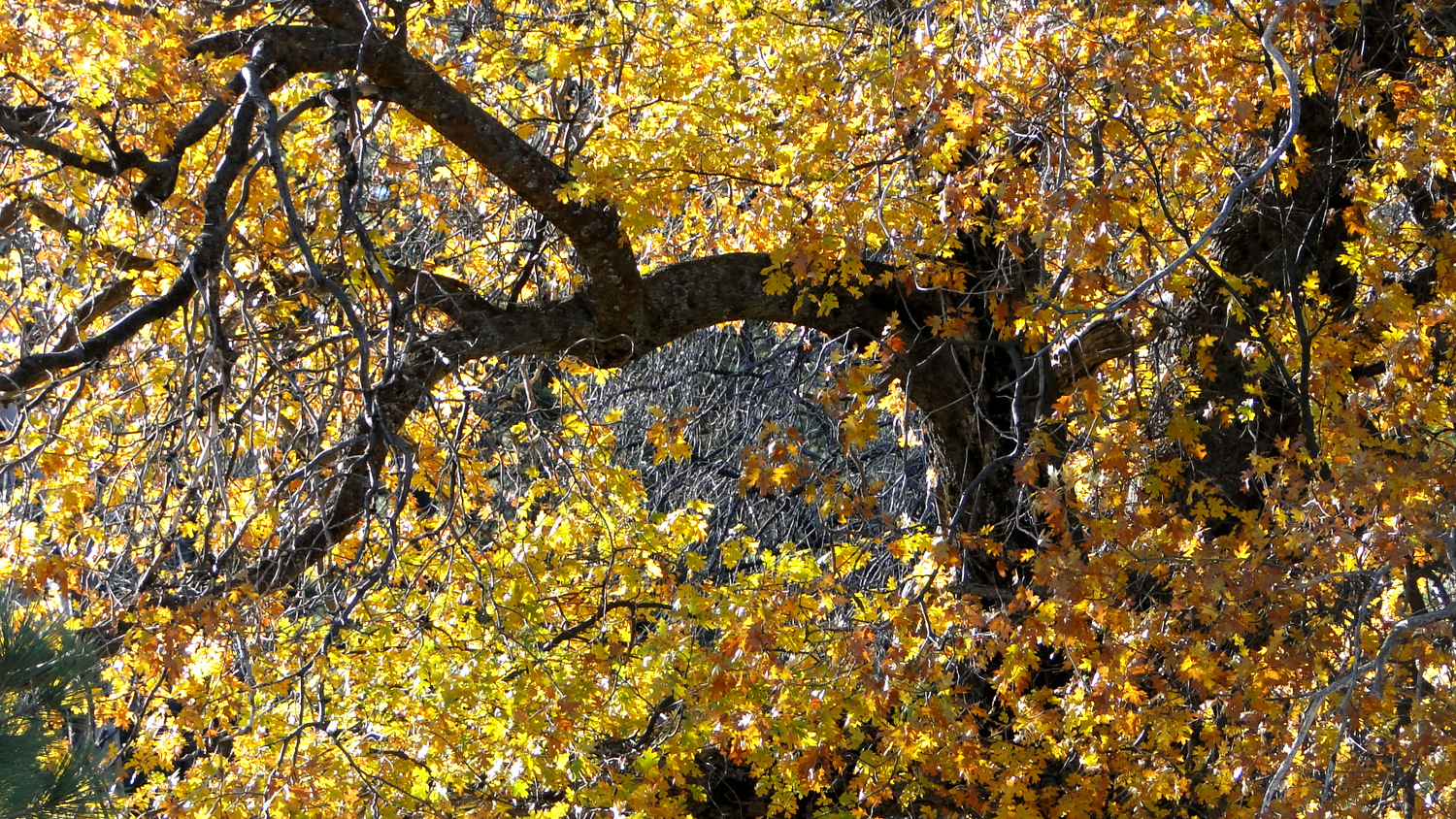 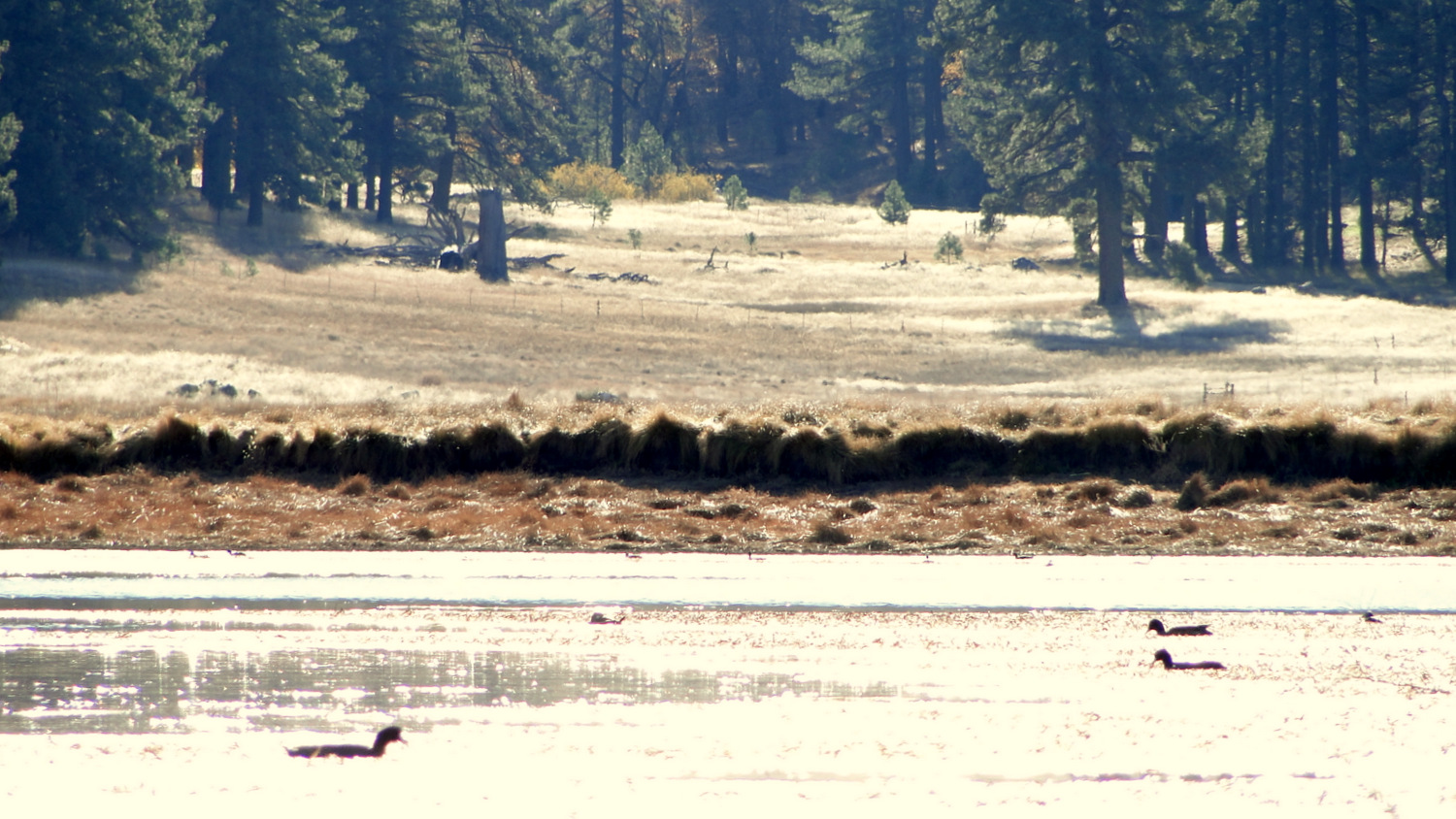 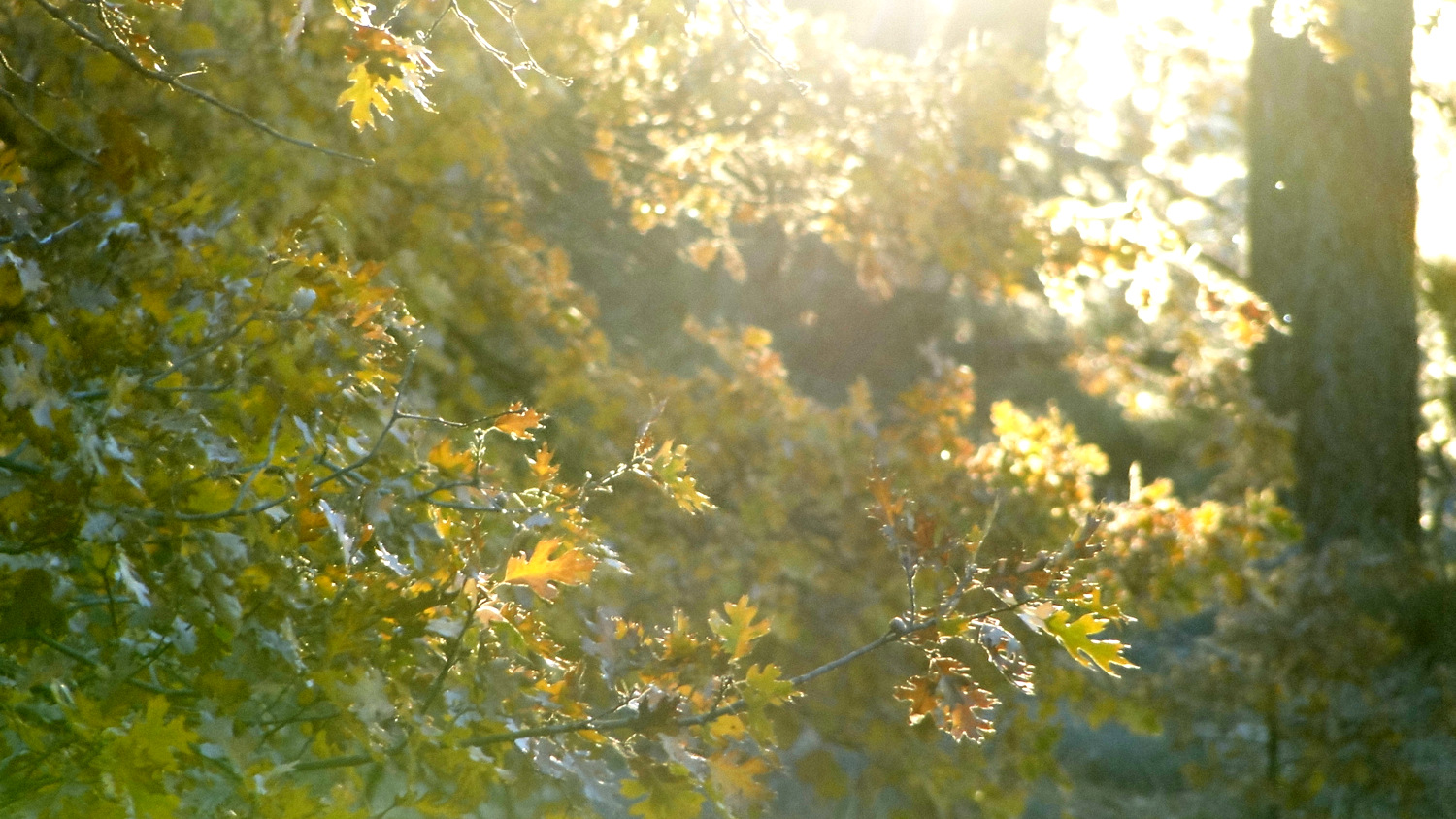 This very popular trail receives a lot of traffic and reasonable amount of maintenance. You should have no trouble following it, and there should be few obstacles.

This is a great family hike should you be camping at one of several campgrounds in the Laguna Mountains area. The closest and nicest campground in the area is Burnt Rancheria, which is open seasonally.

From San Diego, head east on Interstate 5 toward El Centro. Take the Sunrise Highway exit, and turn left to begin driving uphill toward Mt. Laguna for 5.6 miles. The Sunset Trailhead lies on the left side of the highway. Note that you need an Adventure Pass to park here.